Tropical disturbance with high chance of development moving through Caribbean

This disturbance poses no threat to the U.S. mainland at this time as all indications are that a strong blocking high to the north will force it right into Central America.

Following last week's catastrophic strike from Hurricane Ian, the FOX Forecast Center is now monitoring two systems in the Atlantic Basin, one of which developed into a tropical depression earlier this week while the other is expected to develop soon.

October ranks as the third-most-active month (behind September and August) for tropical activity in the Atlantic Basin, typically producing about two named storms each year, one of which becomes a hurricane. And every other October, on average, one of those hurricanes intensifies into a "major hurricane," achieving Category 3 or higher intensity on the Saffir-Simpson Hurricane Wind Scale. 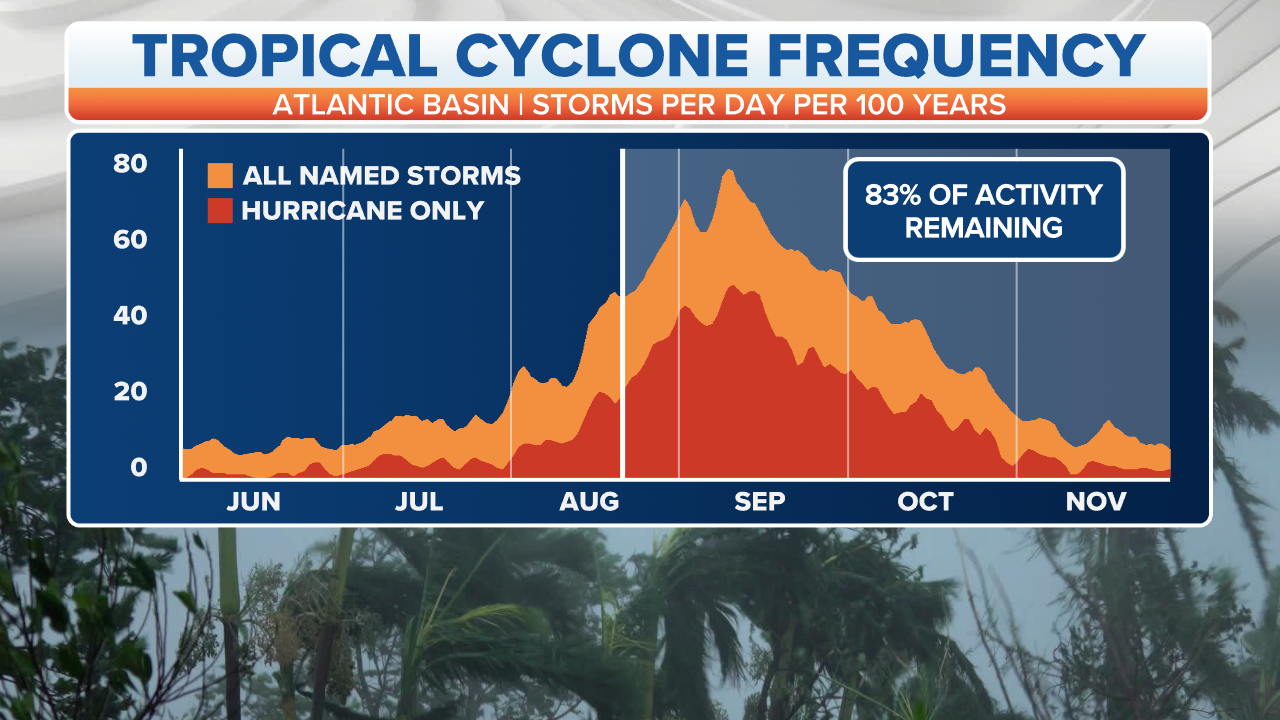 While the Atlantic hurricane season officially runs from June 1 to Nov. 30, Sept. 10 is the date when the most hurricanes and tropical storms have occurred in the historical records.
(FOX Weather)

Tropical Depression Twelve is one of the two systems roaming the Atlantic Basin. The other is still a tropical disturbance that's hugging the coastline of northern South America in the far southeastern Caribbean Sea.

Here's what you should know about these systems.

An overview of the tropics in the Atlantic Basin.
(FOX Weather)

Tropical Disturbance No. 1 (Invest 91L): In the southeastern Caribbean Sea

A broad and elongated area of low pressure centered in the far southeastern Caribbean Sea near the coast of Venezuela continues to produce an expansive area of showers and thunderstorms over the southeastern Caribbean islands, northern South America and adjacent waters. The FOX Forecast Center has dubbed this system "Tropical Disturbance No. 1."

The disturbance's location around the South American coastline could hamper its development over the next day or so, as it still lacks a well-defined center of circulation.

However, environmental conditions are expected to be conducive for development as the tropical disturbance moves westward at about 15 mph, likely spawning the formation of a tropical depression in the next day or two when the system enters the south-central Caribbean Sea.

"All indications are this is going to continue to move westward, and as it moves westward, it is going to encounter significant warmth in the Caribbean Sea," FOX Weather meteorologist Jason Frazer said.

The National Hurricane Center, which has identified this disturbance as "Invest 91L," gives it a high chance of development in the next two days – continuing a steady increase in the odds of development over the last 48 hours.

An "invest" is simply a naming convention used by the NHC to identify an area of weather that it is investigating for possible development into a tropical depression or tropical storm over the next several days. 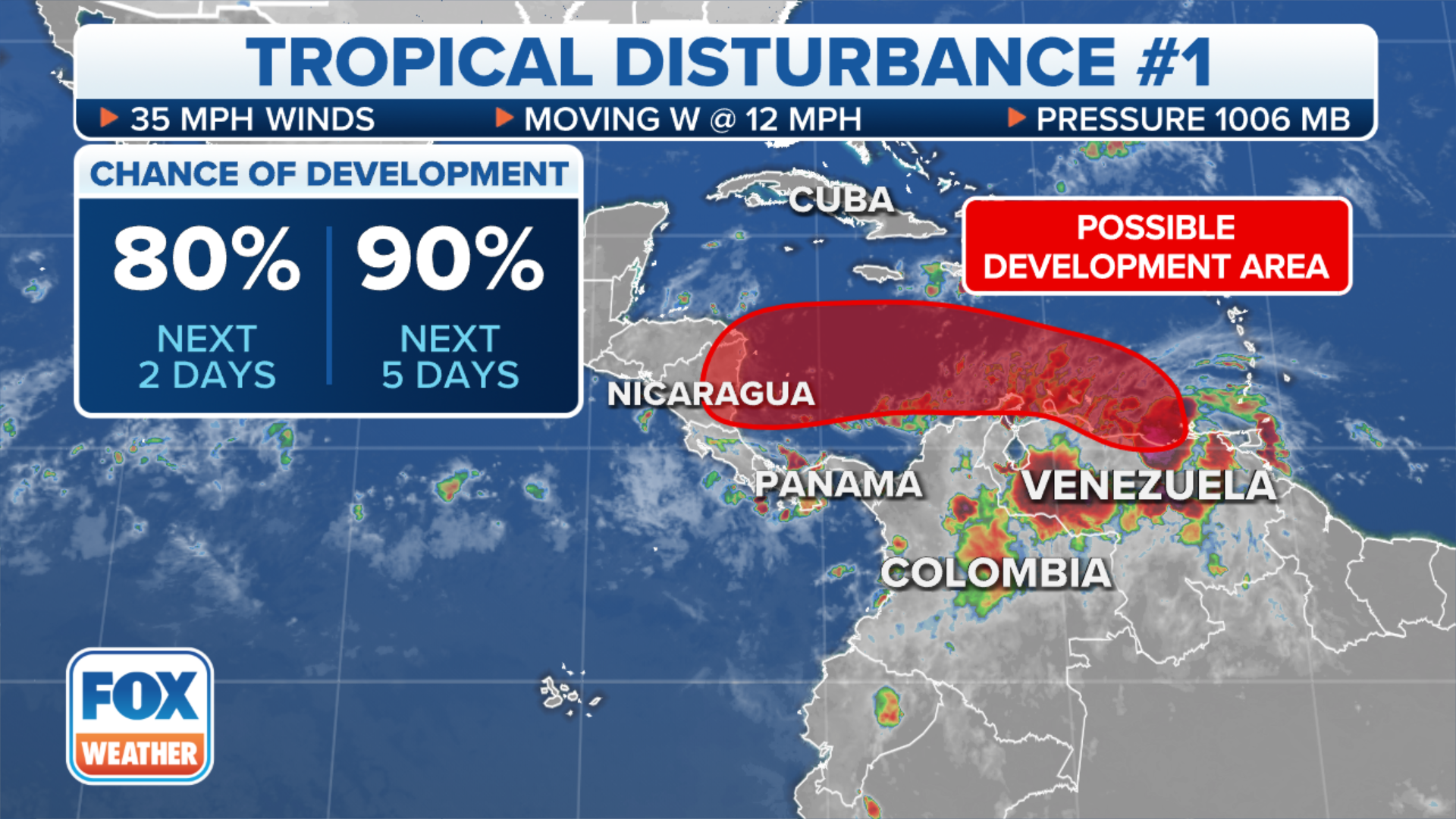 Tropical Disturbance No. 1 has a high chance of development in the next two days.
(FOX Weather)

Regardless of development, heavy rain with localized flooding and gale-force winds are expected over parts of the southeastern Caribbean islands, northern portions of Venezuela, including Isla Margarita, the Guajira Peninsula of Colombia and the so-called ABC island chain of Aruba, Bonaire and Curaçao over the next day or two.

Interests in those locations, in addition to those in Central America, should continue to monitor the progress of Tropical Disturbance No. 1 (Invest 91L) as it heads westward.

According to the FOX Forecast Center, additional strengthening is expected as the disturbance moves westward over the southwestern Caribbean Sea and toward Central America from late Friday through Sunday.

An Air Force Reserve Hurricane Hunter aircraft is expected to investigate this tropical disturbance on Thursday.

What was once known as Tropical Disturbance No. 2 or Invest 92L became Tropical Depression Twelve off the western coast of Africa on Tuesday.

Tropical Depression Twelve is centered more than 600 miles west-northwest of the Cabo Verde Islands. It is forecast to lose its tropical characteristics and become a remnant area of low pressure within the next day. 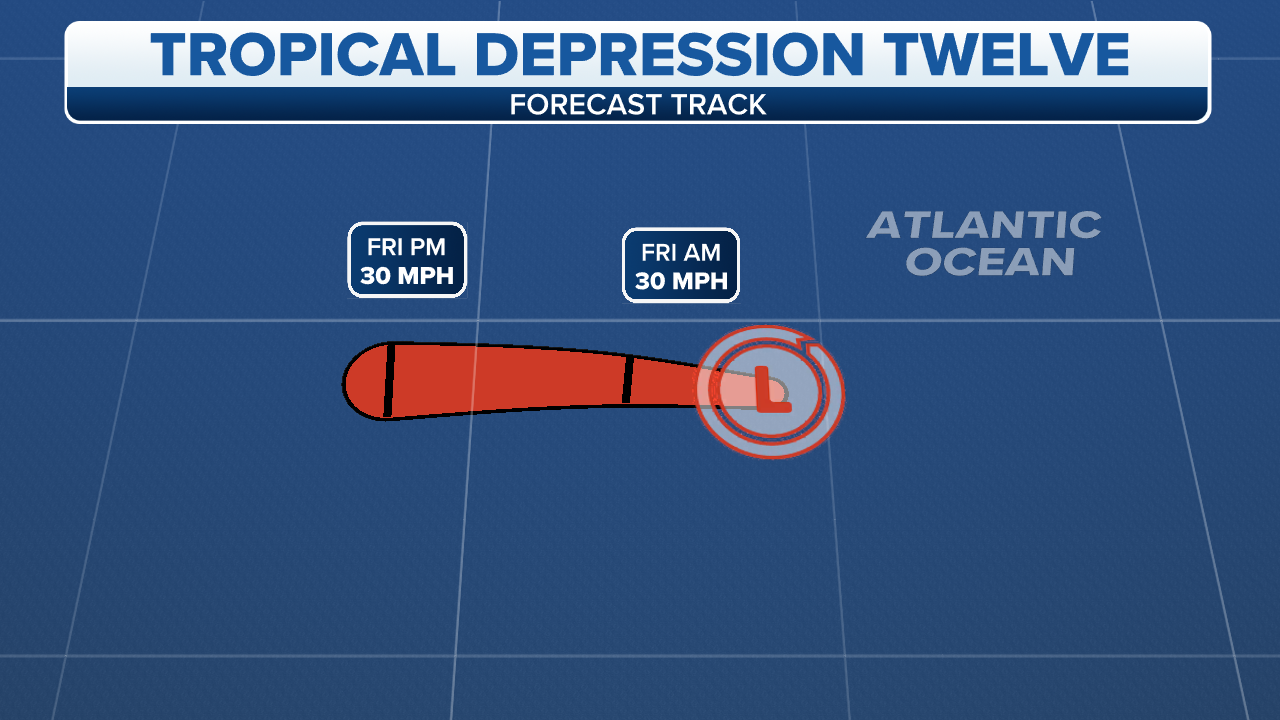 Will either of these tropical systems threaten the US?

A blocking high-pressure system is forecast to remain in place north of Tropical Disturbance No. 1 (Invest 91L), which is now moving over the southeastern Caribbean Sea.

Therefore, the FOX Forecast Center believes the disturbance will keep heading west into the south-central and southwestern Caribbean Sea rather than turn north toward the U.S., likely sending it on a path toward Central America.

CARIBBEAN DISTURBANCE IS LIKELY TO DEVELOP LATER THIS WEEK

However, the future of this system after it impacts Central America remains a bit uncertain.

"There are some models that are indicating that after it gets done here in the Caribbean that there may be a possibility that, as it moves westward, that it will take a slightly northerly track here, so this is why we're remaining very pessimistic about what could potentially end up happening here within about the next week or so," Frazer said.

The potential tracks of Tropical Disturbance No. 1 are shown on the map below. 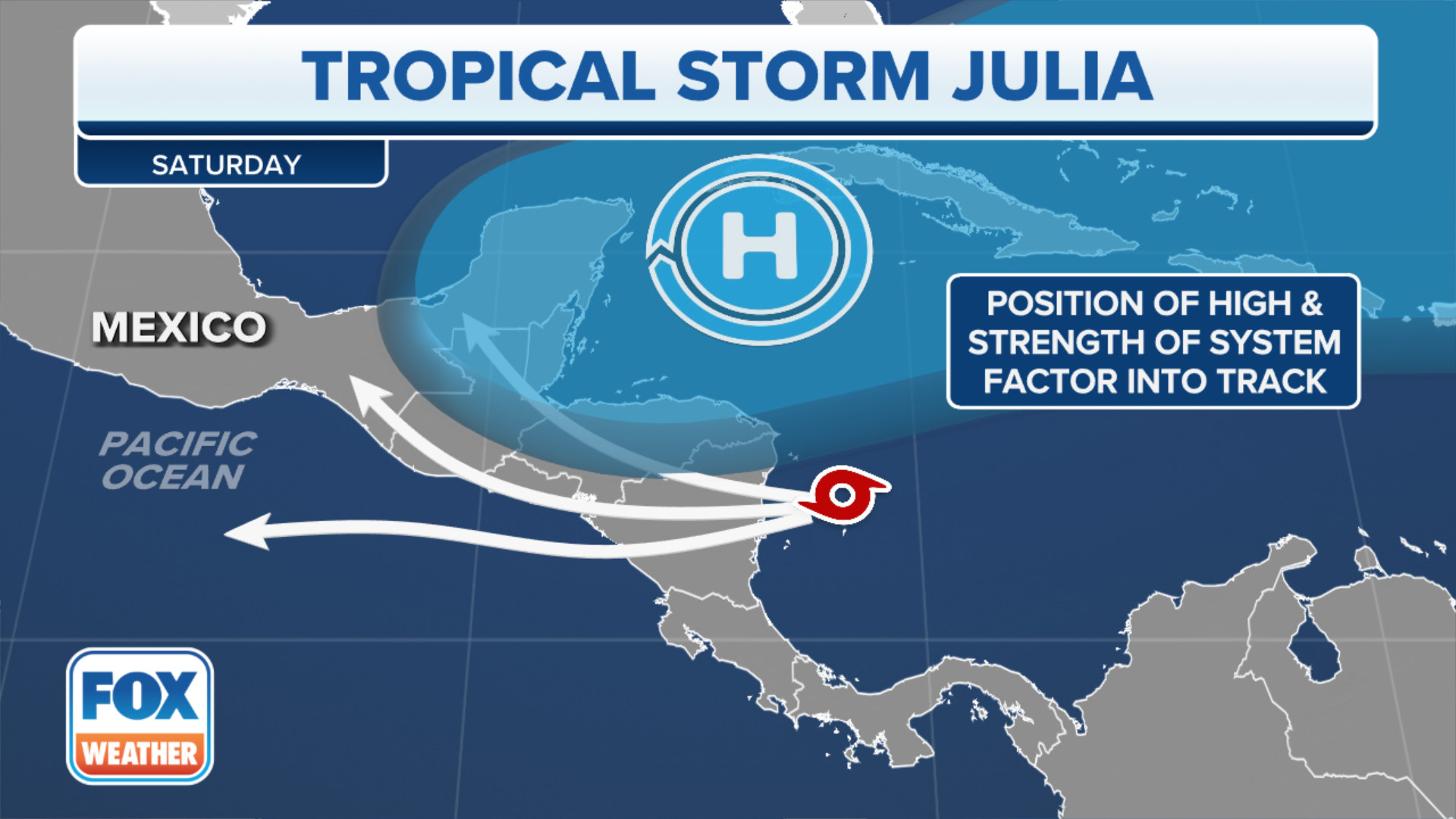 "One of the storm tracks has it going over the Yucatán Peninsula, and then going into the Gulf. That would be the worst-case scenario for us here in the United States," Frazer explained. "There is another indication that some of these remnants could end up just hanging out over southern Mexico, and then the most positive thing that could potentially happen is we'll see, because of that high pressure, it'll end up pushing that moisture out to sea."

Meanwhile, Tropical Depression Twelve in the eastern tropical Atlantic will pose no threat to the U.S., as the computer forecast models suggest it will move toward the west-northwest over open waters and remain far from the U.S. East Coast before dissipating within the next day.

The FOX Forecast Center will keep a close eye on both systems and alert you of any changes to the forecast.

The next system to become a tropical storm with winds of at least 39 mph will earn the name Julia.