Nicole getting in its last licks in Northeast

The remnants of Hurricane Nicole is currently dropping heavy rain over a 1,000-mile stretch from the Southeast to New England.

VERO BEACH, Fla. – Hurricane Nicole made landfall along the east coast of Florida early Thursday morning, leaving at least five people dead and millions in damage in its wake.

Nicole made landfall just south of Vero Beach, Florida, as a Category 1 hurricane at 3 a.m. Eastern on Thursday, Nov. 10, 2022.

Shortly after making landfall, Nicole was downgraded to a tropical storm as it began to weaken over the Florida Peninsula. It later weakened to a tropical depression over the southeastern U.S. on Thursday evening.

Homes destroyed by surf; hundreds of thousands in the dark

At least five deaths in Florida have been blamed on Nicole. Officials at the Orange County Sheriff's Office said two people were electrocuted by a downed power line early Thursday in Orlando, Florida. Two others were killed in a car crash on the Florida Turnpike. A fifth person went unconscious while trying to ride out the storm on a yacht in Cocoa Beach, Florida, and later died at a hospital.

In Volusia County, dozens of oceanfront buildings and homes were severely damaged as relentless high surf took advantage of a weakened beach defense from September's Hurricane Ian and washed away significant chunks of the beach.

Beach properties in Daytona, Florida collapse into the ocean due to beach erosion from Nicole. (Credit: Brandon Clement/ LSM)

Officials said 24 condos and hotels, including 10 buildings of at least 10 stories tall, are now unsafe and structurally dangerous, while another 25 homes have either already suffered significant damage or are threatened by the encroaching surf in the Wilbur-By-The-Sea neighborhood along Florida's east coast.

Several sections of the coastal A1A highway were washed out along the hurricane's path.

Vero Beach City Manager Monte Falls discusses the storm damage in the area from Nicole and plans of reconstruction.

Major coastal flooding was reported along the east coast of Florida, where a​ NOAA tide gauge at Port Canaveral, Florida, recorded up to 3.6 feet of inundation above normal high tide on Thursday morning.

Between 2 and 3 feet of inundation above normal high tide was also observed from northeastern Florida to the coasts of Georgia and South Carolina, including in Charleston, South Carolina.

Rising waters inundated roadways in Marineland,  which is located south of St. Augustine.

More than 300,000 Florida power customers lost electricity at the height of Nicole, but that number had dropped to around 37,000 by Friday morning.

Wind gusts from the hurricane topped 80 mph in some locations along the east coast of Florida. 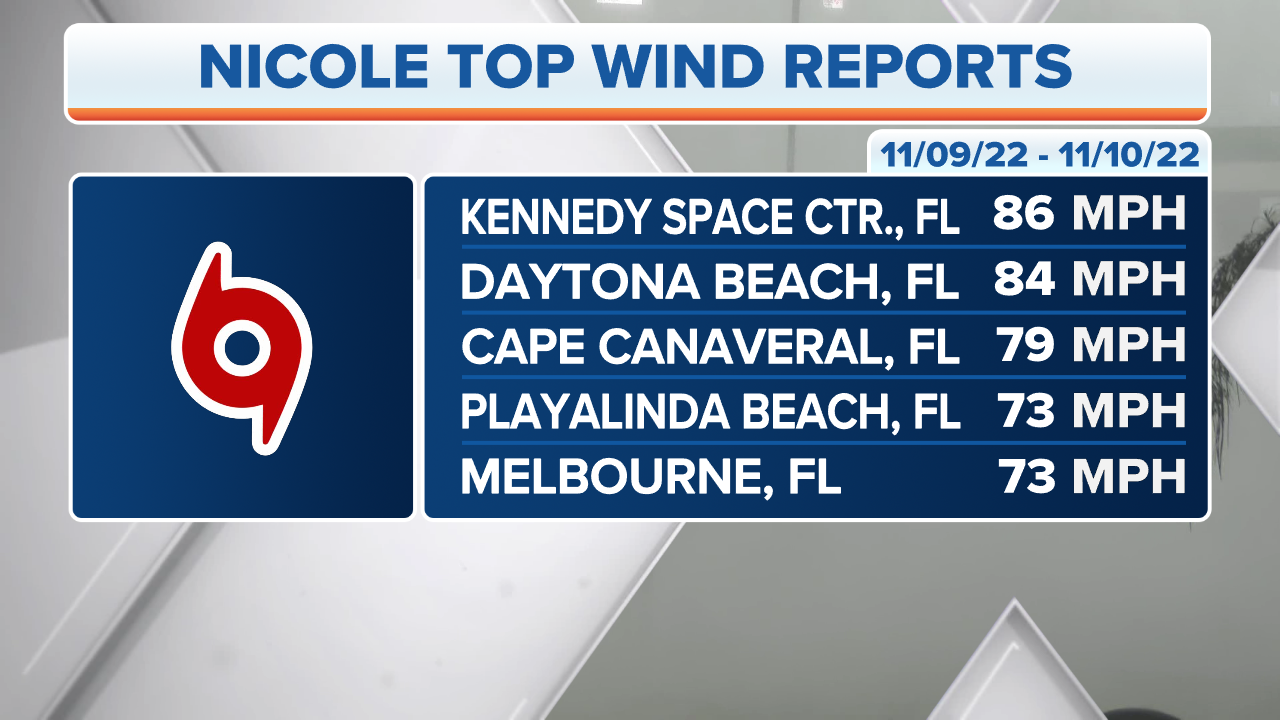 Nicole made two landfalls in the Bahamas Wednesday

Nicole made its first landfall just before noon Wednesday on Great Abaco Island in the northwestern Bahamas. It was the first November named storm to make landfall in the Bahamas in 15 years, according to the FOX Forecast Center.

Tropical Storm Nicole made landfall on Great Abaco Island in the northwestern Bahamas on Wednesday, Nov. 9, 2022.

On Wednesday evening, Nicole intensified into a Category 1 hurricane as it made a second landfall in the northwestern Bahamas around 6 p.m. over Grand Bahama Island, where a wind gust of 61 mph was recorded.

While Kennedy Space Center recorded a gust of 86 mph, wind gauges atop towers near NASA's $4 billion moon rocket clocked gusts over 90 mph, nearing 100 mph, which exceeded the threshold for leaving the rocket on the launch pad.

But a NASA spokesperson says it appears the Artemis rocket weathered the storm with just minor damage "such as loose caulk and tears in weather coverings." Teams are gearing up for the rocket's planned Nov. 16 launch.

Air travel on Earth remained a challenge in the Southeast too. Some airports in the path of Nicole, including Orlando, Melbourne, Palm Beach and Daytona Beach in Florida, closed on Wednesday. Miami, Tampa and Jacksonville remained open.

The storm shut down many of Central Florida's theme parks earlier than usual on Wednesday because of Nicole. Both Walt Disney World and Universal Studios closed Wednesday afternoon but were reopening later Thursday. SeaWorld and Busch Gardens remained closed until Friday.

Dozens of Tornado Warnings were issued throughout the mid-Atlantic on Friday as bands of Nicole moved through.

A storm chaser captured video of a possible tornado in central Virginia near Interstate 85.

Early indications are that very few of the storms produced actual tornadoes but National Weather Service offices will make the final determination on how many formed.