There are primary elections in 7 states on Tuesday in CA, IA, MS, MT, NJ, NM and SD.

The midterm elections are here, and voters in seven states across the country will cast their ballots on Tuesday for whom they'd like to see in local, congressional and state leadership positions.

As far as the weather is concerned, there will be a wide range of conditions from sunshine to hot temperatures and thunderstorms throughout the day. 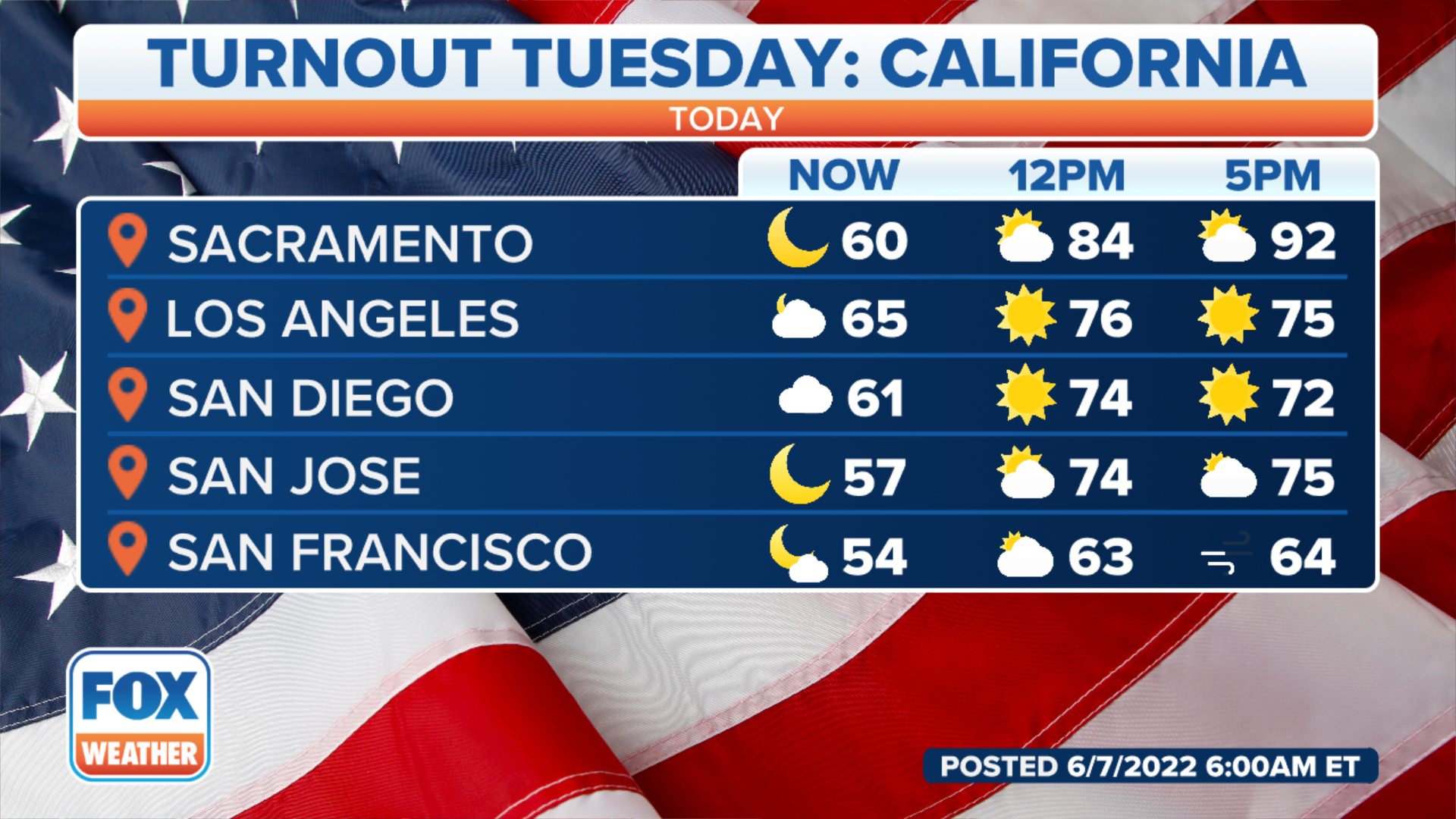 The primary forecast in California on June 7.
(FOX Weather)

The weather should cooperate across the Golden State on Tuesday, with temperatures in the 50s and 60s early in the morning from Sacramento through Los Angeles, San Diego, San Jose and San Francisco.

By the afternoon, temperatures will rise into the 70s and 80s with plenty of sunshine, except for the San Francisco area. Temperatures in the afternoon should be around 63 degrees with mostly cloudy conditions.

Temperatures should continue to rise in the afternoon, with Sacramento reaching 92 degrees. It will be in the 70s in Los Angeles, San Diego and San Jose, and San Francisco will be windy, with temperatures only around 64 degrees. 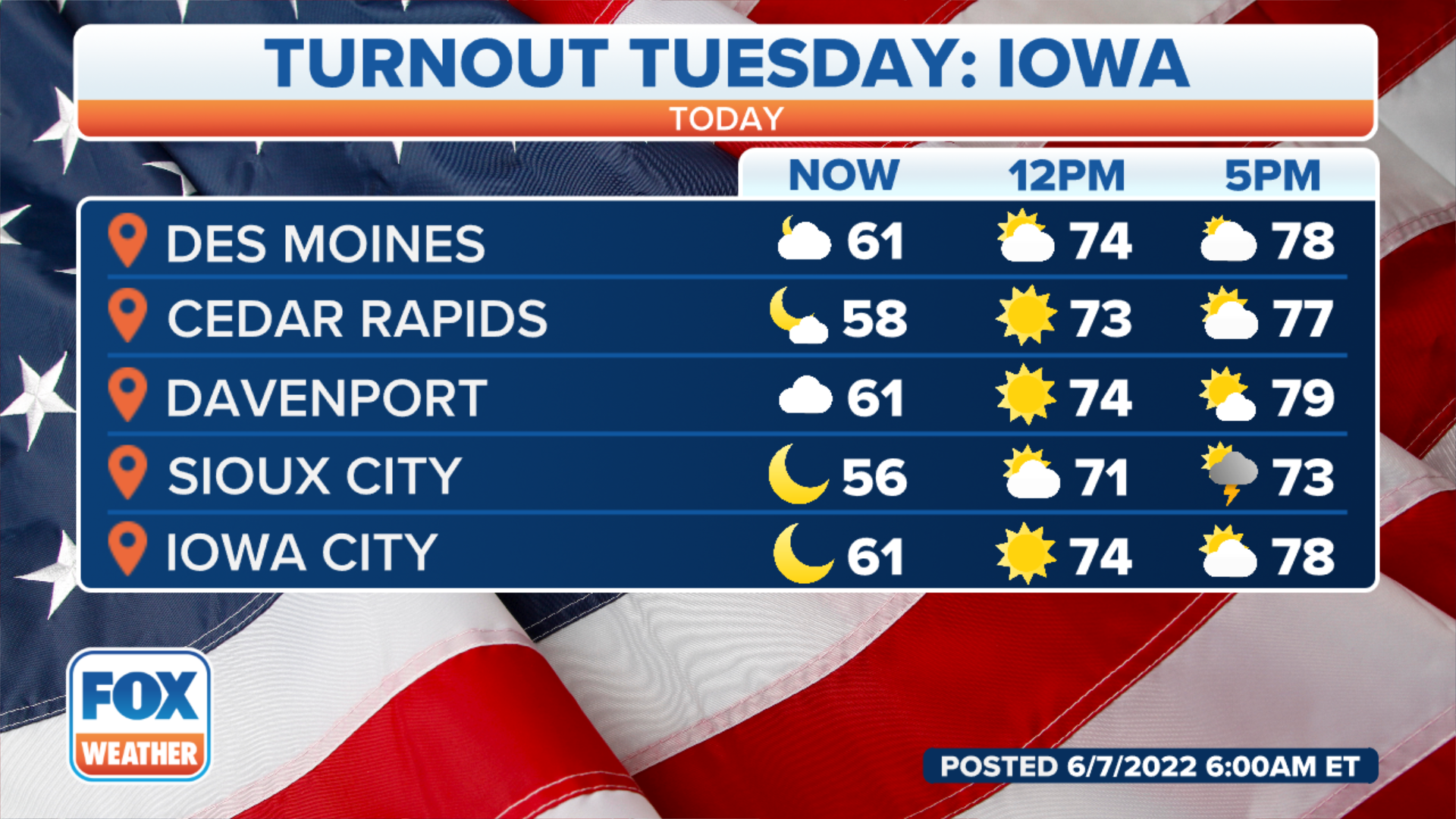 The primary forecast in Iowa on June 7.
(FOX Weather)

The day will start off on the cool side in Iowa, but voters can expect a warmup throughout the day with a chance for thunderstorms.

Voters headed to the polls in Sioux City should keep an eye on the sky as thunderstorms, some of which could be severe, are possible in the region.

Davenport is expected to be the warm spot, with a high temperature later in the afternoon of 79 degrees with mostly sunny conditions. 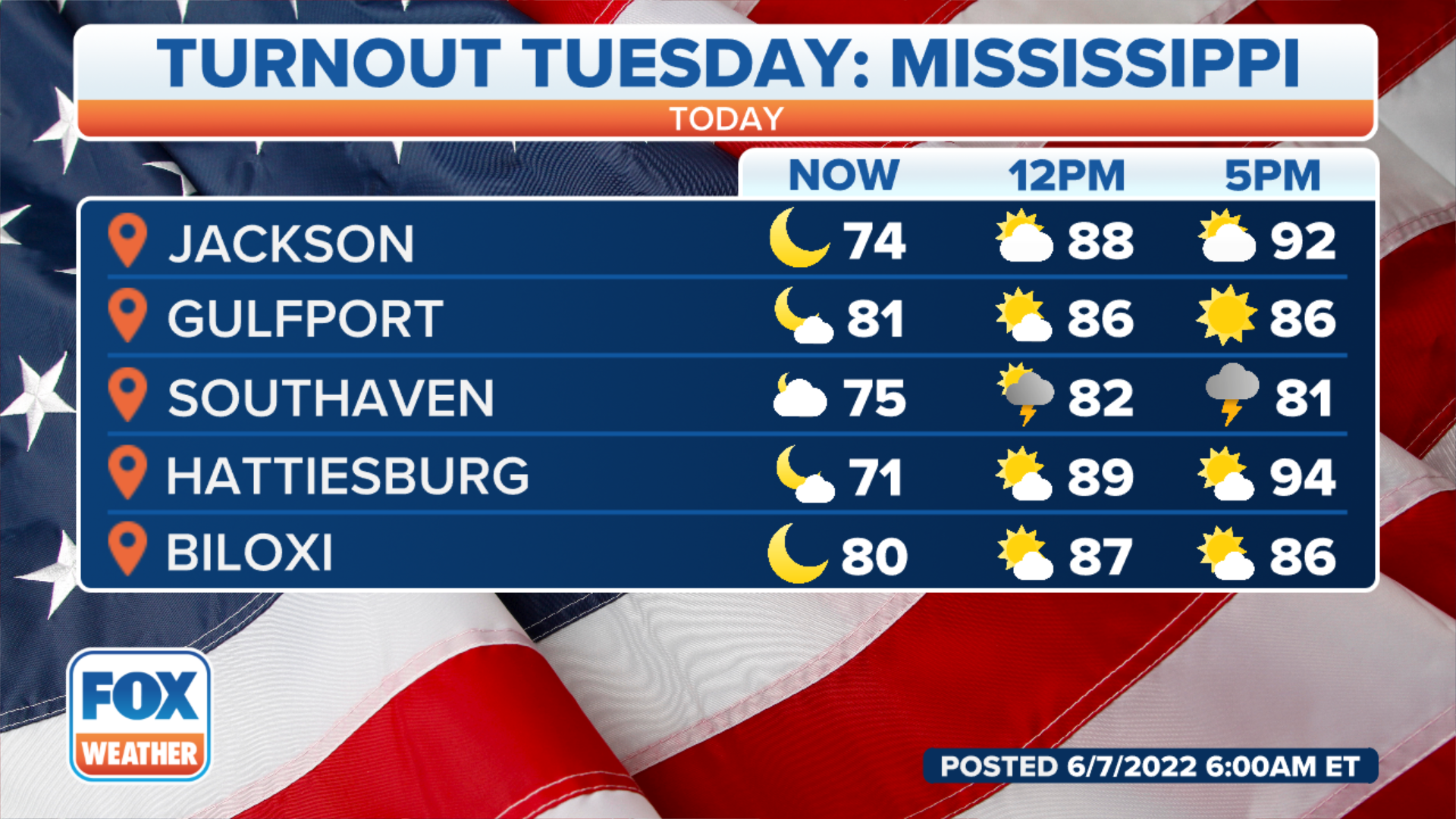 The primary forecast in Mississippi on June 7.
(FOX Weather)

It's expected to be warm in Mississippi for folks heading out to the polls early in the morning, and temperatures will rise throughout the afternoon.

Jackson will see clear conditions in the morning with a temperature of around 74 degrees. By lunchtime, temperatures will continue to rise to about 88 degrees with some clouds. The high temperature is expected to hit 92 degrees.

'IT'S AN HONOR TO HELP THOSE IN NEED': COAST GUARD TRAINS FOR BUSY HURRICANE SEASON ALONG THE GULF COAST

In Southaven, morning temperatures will be around 75 degrees but will rise into the 80s during the afternoon. There's also a chance for thunderstorms in the region.

Gulfport will be in the 80s all day with plenty of sunshine for anyone heading out to the polls during the day. 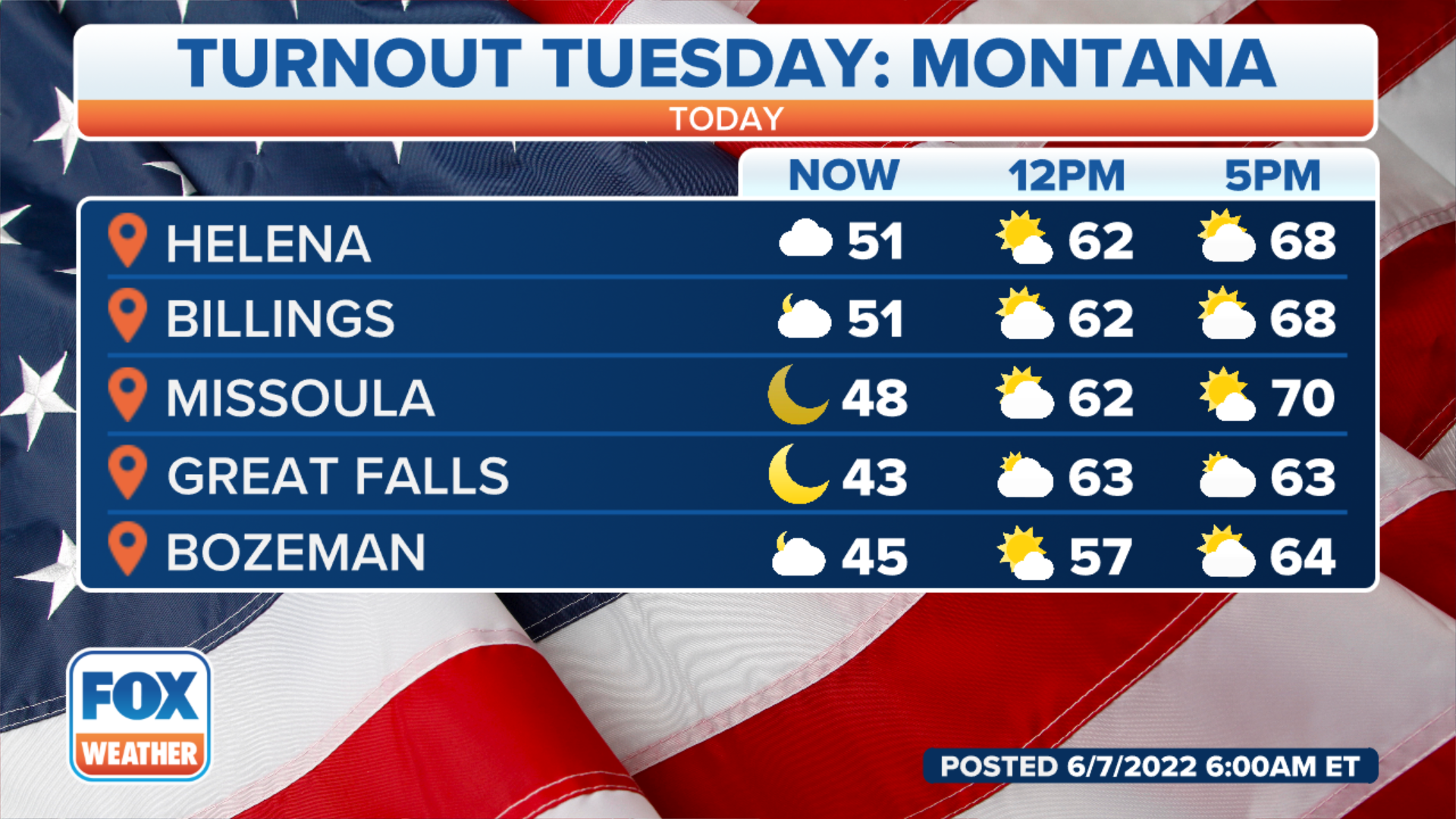 The primary forecast in Montana on June 7.
(FOX Weather)

Temperatures will be much cooler Tuesday morning in Montana, with temperatures ranging from 51 degrees in Helena and Billings to the 40s in Missoula and Great Falls.

However, temperatures will rise during the day, so the cooler air will move out of the region.

By lunchtime, Helena, Billings, Missoula and Great Falls will all be in the lower 60s, with Bozeman staying around 57 degrees with some clouds.

Temperatures should be in the 60s across the state as we get into Tuesday afternoon, except for Missoula, which should get to 70 degrees. 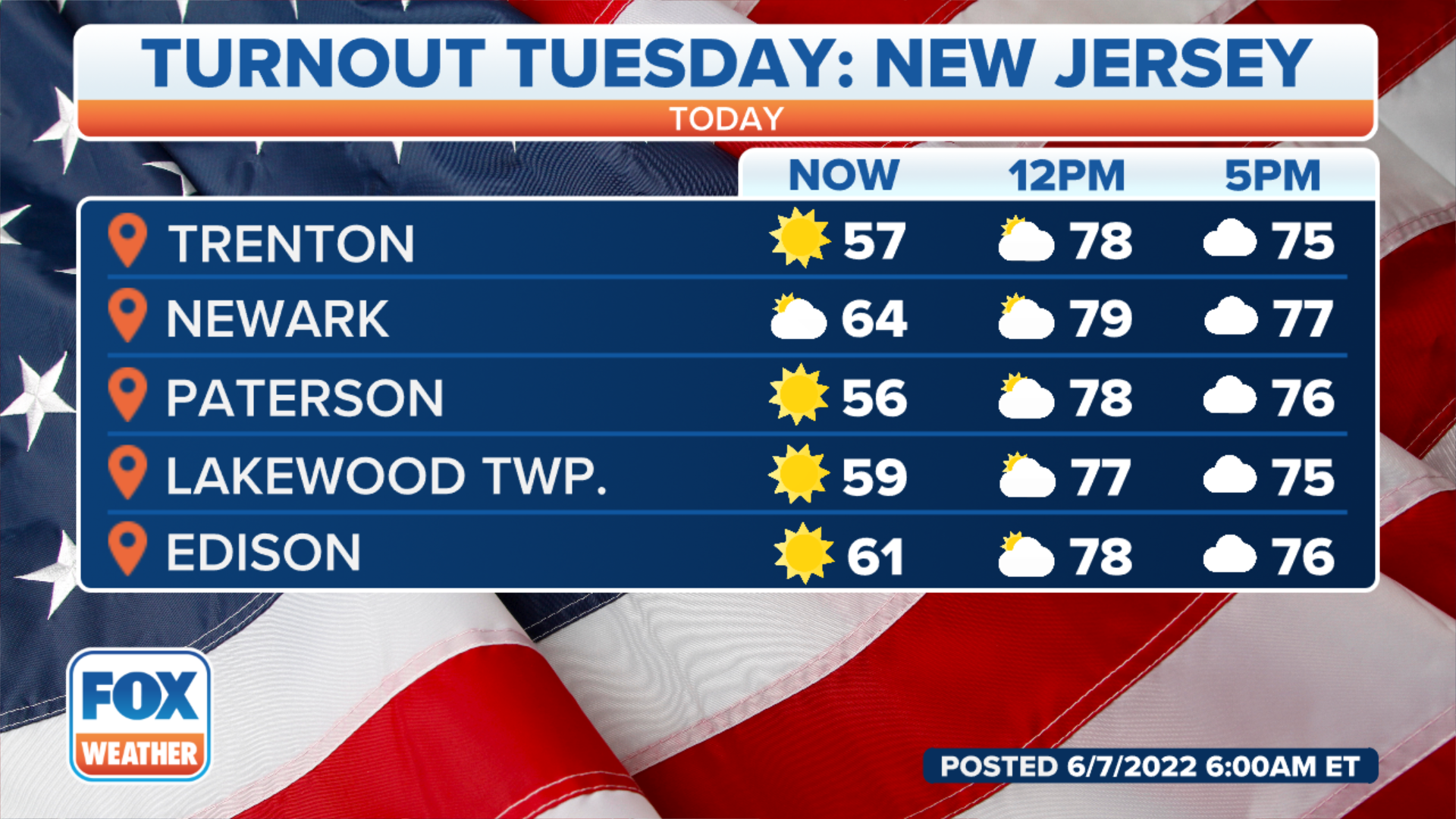 The primary forecast in New Jersey on June 7.
(FOX Weather)

There will be plenty of sunshine in the Garden State on Tuesday morning, but clouds will be filling in as we get into the afternoon and evening.

Temperatures should be in the upper 70s in Trenton, Newark, Paterson, Lakewood Township and Edison, with cloudy to mostly cloudy conditions.

By 5 p.m., however, clouds will be more widespread, with temperatures only making it to the mid-70s in most areas. 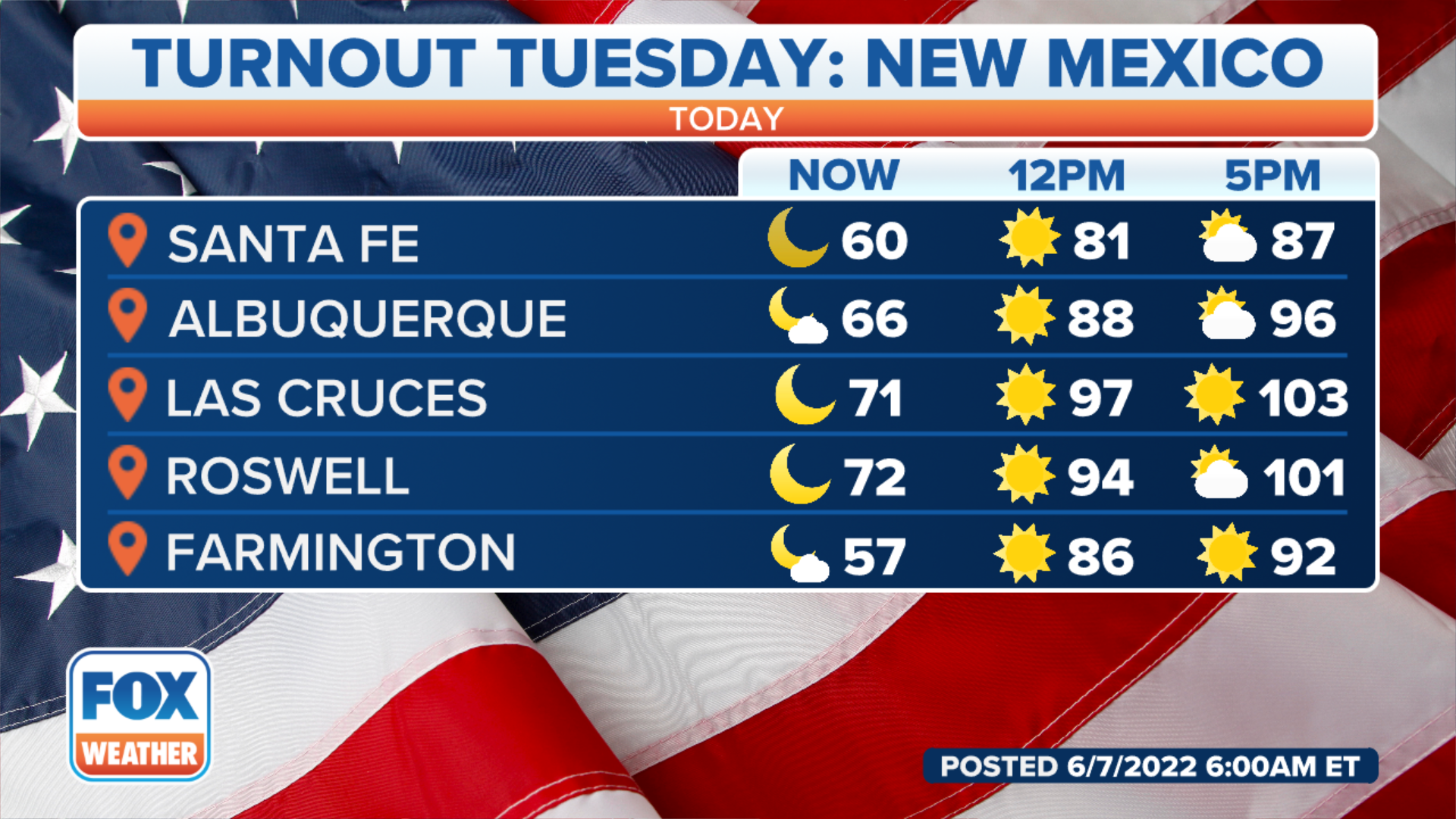 The primary forecast in New Mexico on June 7.
(FOX Weather)

It has been excessively hot across the South and Southwest, including New Mexico.

The state has been experiencing extremely dry conditions, and there are several fires currently burning. One of which, the Calf Canyon and Hermits Peak fire, is the largest in state history.

Expect clear to mostly clear conditions across the state on Tuesday, with temperatures in the 60s and 70s in the morning and 80s and 90s by lunchtime.

But then the heat will really get cranking in places like Las Cruces and Roswell, where temperatures are expected to reach above 100 degrees. 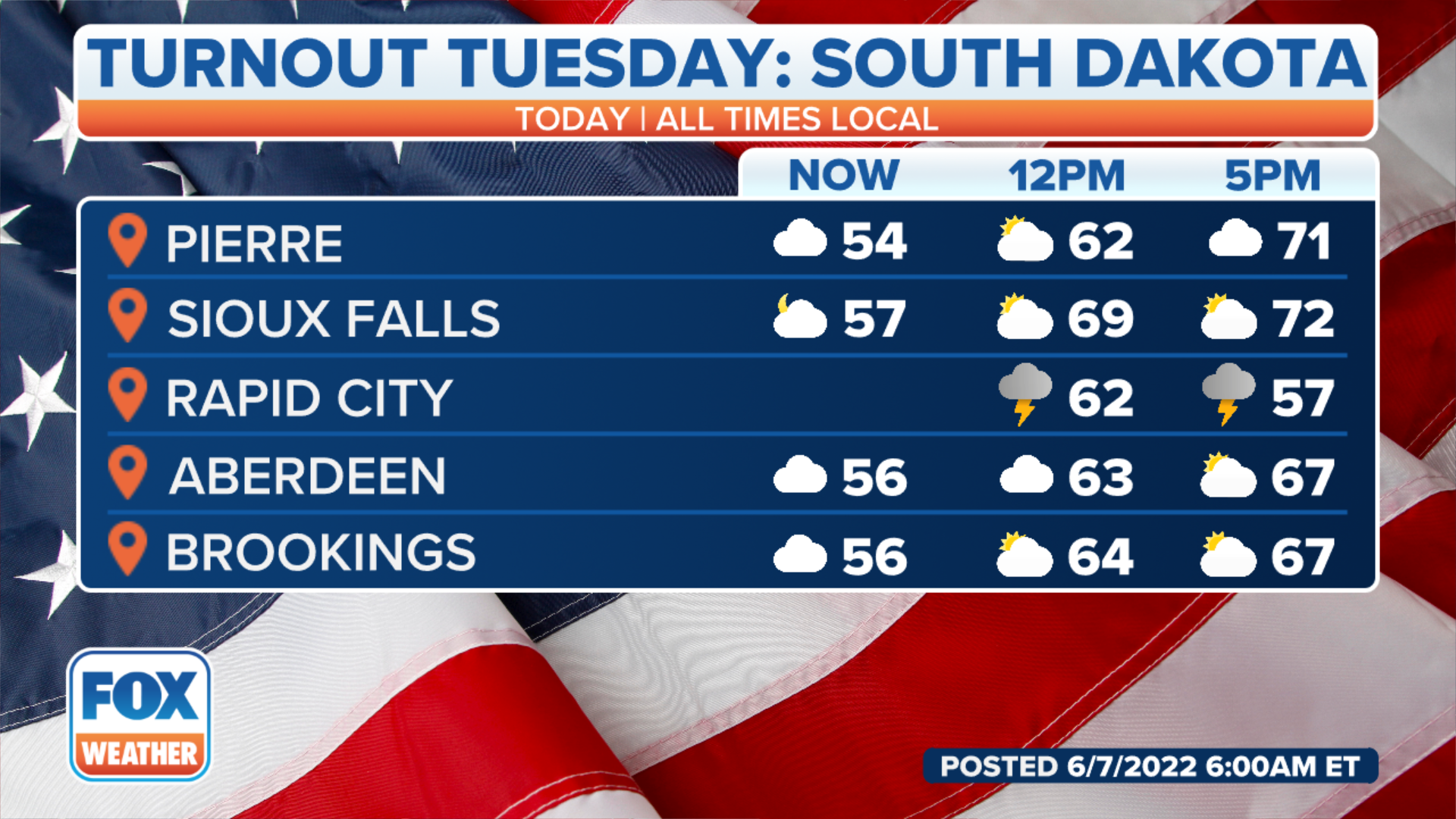 The primary forecast in South Dakota on June 7.
(FOX Weather)

And in South Dakota, voters can expect mostly cloudy conditions from Pierre to Sioux Falls, Rapid City, Aberdeen and Brookings.

Temperatures are expected to be in the 50s on Tuesday morning and will rise a bit into the 60s. Sioux Falls will be about 70 degrees by lunchtime with mostly cloudy conditions.

As we get into Tuesday afternoon and evening, there is the chance for some thunderstorms in Rapid City, where a temperature of 57 degrees can be expected.

Pierre and Sioux Falls will be in the lower 70s by 5 p.m. with cloudy to mostly cloudy skies.