Development odds increasing for tropical disturbance spinning in the Atlantic

The National Hurricane Center continues to increase the odds that a tropical disturbance spinning in the Atlantic Ocean will develop into a tropical system.

The Atlantic Basin could wake up from its recent slumber this week as a tropical disturbance continues to head west across the tropical Atlantic Ocean over the next few days.

Dubbed Invest 94L by the National Hurricane Center, the tropical disturbance is currently located over the central tropical Atlantic and is producing a large area of disorganized showers and thunderstorms.

It's been nearly three weeks since Tropical Storm Alex formed well off the east coast of Florida on June 5, but forecasters are now monitoring the region east of the Lesser Antilles for possible tropical development. 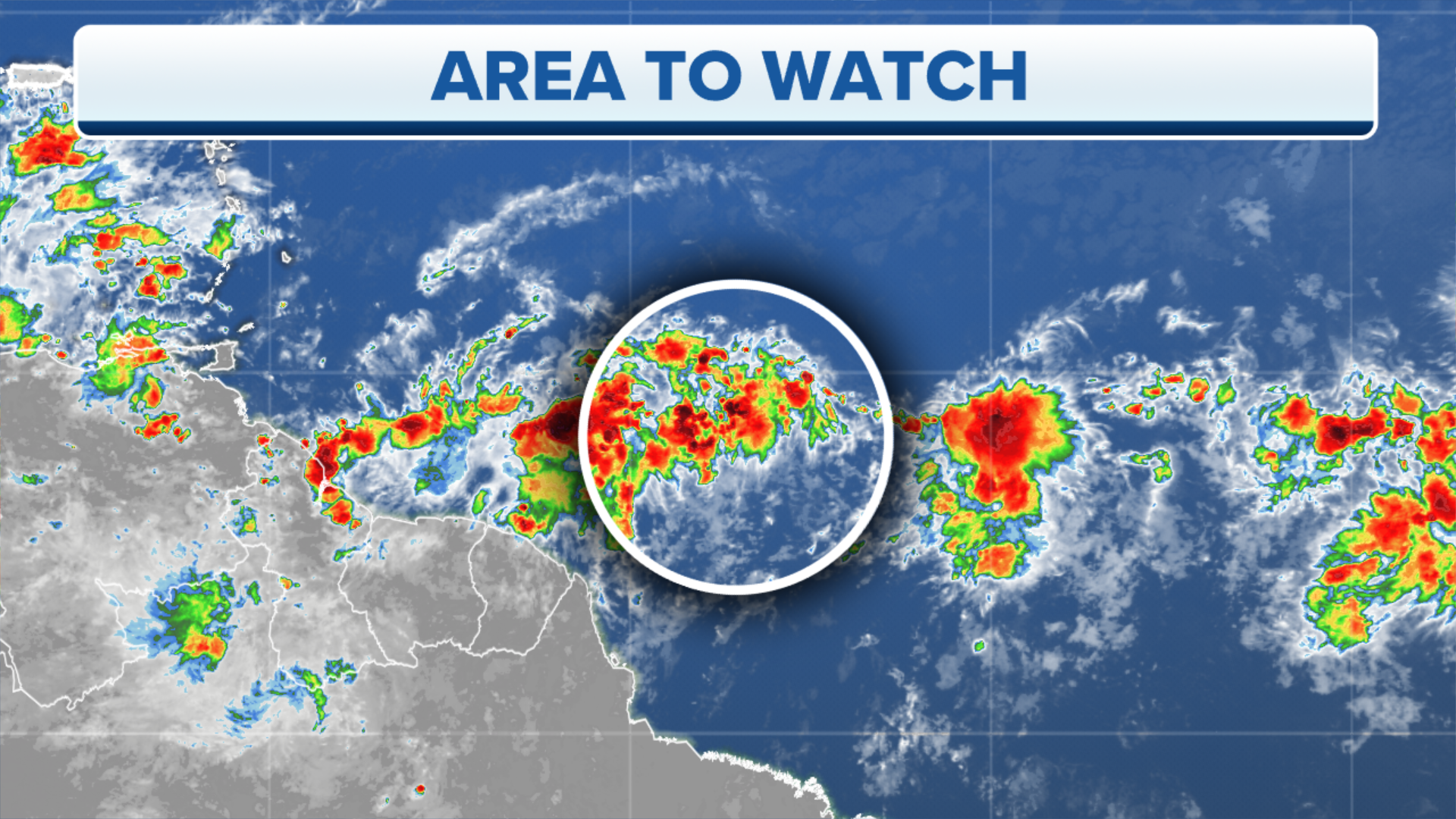 The tropical disturbance is circled over the eastern tropical Atlantic.
(FOX Weather)

What are the chances of development?

According to the NHC, Invest 94L currently has a 60% chance over next 48 hours and an 80% chance to develop within the next five days.

"Shower and thunderstorm activity associated with a tropical wave over the central tropical Atlantic continues to become better organized," the NHC said in a tropical weather outlook Sunday morning. "Environmental conditions appear conducive for further development, and a tropical depression is likely to form during the early to the middle part of this week."

What makes it unusual?

It’s quite unusual to have an Africa-originated disturbance develop into a tropical depression or tropical storm in the Atlantic east of the Lesser Antilles in June. There are only four in the record book. Usually, hostile upper-level winds and dry air keep systems from organizing in the tropical Atlantic until later in the summer. 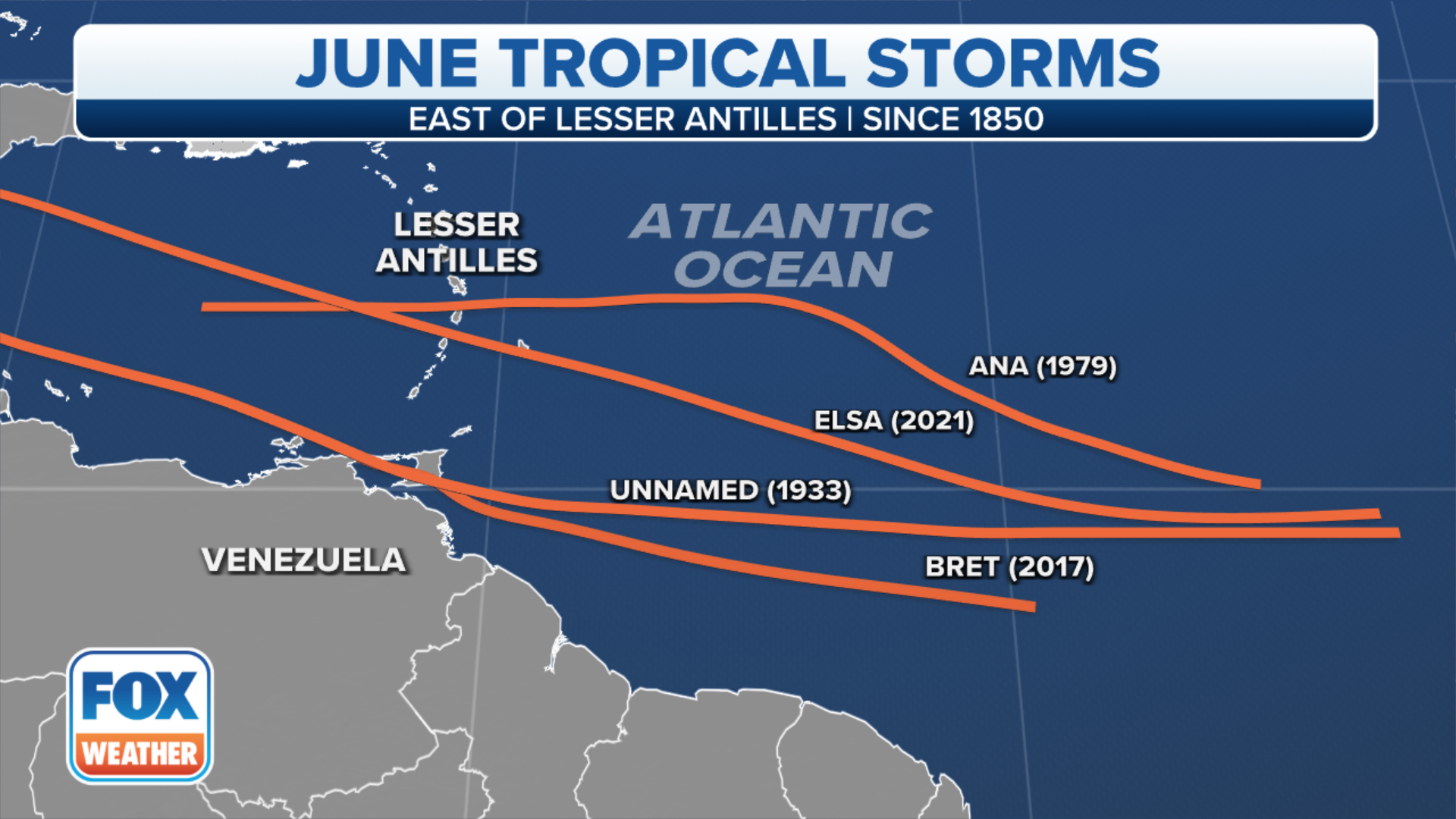 Tropical storm development east of the Lesser Antilles in June since 1850.
(FOX Weather)

However, the most recent system to pull it off was Elsa, just last year. It was named a tropical depression in the 11 p.m. Eastern advisory on June 30, so it just snuck under the July wire. 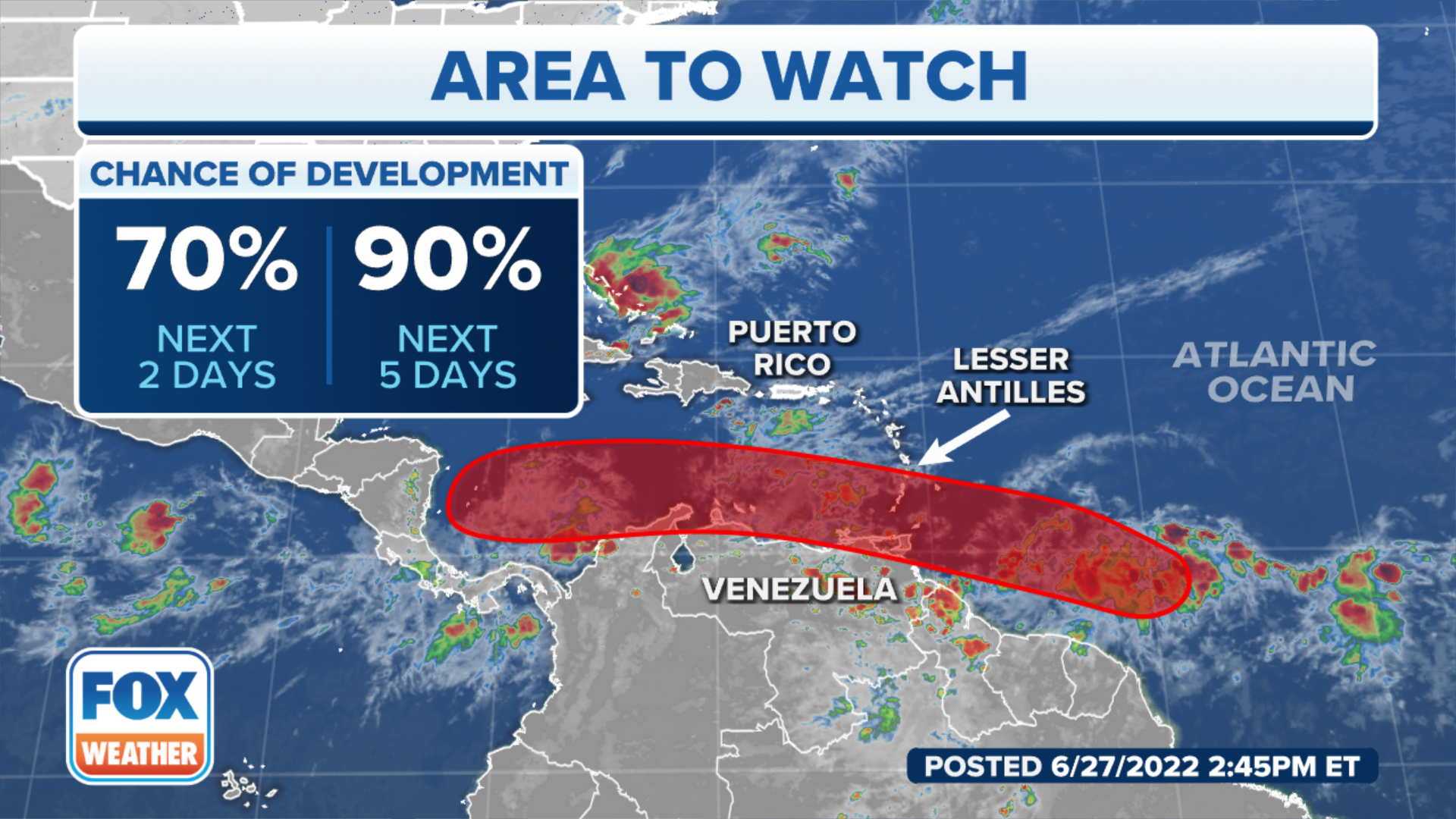 The area being monitored for possible development in the tropical Atlantic.
(FOX Weather)

Like this disturbance, Elsa formed unusually far south, so it avoided the hostile conditions just to its north. Elsa became a hurricane just as it passed over the southeastern Caribbean islands of St. Lucia and St. Vincent in early July. Eventually, a weakened version brushed the lower Florida Keys and the west coast of Florida before coming ashore southeast of Tallahassee.

This year’s disturbance came off Africa far enough south that it was able to tap into the band of tropical moisture that always resides just north of the equator. The extra moisture has allowed it to hold off the very dry air just to its north. The consensus of the computer forecast models is that the disturbance is wrapped in enough moisture that it will be able to overcome its low-latitude start in life and survive its trip to the Caribbean. 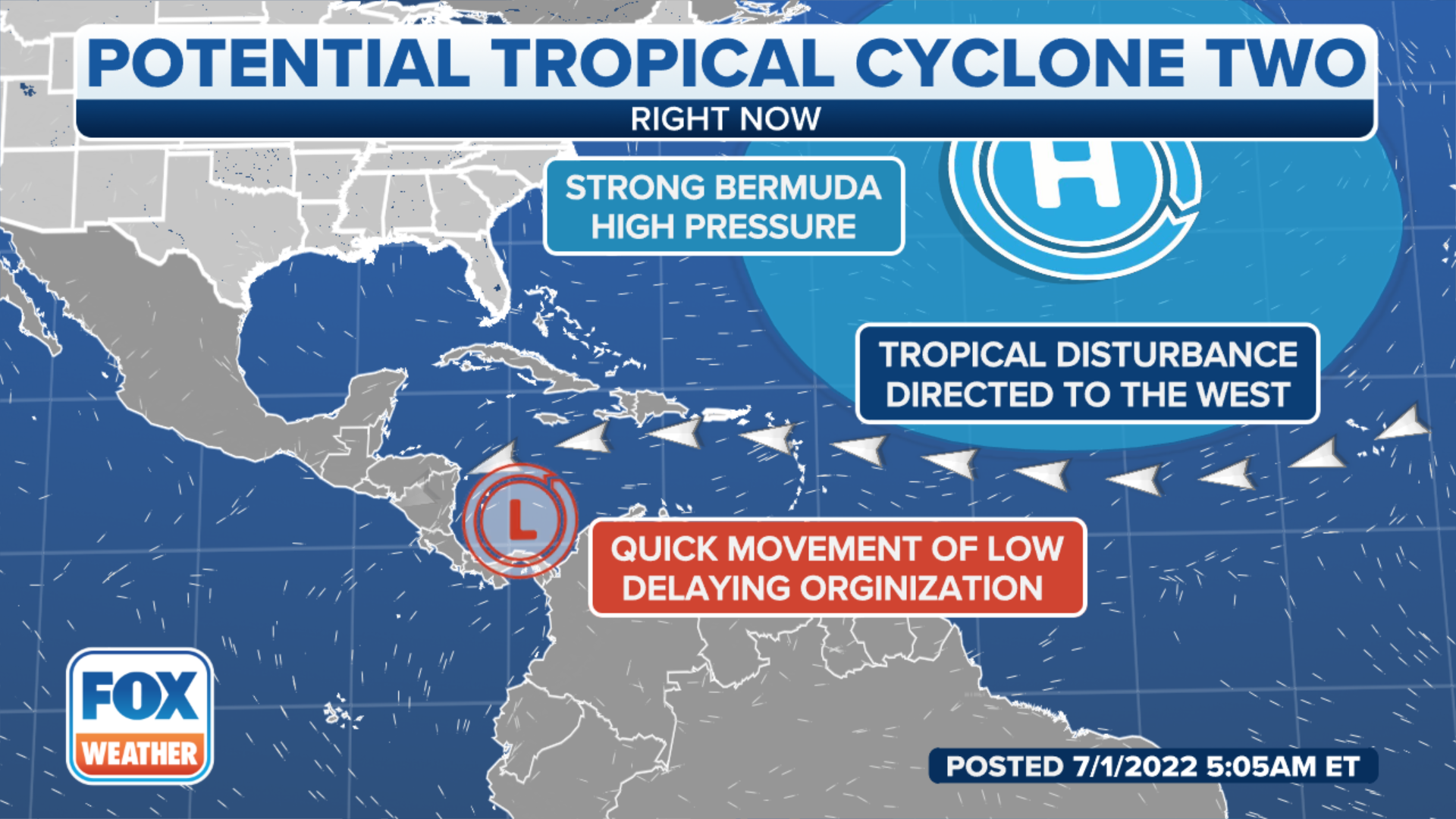 The consensus of the long-range computer models is that another high-pressure system over the U.S. will ensure that it is not able to turn north and will continue across the southern Caribbean.  Long-range projections of the just-developing system are always iffy, however.

The disturbance’s track is unusually far south, meaning it might affect Trinidad and Tobago followed by Curaçao, Bonaire, and Aruba in the far southern Caribbean Sea. A hurricane passed just north of the ABC Islands in the very busy hurricane year of 1933, but that’s the only June storm to come within 100 miles of there in the record book.

That 1933 storm passed directly over Trinidad, and in 2017, Tropical Storm Bret crossed the island as well. Those are the only two known organized systems to have directly affected the southernmost Caribbean Islands in June.

In fact, this storm might track so far south that its proximity to the South American coast becomes a deterrent to significant development, though that’s several days down the road.

WHERE TROPICAL STORMS, HURRICANES TYPICALLY OCCUR DURING EACH MONTH OF ATLANTIC HURRICANE SEASON

The consensus of the computer forecast models is that the disturbance is wrapped in enough moisture that it can hold off the very dry air just to the north. Otherwise, the atmospheric conditions appear conducive for it to develop into a tropical depression or tropical storm before it gets to the islands. The system is moving pretty fast, which can inhibit development, so it’s also possible that it moves through the islands as just a gusty moisture surge and develops in the southern Caribbean Sea.

The long-range computer models generally keep the system in the southern Caribbean, well away from the U.S., blocked by the persistent heat-dome high-pressure system over the central and southeastern parts of the country. But there are scenarios that would track it at least a bit farther north. On the current schedule, the system will reach the islands on Tuesday.

The general rule of thumb that forecasts for disorganized or just-developing systems are always subject to larger-than-average errors applies in this case. So it’s not good to project too far ahead. 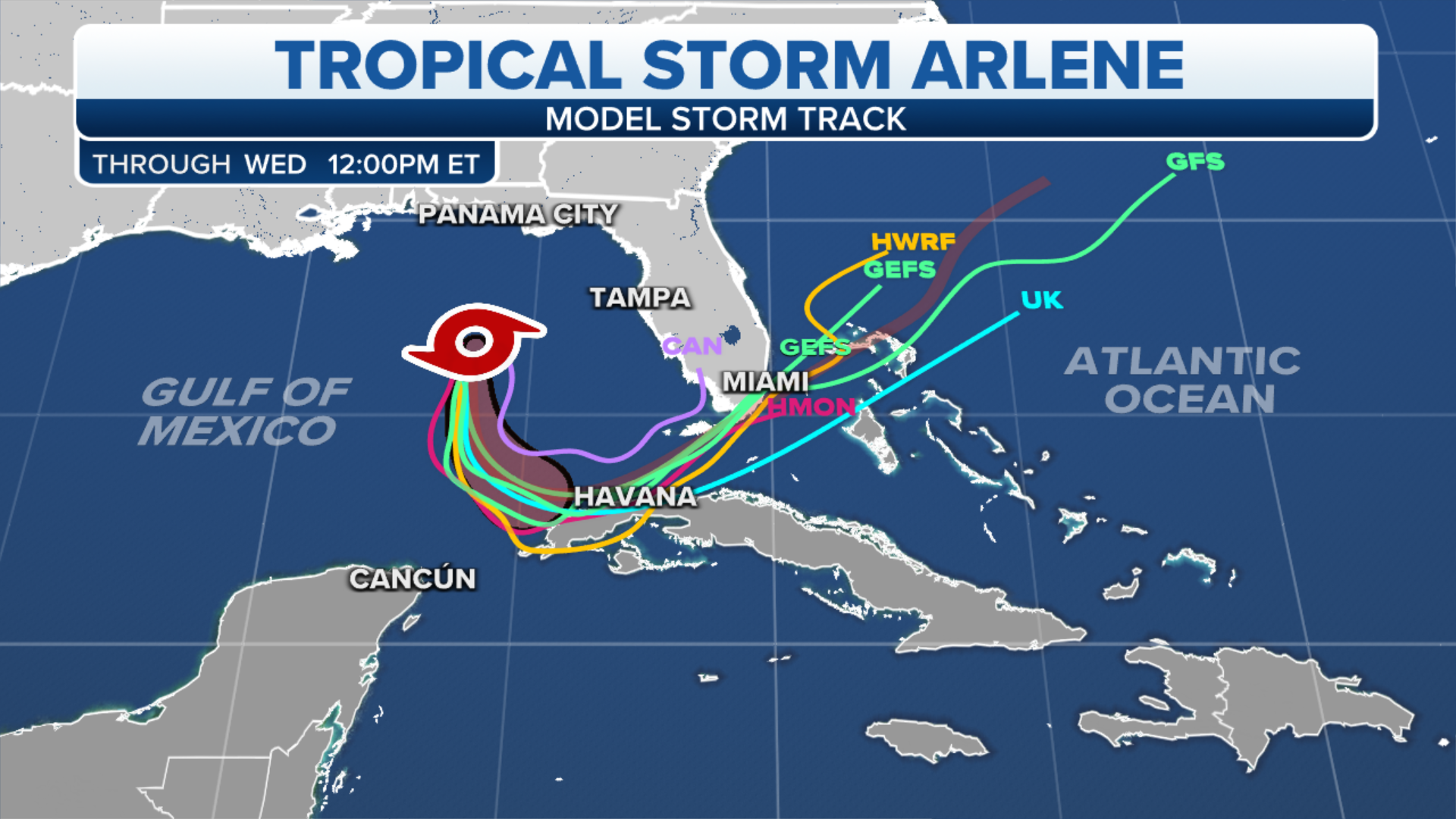 Other early-season disturbances are set to follow this one off Africa and emerge over the tropical Atlantic. At this point, the computer forecast models show the typical June inhibiting factors in the atmosphere keeping them from organizing. But we’ll see.

It might be that this disturbance is a one-off that was able to tap into just enough moisture to hold off the dry air and make it across the Atlantic.

Other than this disturbance, nothing appears likely to develop in the tropics through the middle of next week, at least.