The NHC says that the storm lost all tropical characteristics and have given it the designation of Post-Tropical Cyclone Alex Monday evening.

Post-Tropical Cyclone Alex is now weakening after it pounded Bermuda with heavy rain and high winds on Monday, but the storm will continue to move away from the archipelago and out into the open waters of the central Atlantic.

The National Hurricane Center issued its final advisory for Alex on Monday evening, saying the storm lost tropical characteristics and giving it the designation as a "post-tropical cyclone."

Winds up to 70 mph from Tropical Storm Alex hit Bermuda

Wind gusts up to 70 miles per hour from Tropical Storm Alex hit Bermuda on June 6. 2022. (Video: Rob Kerr via Storyful)

Tropical Storm Warnings were previously in effect for Bermuda but have now been discontinued as any lingering rain and wind impacts are expected to subside through the rest of the day.

More than 950 customers remained without power in Bermuda as of Monday afternoon.

Michael Weeks, Bermuda's national security minister, announced that all public schools in Bermuda would be closed Monday and public transportation would be suspended through the morning. He also said government services would start at 1 p.m. local time following the passage of Tropical Storm Alex.

At least three American Airlines flights from Bermuda to the U.S. had been canceled as of Monday morning.

Alex is forecast to weaken through the rest of the day and will transition to a non-tropical low-pressure system later Monday. The storm peaked in intensity late Sunday night when its maximum sustained winds reached 70 mph, just 4 mph shy of a Category 1 hurricane.

Despite the storm heading away from the U.S. East Coast, rip currents will remain elevated along beaches in the Southeast through the week ahead. 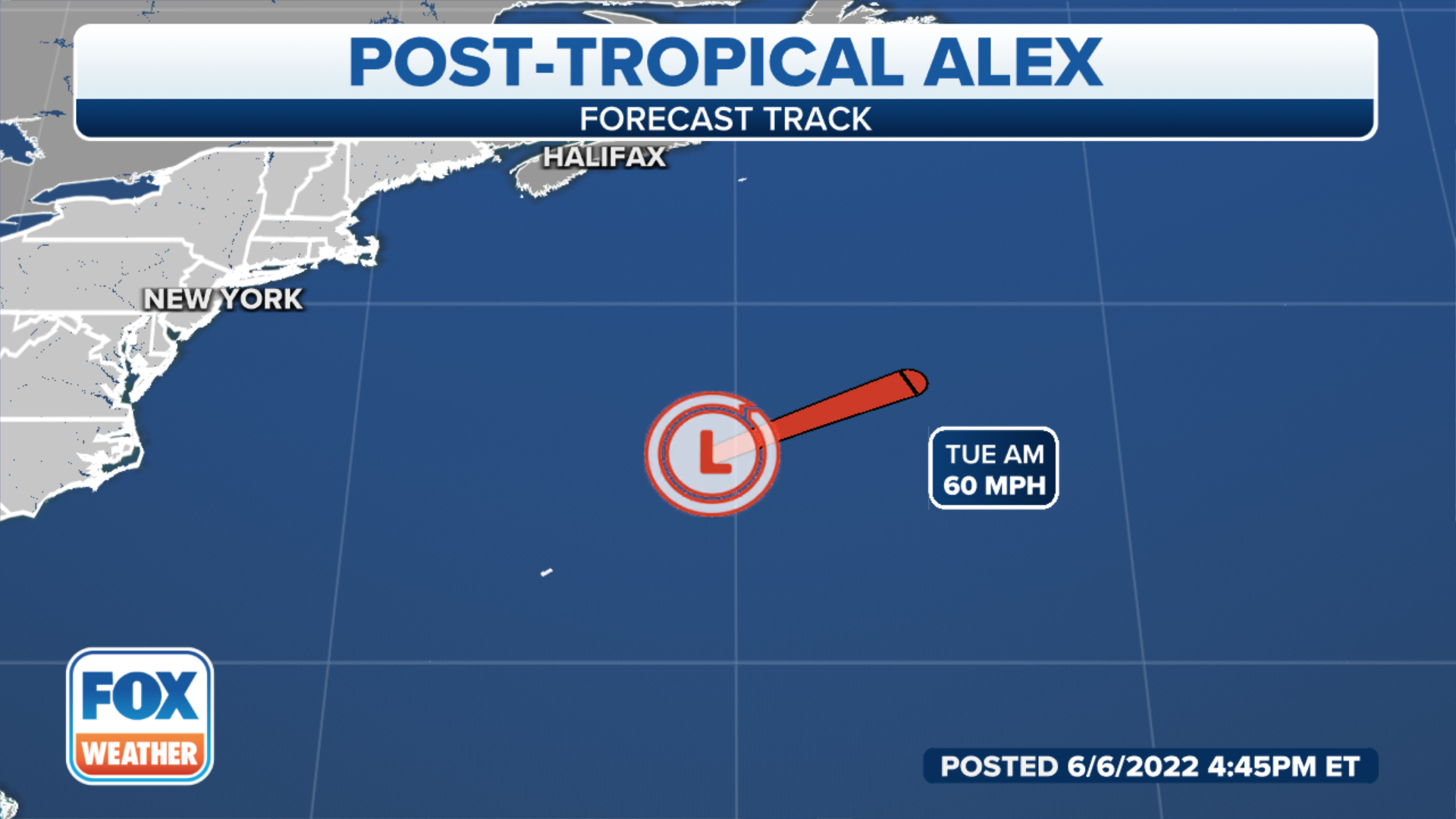 Alex became the first named storm of the 2022 Atlantic hurricane season early Sunday morning well off the east coast of Florida. Before it developed into a tropical storm, this system produced flooding rain across South Florida on Friday and Saturday when it was still a disorganized tropical disturbance.

"The configuration of the upper-level winds changed just enough to let it form," FOX Weather Hurricane Specialist Bryan Norcross said. "Previously, they were ripping across the disturbance. That kept it from organizing, pushing the thunderstorms and tropical moisture well ahead of the surface circulation that kept trying to form. The upper winds also injected dry air into the system, which further gummed up the works."

After Alex, it appears the tropics will remain calm for the rest of the week, at least, according to Norcross.

The average date of the first named storm is June 20, so the 2022 Atlantic hurricane season is running slightly ahead of the average pace.

As the system passed over Florida, heavy rain caused flash flooding in Miami and coastal communities during the early morning hours of Saturday.

The City of Miami Fire Rescue responded to multiple calls of people stranded inside their vehicles after becoming stuck in floodwaters.

"A band of torrential rain caused widespread flooding up to waist-deep in the Miami area overnight, with other areas nearby also affected," Norcross said on Saturday morning. "The National Weather Service radar in Miami shows that a north-south swath of intense thunderstorms dumped 6 to over 12 inches of rain from Hallandale Beach, which is just south of Fort Lauderdale, down Interstate 95 through Miami to the upper Florida Keys. Three to 5 inches came all at once."

Miami received nearly a foot of rainfall, and many other locations across South Florida reported nearly a month's worth of precipitation between Friday and Saturday.

The top rain totals in Florida as of Sunday morning.

In addition to rain, the tropical disturbance created blustery conditions south of the Interstate 4 corridor.

On Saturday afternoon, Fort Pierce, Florida, reported a wind gust of 40 mph, and a weather station near Melbourne Beach, Florida, clocked a gust of 48 mph.

The winds were responsible for occasional power outages, but by Saturday evening, most customers' electricity had been restored.

Florida was not the only area that experienced life-threatening impacts from the disturbance.

In Cuba, authorities reported that the heavy rainfall caused landslides, and there were at least two deaths attributed to the system near the capital city of Havana.

FOX Weather will be extensively covering hurricane season, and the FOX Weather app is a great resource to keep you informed and has a 3D radar that you can use to track storms. The free FOX Weather livestream is also available 24/7 on the website, app and on your favorite streaming platform. The FOX Weather Update podcast also provides weather information for the entire country.