Duluth, Minnesota received the first measurable snow of the season.

A series of cold fronts in the Upper Midwest have ushered in below-average temperatures and widely scattered snow showers, allowing some cities to see their first measurable snowfall of the season.

The FOX Forecast Center said the chilly air is pouring out of Canada and settling across the northern tier of the U.S., where snow chances stretch from North Dakota and Minnesota to the east into northern Wisconsin and Michigan’s Upper Peninsula.

Most snow accumulations should remain below 3 inches from International Falls, Minnesota, to Marquette, Michigan, and will be widely scattered in coverage.

Thursday featured mainly snow flurries, then a more concentrated area of light snow will move through on Friday.

Most additional snowfall accumulations will occur on grassy surfaces during the day. As of 6 a.m. local time, Duluth had recorded 1.8 inches of snow – just enough to make a snowman in front of the NWS office.

A lake-effect snowband from Lake Superior will also be rotating onto Minnesota's North Shore later in the day but will cause very little impact, the NWS noted.

WHAT IS LAKE-EFFECT SNOW?

Some flakes have even been recorded as far south as the Minneapolis/St. Paul metro area, where the NWS office in the Twin Cities measured 0.1 inches of snow as of 6 a.m. local time, marking the first measurable snowfall of the season there – about three weeks ahead of the average first snow (Nov. 6), though there has been measurable snow as early as Sept. 24 in 1985.

Measurable snow is defined as an accumulation of at least 0.1 inches.

International Falls and Bemidji in Minnesota could also see their first snow of the season on Friday.

"That snowfall is going to start to increase in intensity for those of you in places like Duluth, but by the afternoon time, it becomes scattered," FOX Weather meteorologist Jason Frazer said. "Some of you may end up seeing a little bit of rain mixing in with this towards the latter half of the evening." 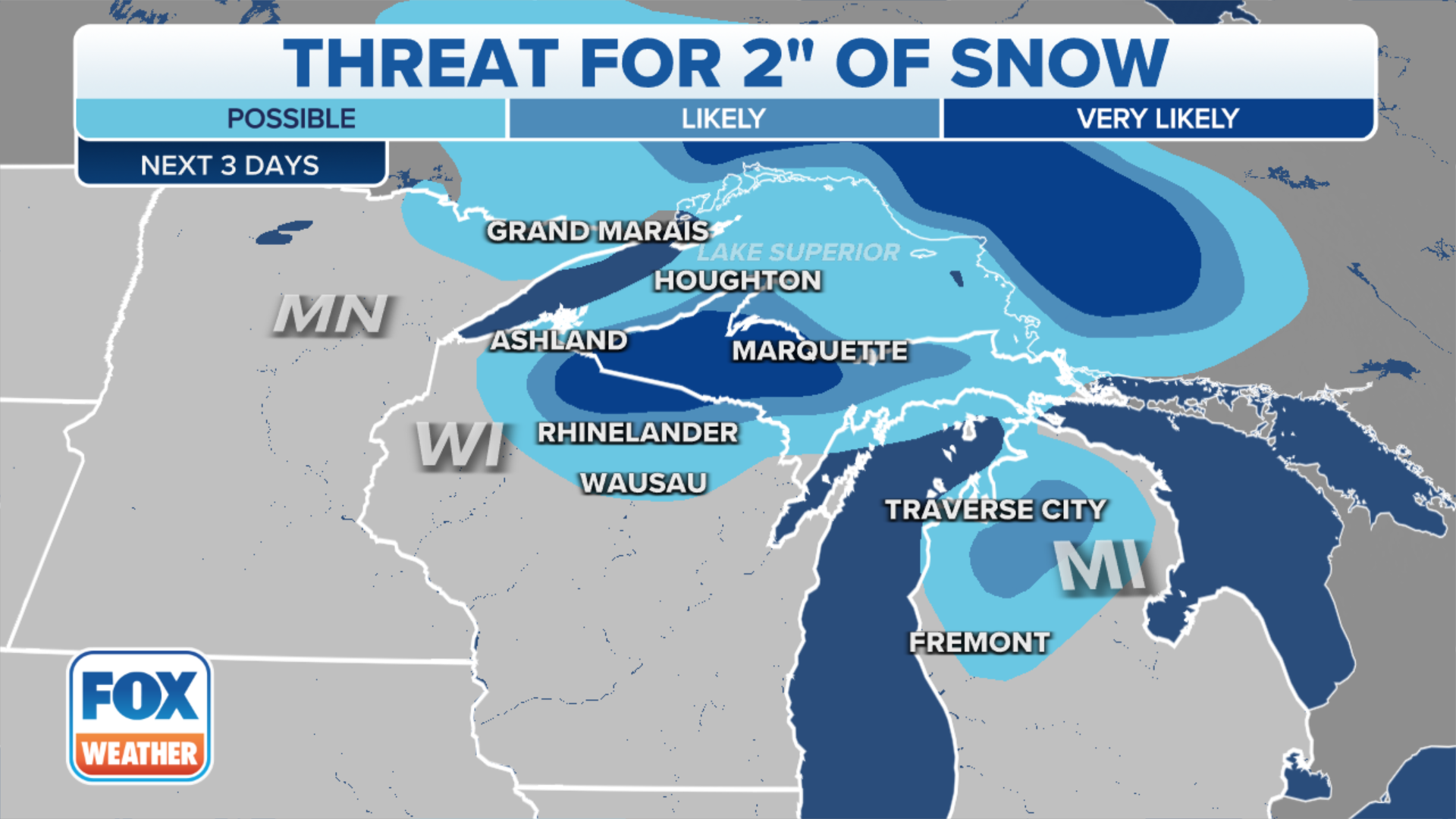 The potential snow is expected to remain north of Interstate 94 and will rank on the lowest possible scale of the Winter Storm Severity Index (WSSI). That index considers various data sources to depict how significant the impacts could be.

WHAT ARE THE ODDS OF A WHITE HALLOWEEN?

The FOX Forecast Center is warning travelers to drive carefully in snow, but the event should not have a significant impact on daily life.

Due to the rollercoaster temperature swings typical of fall, the NWS said the snow does not typically stick to the pavement until late November, at the earliest. Any snowfall that does accumulate on the grass during this event, however, is expected to melt quickly.

Computer forecast models show temperatures will rise above average by the middle of next week.

Widespread freezing temperatures are expected across the Upper Midwest each night into the weekend.