As Texas moves into another day of triple digit heat, the state is concerned if the drought will continue to impact agriculture and tourism.

It's been excessively hot across much of the United States, and the above-average temperatures will continue through the rest of the week, with more than 104 million Americans under heat alerts.

Temperatures across the country will be in the 90s and 100s again on Thursday, with many areas seeing heat index values higher than 100 degrees.

More than 104 million Americans are under a heat alert on Thursday, July 21.

Because of the relentless heat, the National Weather Service has issued heat alerts from coast to coast.

Excessive Heat Warnings are in effect across the Southwest, as well as portions of west-central Alabama.

Heat Advisories are more widespread, covering areas from Texas and the southern Plains through the lower Mississippi Valley.

In the East, Heat Advisories extend across an area from the Carolinas north through the mid-Atlantic, Northeast and New England. 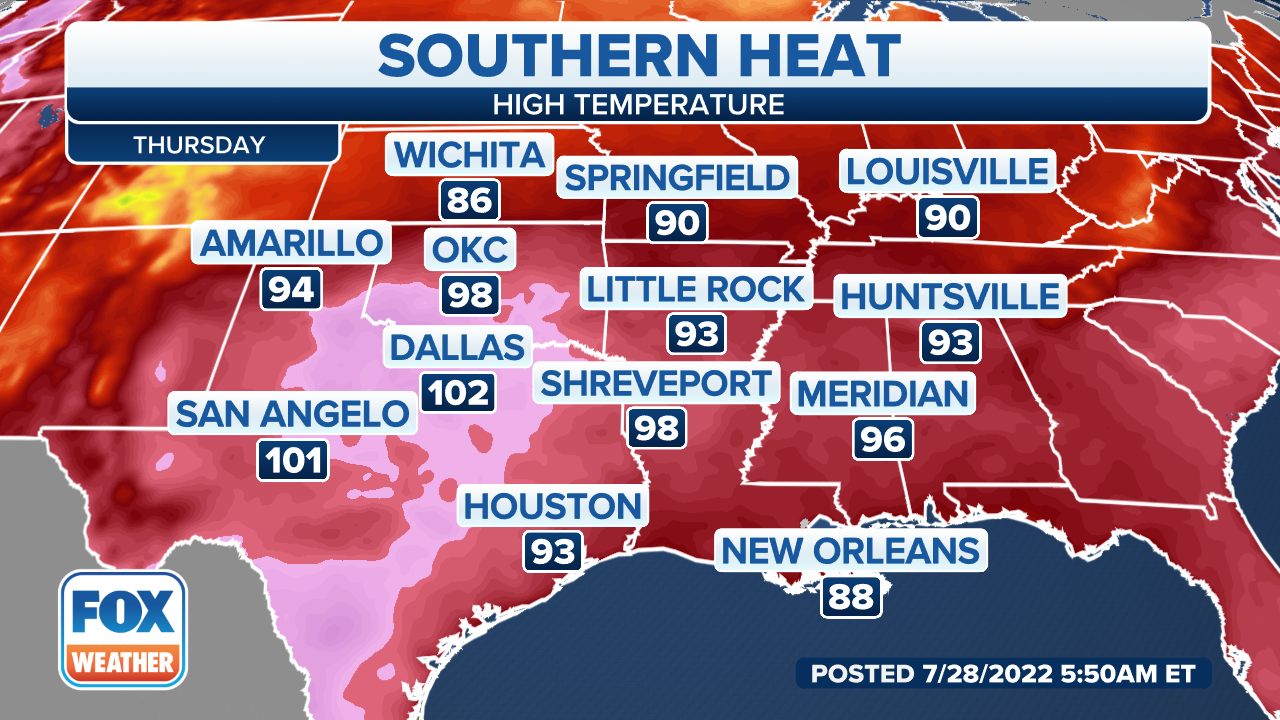 A weak front that has dropped into the southern Plains and lower Mississippi and Tennessee valleys is expected to bring some thunderstorms and slight relief from the heat to parts of the region on Thursday.

However, it will remain hot and humid, with Heat Advisories continuing to cover parts of eastern Oklahoma and Texas, as well as much of the lower Mississippi and parts of the Tennessee valleys. 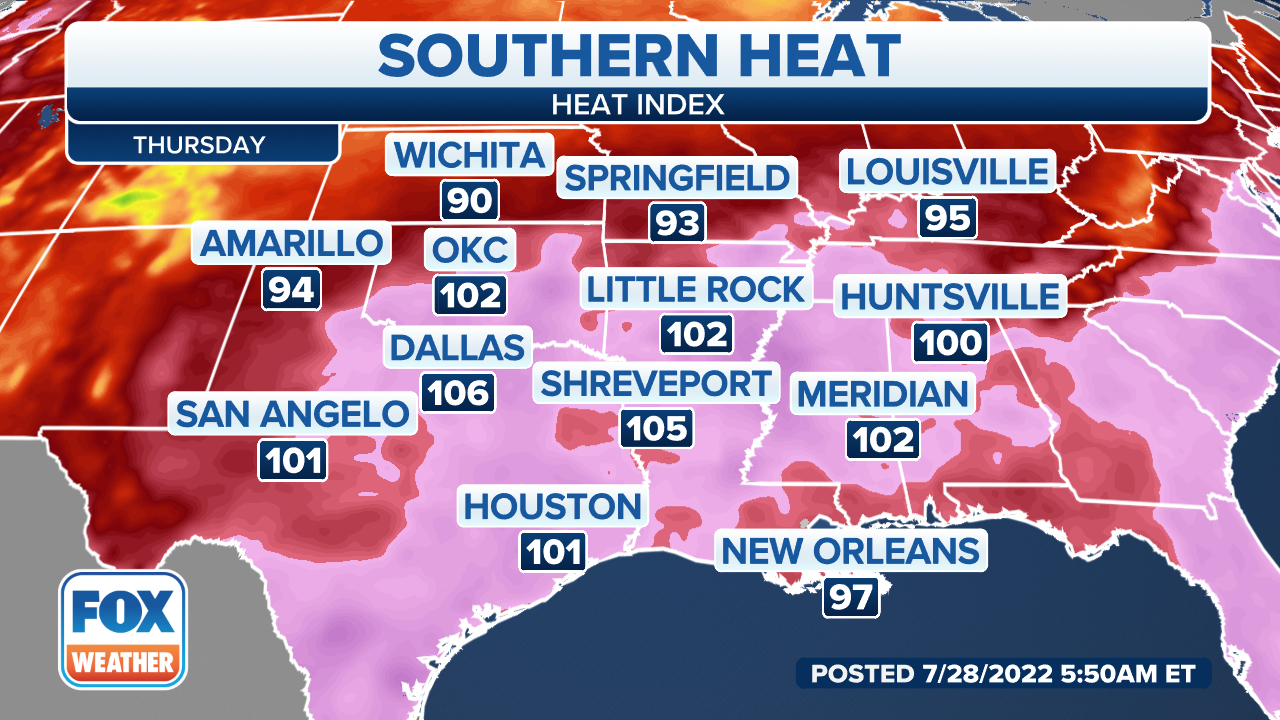 Temperatures during the day are expected to remain above average, with daytime heat index values above 100 degrees.

Dallas and Shreveport, Louisiana, will feel like it's 109 degrees or hotter during the afternoon hours.

Houston, too, will feel quite hot with a heat index value of 107 degrees.

The heat is also breaking records across the region.

At 5 p.m. Wednesday, the temperature was a sweltering 97 degrees with a dew point of 83 degrees.

WHAT IS THE 'FEELS-LIKE' TEMPERATURE

The summer scorcher will continue in the Northeast and New England on Thursday, with many areas seeing temperatures in the 90s.

Very hot and humid air has also moved into the East, with Heat Advisories in effect from the Carolinas to New England on Thursday.

Temperatures will generally be in the upper 80s to mid-90s across the region. Washington will hit at least 95 degrees during the afternoon, with New York City expected to hit 93 degrees. 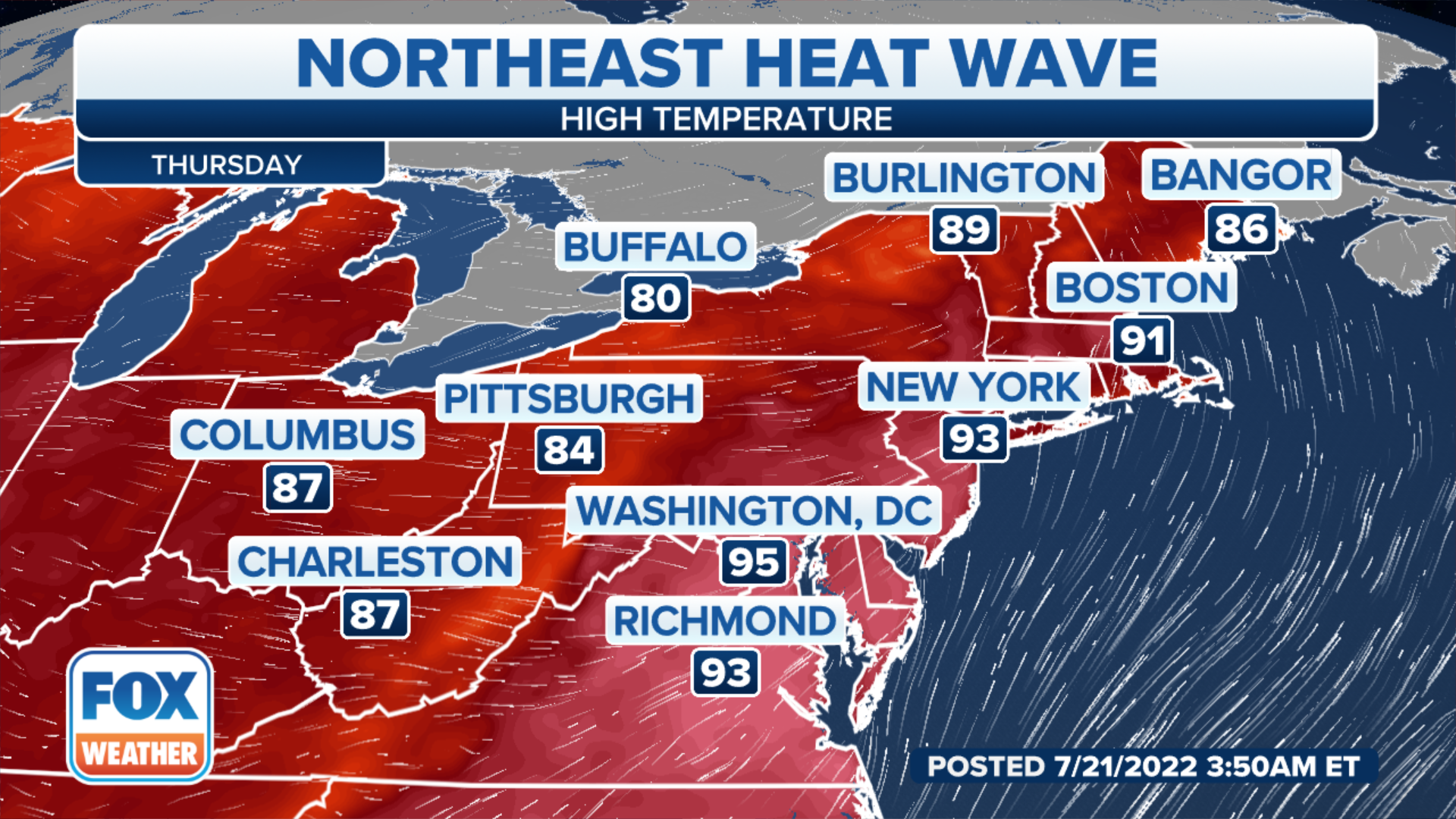 High temperatures in the Northeast on Thursday, July 21.
(FOX Weather)

In Boston, which sits closer to the coast, a high temperature of 91 degrees is expected.

In northern New England, temperatures will be slightly cooler. Burlington, Vermont, will be around 90 degrees, and Bangor, Maine, should remain in the mid-80s. 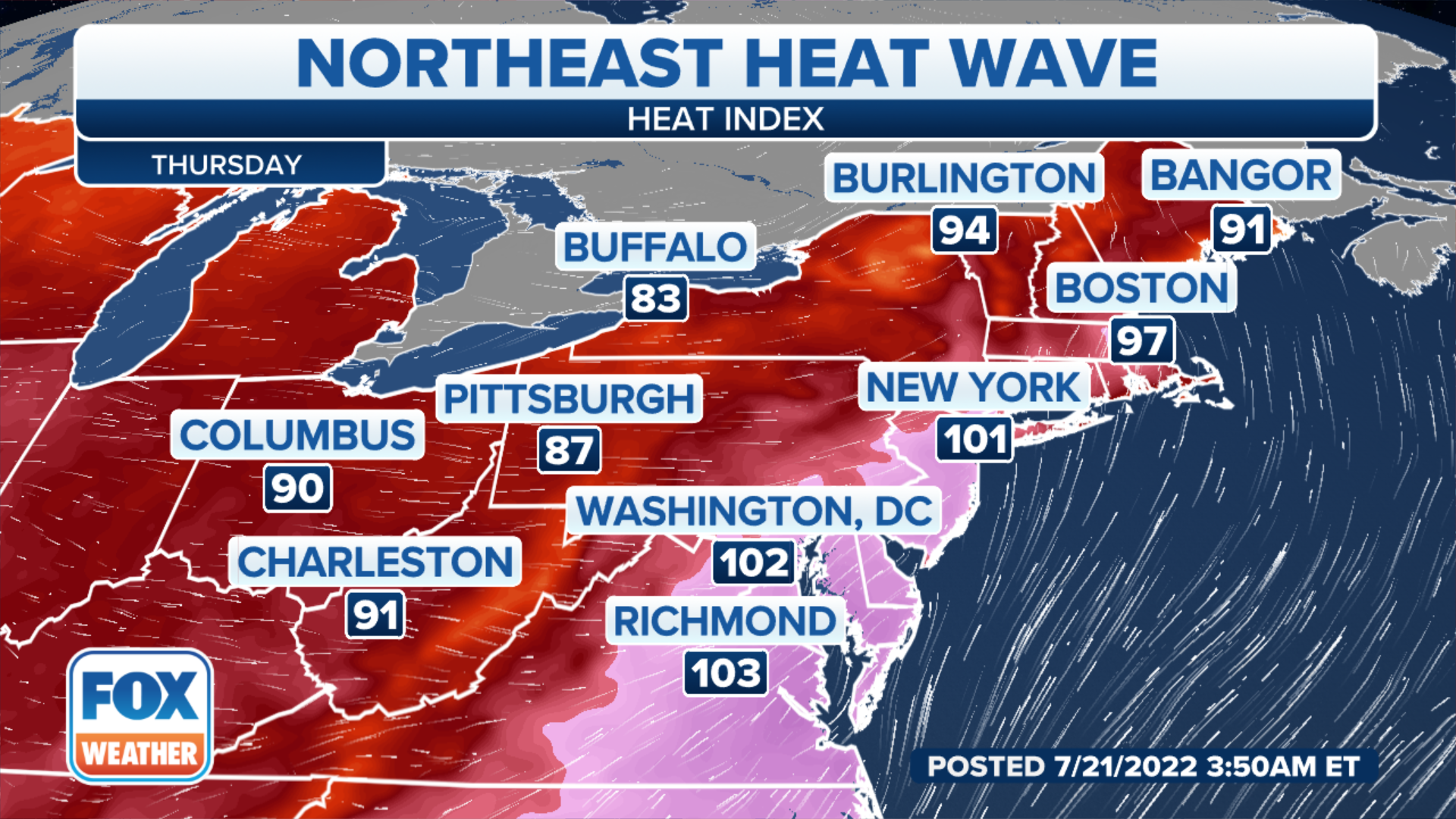 "When you factor in the dew points, that is a measure of the moisture in the atmosphere, it is going to feel very soupy across the mid-Atlantic as well as the Northeast," FOX Weather meteorologist Jason Frazer said.

Richmond, Virginia, will feel like 103 degrees on Thursday afternoon, with Washington feeling one degree cooler at 102 degrees.

The Big Apple will also feel the heat, with a heat index value of 101 degrees expected. 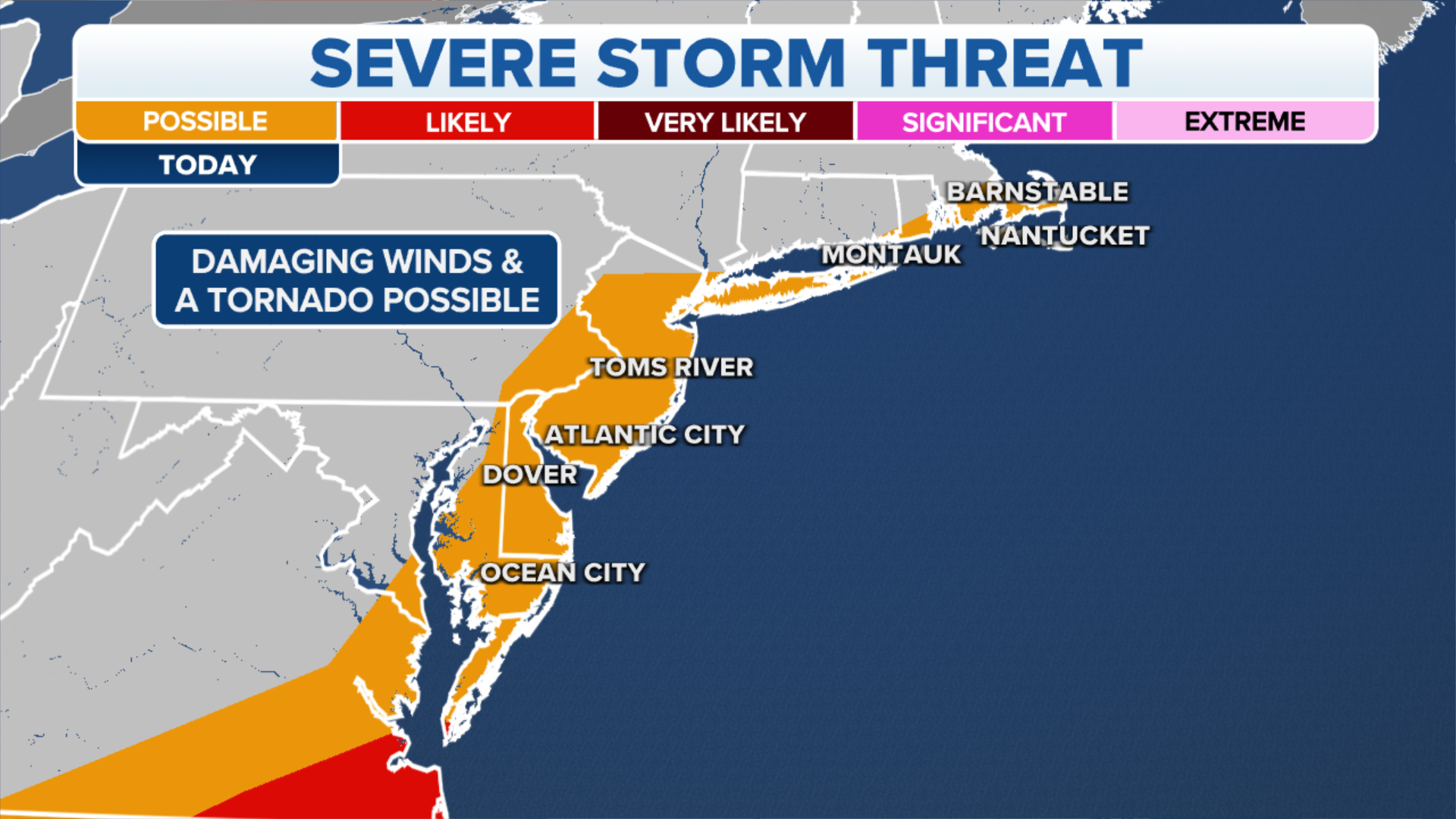 In addition to the heat and humidity, a slow-moving cold front will advance into the East from the Ohio Valley, bringing showers and thunderstorms to the eastern United States.

Some of those storms could be strong to severe, especially across portions of the Northeast. From eastern New York state and into New England, conditions will be favorable for severe thunderstorms producing strong winds, cloud-to-ground lightning and some hail. 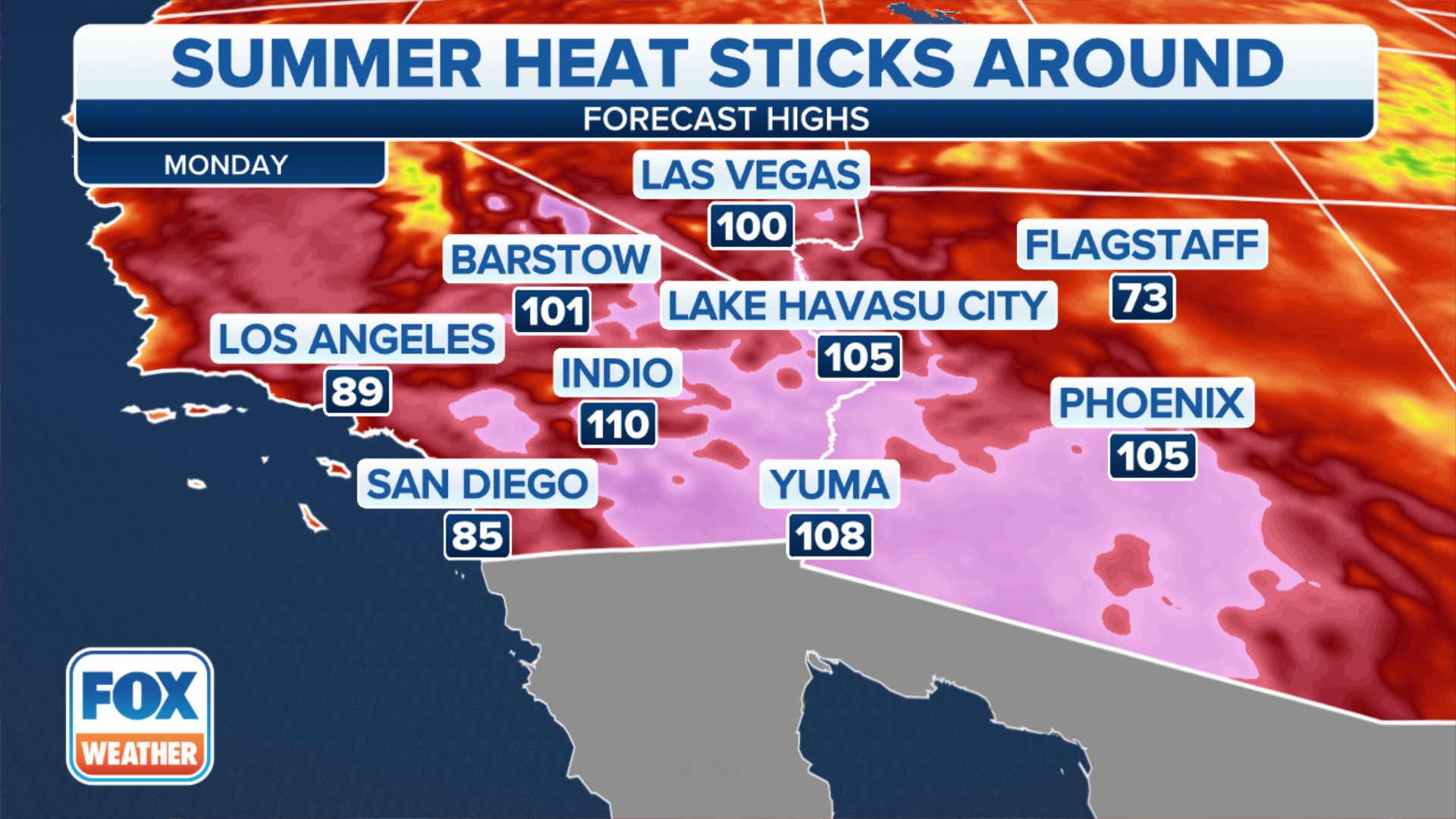 Temperatures in the Southwest on Thursday, July 21.
(FOX Weather)

Temperatures will also soar in the Southwest on Thursday.

High temperatures will be above 100 degrees in several locations across the region.

Needles, Nevada, is expected to hit 118 degrees during the afternoon, and Las Vegas will see a high temperature of around 113 degrees.

Phoenix and Yuma, Arizona, will see a high temperature of around 113 degrees.

As these temperatures continue to skyrocket, it's imperative to take the proper precautions to stay cool and stay safe.