James Brotherton, Meteorologist at NWS San Diego, discusses the major areas of concerns, which will be the downslope winds off the mountains and the heavy rain.

It's been 83 years since a tropical cyclone last made an official landfall in California, and Tropical Storm Kay will not end that streak because it won't actually move onshore in the Golden State. However, that doesn't mean cities such as Los Angeles and San Diego will be spared the former hurricane's rain and wind impacts.

According to the FOX Forecast Center, Kay is forecast to produce heavy rain and high winds across Southern California on Friday and Saturday as the center of the tropical storm moves away from Mexico's Baja California Peninsula and tropical moisture surges northward into the southwestern U.S.

Click here for Tropical Storm Kay's predicted impacts on the Baja Peninsula, where bands of heavy rain and gusty winds will persist at times on Friday. 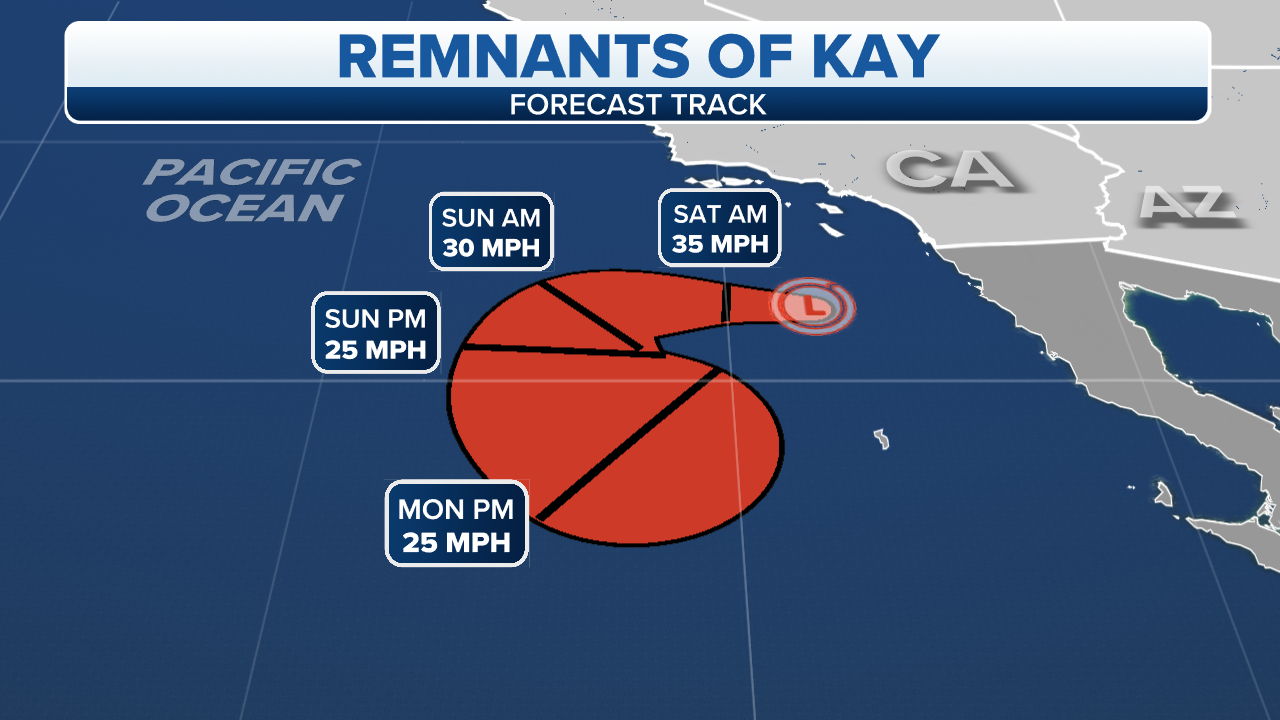 How much rain will Tropical Storm Kay dump on Southern California?

Rainfall amounts of 2 to 4 inches, with isolated maximum totals between 6 and 8 inches, are possible through Saturday in parts of Southern California.

This amount of rain is likely to produce flash flooding and small-stream flooding in some locations, especially near recent burn scars and along the eastern slopes of the Southern California mountains. 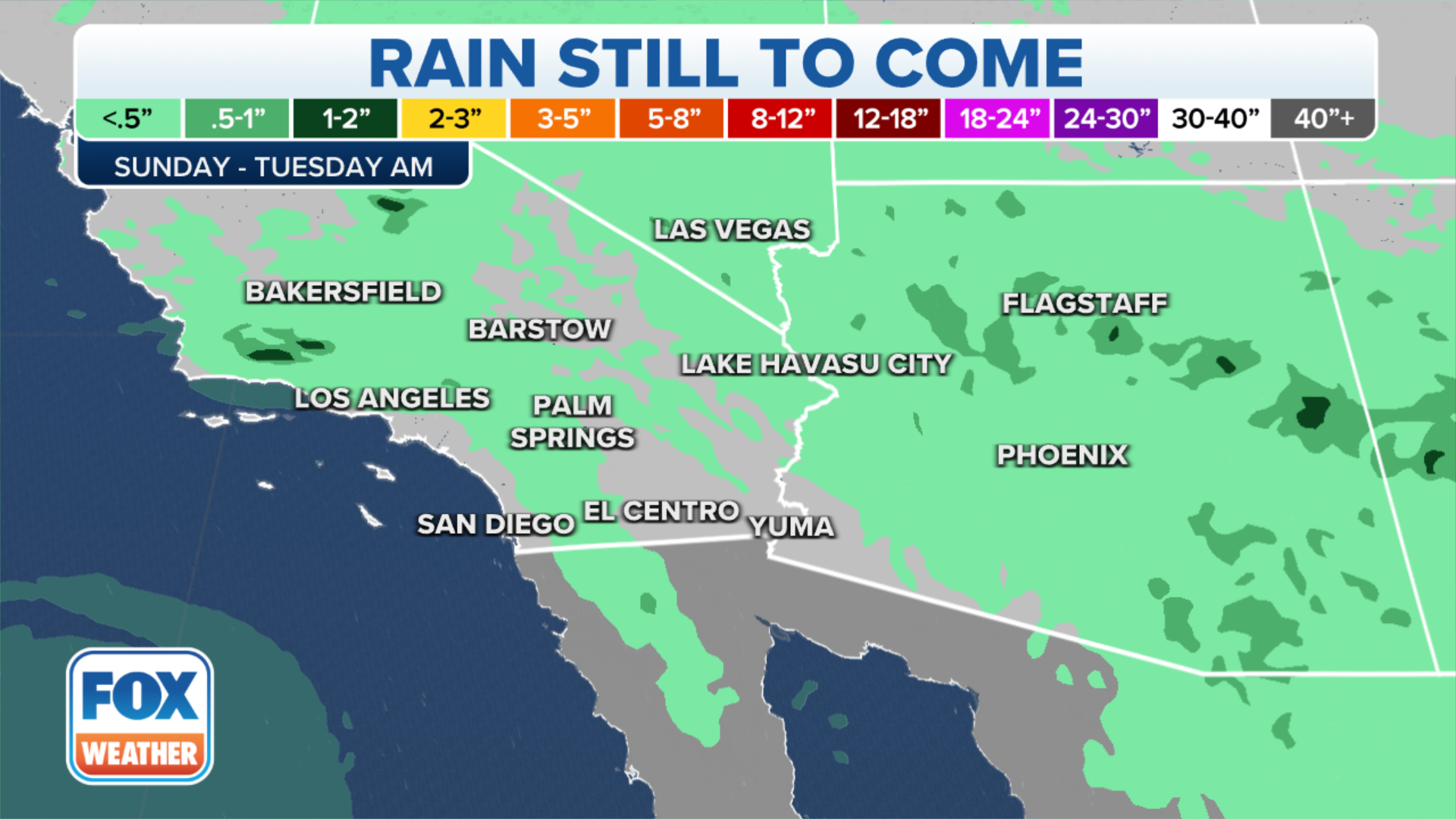 "The heaviest rain today is really from Palm Springs all the way to Barstow," FOX Weather meteorologist Britta Merwin said. "As we get into Saturday, that's when the rain is going to be lifting north. Kay is, at that point, just going to be an area of low pressure – a remnant low moving off to the open Pacific – but that moisture fetch will still be there, spreading those showers all the way up into the Sierra."

The cities of Los Angeles and San Diego are currently predicted to receive between a half-inch and an inch of rain, but higher amounts are likely to the east and southeast of those metro areas.

In several cities, the predicted rain totals are higher than their average rainfall for the entire month of September, which is generally a quarter-inch or less. 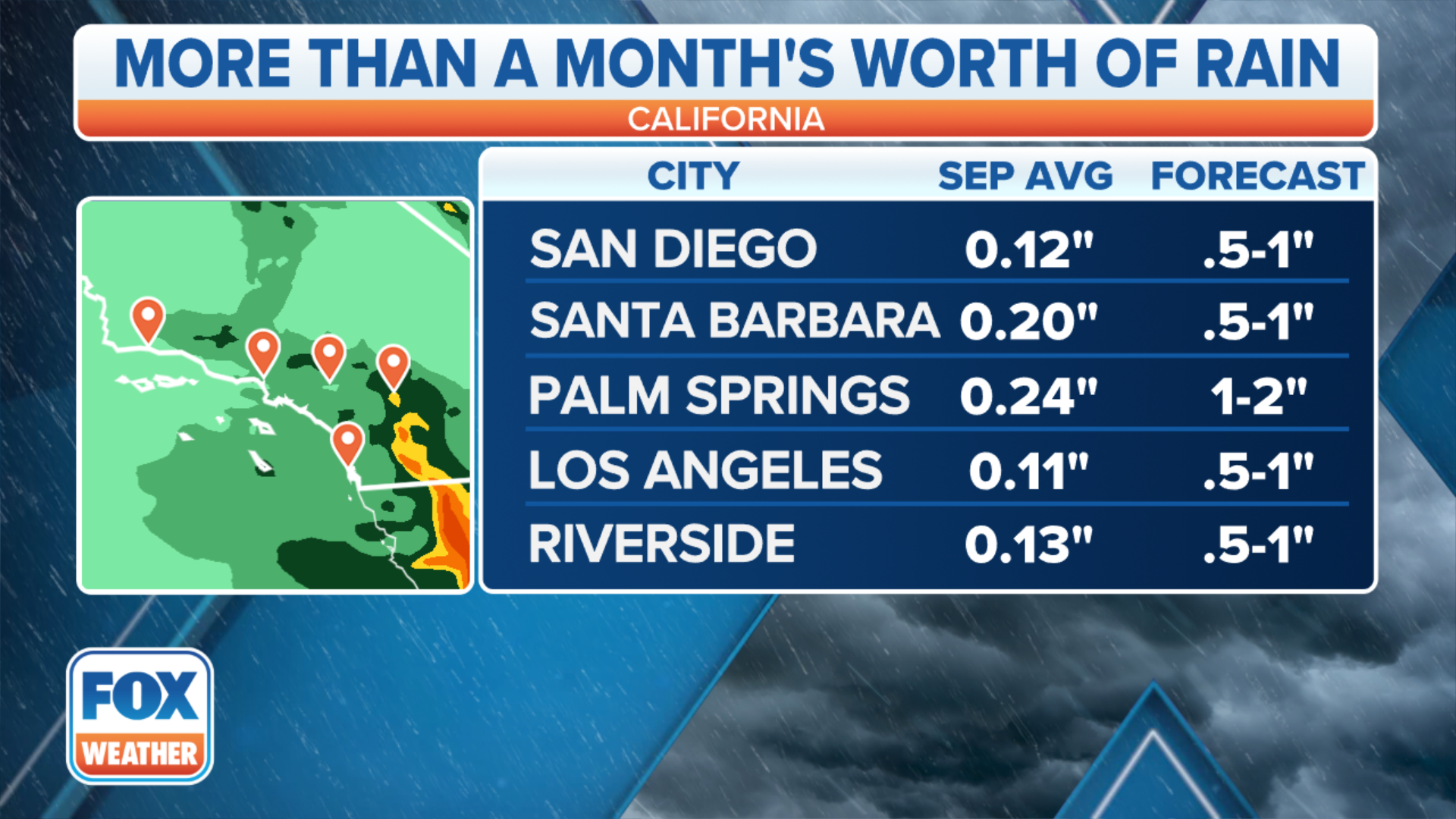 Due to the threat of flooding rainfall, Flood Watches have been issued for portions of Southern California through Saturday evening.

"It is not expected to make a direct landfall to Southern California, but it will spread its tropical moisture into the region throughout the day today into tomorrow ," FOX Weather meteorologist Jane Minar said. "We're mostly concerned with Southern California along that I-8 corridor into extreme southwestern Arizona. That's where we could see the greatest threat for flooding." 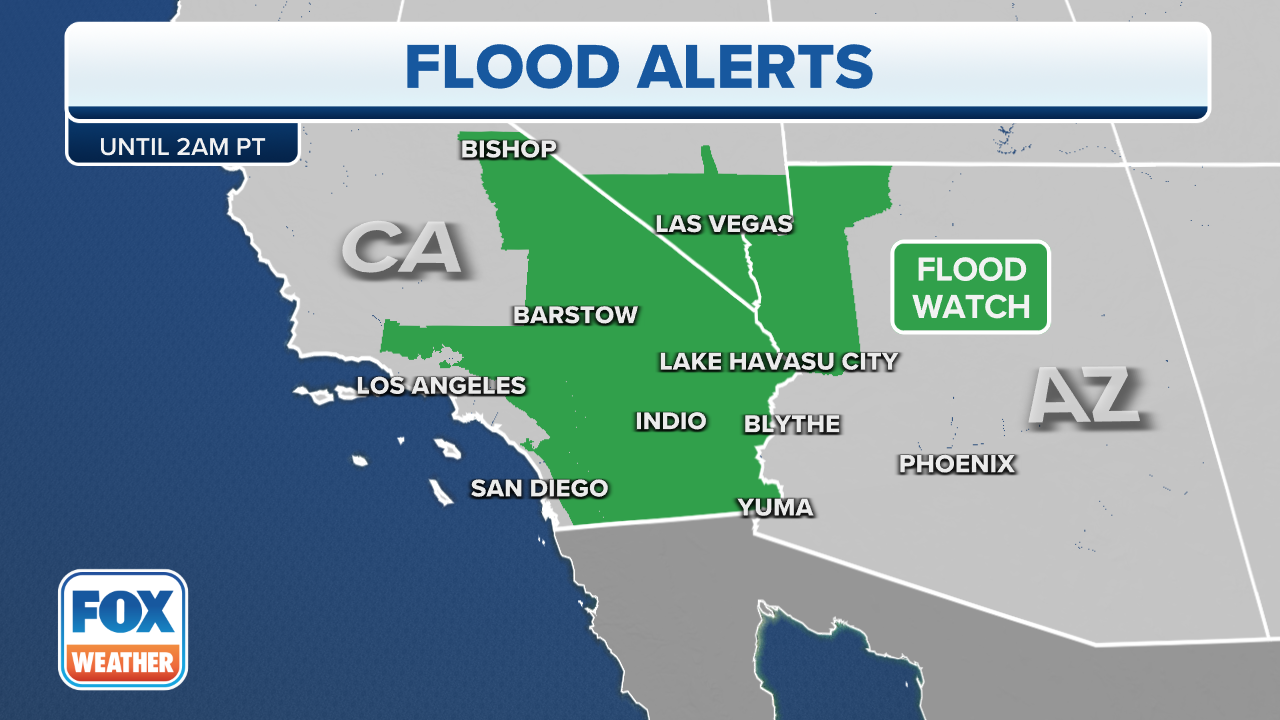 Flood Watches are in effect for parts of Southern California.
(FOX Weather)

How high will the winds be from Tropical Storm Kay in Southern California?

High winds are expected in Southern California, particularly on Friday.

High Wind Warnings and Wind Advisories have been issued for parts of Southern California into Friday night.

WHAT YOU SHOULD KNOW ABOUT HIGH WINDS 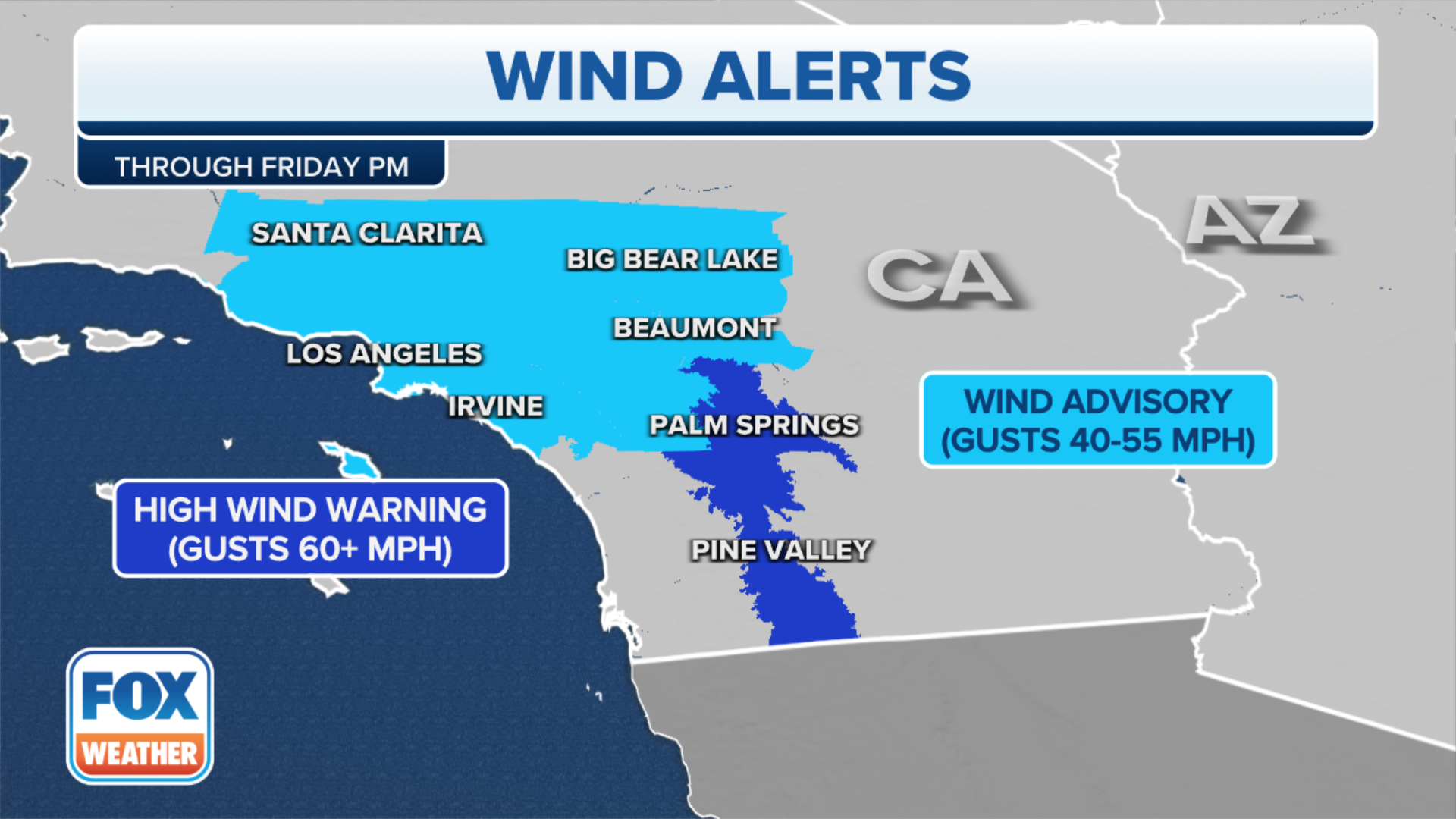 Wind alerts are in effect in Southern California.
(FOX Weather)

The National Weather Service in San Diego reported that a wind gust of 109 mph was measured at Cuyamaca Peak in the San Diego Mountains on Friday morning.

Unfortunately, the strong winds have arrived before the heavy rain, and that could increase the fire danger in California which already has nearly a dozen wildfires burning across the state.

According to the FOX Forecast Center, wind gusts could top 70 mph in the mountains, with gusts between 40 and 60 mph expected in the valleys. These high winds will have the potential to knock down trees and power lines, which could result in power outages. 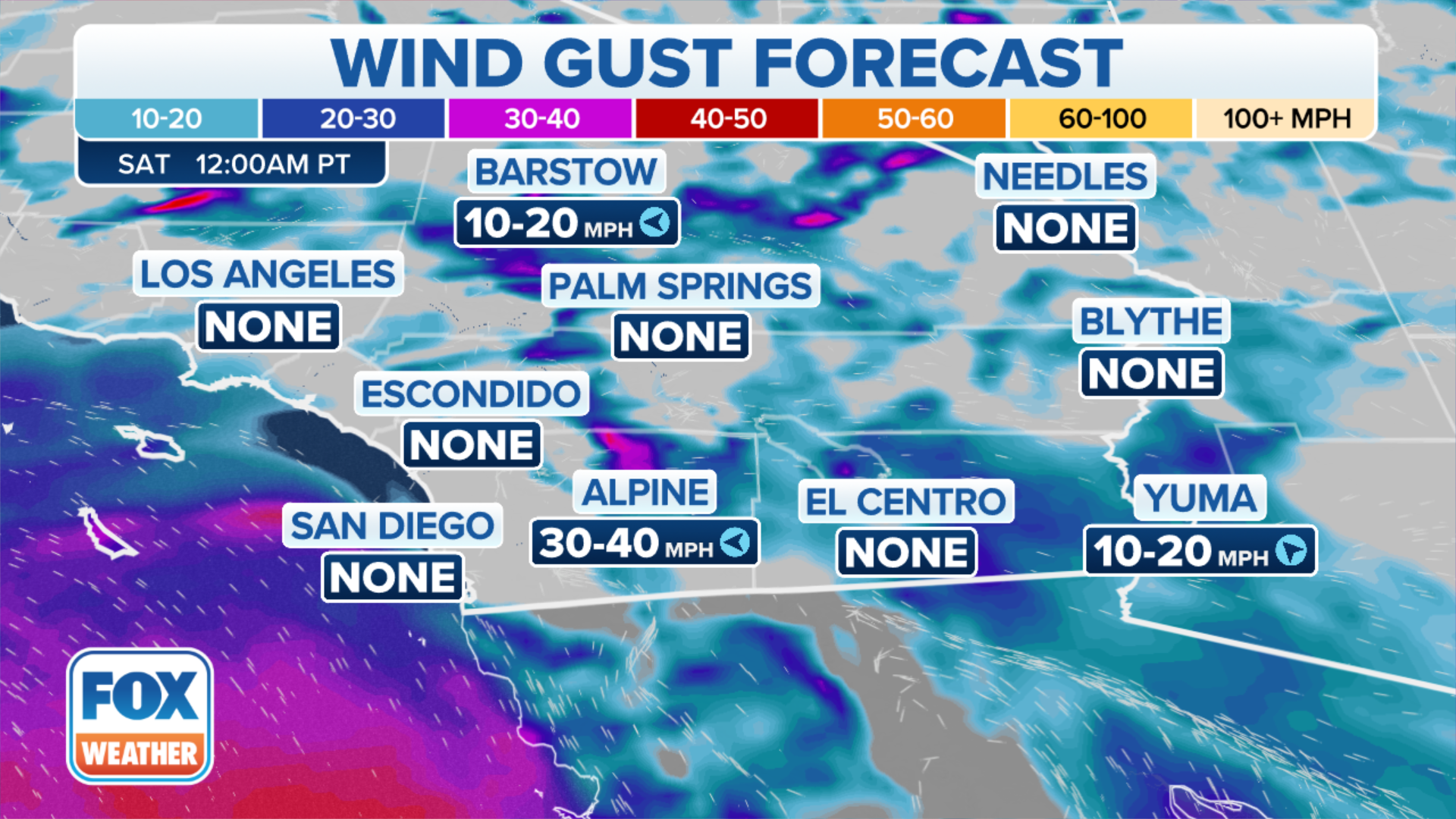 Tropical Storm Kay is also expected to churn up the surf along the beaches of Southern California, leading to the development of life-threatening rip currents.

"Tropical System Kay will bring increased surf, an increased risk of strong rip currents, and potential for minor coastal flooding and beach erosion to the coastline south of Point Conception starting Friday," the National Weather Service in Los Angeles noted in a forecast discussion. "Surf should peak on Saturday, with the largest waves affecting south-facing beaches of Ventura and LA Counties and Catalina Island." 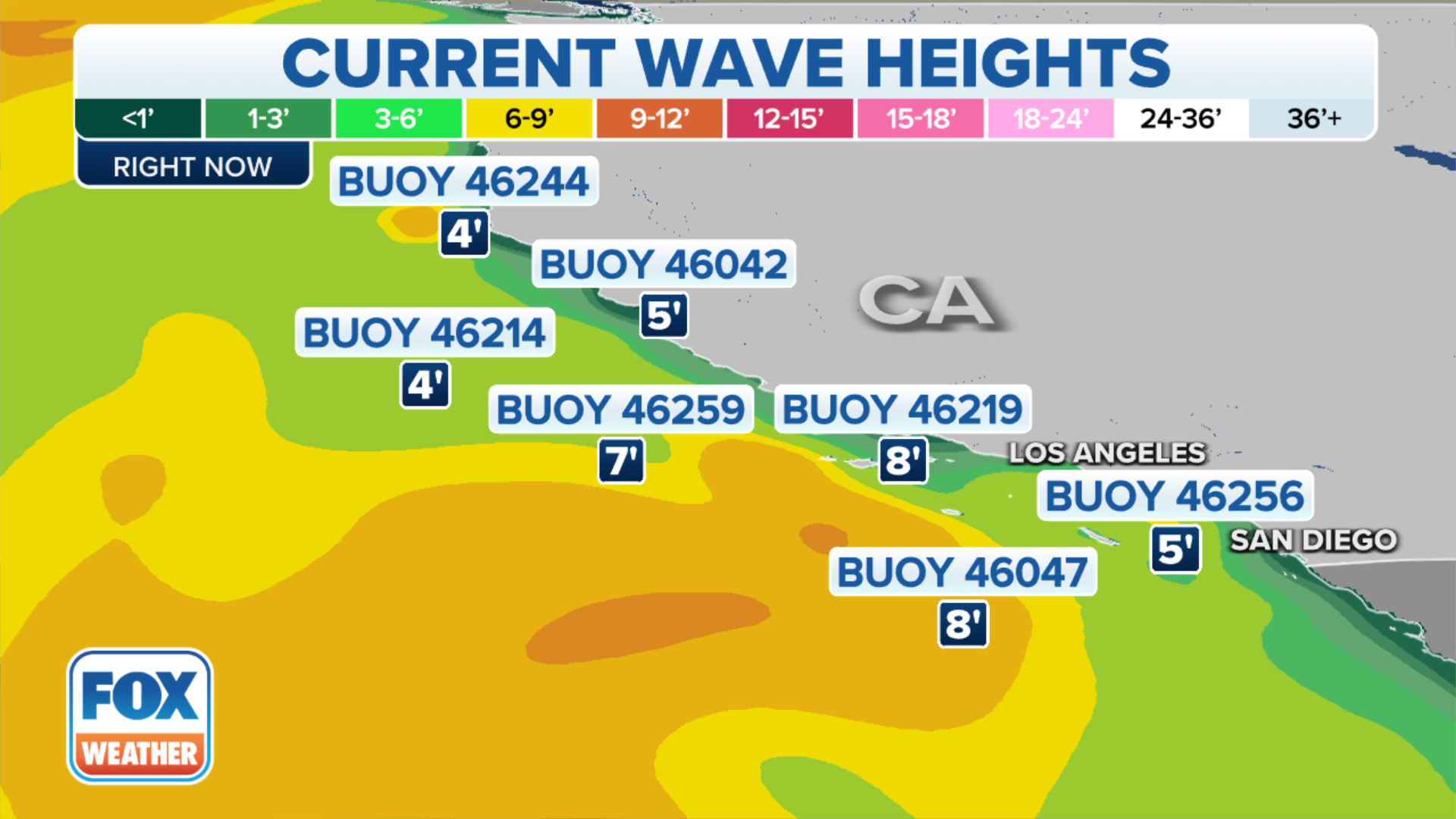 Conditions in California will improve by Sunday as Tropical Storm Kay turns west and southwestward, moving farther away from the Pacific coastline.

The good news is that the increased cloud cover from Kay will allow the historic days-long extreme heat event in California to finally come to an end.