More than 150 record high temperatures in jeopardy across the South, Plains

Temperatures will soar across the South and Plains to start the week, putting more than 150 records in jeopardy.

A dangerous early-season heatwave will shatter dozens of record highs from Texas to the South and Midwest as temperatures soar into the 90s and 100s through the weekend into the workweek.

A large northward bulge in the jet stream will set up over the south-central U.S. this weekend and continue to build across the central and eastern states through much of next week, causing a strong upper-level area of high pressure to park itself over those regions. 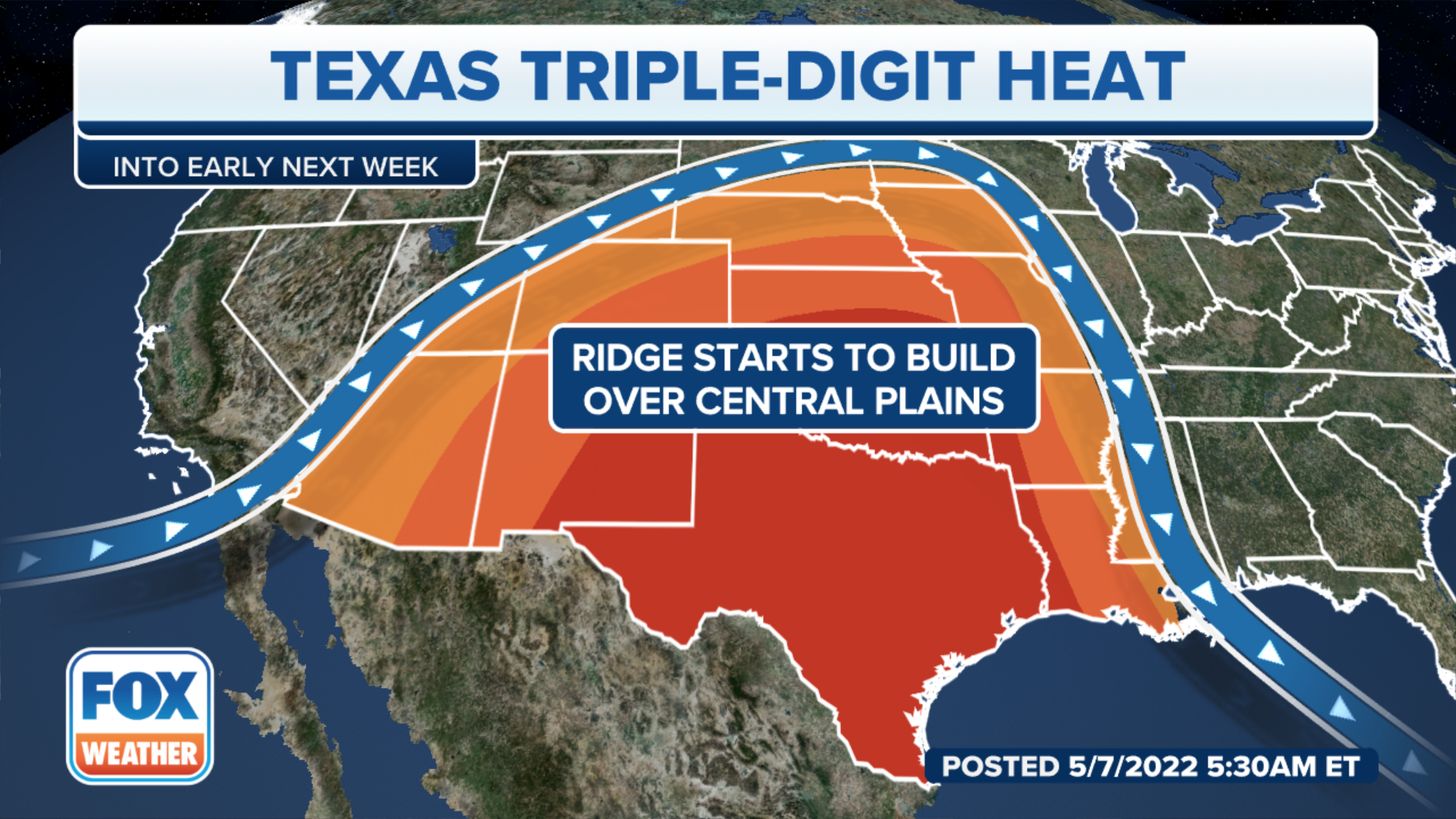 Sinking air beneath a high-pressure system allows for plenty of sunshine and above-average temperatures, often setting the stage for a prolonged stretch of hot weather this time of year.

The heat started to build in the Southern Plains on Friday, and peaked in that region over the weekend before expanding into parts of the South and Midwest for the work week.

Nearly the entire state of Texas saw high temperatures near or above 95 degrees on Sunday. 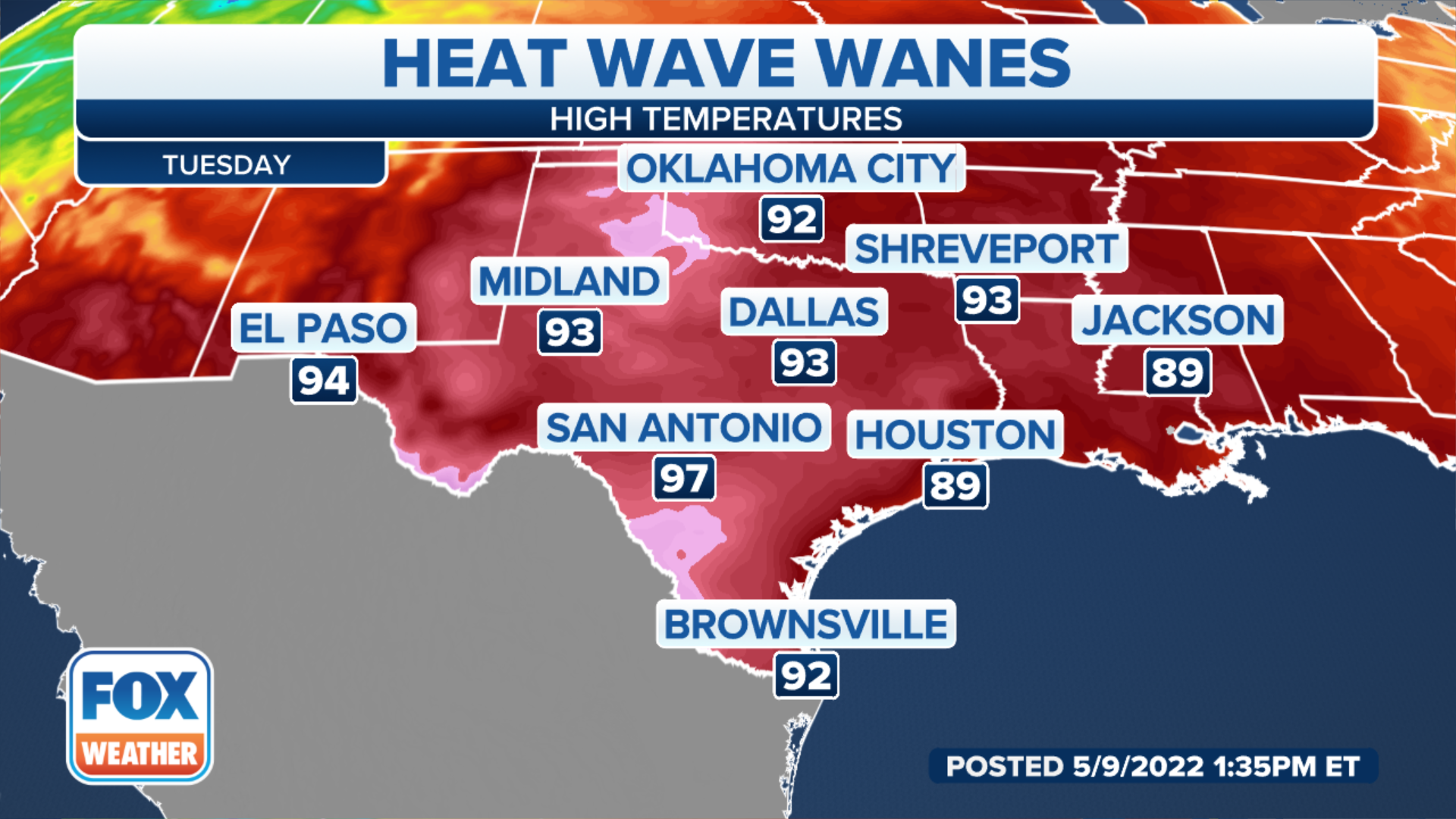 Dallas doesn't typically see its first 95-degree day until late May, while Houston usually waits until early June to reach 95 degrees for the first time. The first 100-degree temperature in San Antonio is typically not until late June but the past two days hit the century mark.

Austin, Texas broke their record of 97 Sunday by a degree and 20 other cities throughout the state came close.

More than three-dozen daily record highs will be threatened Monday, and nearly four-dozen records will be in jeopardy Tuesday, from Texas to Mississippi and northward to Kentucky and Missouri. 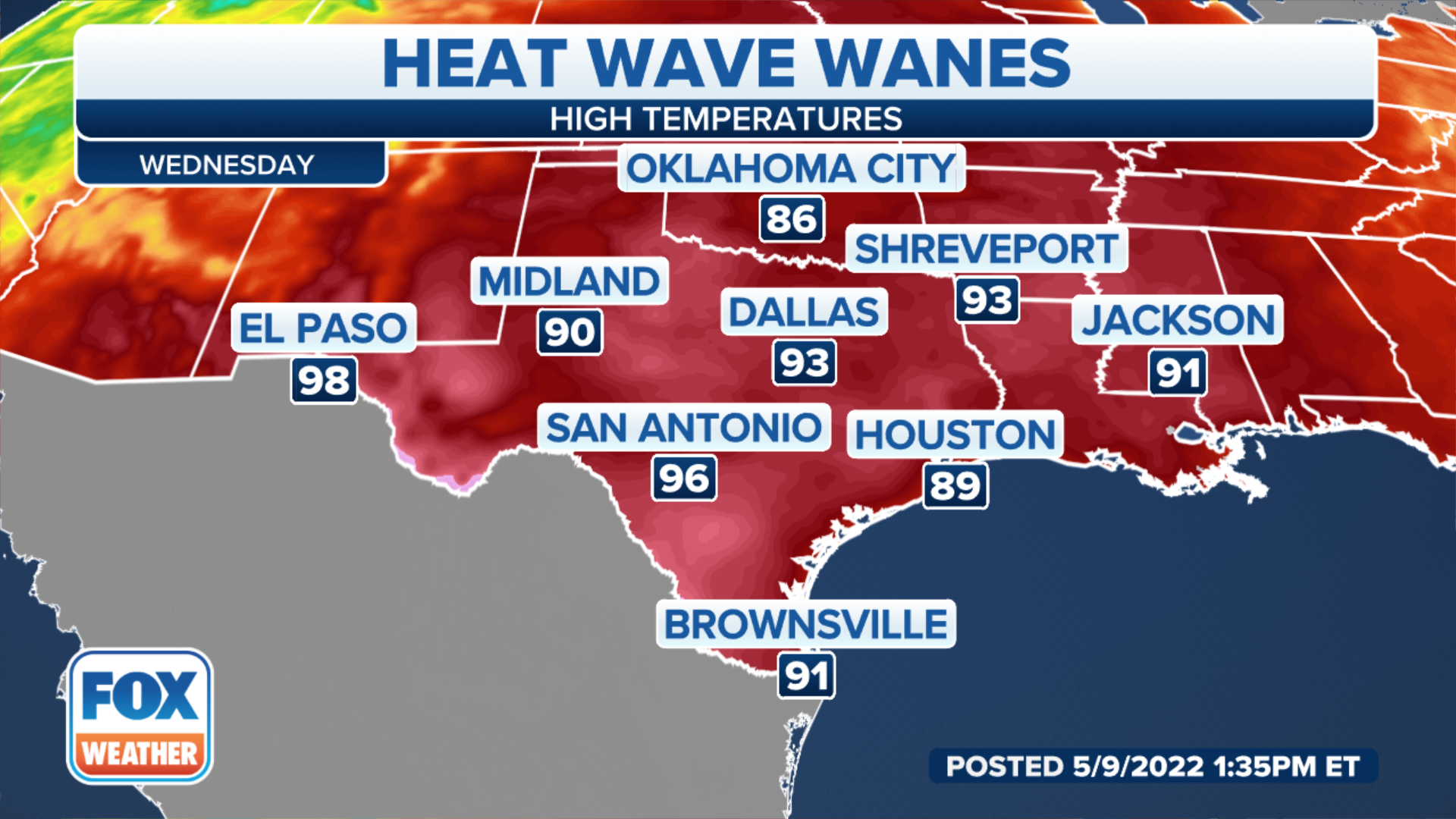 Over the first few days of the work week this heatwave will expand farther north and eastward. 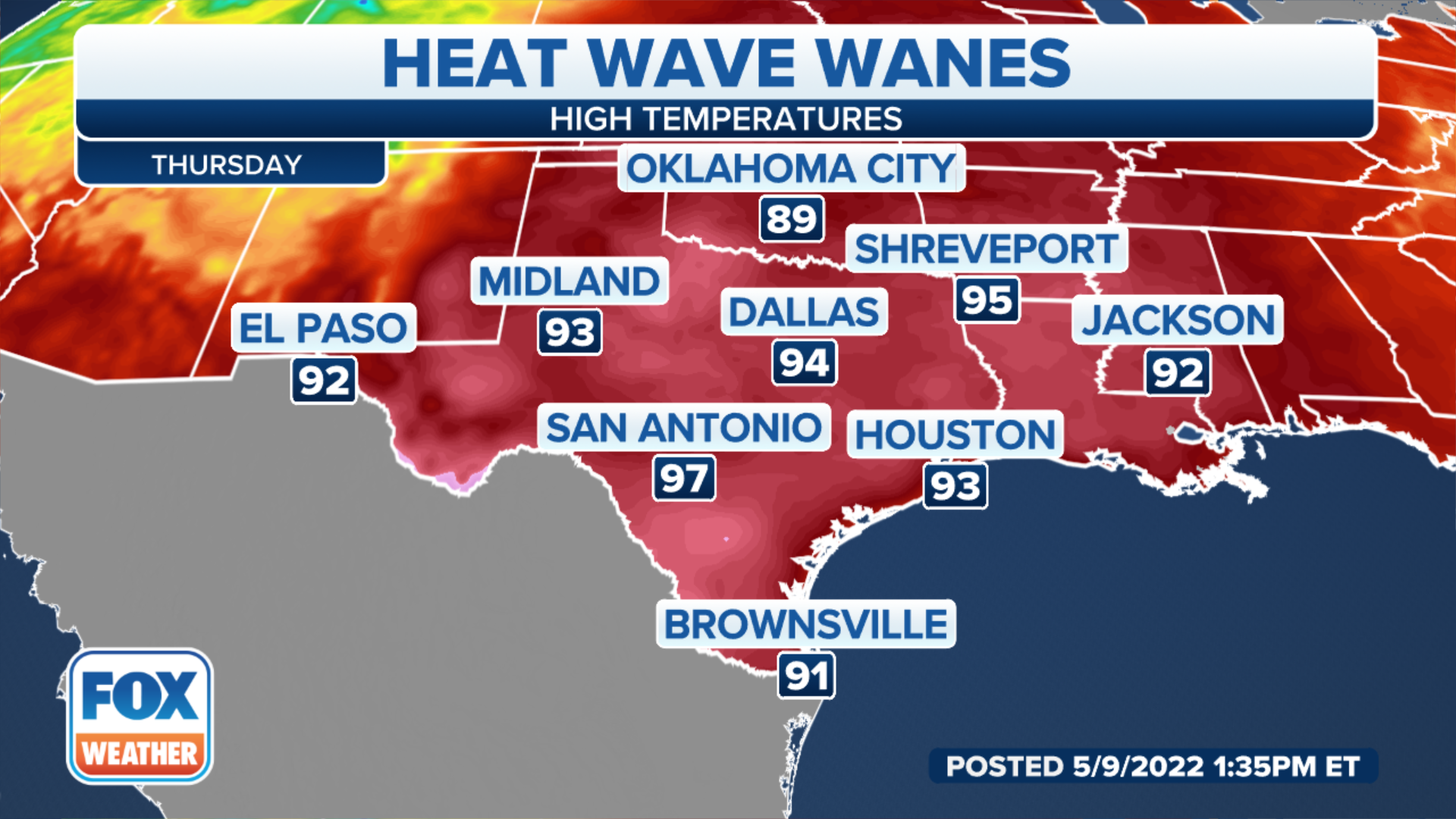 Highs in the 80s will even spread northward into the Great Lakes and Northeast by the middle of next week. On Wednesday, records could be challenged as far north as southern Wisconsin. 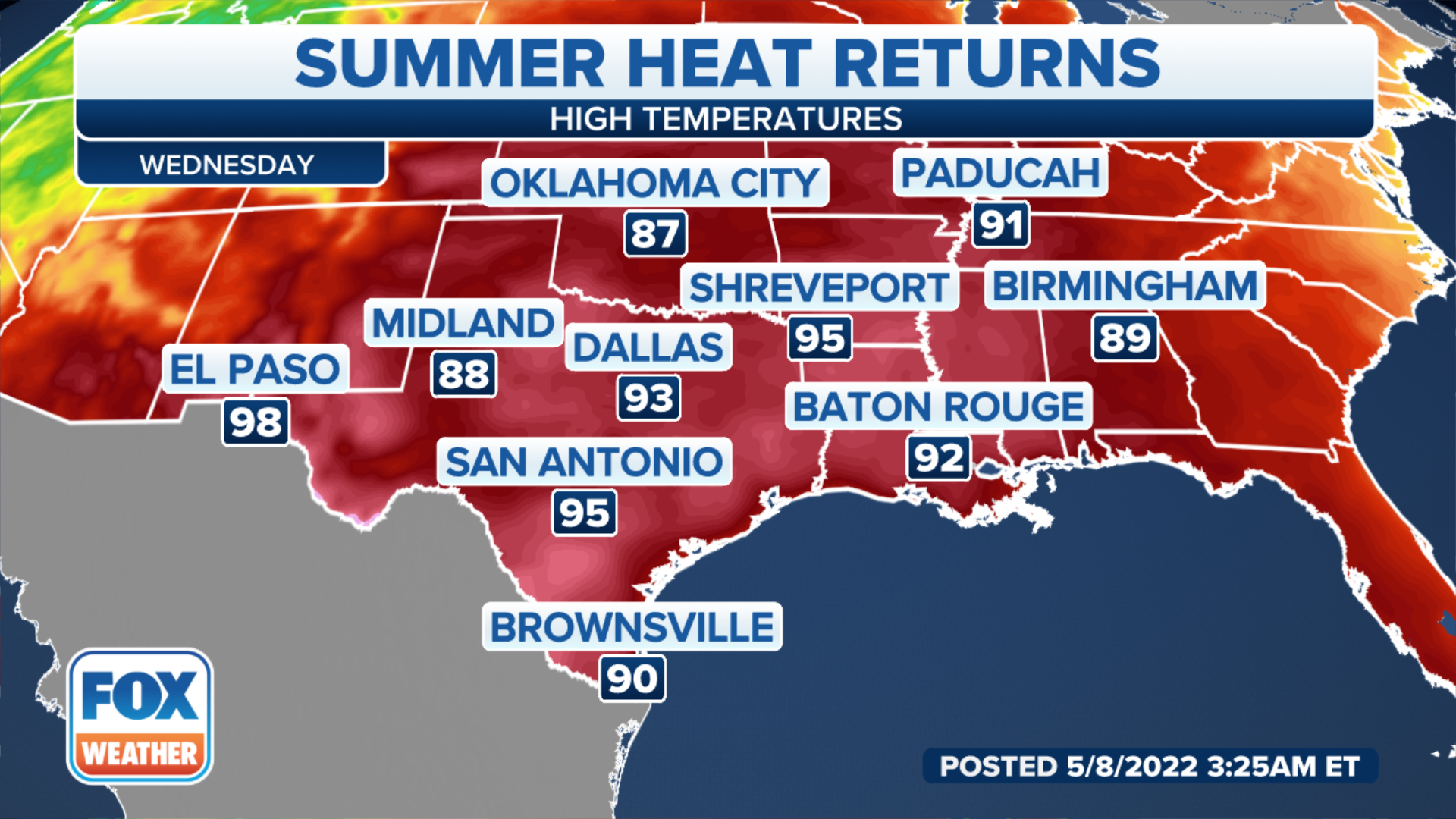 Since it's still early in the season, it will take some time to adapt to the warmer temperatures ahead over the next several months. Even if the National Weather Service does not issue any Heat Advisories or Excessive Heat Watches and Warnings, it's important to stay hydrated and take frequent breaks if you'll be spending time outdoors during this upcoming heatwave.