Seattle has seen three consecutive days of 75+ degree highs in October, the first time on record to do so.

SEATTLE – Back in August when fall-themed drinks were released nearly a month ahead of the autumnal equinox, we pondered whether they were too early and what kind of weather really does warrant the mood needed for that kind of seasonal bliss.

Turns out, we're still too early in the Pacific Northwest this year, where summer has totally ignored the calendar – and the local coffee chain menu – and steamrolled right into October.

It's been several days of sunshine and well-above-average temperatures to end September in the Northwest, and October is, if anything, beginning even warmer.

Monday hit 78 degrees, which gave Seattle another first – the first time in the city's recorded history there have been three consecutive days of 75 degrees or warmer in October. 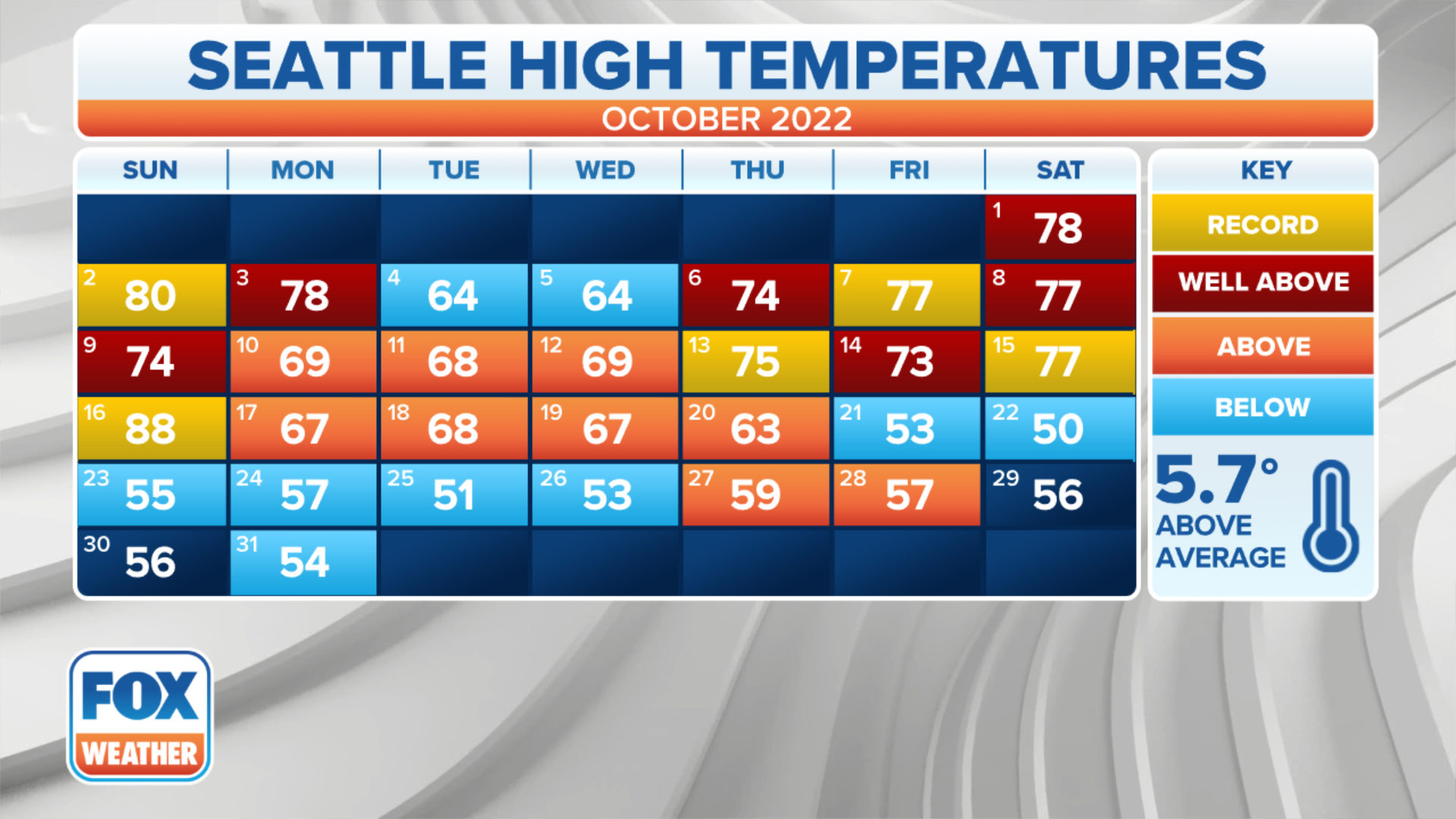 And with the heat has come a lack of rain. A 21-year playoff drought may have ended for their beloved Seattle Mariners last Friday, but July through September was Seattle's warmest and driest on record.

Rainfall-wise, the city tallied just 0.48 inches of rain. It's rained on only 11 dates since July 1 – a reverse from the 50 days it rained in the 90-day period from April to June. There is no rain in sight for the first two weeks of October.

"It’s not just Seattle – the entire area is ranging about 20 to 30 degrees above average for this time of year," FOX Weather meteorologist Britta Merwin said. "We’re staying warm across Washington, Oregon and Idaho."

Just to the south, Portland, Oregon, broke its warmest July-to-September period on record with an average temperature of 72.8 degrees, beating the old record of 70.9 set in 2014.

And after a brief cooldown for the middle of the week, summer returns from Thursday into the weekend with highs in Portland expected in the lower to mid-80s.

"Portland ... 69 degrees is what we would typically have this time of year," Merwin said. "We’re in the 70s for (Tuesday and Wednesday), and then we’re into the 80s for Thursday all the way into the weekend. So hopefully you have a way to beat the heat, maybe get outside and do a little hiking because the weather will be nice and warm and on your side."

Over in eastern Washington, Spokane rewrote its same record entry with an average temperature of 71.9 degrees. Eastern Oregon finished the period much warmer than average too, and the warmth keeps on going.

Summer remains in charge through the first half of October

Summer in autumn may be unusual, but it shows no signs of stopping.

The 8- to 14-day extended forecast from NOAA's Climate Prediction Center shows continued above-average temperatures across the West well into the middle of October. 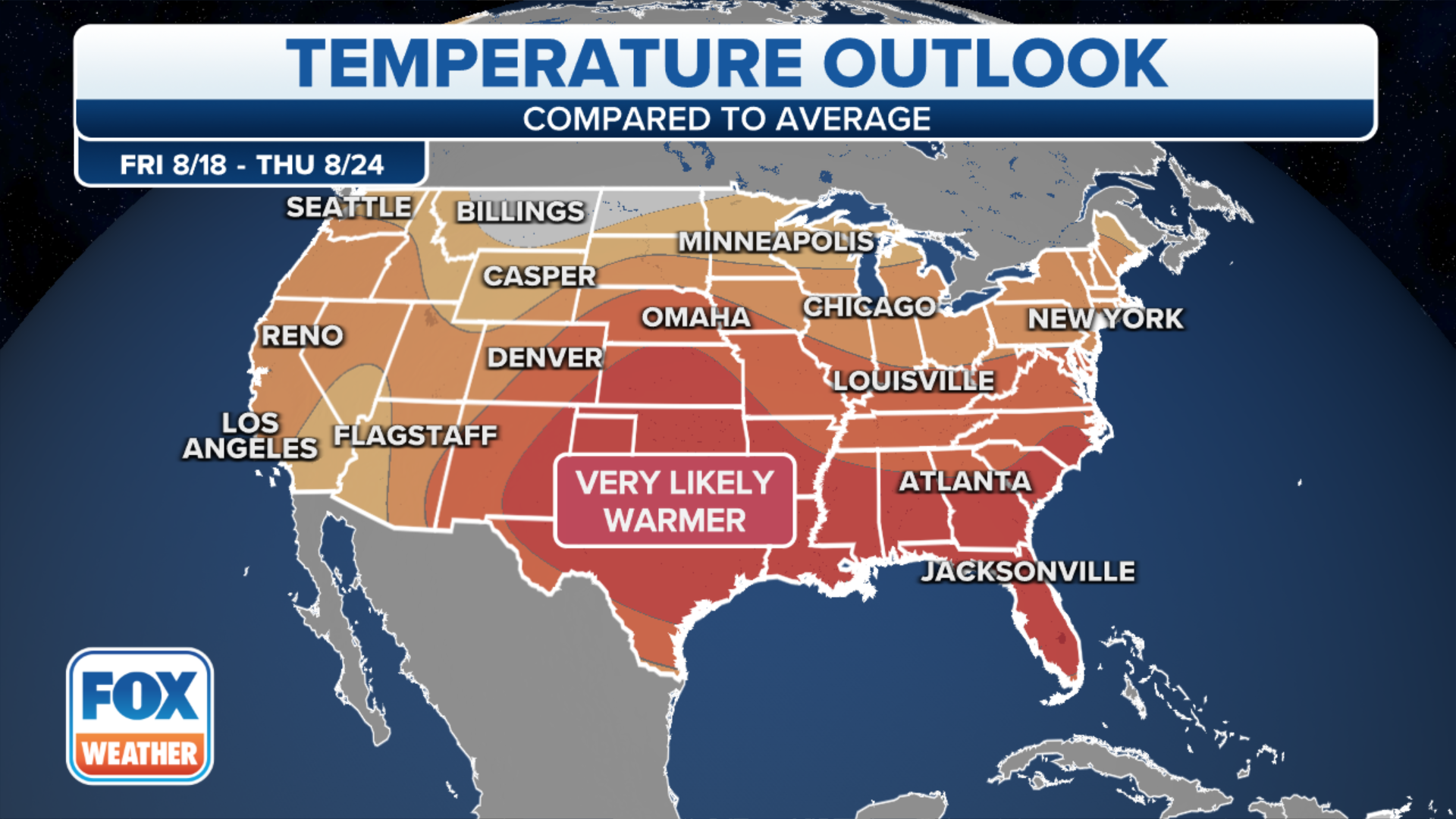 Need to find autumn? Head to the East

It may be time for pumpkin spice and trips to the corn mazes and pumpkin patches, but we may still be wearing shorts as we do so.

If autumn weather is in dire need, head to the Midwest and East Coast where the opposite pattern is entrenched.

Frost and freeze alerts were in effect earlier this week for parts of the southern Great Lakes and interior Northeast. Low temperatures dipped into the 20s and 30s across those areas, while highs struggled to get out of the 50s as far south as the mid-Atlantic states due to a stubborn coastal low keeping thick clouds in place.

Later in the week, a strong cold front may even bring some wet snowflakes to the higher terrain of Wisconsin, the Upper Peninsula of Michigan and the highest elevations of the interior Northeast.