Freeze Warnings are in effect throughout the Dakotas and northern Nebraska. Folks in these areas will wake up to temperatures as cold as the mid-20s Friday morning.

Millions of Americans across the Plains and Midwest are seeing a dramatic change as temperatures have plunged by 30 degrees in many areas.

The FOX Forecast Center says the chilly temperatures will also push into the Northeast over the weekend, reminding people that winter is right around the corner. The dramatic temperature change is all due to a potent cold front sweeping across the region.

"We've been talking all week long about the fact that this was going to be a big temperature swing," FOX Weather Meteorologist Jason Frazer said. "So, hopefully, you had a chance to take out that coat because you are definitely going to need it." 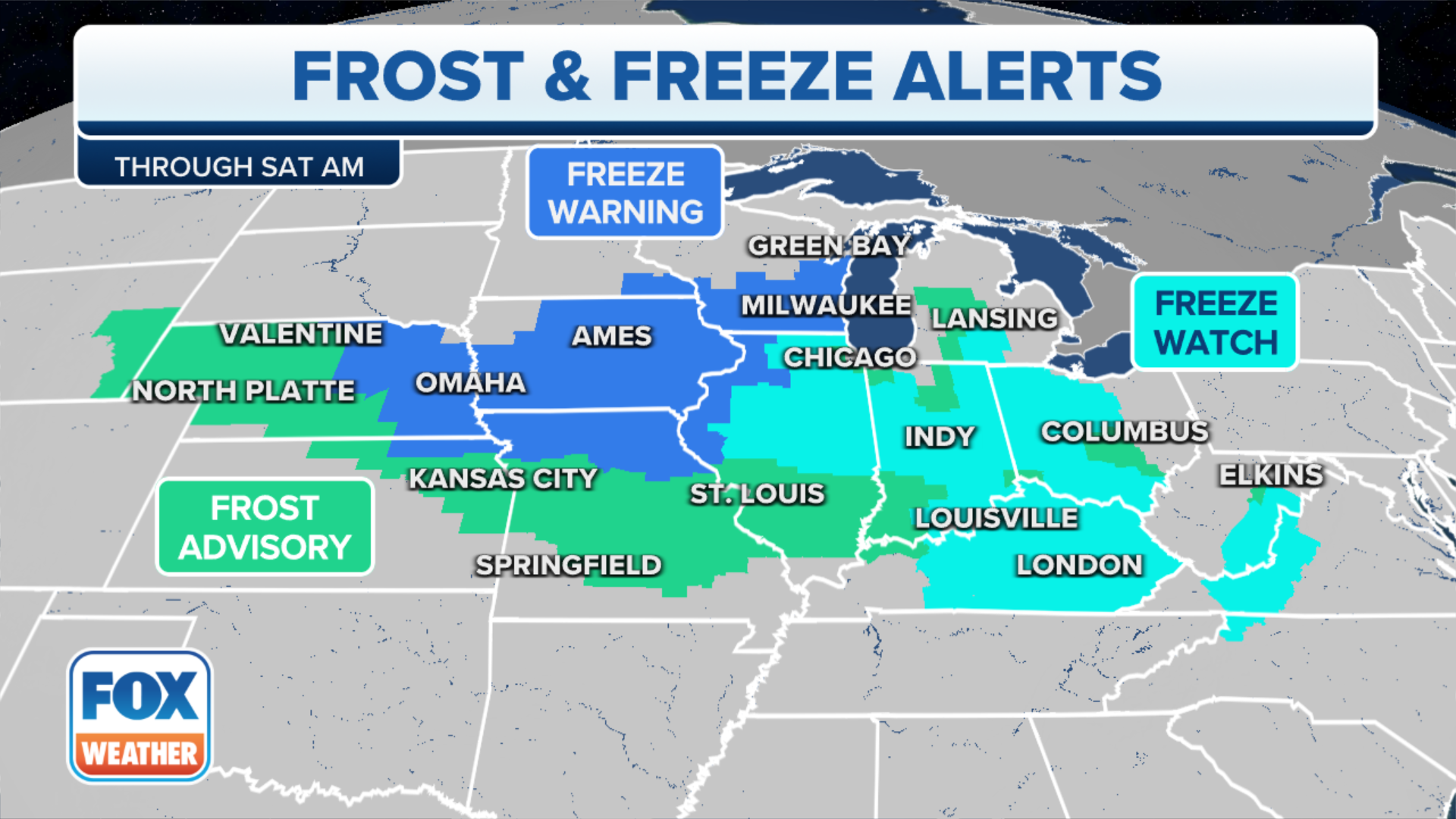 Here's a look at the frost and freeze alerts through Saturday morning.
(FOX Weather)

Freeze Warnings were in effect Friday morning throughout the Dakotas and northern Nebraska. People in these areas woke up to temperatures as cold as the mid-20s.

More than 17 million Americans could see their first widespread freeze of the year Saturday morning from the Midwest to the Ohio Valley and even parts of the Northeast, particularly north and west of the Interstate 95 corridor.

HERE'S WHEN TO EXPECT THE FIRST FREEZE OF THE SEASON 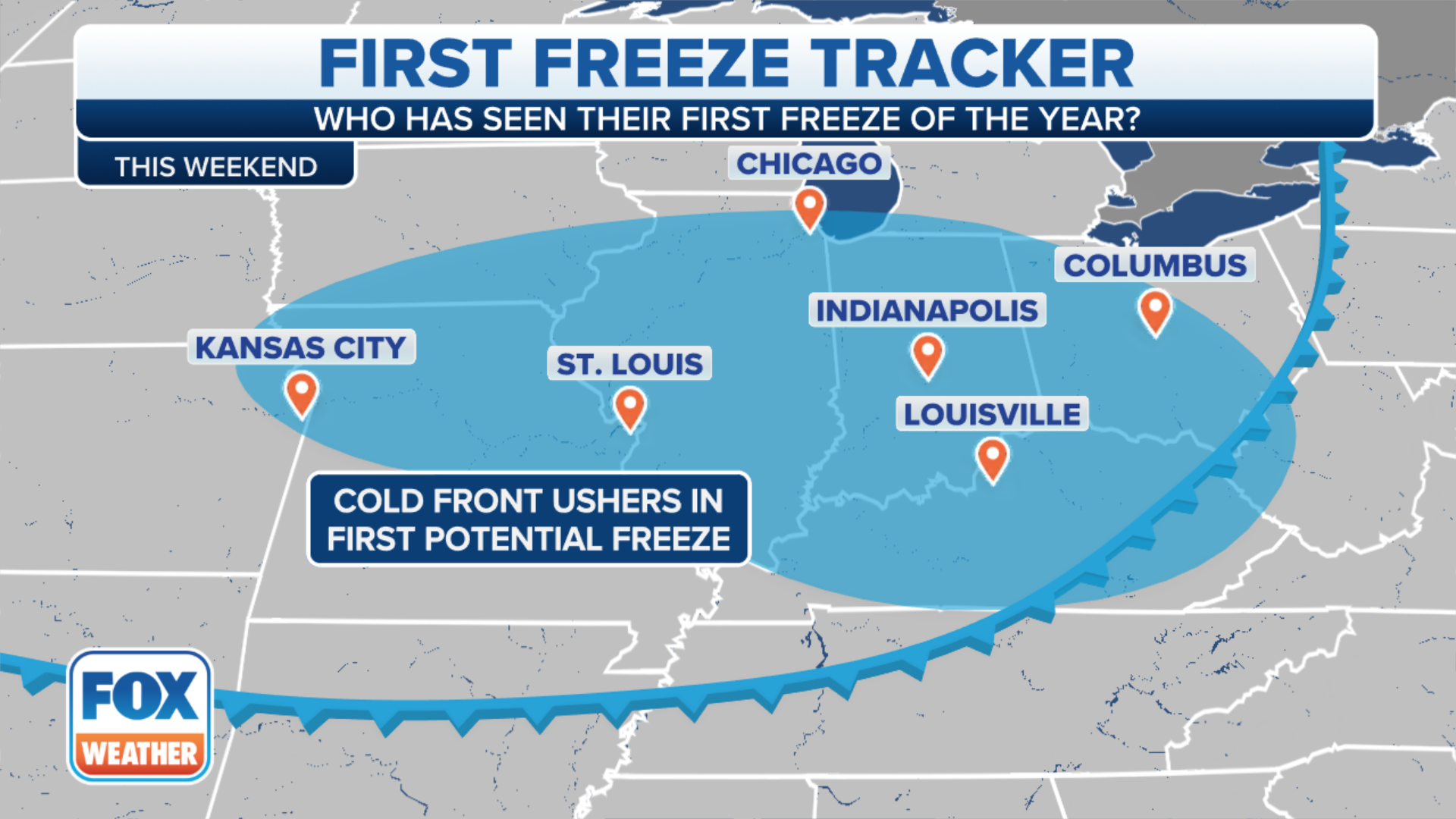 A cold front ushers in the first potential freeze this weekend from Kansas City, Missouri, to Columbus, Ohio.
(FOX Weather)

Some lake-effect snow showers are even possible Friday in the upper Great Lakes region, and while many people may be thinking it's still a little early for the risk of snow, it's not uncommon for that region to see its first snow in October.

In the Upper Peninsula of Michigan, the first snow showers of the 2022-23 season have been occurring at the National Weather Service office in Marquette since Thursday evening.

In the Upper Peninsula of Michigan, the first snow showers of the 2022-23 season have been occurring at the National Weather Service office in Marquette since Thursday evening.

In an average year, areas of the Midwest and Plains from Michigan and northern Ohio into the Dakotas, northern Kansas and the Texas and Oklahoma panhandles can see their first snow before the end of October.

It's a much different story in the West, where well-above-average temperatures are favored into the middle of October. In fact, earlier this week, Seattle experienced a three-day stretch with high temperatures of 75 degrees or warmer – a first for the month of October.

Up next: The Northeast

Below-average temperatures will extend from the Plains to western New York on Friday as highs struggle to get out of the 50s to near 60 degrees. 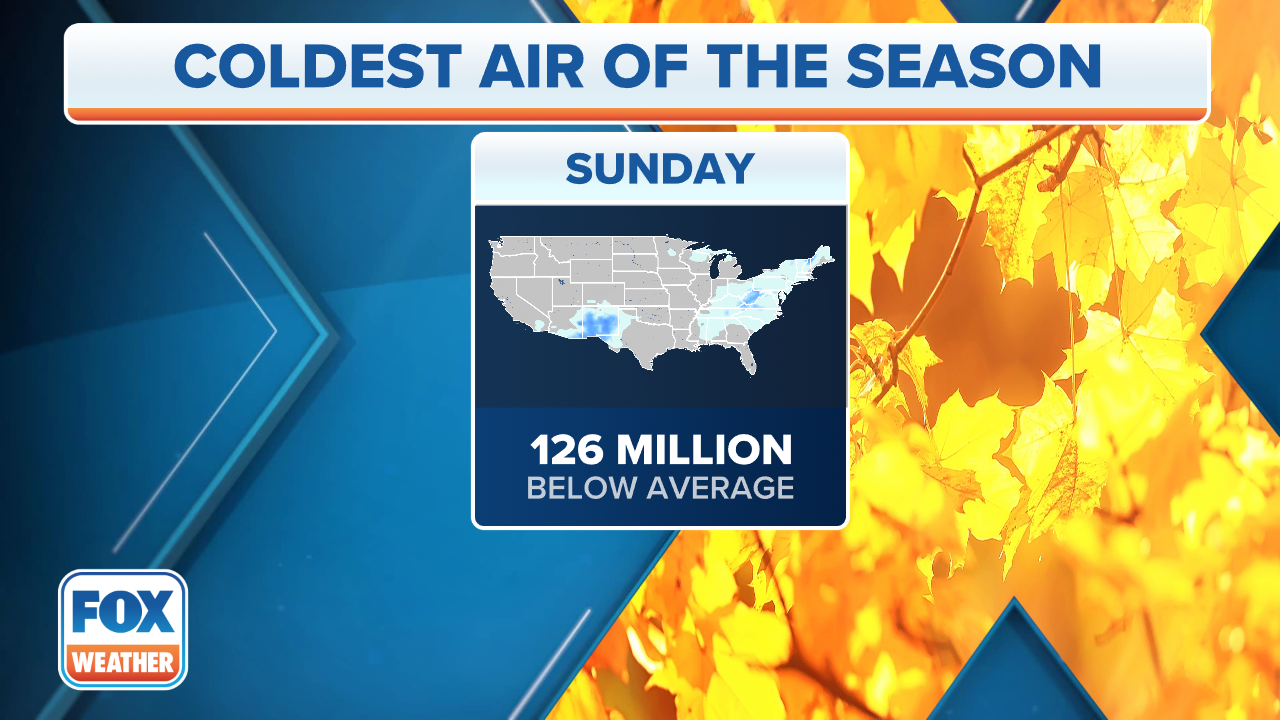 The coldest air of the season has moved into the Plains and Midwest and will reach the Northeast this weekend.
(FOX Weather)

While unlikely, it's not out of the question that the first 30s could appear Sunday morning as far east as the Interstate 95 corridor, but these temperatures are most likely across the Ohio Valley.

Highs will struggle to get out of the 50s this weekend in the Northeast, even with minimal clouds and plenty of sun, thanks to the influence of a strong high-pressure system that will build in behind the cold front. 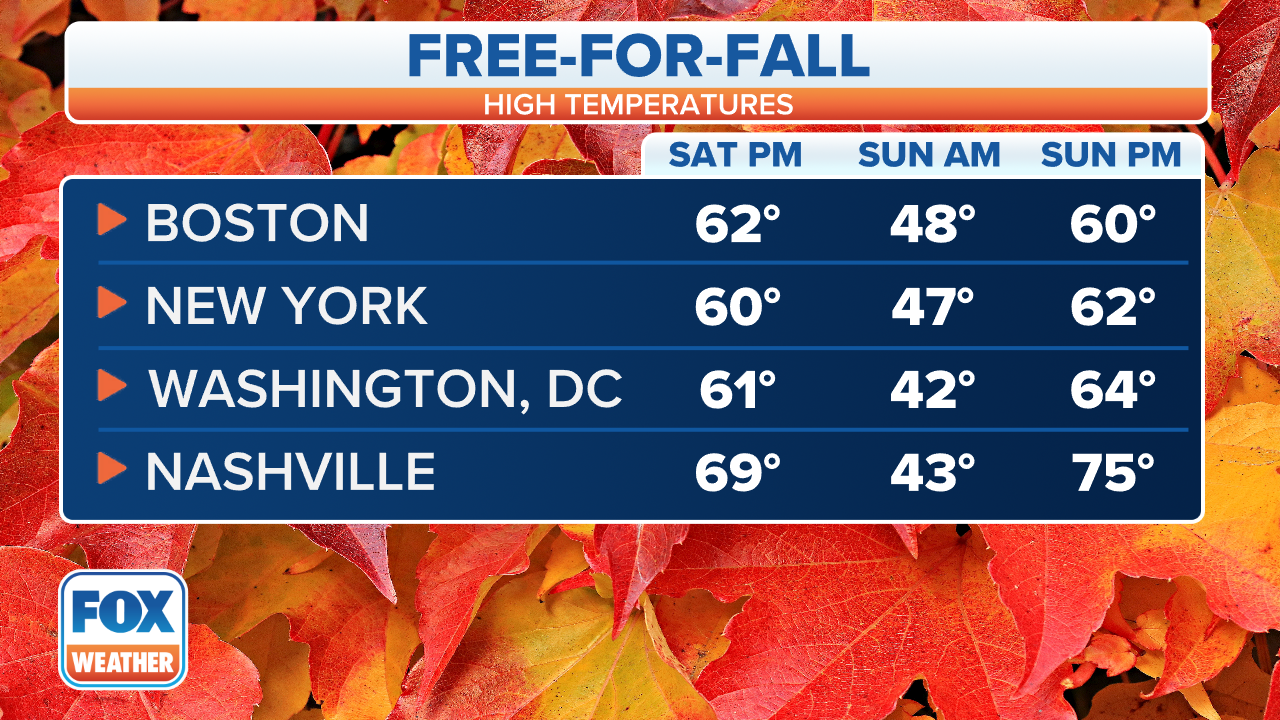 Temperatures in the eastern half of the country will tumble starting this weekend.
(FOX Weather)

These cooler temperatures will be so widespread that more than 175 million Americans, or roughly half of the country, are forecast to see below-average highs on Saturday.

Computer forecast models are indicating this cooler pattern will stick around into next week along the East Coast, and the FOX Forecast Center expects highs to remain below average, especially across the mid-Atlantic states.