By Friday or Saturday, it will be in the western Caribbean, where the water is very warm, and the atmospheric environment is forecast to be conducive for development and strengthening.

Tropical Depression Thirteen is expected to strengthen into a tropical storm on Friday and then a hurricane over the weekend as it tracks across the Caribbean Sea and takes aim at Central America, where it will pose a serious inland flood threat into early next week.

Once this system's winds reach at least 39 mph, it will be named Tropical Storm Julia, making it the 10th named tropical cyclone in the Atlantic Basin this season. It will then become a hurricane if its winds reach at least 74 mph, which the National Hurricane Center expects to happen by late Saturday or early Sunday.

This future hurricane is not expected to threaten the U.S. Gulf Coast because it will likely be ripped apart by the rugged terrain of Central America as it moves inland from Sunday into early next week.

The Atlantic hurricane season has just under two months remaining, so it's not unusual for the tropics to remain active in October. The month ranks as the third-most active (behind September and August) for tropical activity in the Atlantic Basin, typically producing about two named storms each year, one of which becomes a hurricane.

Where is Tropical Depression 13?

Tropical Depression Thirteen is centered about 30 miles west-southwest of the northern tip of Colombia's Guajira Peninsula or more than 600 miles east of Colombia's Isla de Providencia.

The tropical depression has maximum sustained winds of 35 mph and is moving westward at about 15 mph. 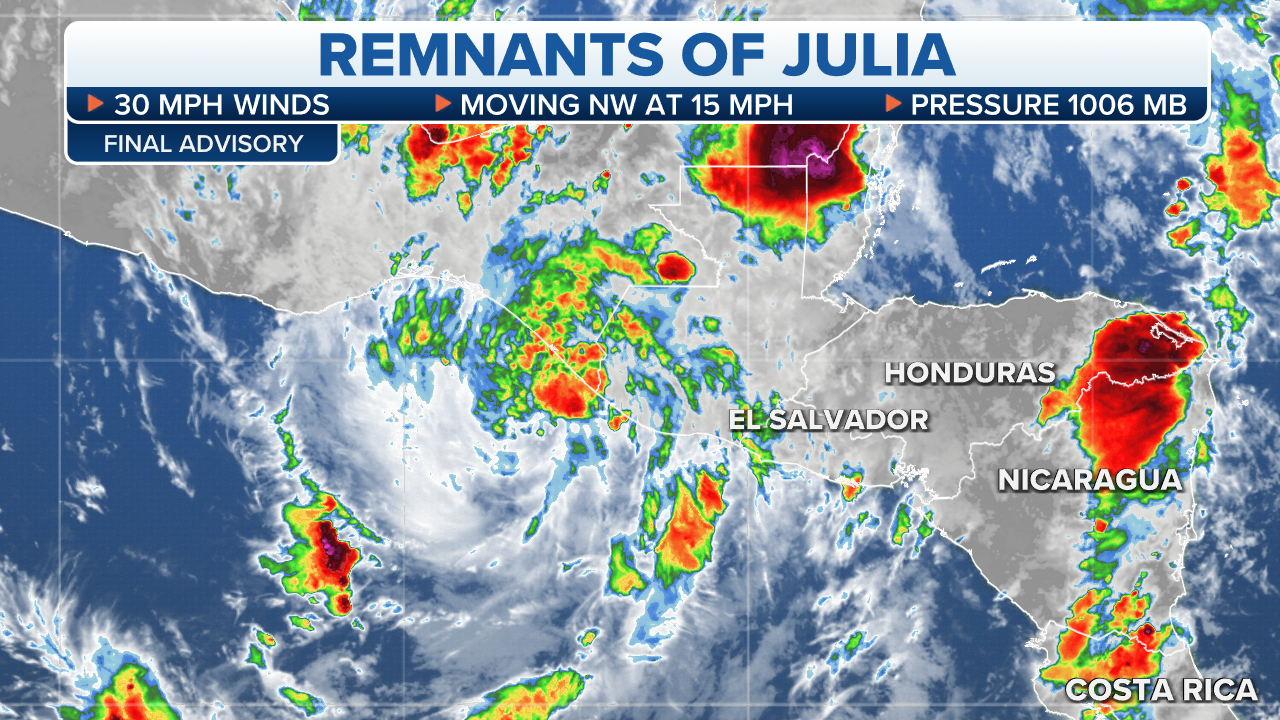 What is the forecast for Tropical Depression 13?

Tropical Depression Thirteen is forecast to strengthen into a tropical storm later Friday morning or Friday afternoon, then become a hurricane by late Saturday or early Sunday before it reaches the Colombian islands of San Andrés and Isla de Providencia, as well as the coast of Nicaragua on mainland Central America. This system will be called "Julia" once the National Hurricane Center officially declares it a tropical storm.

A tropical storm is a tropical cyclone with maximum sustained winds between 39 and 73 mph. The National Hurricane Center assigns names to tropical storms using the official name list for that season developed by the World Meteorological Organization.

According to the FOX Forecast Center, the tropical depression is expected to move away from Colombia's Guajira Peninsula on Friday morning, then move across the southwestern Caribbean Sea through Saturday.

Tropical Depression Thirteen is then predicted to pass near the Colombian islands of San Andrés and Isla de Providencia on Saturday night before approaching the coast of Nicaragua on mainland Central America on Sunday morning.

TROPICAL DEPRESSION VS. TROPICAL STORM VS. HURRICANE: WHAT’S THE DIFFERENCE? 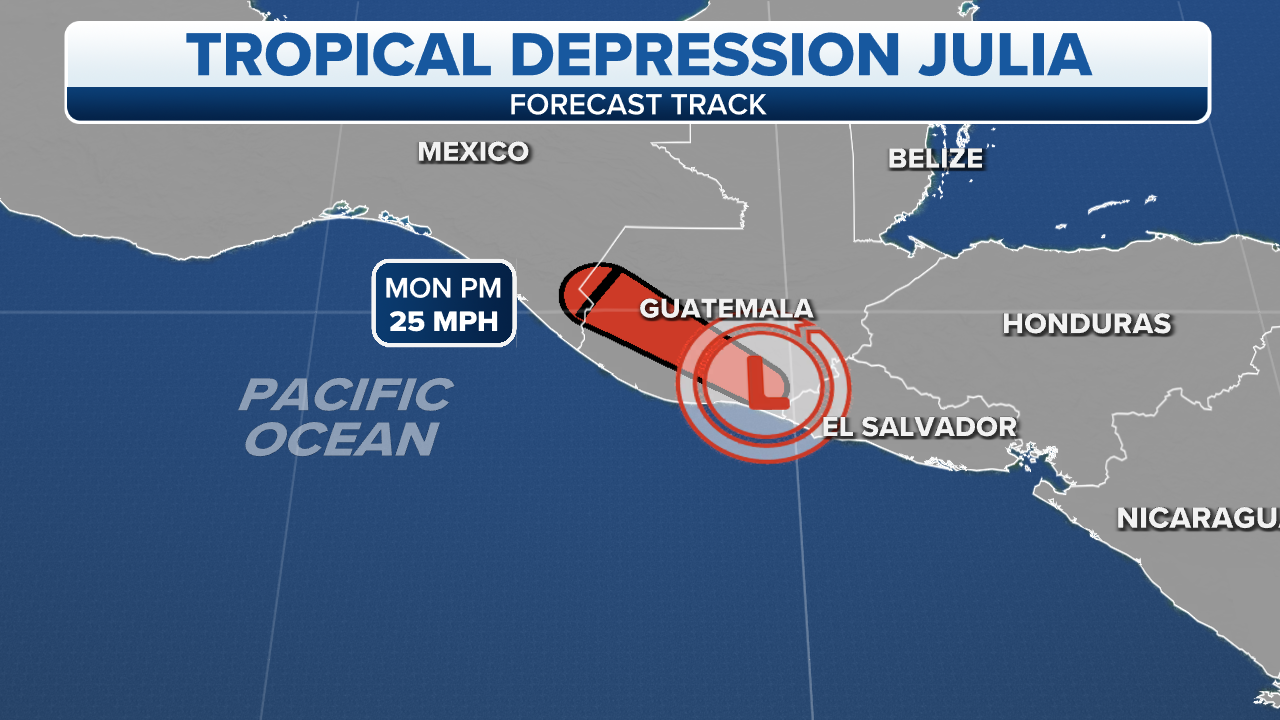 "You'll notice that the cone is fairly skinny, and that is showing less uncertainty to the forecast in comparison to what we saw with Hurricane Ian," FOX Weather meteorologist Britta Merwin said. "The dynamics in the atmosphere are pretty much locked in stone, and so we're not going to see a huge variability with the forecast itself."

Hurricane Watches have been issued for the Colombian islands of San Andrés, Isla de Providencia and Santa Catalina.

A Hurricane Watch means hurricane-force winds (74-plus mph) are possible in the watch area. A watch is typically issued 48 hours before the anticipated first occurrence of tropical-storm-force winds (39-plus mph), conditions that make outside preparations difficult or dangerous. 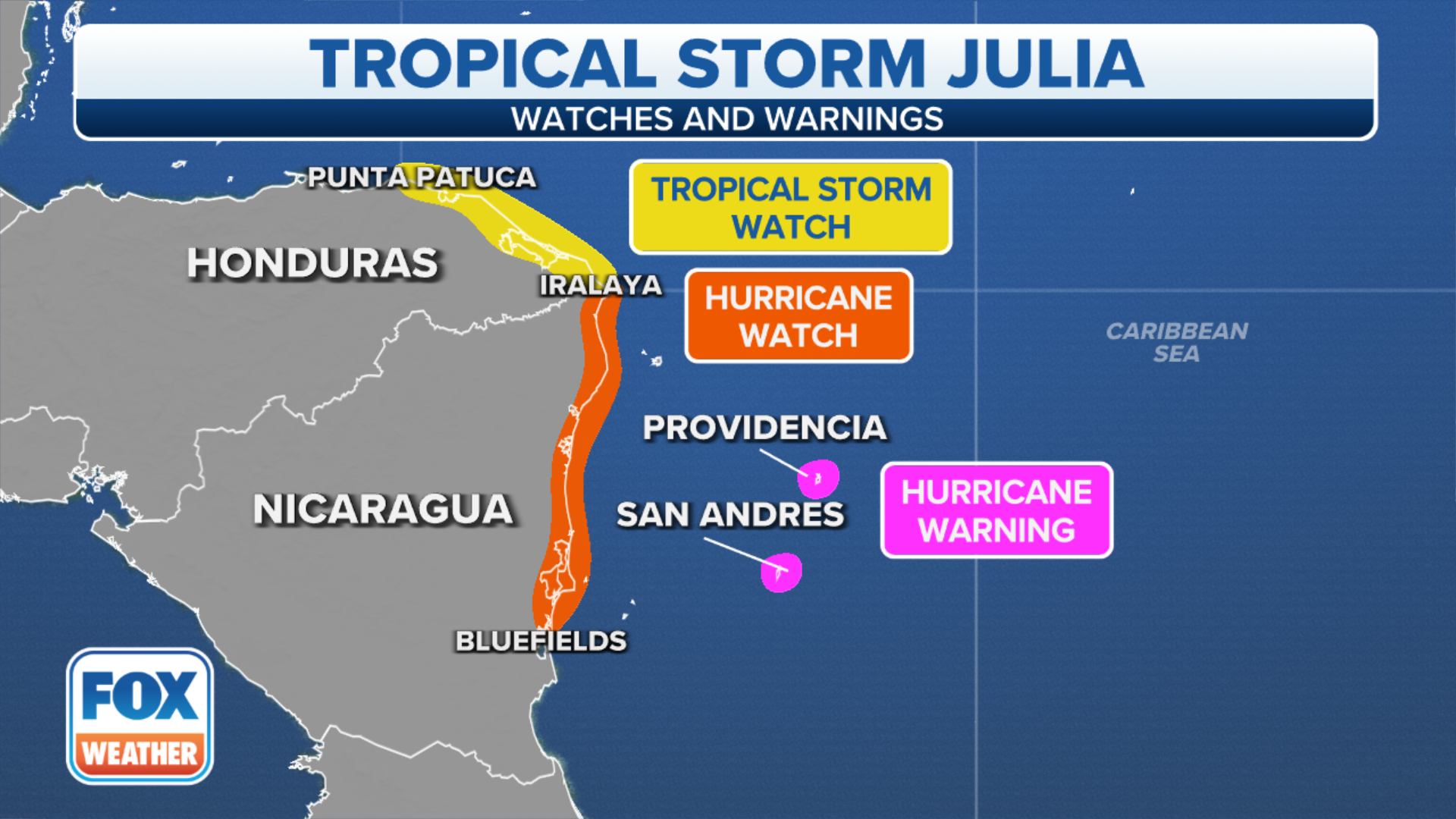 Tropical Storm Warnings have been issued along the coast of mainland Colombia from Riohacha eastward to the Colombia/Venezuela border in northern South America.

A Tropical Storm Warning means tropical-storm-force winds (39-plus mph) are expected somewhere in the warning area – in this case, within the next 6 to 12 hours. 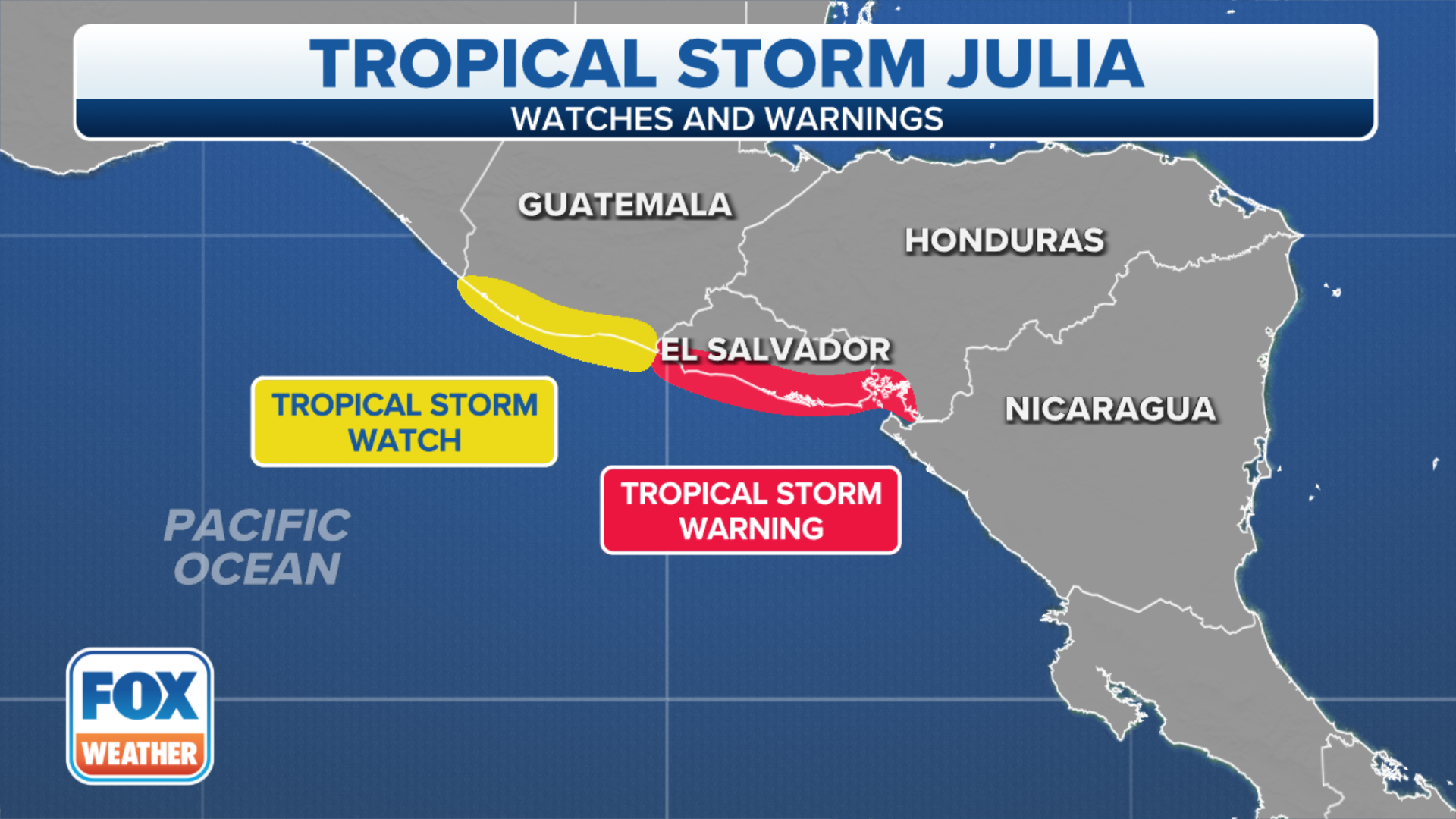 Interests along the coasts of Nicaragua and Honduras on mainland Central America should monitor the progress of Tropical Depression Thirteen. Additional watches or warnings will likely be issued for those areas later Friday.

What are the impacts of Tropical Depression 13?

Tropical Depression Thirteen is expected to bring tropical-storm-force winds (39-plus mph) to the coast of Colombia within the Tropical Storm Warning area in northern South America on Friday morning. Gusts to tropical-storm force are also possible across portions of the northwestern coast of Venezuela over the next several hours.

Hurricane-force winds (74-plus mph) are possible on the Colombian islands of San Andrés, Isla de Providencia and Santa Catalina from Saturday night into early Sunday, with tropical-storm-force winds (39-plus mph) possibly beginning as soon as Saturday afternoon.

Additionally, between 6 and 12 inches of rain is likely on the Colombian islands of San Andrés and Isla de Providencia, with 5 to 10 inches expected across portions of mainland Central America. Isolated amounts as high as 15 inches are possible, particularly in Central America.

On Colombia's Guajira Peninsula, between 3 and 6 inches of rain is predicted, with localized totals up to 10 inches possible.

An additional 1 to 3 inches of rain is forecast for northern Venezuela and the so-called ABC island chain of Aruba, Bonaire, and Curaçao.

The FOX Forecast Center says this rainfall could cause life-threatening flash floods. There is also the potential for life-threatening mudslides across portions of Central America this weekend. 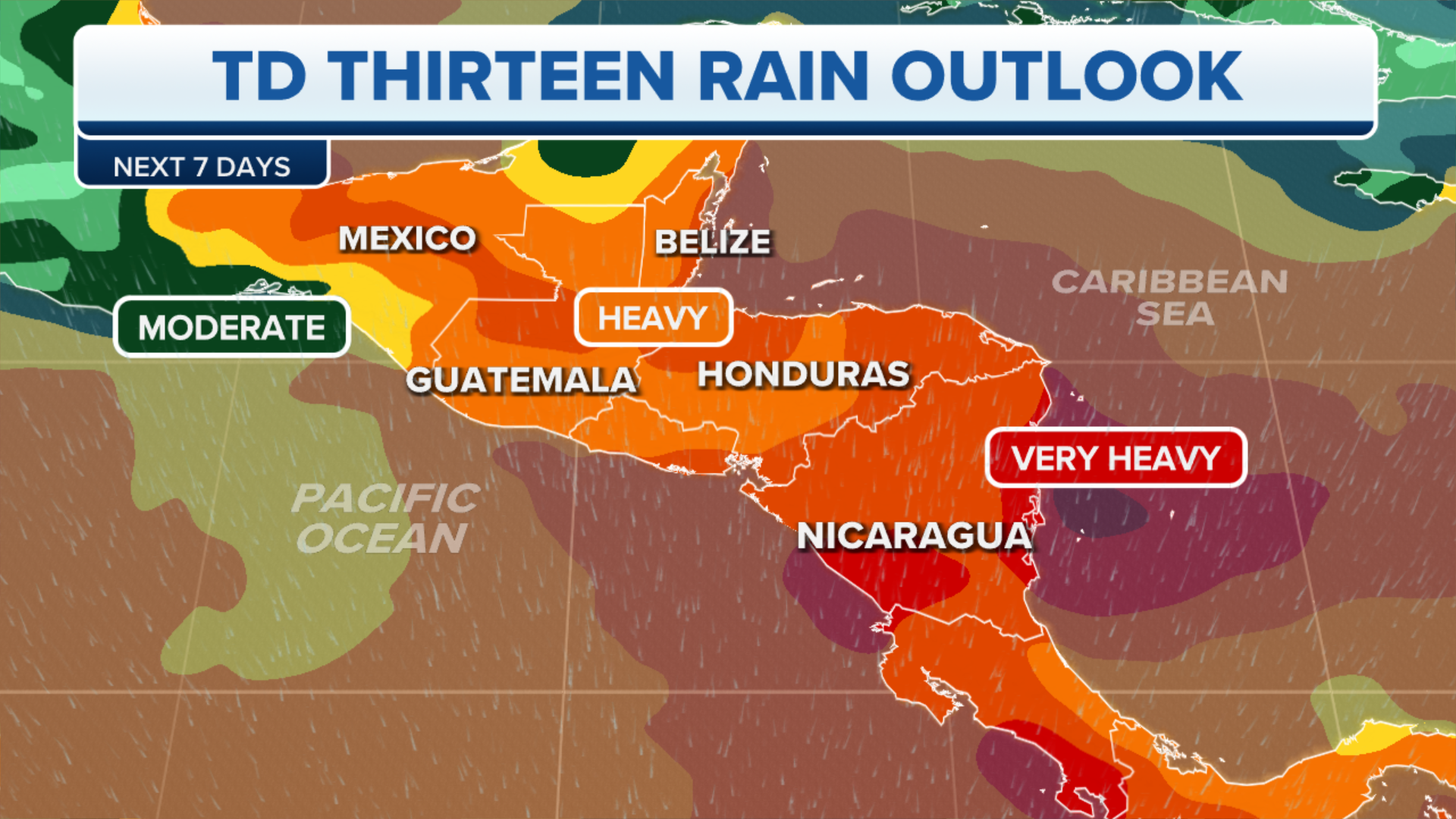 Will Tropical Depression 13 threaten the US?

A blocking high-pressure system is forecast to remain in place north of Tropical Depression Thirteen as it tracks across the Caribbean.

Therefore, the FOX Forecast Center believes the system will keep heading west across the southwestern Caribbean Sea rather than turn north toward the U.S., sending it on a path through Central America late this weekend and into early next week.

The computer forecast model tracks for Tropical Depression Thirteen are shown on the map below. 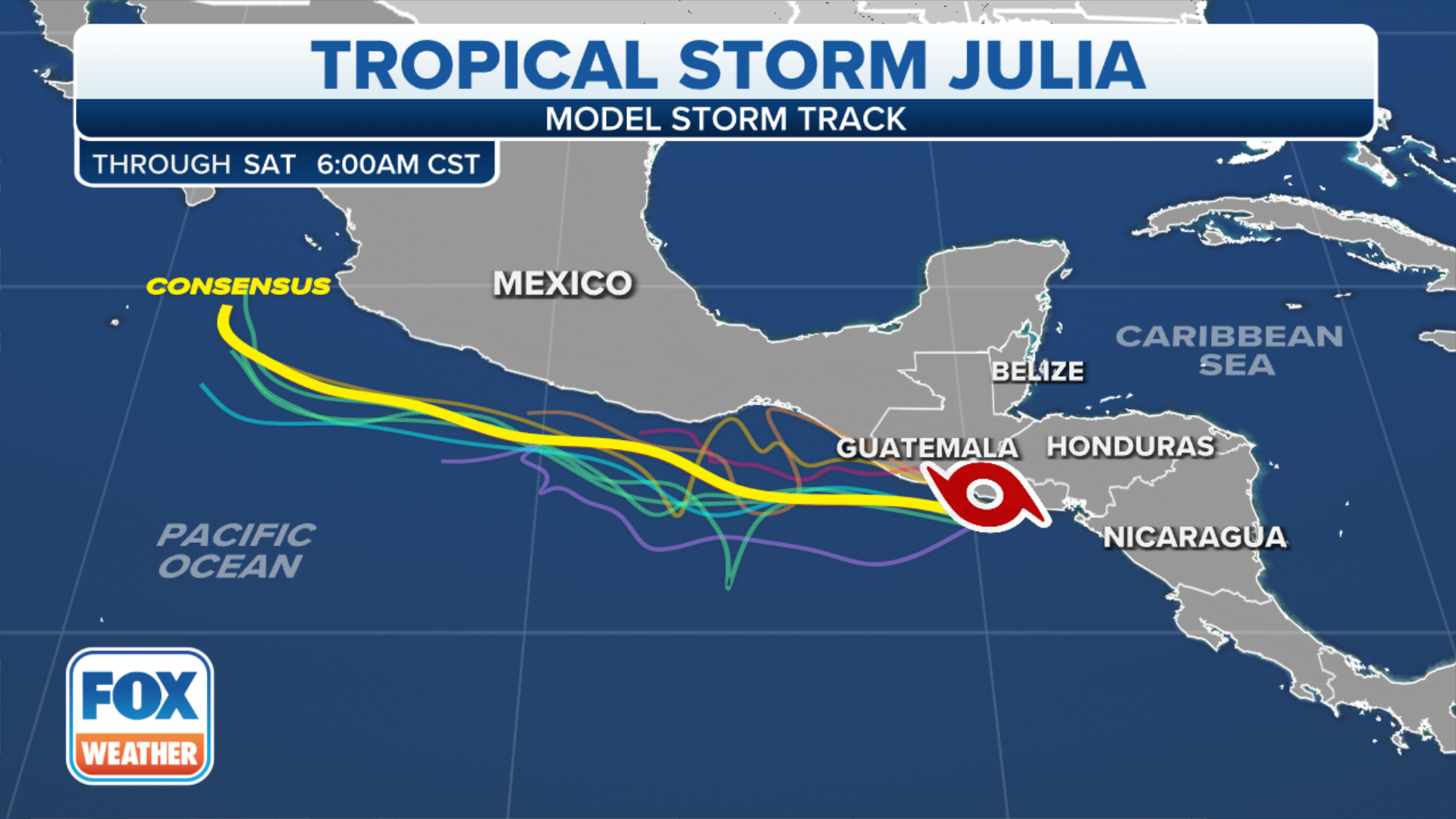