Winter Storm Warnings have been issued for Minneapolis/St. Paul, where 5 to 8 inches of snow is expected to pile up across the Twin Cities metro area on Tuesday.

MINNEAPOLIS – A winter storm brought several inches of snow to parts of the Upper Midwest on Tuesday, ranking as the snowiest event around the Minneapolis-St. Paul metro area so far this season.

Snow began to break out Monday night across western Nebraska and South Dakota as an area of low pressure moved off the Rockies, according to the FOX Forecast Center.

The low-pressure system has been strengthening, and that will allow for the snow to increase in coverage and intensity from Colorado to Minnesota, Wisconsin and parts of Michigan's Upper Peninsula.

And because of the accumulating snowfall, the National Weather Service has issued Winter Storm Warnings and Winter Weather Advisories for part of the central Plains and Upper Midwest. 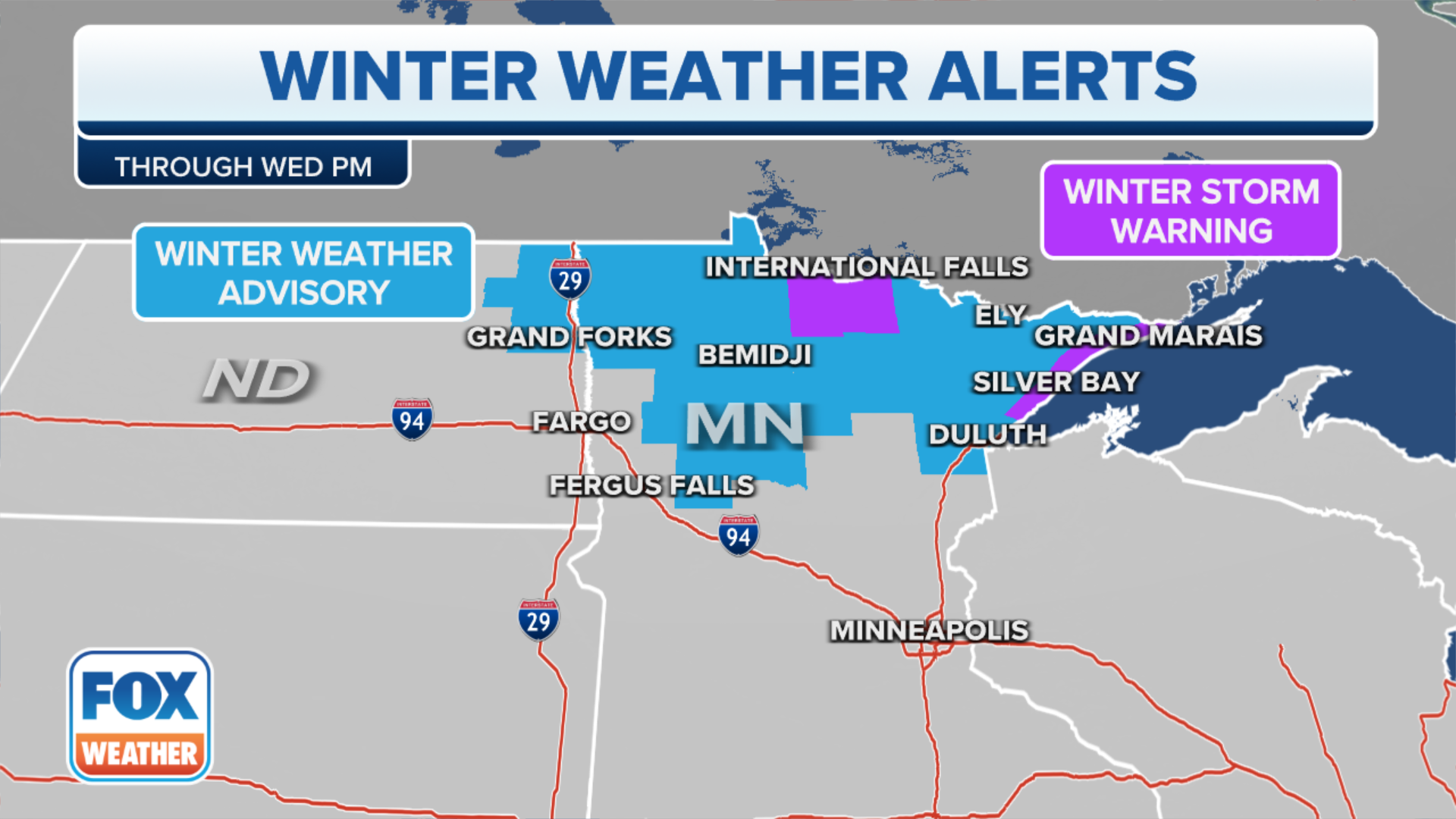 The Winter Storm Warnings were in effect for parts of southern and eastern Minnesota, including the Twin Cities of Minneapolis and St. Paul. The warnings extend into parts of northwestern Wisconsin and the western Upper Peninsula of Michigan.

These winter weather alerts are valid through Tuesday night or Wednesday morning depending on the location.

"This is not going to be a historic part of the storm by any means," FOX Weather meteorologist Britta Merwin said. "But this is enough snow that it's going to impact travel."

Minneapolis' airport reported 8.4 inches of snow by Tuesday night, nearly doubling the highest daily snowfall of the season so far. Most areas around the Minneapolis metro area had around 5-7 inches of snow, according to FOX 9 Minneapolis-St. Paul

The Minnesota State Patrol has already reported several crashes on roads in the Minneapolis metro area. At least two crashes were reported on I-694 and another was reported on I-494.

If you need to travel when the snow is falling, it's a good idea to ensure you have essential items in your car in case you get stuck on the road.

Items such as a cell phone charger, jumper cables, an ice scraper and a flashlight could be helpful if you get stranded.

HOW TO SAFELY DRIVE ON THE ICE AND SNOW 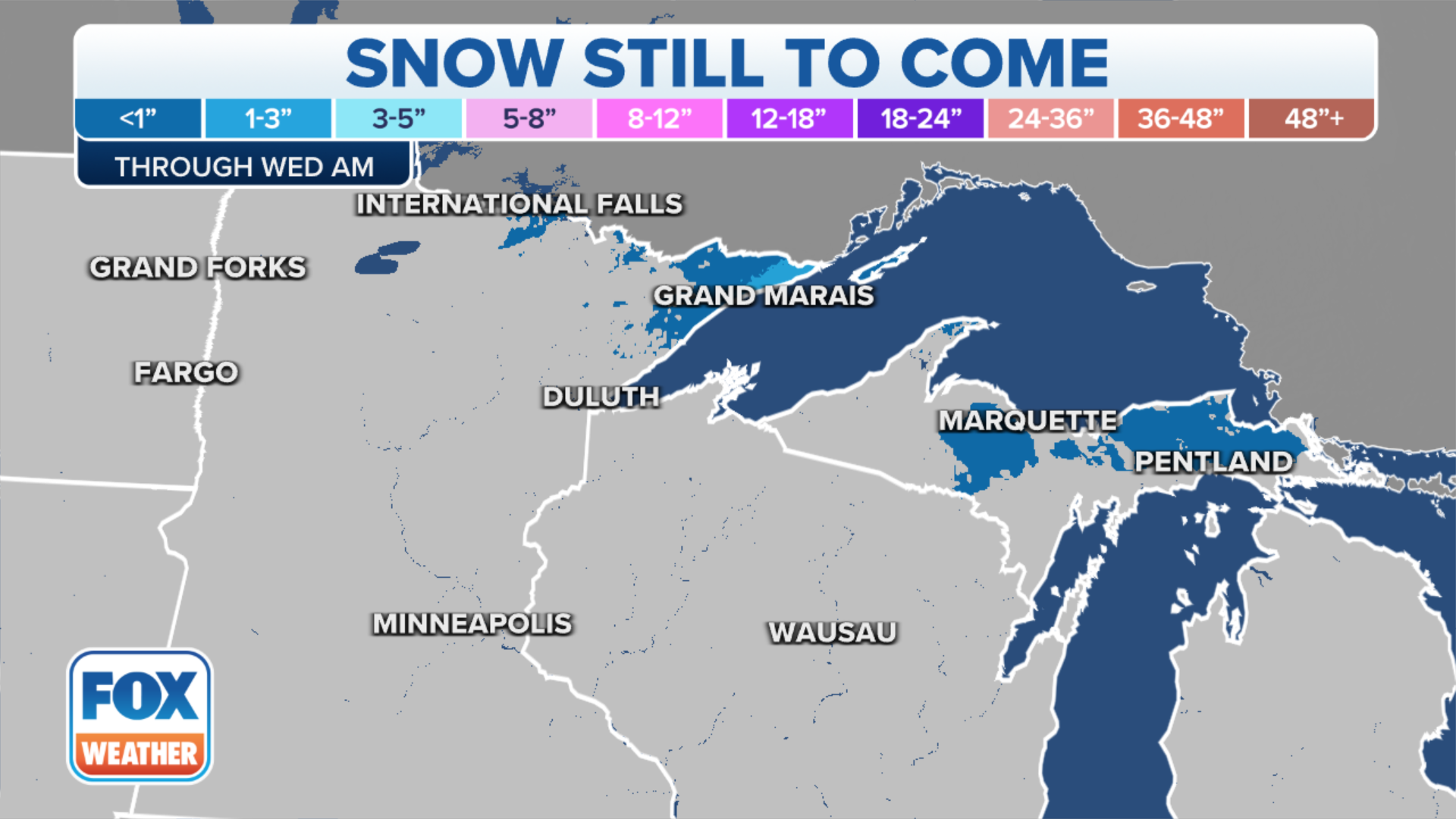 Merwin said the bulk of the snow will fall throughout the day on Tuesday, and it should begin to clear out as we head into Tuesday night.

"So, at least this is a quick-hitter," Merwin said. "But look at the snow totals for Minnesota. It's a good 5 to 8 inches of snow for you guys, with the possibility of maybe 8 to 12 inches of snow closer to Duluth."

Closer to Interstate 80 along Nebraska, snow totals are expected to be much lighter, with about 1 to 3 inches expected.

"But you're going to have a wind component there," Merwin said. "So, just take it a little slow on the interstates." 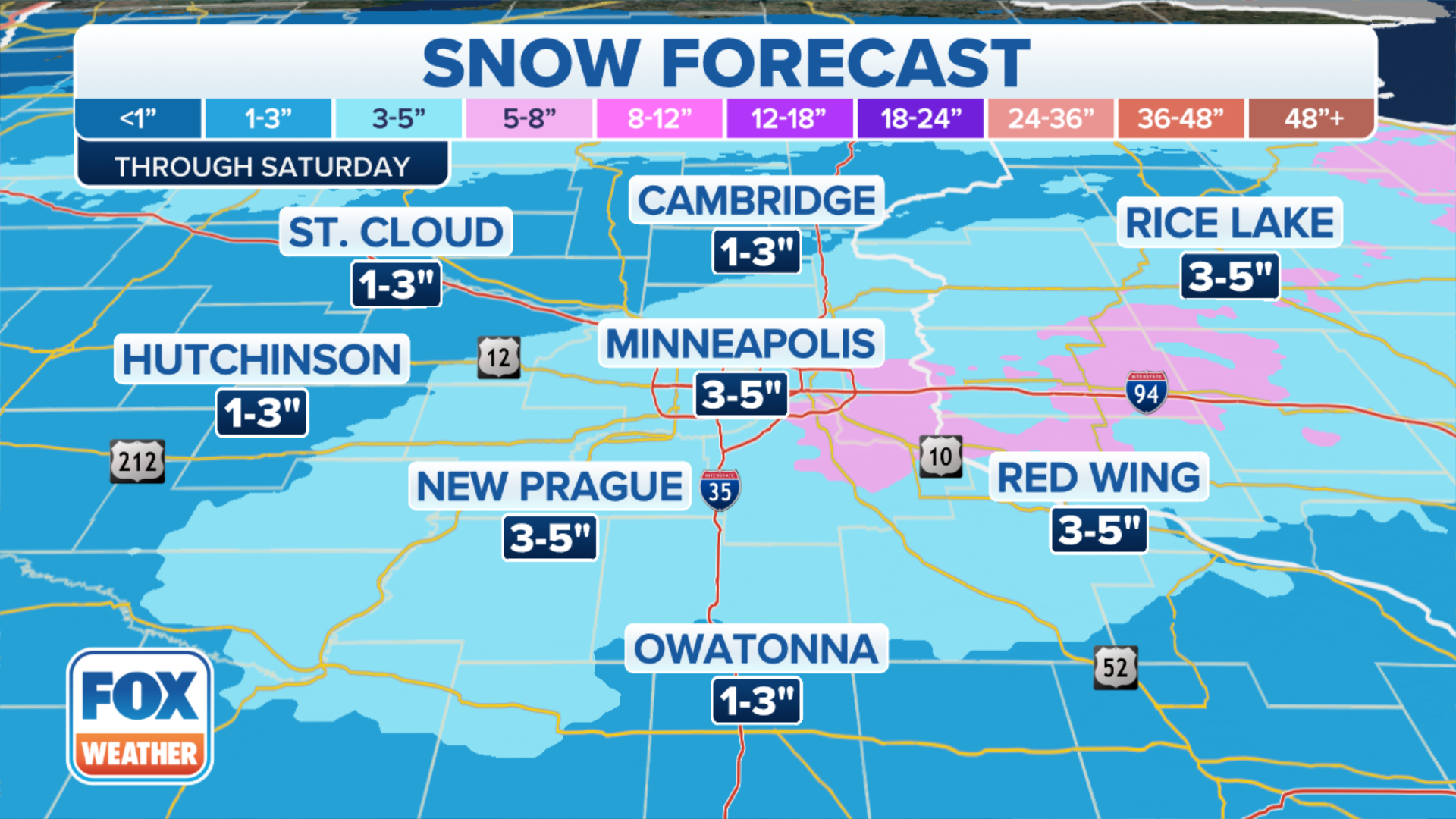 The snow will wind down on Wednesday as the low pressure moves north into Canada, but temperatures will drop in the wake of the storm. Highs around the Twin Cities will only be in the lower 20s, with lows in the teens.