60Posts
Back to Top

Several tornado and severe thunderstorms have been issued.

A Tornado Warning has been issued for Washington, D.C., and nearby counties because of a storm that is capable of producing a tornado. The storm is moving eastward and is expected to impact areas in Maryland before heading over the bay.

A Tornado Warning has been issued for some of the suburbs outside of Washington, D.C.

Line of severe thunderstorms over Pennsylvania

A line of severe thunderstorms has formed and continues to march eastward across Pennsylvania. Severe Thunderstorm Warnings have been issued from Maryland through northeast Pennsylvania, ahead of the storms.

Heavy rainfall, cloud-to-ground lightning and damaging winds will be possible as the line marches towards some of the big cities of the Northeast.

National Weather Service meteorologists have confirmed 14 tornadoes struck the South and the Plains over the last couple of days. As the NWS surveys damaged areas, that number will likely grow.

How meteorologists determine if a tornado is to blame for damage: Read more

The same storm system producing severe weather along the East Coast is expected to stall over Florida and provide plenty of chances for rain over the next couple of days. The wet weather could interfere with SpaceX's planned launch of satellites into space on Friday.

A Tornado Warning has been issued for Carbondale, Archbald and Blakely Pennsylvania until 6:15 p.m. EDT. The thunderstorm with the rotation is north of Scranton, PA and is moving off to the east.

Tornado-warned storm along I-95 in North Carolina

A Tornado Warning has been issued for Nash and Halifax counties in North Carolina.

Clean-up efforts are underway in Arkansas after an EF-3 tornado moved through on Wednesday morning: Click Here

The Storm Prediction Center has issued a Severe Thunderstorm Watch for areas from Maryland to New York effective until midnight.

The primary threats from the storms are damaging wind gusts and heavy rainfall.

Meteorologists expect thunderstorms to move out of Pennsylvania during the evening hours.

Severe storms are pushing into the Northeast.

Thousands of customers are without power across the mid-Atlantic on Thursday as powerful storms move across the region.

According to Poweroutage.us, more than 21,000 power outages have been reported in Virginia and more than 11,000 outages were reported in Maryland as of Thursday afternoon.

Radar indicates the rotation in the storm cell outside of Raleigh, North Carolina is near the city's international airport. The storm is expected to continue to move to the northeast and move away from the area.

Parts of Raleigh metro under a Tornado Warning

A Tornado Warning has been issued for a storm moving just north of downtown Raleigh, North Carolina.

More than 2,600 flights delayed on Thursday

A powerful line of storms is traversing the state of Pennsylvania on Thursday, prompting multiple reports of severe weather.

Those storms have resulted in an increase in power outages across the Keystone State. According to PowerOutage.us, about 11,000 customers are without power as of Thursday afternoon.

Severe thunderstorms are impacting parts of the mid-Atlantic and the I-95 corridor right now. The FOX Weather 3D Radar is tracking the storms move from west to east across the area. The storms have triggered several Severe Thunderstorm Warnings and a Tornado Warning.

Tornado Warning issued for counties in West Virginia and Maryland

A line of severe storms tracking through Pennsylvania is prompting multiple warnings as it traverses the state.

Severe Thunderstorm Warnings are in effect for both the Lockhaven and Bedford areas. People in those areas should expect heavy rain and damaging winds with these storms.

Stay indoors and away from windows until the storms pass.

Tornado sirens in Tuckahoe, Virginia, were sounded Thursday afternoon as powerful storms moved through the area.

The National Weather Service issued a Tornado Warning that included Tuckahoe about 2:25 p.m., but there have been no reports of any damage in the area.

A Tornado Warning has been issued until 3 p.m. Eastern for Queen, Richmond, Caroline, Westmoreland, King William and Essex counties. People living inside the warning box should seek shelter immediately.

A new Tornado Watch has been issued for parts of the mid-Atlantic until 8 p.m. Eastern. This is in addition to an earlier Tornado Watch that was issued across the eastern Carolinas.

According to the Storm Prediction Center, some damaging winds are also possible with storms that develop inside the watch area.

A Tornado Watch also remains in effect until 4 p.m. Eastern for parts of Florida and Georgia.

A new Tornado Warning has been issued for the Richmond, Virginia, area. This time, the warning covers the western side of the metro area. People inside the warning area should seek shelter immediately.

A severe thunderstorm watch has been issued until 10 p.m. Eastern for parts of five states from the mid-Atlantic to the Northeast.

According to the Storm Prediction Center, widespread damaging winds are likely with storms inside the watch area. Isolated tornadoes and hail are also possible.

More than 500K Americans under a Tornado Warning in Virginia

The Tornado Warning is in effect until 2:15 p.m. for Richmond, Brandermill, Rockwood, Midlothian, Bon Air, Tuckahoe, Laurel and Mechanicsville, Virginia. EXTREME WEATHER
Tornadoes hit large cities: This is why
It’s a common myth that tornadoes don’t hit large cities, but we’re here to debunk this misconception because it’s simply not true.
Posted by Steven Yablonski Share

The city of Richmond. Virginia, is under a Tornado Warning until 2:15 p.m.

The Tornado Warning is in effect until 1:45 p.m. Eastern.

The Tornado Warning is in effect until 1:45 p.m.

The Tornado Warning is in effect until 1:45 p.m. Eastern.

Tornado Watches are in effect for parts of the Southeast.

The risk of severe weather is increasing in parts of the mid-Atlantic and Northeast. Severe storms are now very likely in portions of central and eastern Pennsylvania, Maryland and northern Virginia.

Damaging wind gusts and a few tornadoes are the main threats in this region Thursday afternoon and evening.

The Tornado Warning is in effect until 1:15 p.m. Eastern 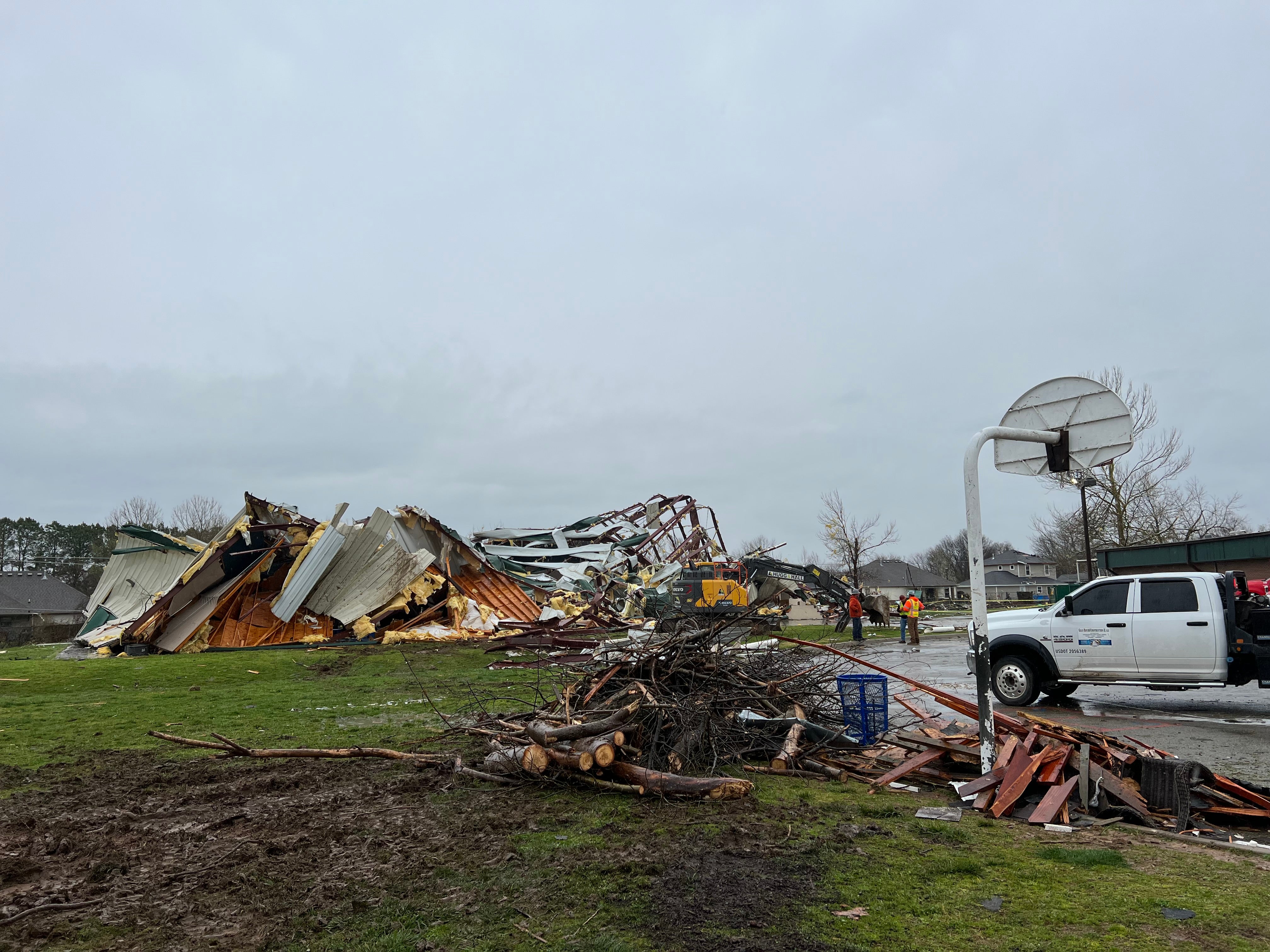 EXTREME WEATHER
School bells still ring in Arkansas after tornado destroys part of elementary building
Grit, compassion and character were all one Northwest Arkansas community needed to get their tornado-ravaged school doors back open less than a day after the storm's passing.

An EF-3 tornado touched down shortly after 4 a.m. Central on Wednesday in the southern and the eastern portions of Springdale, causing significant damage

The Tornado Warning is in effect until 12:15 p.m. Eastern

"At 1139 AM EDT, a severe thunderstorm capable of producing a tornado was located over Ford City, or near Kittanning, moving northeast at 60 mph," the NWS wrote in the warning.

This dangerous storm will be near New Bethlehem, Pennsylvania, around 11:55 a.m. Eastern.

Two people have died, and two others were injured after a likely tornado hit the Florida panhandle early Thursday morning.

Washington County first responders are on the scene of what the sheriff's office said was a tornado that touched down in Chipley near Gilbert’s Mill Road and surrounding areas.

Chipley is located about 30 miles north of Panama City. 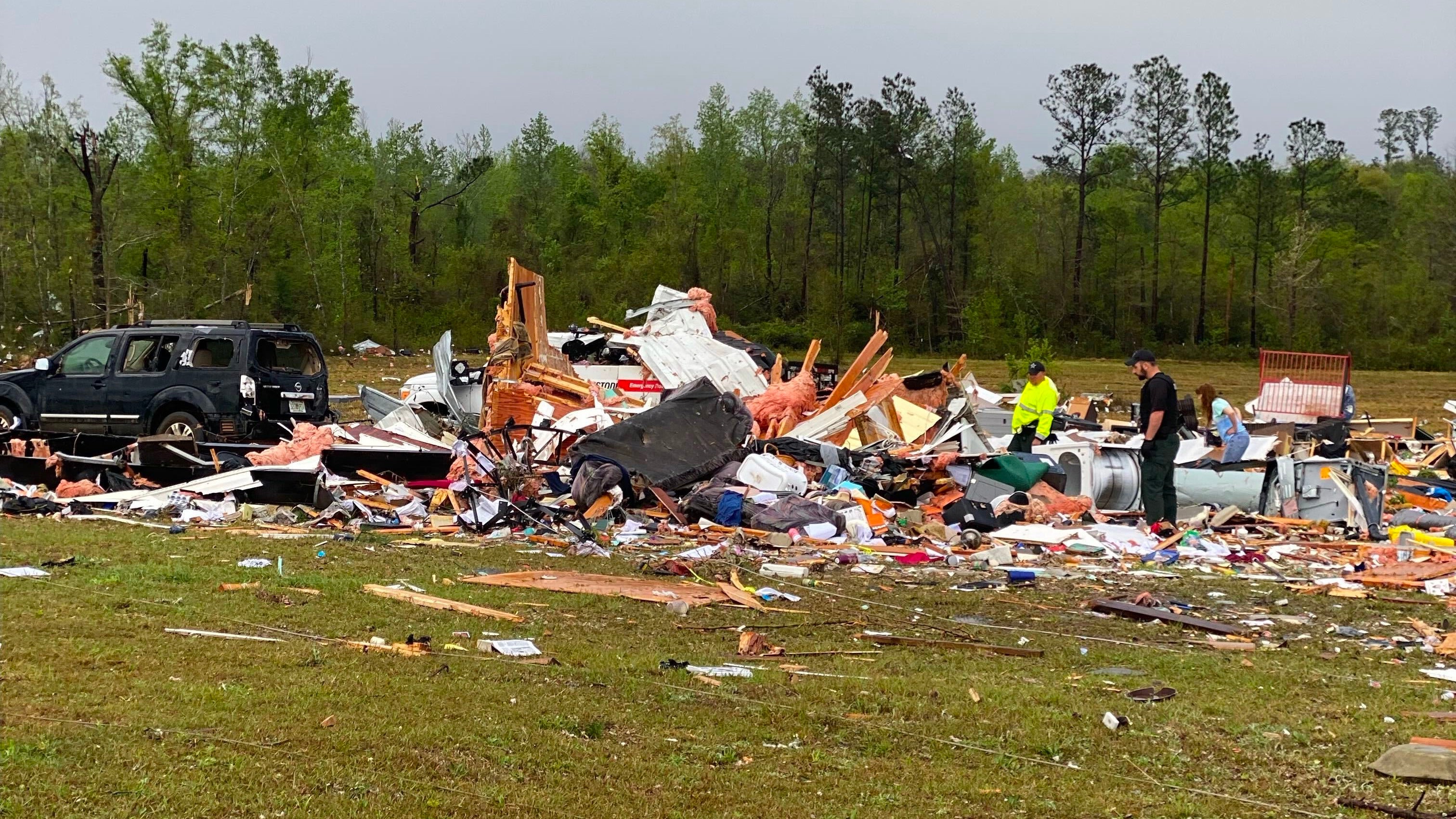 The National Weather Service will investigate storm damage in Louisiana and Mississippi on Thursday to investigate whether tornadoes touched down.

More information will be released in the coming days.

Crews will investigate damage to determine whether a tornado touched down on Wednesday night.

The sheriff's office in Washington County, Florida, says homes have been destroyed and power lines have been brought down after a possible tornado earlier this morning.

At least 7 people were injured when an EF-3 tornado tore through the community of Springdale early Wednesday morning.

A Tornado Watch is in effect until 2 p.m. Eastern time.

This watch area includes Albany and Valdosta in Georgia and Apalachicola and Tallahassee in Florida.

What is a waterspout?

While many believe a waterspout is simply a tornado over water, this is only partially true. Depending on their formation, NOAA says waterspouts come in a couple of different types: tornadic and fair weather. 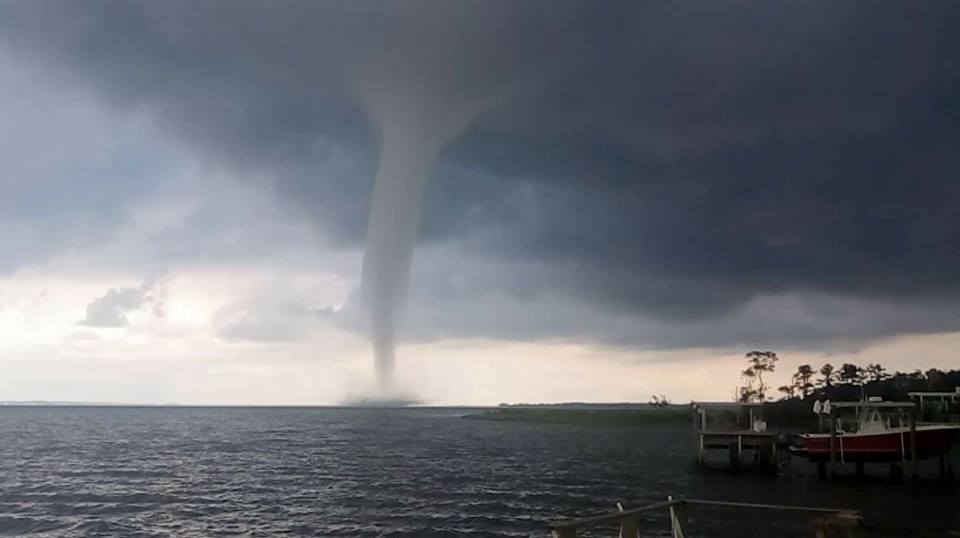 LEARN
What is a waterspout?
While many believe a waterspout is simply a tornado over water, this is only partially true.
Posted by Chris Oberholtz Share

What is a squall line and why is this type of severe weather so dangerous? LEARN
What is a squall line and why is this type of severe weather so dangerous?
When severe weather is threatening your area, FOX Weather meteorologists might mention the term "squall line" to describe the storms barreling in your direction.

As the term suggests, squall lines are thunderstorms organized in a line, typically arranged from north to south.

According to the National Weather Service, these dangerous lines of storms can stretch for hundreds of miles and persist for many hours, producing destructive winds, hail and even tornadoes along their path.

The National Weather Service in Tallahassee has issued a Tornado Warning for northwestern Gulf, southeastern Bay and southwestern Calhoun counties in the panhandle of Florida until 6:30 a.m. Central.

Many people are waking up Thursday morning without power as a strong line of storms makes its way across the eastern half of the U.S. More power outages are expected today. Winds could gust up to 60 mph.

Following another outbreak of severe thunderstorms with widespread damaging winds and tornadoes across the storm-ravaged South, the severe weather threat now shifts to the East Coast on Thursday.

There are reports in Jackson County, Florida, that homes have been damaged after a confirmed tornado in the area, according to the Florida Division of Emergency Management.

For more information about the storms sweeping across the South, click here.

Tornado Warning issued for Panama City, Florida, until 5 AM Central

The National Weather Service has issued a Tornado Warning valid until 5 a.m. Central time for central Bay County in the Florida Panhandle.

"At 436 AM CDT, a severe thunderstorm capable of producing a tornado was located near Panama City Beach, moving east at 45 mph," the NWS wrote in the warning.

This dangerous storm will be near Panama City, Lynn Haven, Callaway, Springfield and Hiland Park in Florida around 4:50 a.m. Central.

Tornado Warning issued in Florida Panhandle until 5 AM Central

The National Weather Service has issued a Tornado Warning valid until 5 a.m. Central time for northeastern Jackson County in the Florida Panhandle.

"At 433 AM CDT, a confirmed tornado was located near Marianna, moving northeast at 45 mph," the NWS wrote in the warning.

Tornado Warning issued in Florida Panhandle until 4:30 AM Central

The National Weather Service has issued a Tornado Warning valid until 4:30 a.m. Central time for southwestern Jackson County in the Florida Panhandle.

"At 418 AM CDT, a confirmed tornado was located 9 miles southeast of Chipley, moving northeast at 40 mph," the NWS wrote in the warning.

Locations impacted include Alford, Kynesville and Steele City in Florida.

Severe storms with damaging winds, a couple of tornadoes possible along East Coast

As this storm system continues to march eastward Thursday, additional severe thunderstorms will be possible from northern Florida all the way up to New York's Hudson Valley.

Damaging wind gusts will be the main concern with these storms, but a couple of tornadoes can't be ruled out. The Southeast has the greatest threat of a tornado or two.

Tornado Watch in effect until 8 AM Eastern

A Tornado Watch is in effect until 8 a.m. Eastern time (7 a.m. Central time).