Tropical Storm Celia expected to head further into the Eastern Pacific in the coming week. Wind gusts may reach 65 miles per hour by Wednesday.

It’s the tale of two different basins in terms of how busy the tropics are. Meteorologists are watching two tropical cyclones in the Eastern Pacific while the Atlantic remains quiet.

What was Hurricane Blas is a hurricane no more – downgraded to a tropical storm late Friday evening as peak winds dropped to 50 mph. It is 315 miles off the southern tip of Baha California. Tropical Depression Celia is nearly 100 miles south of the coast of El Salvador.

While Blas only remains a threat to marine interests while Cecilia continues to weaken. 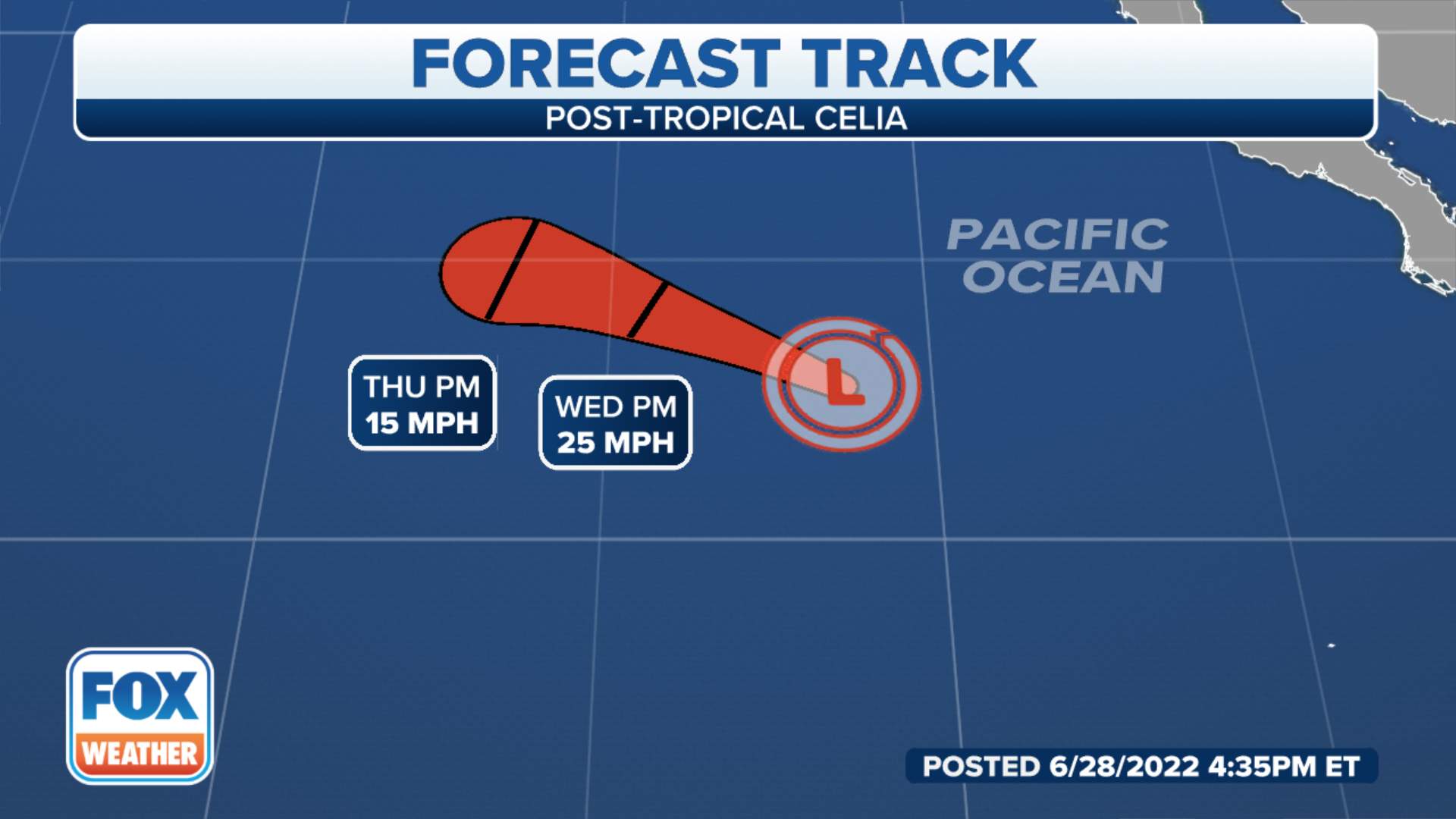 The projected path and intensity of Celia from the latest National Hurricane Center advisory.
(FOX Weather)

As of Friday night, Tropical Storm Celia had maximum sustained winds of around 30 mph and was essentially drifting west at 6 mph.

Scattered downpours and rough surf will be possible across coastal parts of the region as Tropical Depression Celia meanders closer to land. 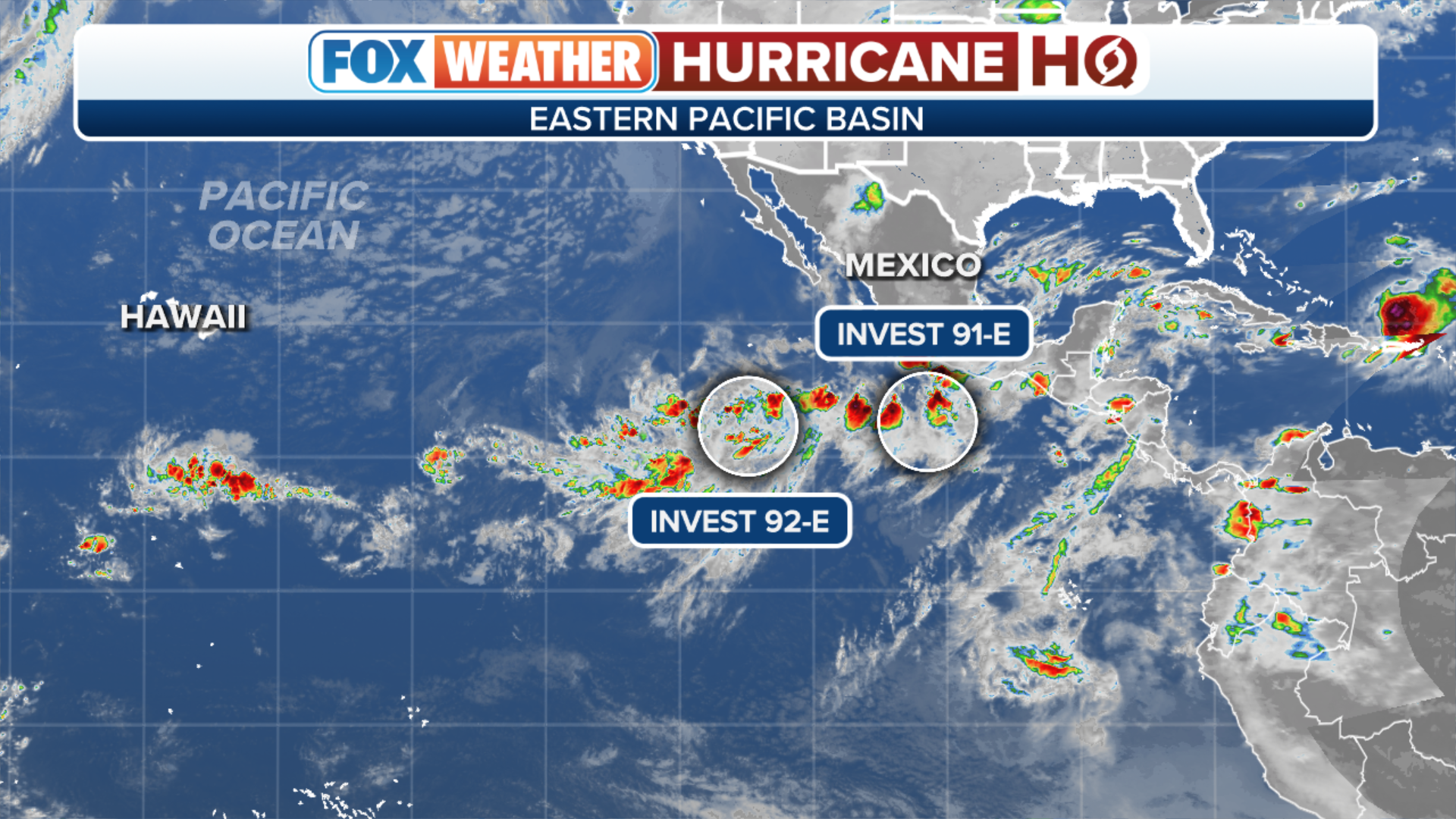 The National Hurricane Center is predicting that 2 to 4 inches of rain will fall across portions of far southern Mexico, El Salvador and Guatemala through Sunday. Localized rainfall amounts up to 8 inches are possible.

This amount of rain has the potential to produce flash flooding and mudslides in those areas.

Later in the weekend, forecast models show a ridge of high pressure building to the north of Tropical Depression Celia, which will send the system westward.

The storm is forecast to eventually regain tropical storm strength, but its westward turn would keep the worst of the weather offshore. 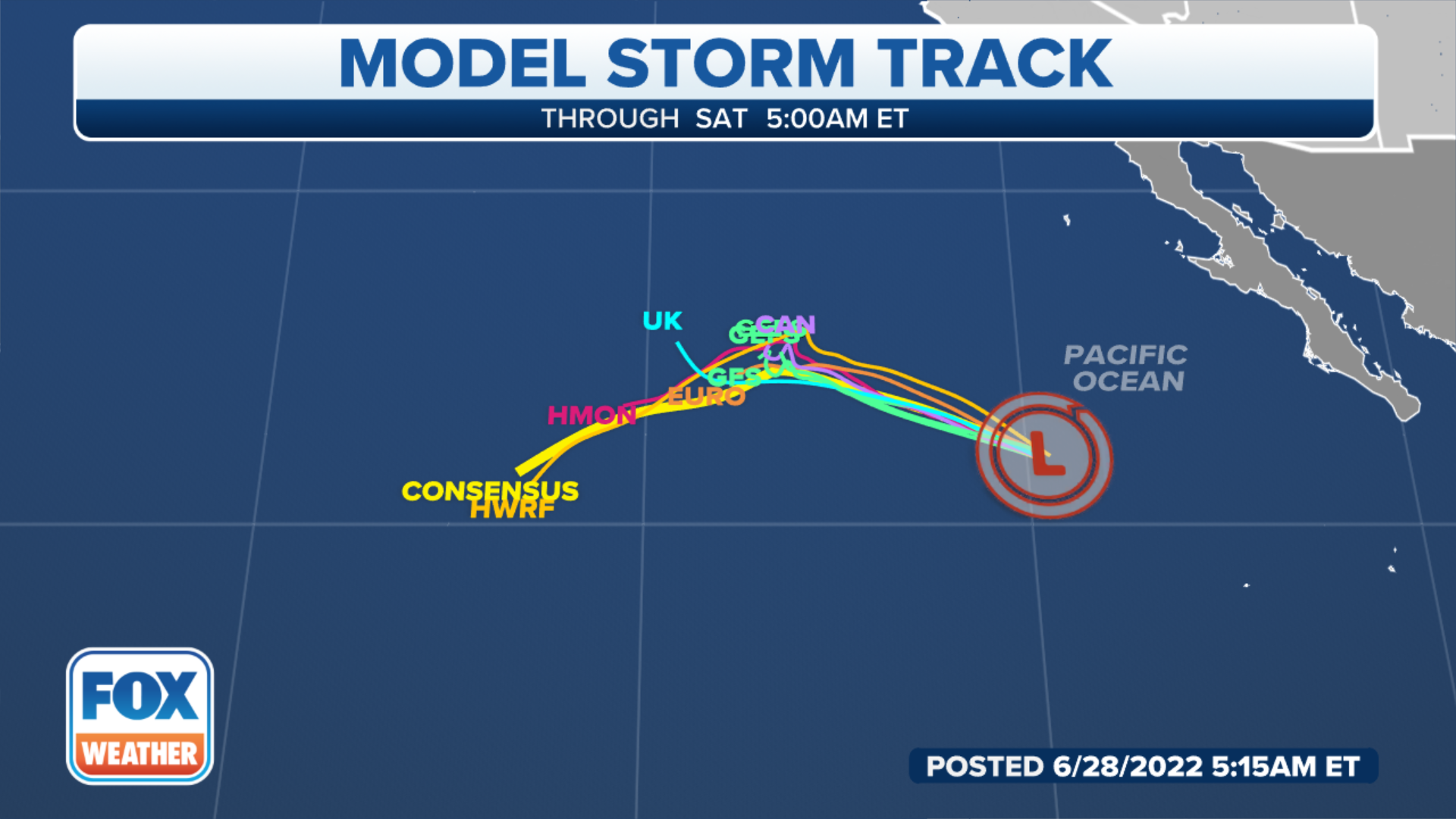 Elsewhere in the tropics, most of the Gulf of Mexico, Caribbean Sea and Atlantic Ocean remain free of any tropical disturbances.

The combination of dry air, Saharan dust and strong upper-level winds have held most of the Atlantic Basin in check since Tropical Storm Alex formed off the coast of the Southeast in early June.

A long tongue of Saharan dust has dried out the atmosphere over most of the tropical Atlantic and the Gulf of Mexico," FOX Weather Hurricane Specialist Bryan Norcross said. "This will act as additional protection, preventing tropical systems from moving north in the immediate future."

It is not unusual for the Eastern Pacific to be busy in June while the Atlantic Basin is still readying itself for the heart of the hurricane season.

Typically, the second named storm in the Atlantic doesn’t form until July 17, and it usually isn’t until mid-August before the basin sees its first hurricane.

The official hurricane season for the Atlantic Basin (the Atlantic Ocean, Caribbean Sea and Gulf of Mexico) is from June 1 to Nov. 30. As seen in the graph above, the peak of the season is Sept. 10. However, deadly hurricanes can occur anytime in the hurricane season.