As the low-pressure system matures on Monday, the strongest winds will shift to the northern Plains. Wind gusts will likely exceed 60 mph in the western Dakotas and 50 mph in the eastern Dakotas, Nebraska, Iowa and Minnesota.

A powerful autumn storm that brought heavy snow to the Rockies and severe weather to the northern Plains over the weekend will continue to spin across the region, setting the stage for more winter weather and some strong, damaging winds.

"We're going to be tracking a bit of a sloppy mess not only throughout the day today but also through the day tomorrow," FOX Weather meteorologist Jane Minar said. "While we've been tracking the severe weather threat that will emerge in the southern Plains, the northern Plains are going to have to deal with a bit of a weather whiplash themselves." 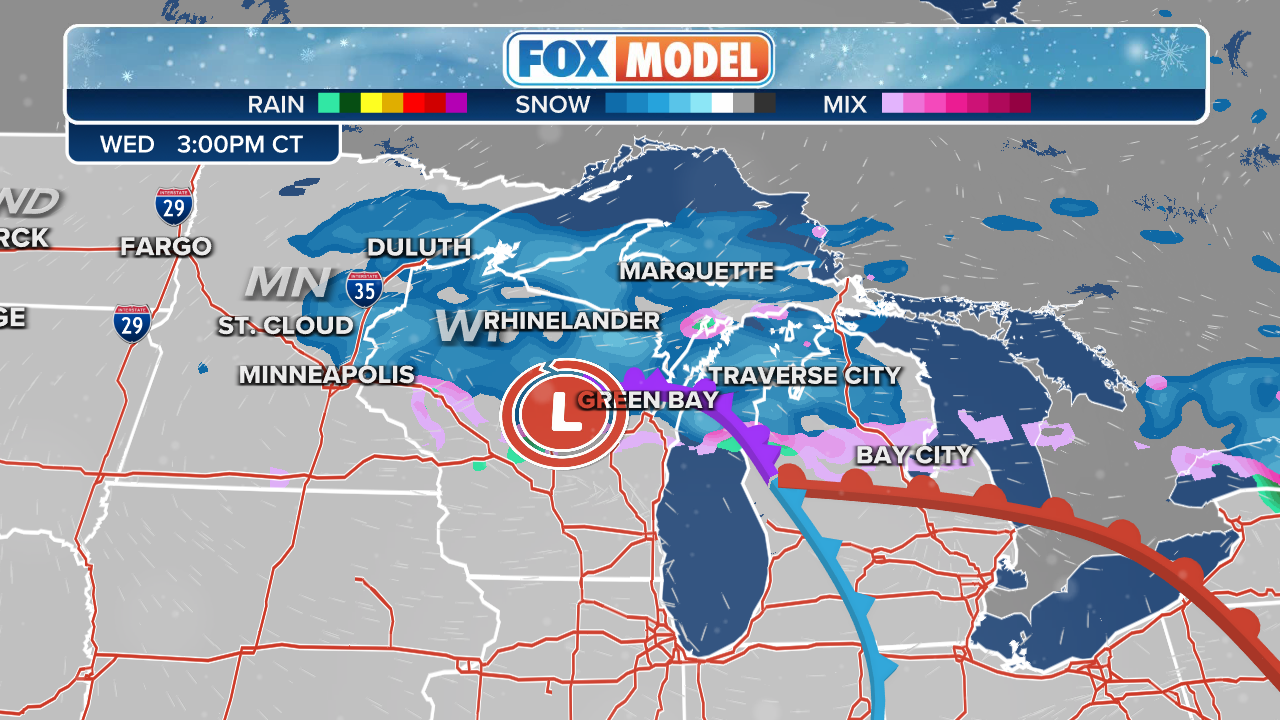 The low-pressure system is currently spinning over the northern Plains on a track that will bring it into Canada.

A warm front extends across the Upper Midwest through places like International Falls, Minnesota, and a cold front extends south through the middle of the country.

"On the back side of that low, we have much colder air, and that's what's changing over to snow, especially in the higher elevations," Minar said.

To the east, it will be a quiet morning weather-wise in the Dakotas and into Minnesota, with only isolated snow and rain showers in those areas.

But, Minar said, as Monday continues, winds will become quite strong as the system begins to push through.

In fact, gusts between 25 and 30 mph have been reported so far in eastern North Dakota and South Dakota, as well as into Minneapolis-St. Paul. 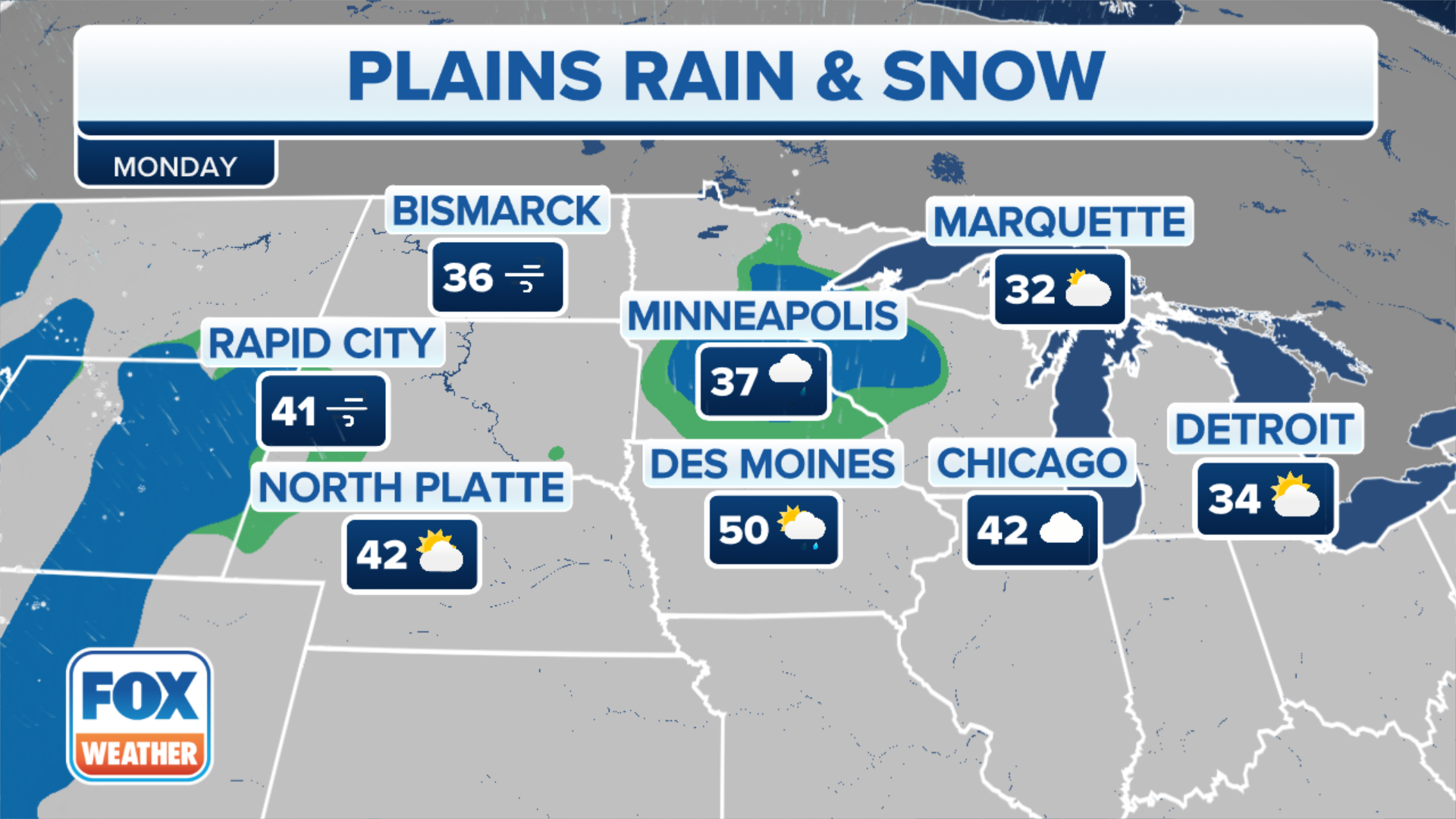 The forecast for Monday.
(FOX Weather)

And on the cold side of the system, the National Weather Service issued Winter Weather Advisories and Winter Storm Warnings in anticipation of some snow and sleet that could make driving conditions a bit difficult through those areas.

"Across the northern Plains, we still have some of that colder air to watch very closely," Minar said. "For Bismarck (North Dakota) today, our high temperatures are only going to get into the lower 40s."

That means there's a chance for some icy weather in parts of the northern Plains on Monday.

"Through your forecast today, as far as snow goes, it's going to be on the minimal side," Minar said. "You might get a few flakes mixed in there throughout the afternoon and into the evening hours. The greater potential, though, will be for ice getting mixed in there. That's going to make for a bit of a tough commute in the evening."

The snow was mostly confined to eastern Montana and parts of Utah, where over a foot of snow fell in locations.

Over the weekend, the storm system was responsible for bringing some heavy snow to the Rockies and Intermountain West.

The snow fell in the higher elevations, like in Georgetown, Montana, where 22 inches of snow fell over the past two days. Snow totals in Alta, Utah, weren't far behind with 20 inches.

Other areas picked up more than a foot of snow, including Big Sky and Bozeman in Montana and McGill in Nevada.

WHEN IS THE EARLIEST IT CAN SNOW IN YOUR CITY?

Snow wasn't the only nuisance with this storm system over the weekend. Wind, too, proved to be an issue, especially in Nebraska. 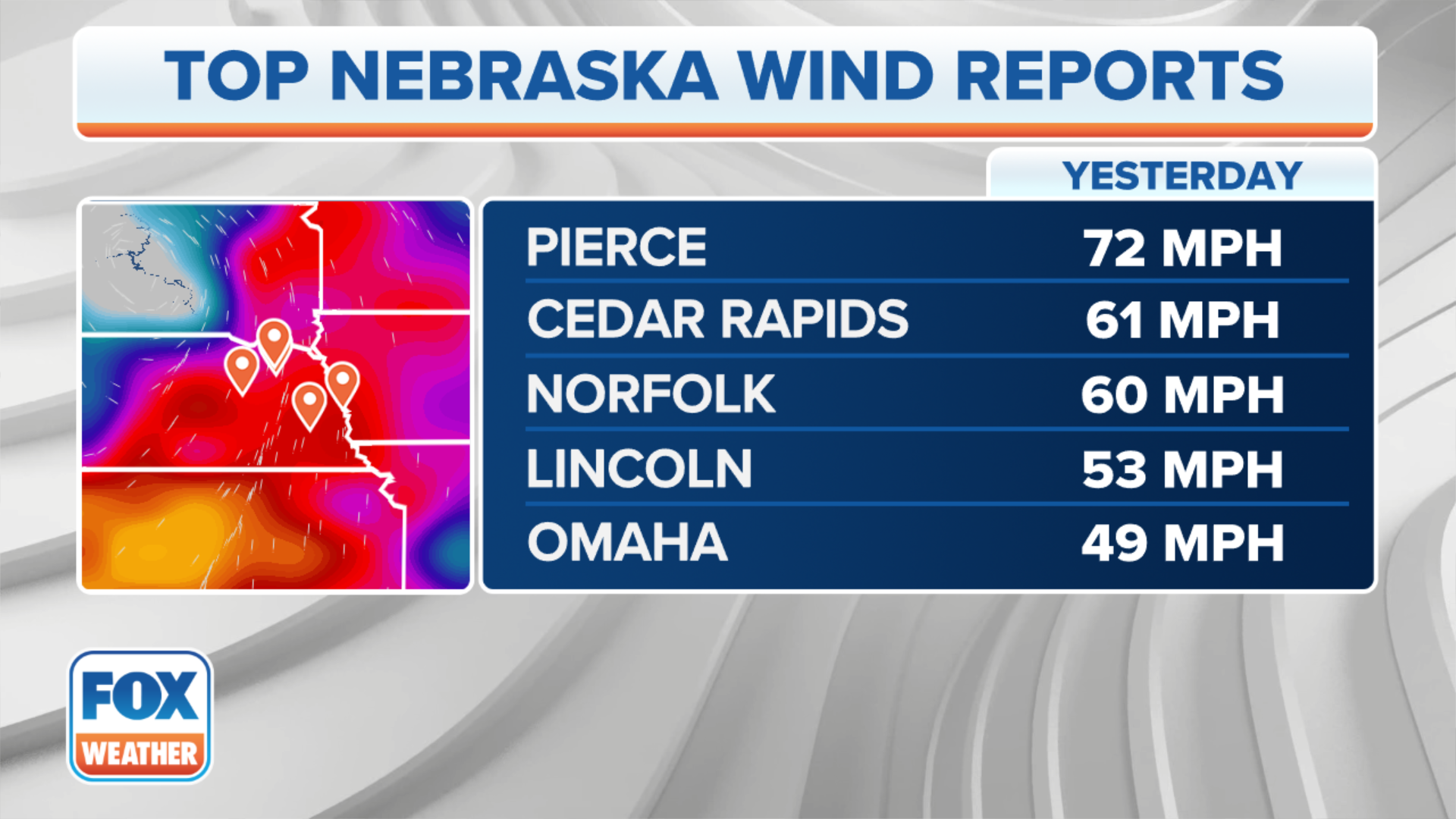 Severe weather was also reported in the northern Plains on Sunday night.

Several Severe Thunderstorm Warnings were issued during the evening hours, as well as a Tornado Warning. However, there is no confirmation that a tornado touched down as of Monday morning.

Damage has been reported, though.

There were also reports of large tree branches being brought down during the severe weather and when strong winds moved through.

In Battle Creek, Nebraska, the NWS received a report that strong winds destroyed a grain bin.