The Juneteenth forecast from coast-to-coast

Juneteenth is celebrated on June 19, and commemorates the end of slavery in the U.S.

It looks like the weather for most Juneteenth celebrations across the U.S. will be sunny and warm.

Juneteenth is celebrated on June 19 and commemorates the end of slavery in the U.S.

On that date in 1865, the official word of the Emancipation Proclamation, which had been issued by President Abraham Lincoln two years earlier, arrived in Galveston, Texas.

Here’s a closer look at the forecast in some places across the country hosting Juneteenth celebrations. 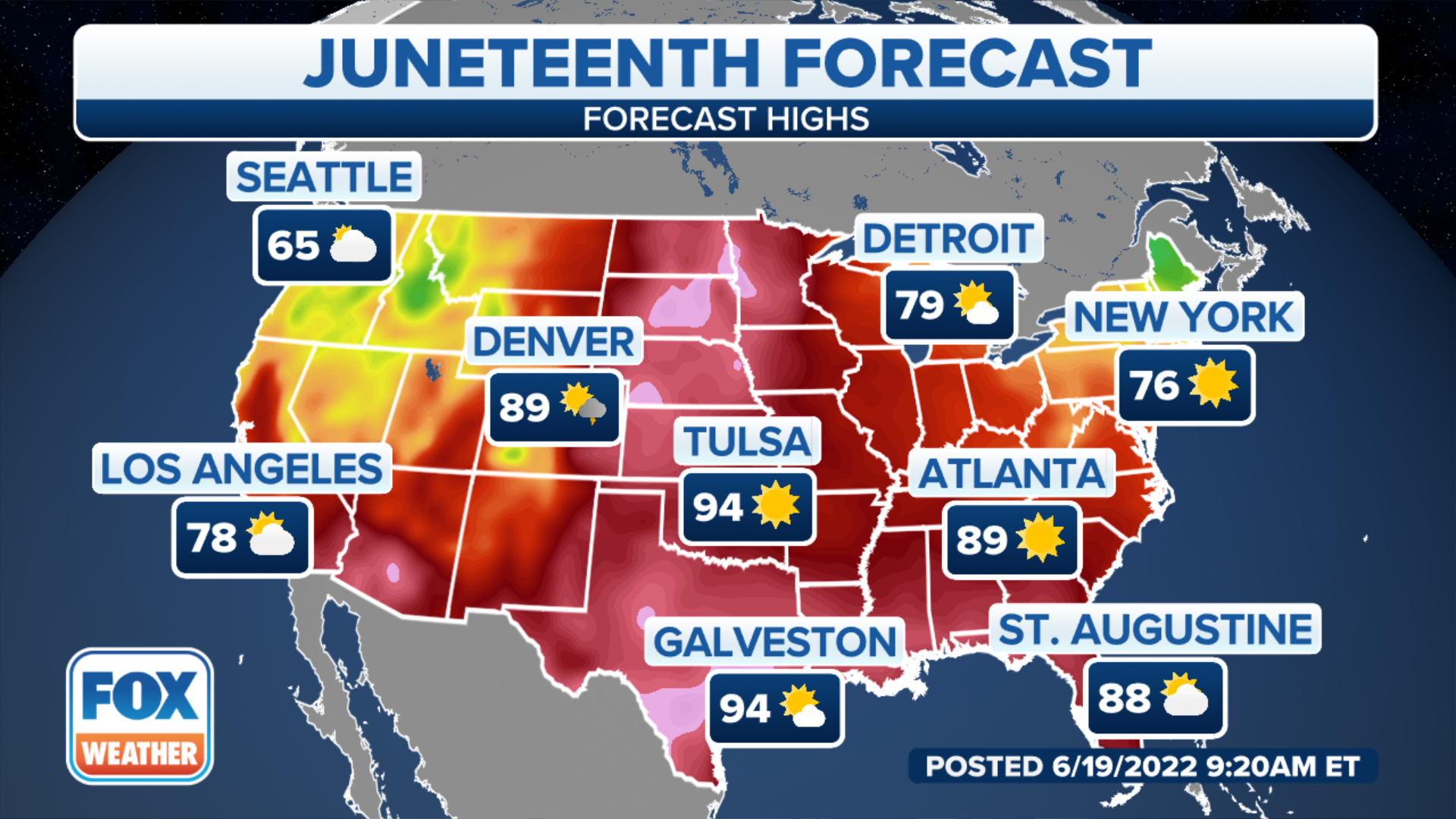 The Juneteenth forecast from coast to coast.
(FOX Weather)

The birthplace of Juneteenth has a weekend packed with events marking the holiday, including a reading of the 1865 proclamation that announced slaves were freed, an emancipation march and the Juneteenth Jubilee.

The forecast for Sunday looks hot and humid with sunny skies and temperatures in the mid-90s.

Atlanta is hosting the 10th annual Juneteenth Festival from Friday to Sunday, including a parade and music festival.

The forecast for Sunday looks warm and sunny with temperatures reaching the upper 80s or low 90s by the afternoon.

While there could be a few scattered storms on Saturday, the weather looks sunny and hot for Sunday. Temperatures will climb into the low to mid-90s by the afternoon.

HOW ST. LOUIS BECAME HOME TO ONE OF THE OLDEST BOTANICAL GARDENS IN THE US

People carry a Juneteenth flag as they march during a Juneteenth re-enactment celebration in Galveston, Texas, on June 19, 2021.

America’s oldest city will host the St. Augustine Music Festival on Sunday as part of the city’s Juneteenth celebration.

The New York City area will host dozens of events this weekend marking Juneteenth, including a charity bike ride, rooftop celebration and a festival.

The forecast looks breezy and mild for most of the weekend. Temperatures will climb into the mid-70s on Sunday afternoon with lots of sunshine.

The Motor City will host the Juneteenth Freedom Fest on Sunday.

The weather looks to be sunny and mild, with temperatures topping out in the upper-70s.

There is no shortage of events celebrating Juneteenth in the Mile High City this year, including the Juneteenth Music Festival.

Scattered storms and breezy conditions could send people celebrating the holiday indoors this weekend. It will be warm, too. Temperatures will be in the upper-80s to low-90s by the afternoon.

HOW WOMEN HELPED TURN MAPMAKING INTO AN ARTFORM

People look on during a ceremony to raise the Juneteenth Flag at Pacific Oaks College in Pasadena Friday, June 17, 2022.

L.A. also has an abundance of Juneteenth events scheduled this weekend.

In true L.A. style, the weather looks to be beautiful in the afternoons after some morning fog. Temperatures in the upper-70s are forecast.

The annual Juneteenth Celebration in Seattle happens Sunday, and this is one of the places on the list where the weather won’t be ideal.

Rainy weather is forecast all weekend, with temperatures only climbing into the mid-60s on Sunday. Expect cloudy skies when it isn’t raining.