Favorable weather is forecast for large majority of country on Halloween

Favorable weather is forecast for a large majority of the country this Halloween. The only regions that will deal with less than ideal trick-or-treat conditions will be the Pacific Northwest and parts of the Midwest/Mid-Atlantic.

Spooky season is upon us, and whether you're making plans to bring the kids trick-or-treating or creating the best costume to show off at a Halloween party, you're going to need to know if the weather will cooperate.

So listen up, guys and ghouls! FOX Weather has you covered with a look at the Halloween forecast… from "coast to ghost."

What's the weather on Halloween? 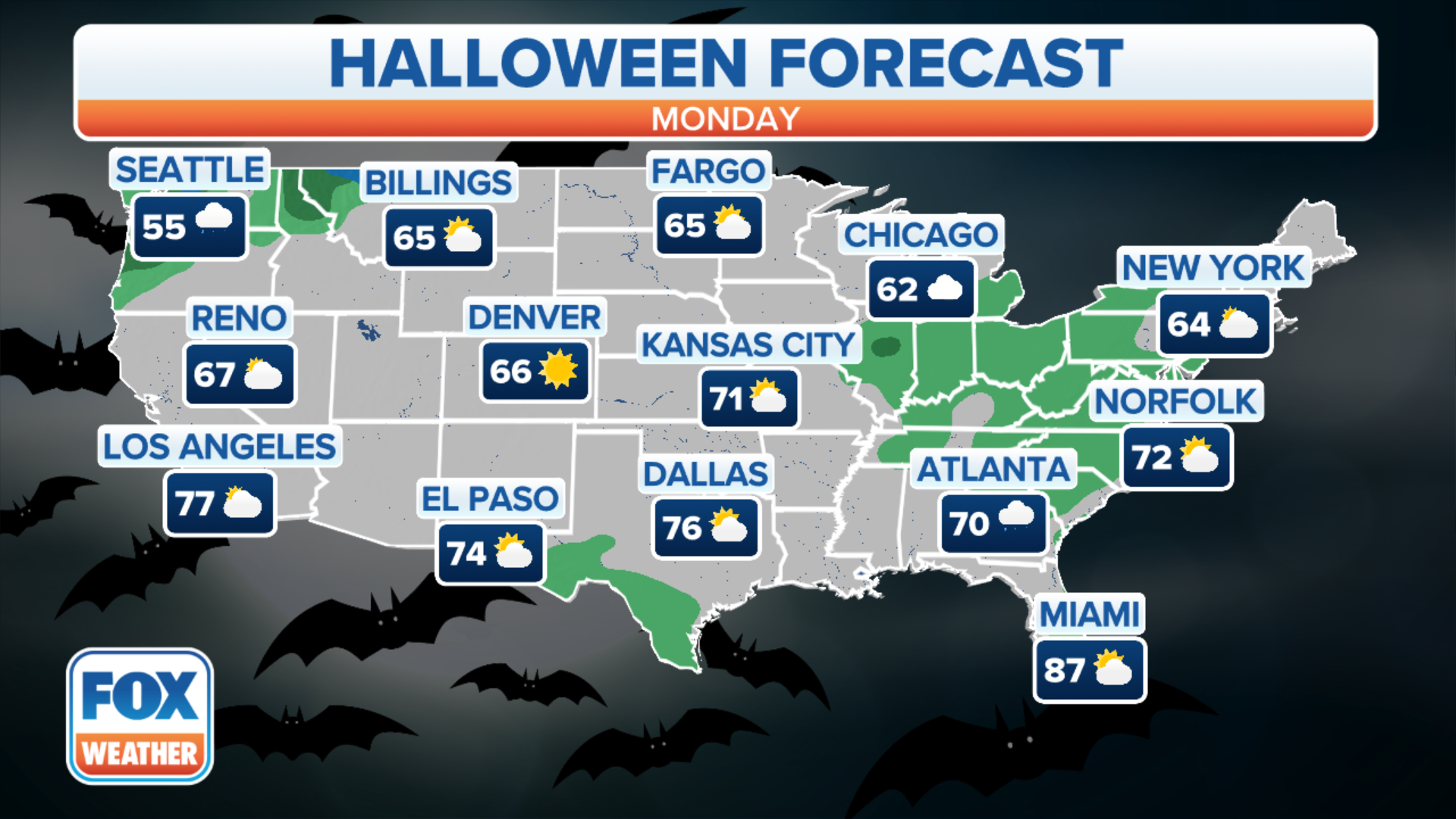 A look at the forecast from coast to coast during the day on Halloween.
(FOX Weather)

With Halloween falling on a Monday this year, many people celebrated the spooky holiday over the weekend.

But for those diehard Halloween fans, Monday night is the night for trick-or-treating or heading off to a Halloween party.

Most of the country will see favorable conditions during the day on Monday, but there will be some trouble spots. Rain is expected in the Ohio and Tennessee valleys, and that rain threat stretches into the mid-Atlantic and parts of the Northeast.

South Texas could see rain during the day as well, and for people living in the Pacific Northwest, you will likely see rain in the lower elevations and snow as you move into the higher elevations.

Temperatures will also remain mild during the day across the country.

In the Northeast, New York City will stay in the mid-60s and heading south into Norfolk, Virginia, and Atlanta, temperatures will remain in the low 70s.

Heading west, temperatures will be in the 70s from Kansas City to Dallas and El Paso, Texas.

Denver, Billings, Montana and Fargo, North Dakota, will remain in the mid-60s.

WHAT ARE THE ODDS OF A WHITE HALLOWEEN?

What will the weather be for trick-or-treating on Halloween? 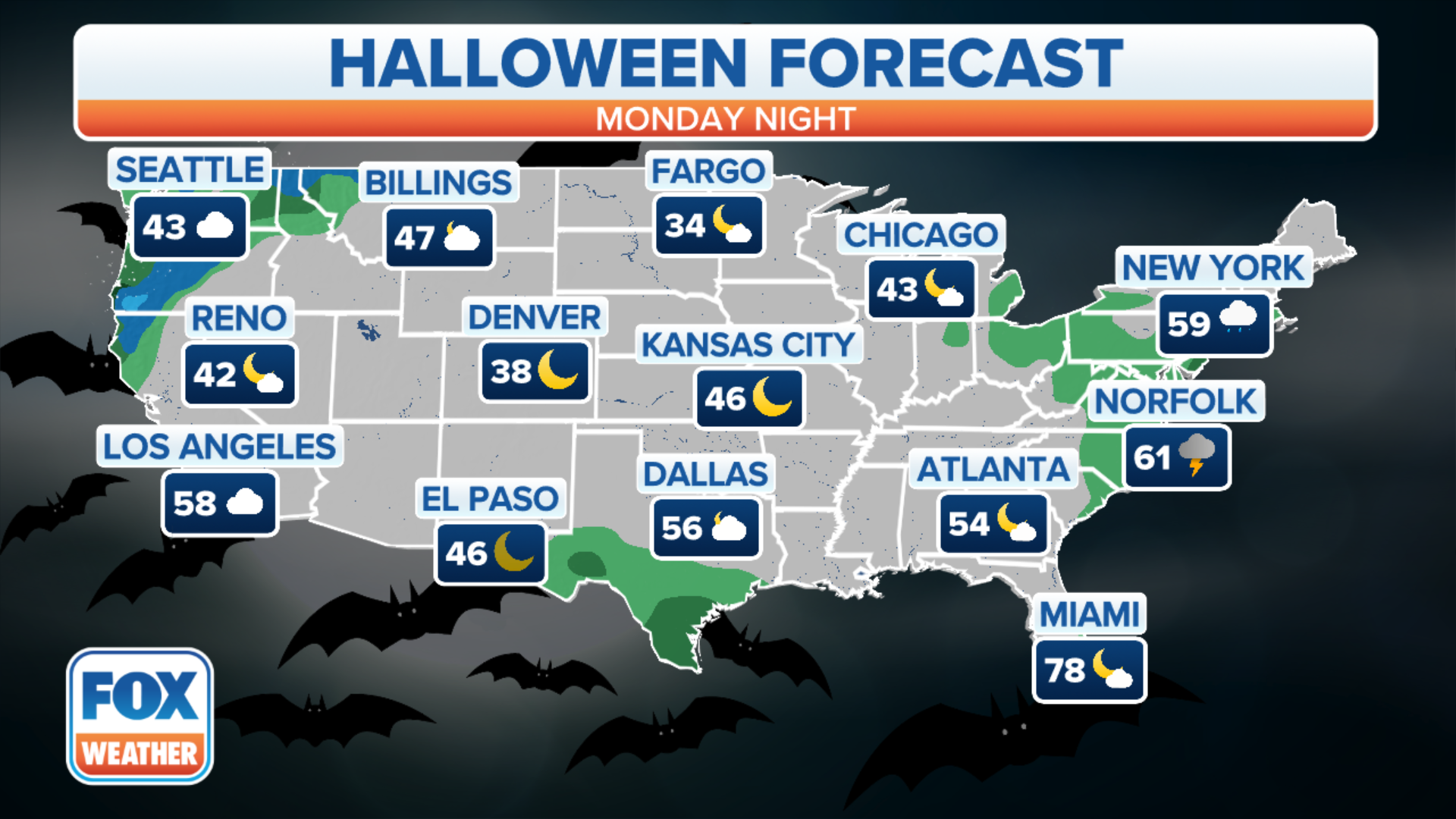 A look at the forecast from coast to coast on Halloween night.
(FOX Weather)

And as we head into Halloween night and the overnight hours, temperatures will begin to drop across the country.

"Many of you are getting ready to do some trick-or-treating with your little ones, and we have weather that is very nice. At least away from the coast. That's where we have some issues," FOX Weather meteorologist Britta Merwin said. "In the Northwest, also in South Texas and going up the Atlantic coastline. A lot of rain from Indiana through Ohio and stretching all the way to the I-95 corridor. So in these locations, you're going to want to grab the rain gear and keep an eye on the visibility."

Even if it's not raining, a coat might be a good idea in the Intermountain West, where it will end up rather chilly after sunset.

Elsewhere, temperatures will drop into the 60s from New York City to Norfolk, and Atlanta should fall back into the mid-50s.

As usual, no worries about coats along South Beach – Miami will remain warm, with nighttime temperatures in the upper 70s.

It will drop into the mid to upper 30s from Fargo to Denver, and cooler temperatures will stretch from Reno, Nevada to Seattle, which will likely be in the low to mid-40s.