Major winter storm dumps feet of snow across the Sierra

The potent storm system is underway and has already brought widespread impacts to northern and central California. 1-3" of rain has fallen in lower elevations and as much as 7" has been recorded in the foothills of the Sierra and the Santa Cruz mountains south of the Bay Area.

Patrick Lacey, Public Relations Manager for Palisades Tahoe, says it’s shaping up to be a great season for the Olympic Valley ski resort with the area having received more than 9 feet of snow in the month of December.

Wind-whipped snow led to frequent whiteout conditions along major cross-mountain highways, shutting the roads down for hours and knocking out power to thousands in the region.

HOW TO DRIVE IN ICY CONDITIONS

CalTrans closed a 50-mile stretch of Interstate 80 across the Sierra Saturday into Sunday as conditions were too dangerous for travel with whiteout conditions reported at Donner Summit.

Snow totals ranged from 2 to 4 feet across the area, with Sierra at Tahoe reporting a storm total of 70 inches and Boreal Mountain ski resort reporting a whopping 60 inches of snow – 5 feet – within 48 hours.

Even the popular South Lake Tahoe area was slammed, reporting 30 to 36 inches during the storm, according to city officials.

The weight of the heavy snow led to power outages.

YOU WERE JUST INVOLVED IN A WEATHER-RELATED CRASH - NOW WHAT?

Gusts reached over 50 mph in other towns along the Sierra, including a 59-mph gust at Truckee, California. But gusts hit well over triple digits across some of the mountain ridgetops.

Ward Mountain recorded a gust of 165 mph, which is a wind speed more associated with a Category 5 hurricane. Big Pines hit a gust of 88 mph. 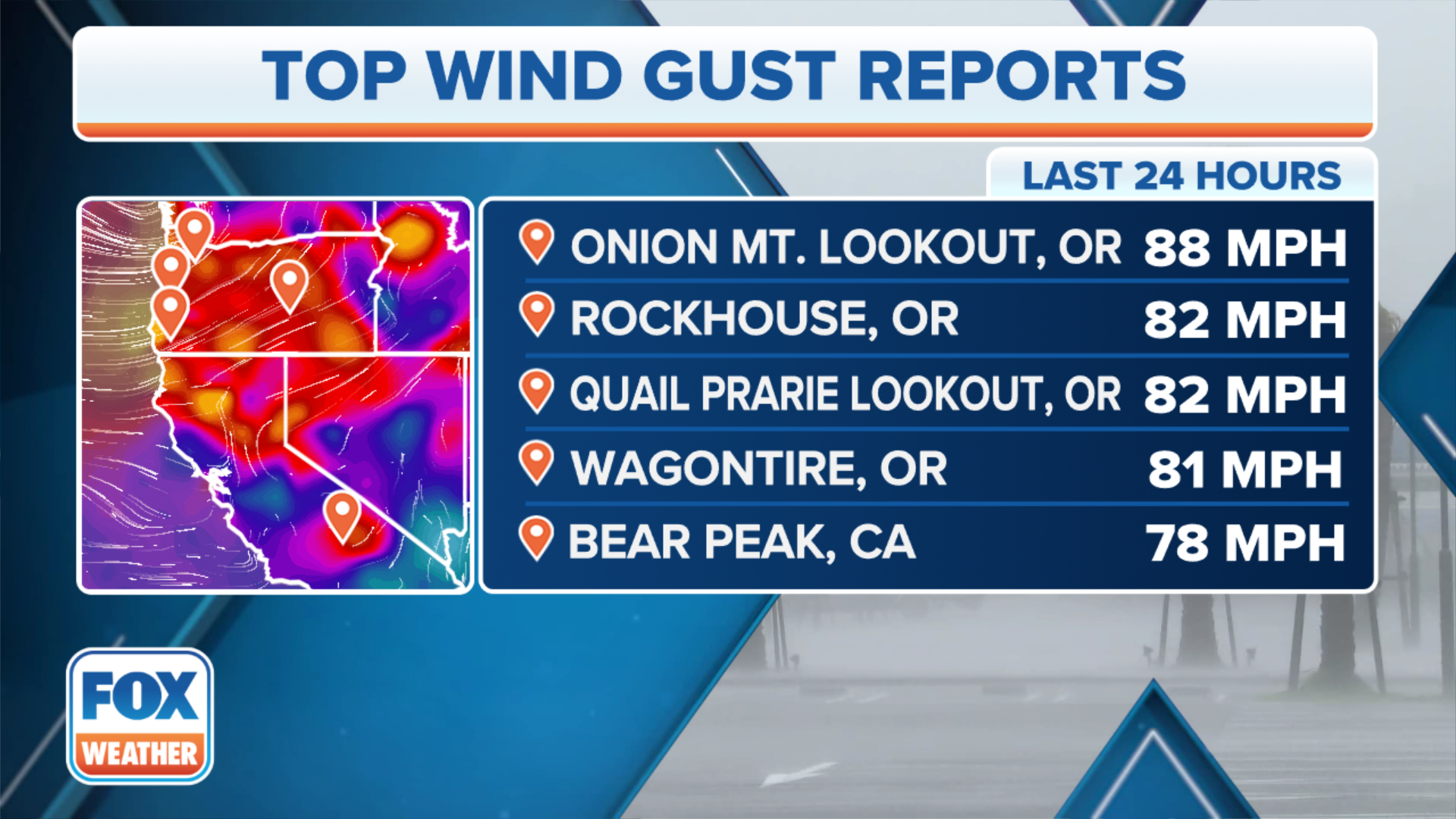 The University of California Berkeley's Central Sierra Snow Lab reported 37.8 inches in 24 hours, with snow falling at rates of 4 to 5 inches per hour.

They received nearly 4 feet of snow in 48 hours.

The heavy snows have sent snowpacks in California to mind-boggling totals. Snowfall in the Sierra was measured at 153.7 inches, which is nearly three times the average amount for mid-December. The eastern Sierra Tahoe Basin has already received about 40% of its average annual snowfall – sitting with an amount of snow that would be expected around Jan. 9.

In the California lowlands, heavy rains led to localized flooding issues. About 1 to 1.5 inches fell across the Bay Area and Sacramento Valley, with rainfall totals reaching 4 to 6 inches along the Central California coast – locally 8 inches just south of Big Sur in the Santa Lucia Mountains.

A 30-mile stretch of California's Highway 1 was closed just south of Big Sur due to rocks and debris on the roadway.

The National Weather Service took dozens of reports of flooded roadways across the region, with water covering parts of Interstate 5 north of Coalinga in the San Joaquin Valley.

One man was hospitalized after being caught in the swollen Santa Ana River at Garden Grove Blvd. in Santa Ana, the NWS reported. His condition has not been released.

A man was taken to the hospital after fire officials rescued him from the Santa Ana river bed on Sunday morning.

The storm has moved off to the east, where it is expected to wreak havoc with the rest of the nation as it sweeps across the country, with blizzard conditions expected in the North and a likely severe weather outbreak across parts of the South.

Meanwhile, calmer, drier weather is expected to settle in across the entire West Coast for the rest of the week.