41Posts
Back to Top

The storm system that brought snow and ice to millions from New Mexico to Maine is pulling away from the U.S.

Meteorologists warn that any melting of snow and ice that took place during the day will likely refreeze as temperatures for a large part of the country drop to below freezing overnight.

The last hours of snow and freezing rain are impacting the Northeast.

Video: 300K+ without power due to storm

States with the most power outages include New York, Ohio and Tennessee. Some utility providers say it could several days to restore services, after millions saw freezing rain, sleet and snow.

The winter storm produced more than a foot of snowfall around the Great Lakes and in areas of upstate New York, Vermont and New Hampshire.

The snow is forecast to taper off during the overnight hours as the system continues its eastward trek.

Check out snowfall totals around the country: Click Here

VIDEO: Slippery roads lead to dozens of crashes in Massachusetts

Here's what to do if you find yourself in a weather-related crash: Click Here

FlightAware reports more than 600 scheduled flights on Saturday have already been canceled as airports and airlines work to return back to normal operations.

The Dallas Fort Worth International Airport reopened a third runway on Friday afternoon, with the hopes that operations will return to normal. The airport says they’ll continue to treat the runways because of the freezing temperatures.

After the freezing rain, snow and sleet departs the Northeast overnight, temperatures are expected to plummet over the weekend. Lows on Sunday morning are forecast to reach the single digits for many locations from the Ohio Valley to New England.

A winter storm dumped heavy snow on parts of Morrow County, in north-central Ohio, on Feb 4, 2002.

This video, streamed live on Facebook by the Morrow County Sheriff’s Office, shows a plow truck driving to clear snow on County Road 101.

The National Weather Service issued a winter weather advisory for parts of northern Ohio on Friday, warning of “treacherous” driving conditions causing accidents in many areas.

Aerial view of Columbus, Ohio, after winter storm brings all the elements

FOX Weather's Robert Ray captured this video of Columbus, Ohio, from above after a winter storm brought all the elements.

Make sure to follow FOX Weather on social media for more videos, photos and coverage of the winter storm. Don't forget to tag us in your weather photos or use #FOXWeather.

Long weekend ahead for power restoration in ice-covered West Tennessee

The Memphis, Tennessee, area is dealing with a deep freeze and significant ice as thousands remain without power for a second day.

FOX Weather's Will Nunley has a closer look at the conditions there.

Boston gets another dose of winter weather following blizzard

FOX Weather's Brandy Campbell is in Boston, Massachusetts, ahead of a winter storm that comes just days after a blizzard.

FOX Weather's Brandy Campbell reports surfaces are slushy with a light layer of sleet over the old blizzard snow in Boston.

Three of those four listed need it to be a winter storm, but one can happen year-round – even in the summer. Click here to read more.

The FOX Weather 3D Radar is tracking heavy snow and freezing rain moving through the Northeast. Download the free app now to follow the movement of the winter storm.

How much snow, ice has fallen during winter storm so far

Here’s a look at the biggest snowfall and ice amounts reported so far, according to the National Weather Service. 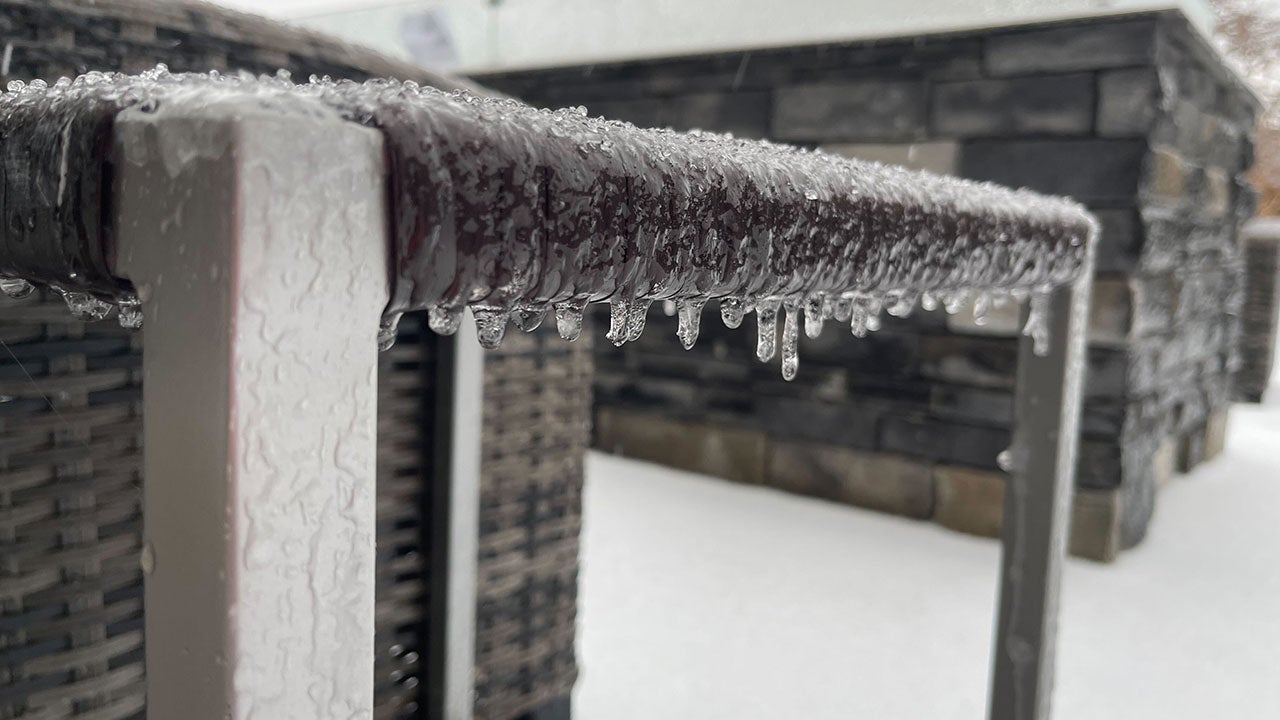 EXTREME WEATHER
How much snow, ice has fallen during winter storm so far
A powerful winter storm that stretches across a huge swath of the U.S. has already dumped heavy snow and disruptive ice in several states.
Posted by Chris Oberholtz Share

Massachusetts State Police said their patrols have been responding to numerous crashes and spin-outs caused by the flash-freeze conditions.

What do you prefer?

FOX Weather's Brandy Campbell asked some Bostonians if they'd prefer snow or ice. Here's what they had to say.

Watch as the jet engines from a Delta plane thrust the snow off the runway at John Glenn Columbus International Airport in Ohio.

Crews are working hard at John Glenn Columbus International Airport to remove the snow from runways as the winter storm has moved on.

The airport is located 15 minutes from downtown Columbus, Ohio, the 14th largest city in the U.S.

Hayden Phillips, 17, took to the "whites" Thursday morning as he pulls out his "ice wedge" for a little winter golf practice on a brisk morning in Murphy, Texas. Click here to watch.

The National Weather Service office in Boston tweeted out this loop of expected precipitation types across southern New England through Friday night. It shows rain changing to sleet and freezing rain through the day, then changing to snow Friday night.

"Dangerous travel anticipated due to a flash freeze," the NWS wrote in the tweet.

Wintry mix to continue much of the day in Northeast

A mix of sleet and freezing rain is expected to continue much of the day where temperatures have fallen below freezing. This includes areas from central and southern New England to northern New Jersey and northeastern Pennsylvania, including Boston and the New York City tri-state area.

NOAA's Storm Prediction Center says the freezing rain is expected to fall at the rate of 0.05 inches per 3 hours, which will create slick travel conditions across the region.

In New York City, the temperature fell from 56 to 38 degrees in one hour between 7 a.m. and 8 a.m. as the cold front moved across the Big Apple.

The weight of the ice was no match for an art installation in the Edge District neighborhood in downtown Memphis.

The road is closed under the icy feature, FOX Weather's Will Nunley reports.

It's 18 degrees in Chicago, Illinois, on Friday. Some areas of Chicago received as much as a foot of snowfall. So what is normal for this time of year? FOX Weather's Max Gorden has the latest.

Hundreds of vehicles have been stranded Friday because of icy conditions on a stretch of Interstate 10 in Texas.

According to FOX 29, there have been a few crashes on the westbound side of the freeway near Kerrville for several hours. A jackknifed tractor-trailer is among the incidents that have blocked the road. Click here to read more. 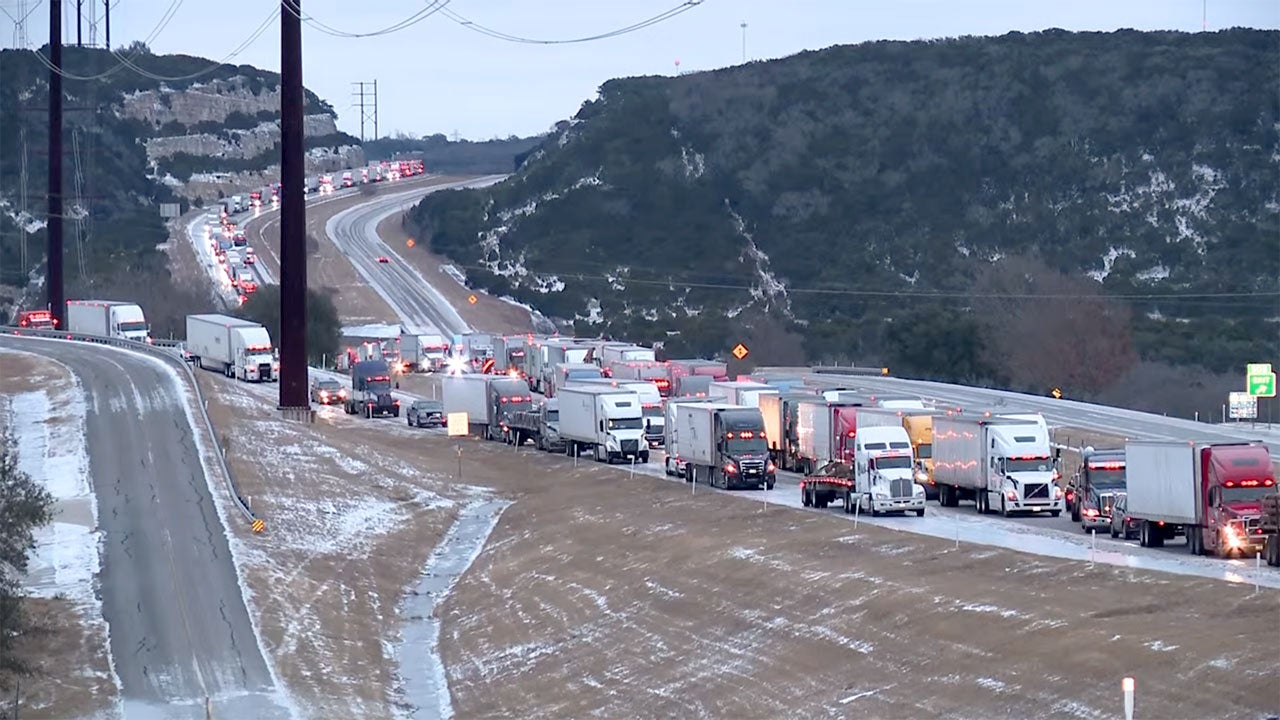 Tennessee troopers work multiple crashes on parts of icy I-840

Interstate 840 at the 32-mile marker in Williamson County, Tennessee, is closed while authorities work multiple crashes.

The Tennessee Highway Patrol's Nashville District said the interstate in that area is very slick.

Authorities in Williamson County said they have responded to 28 weather-related crashes since midnight. No fatalities were reported.

This comes after six people were hurt Thursday as 16 cars crashed along Memphis' Austin Peay Highway, according to Memphis Fire Department. Two of the victims were critically injured while the other four were described by Memphis Fire as "noncritical."

FOX Weather multimedia journalist Will Nunley is in Memphis where a winter storm is leaving thousands without power across Tennessee. Click here to watch his latest report.

As the winter storm has already impacted many, it has made its arrival in the Northeast bringing with it snow, sleet, rain and dangerous driving conditions.

FOX Weather’s Mitti Hicks is in Buffalo, New York, with a look at road conditions as a Winter Weather Advisory is in effect.

There is a new ground delay at Dallas-Fort Worth International Airport of over four hours for every U.S. departure to the airport.

Out of an abundance of caution, Southern Connecticut State University will be closed Friday due to the continued potential for icing conditions across many parts of the state.

Vehicles trapped on I-10 due to icy conditions near Kerrville, Texas

FOX Weather is monitoring a situation in Kerryville, Texas, where people have been trapped in their vehicles on Interstate 10 for the past 12 hours. The backup is dozens of miles long with freezing temperatures. We will be monitoring this all morning long.

Travel conditions less than favorable in parts of Ohio

Many snow-covered roads, especially on side streets, in the Wilmington, Ohio, area.

The National Weather Service said with additional snow accumulations possible through the early afternoon, travel conditions will continue to be less than favorable.

7 ways to stay safe while using a generator

With scattered power outages across the Northeast expected today due to ice, make sure you practice generator safety.

They can be dangerous if safety precautions aren't met. Here are seven ways to make sure you stay safe while using a generator. 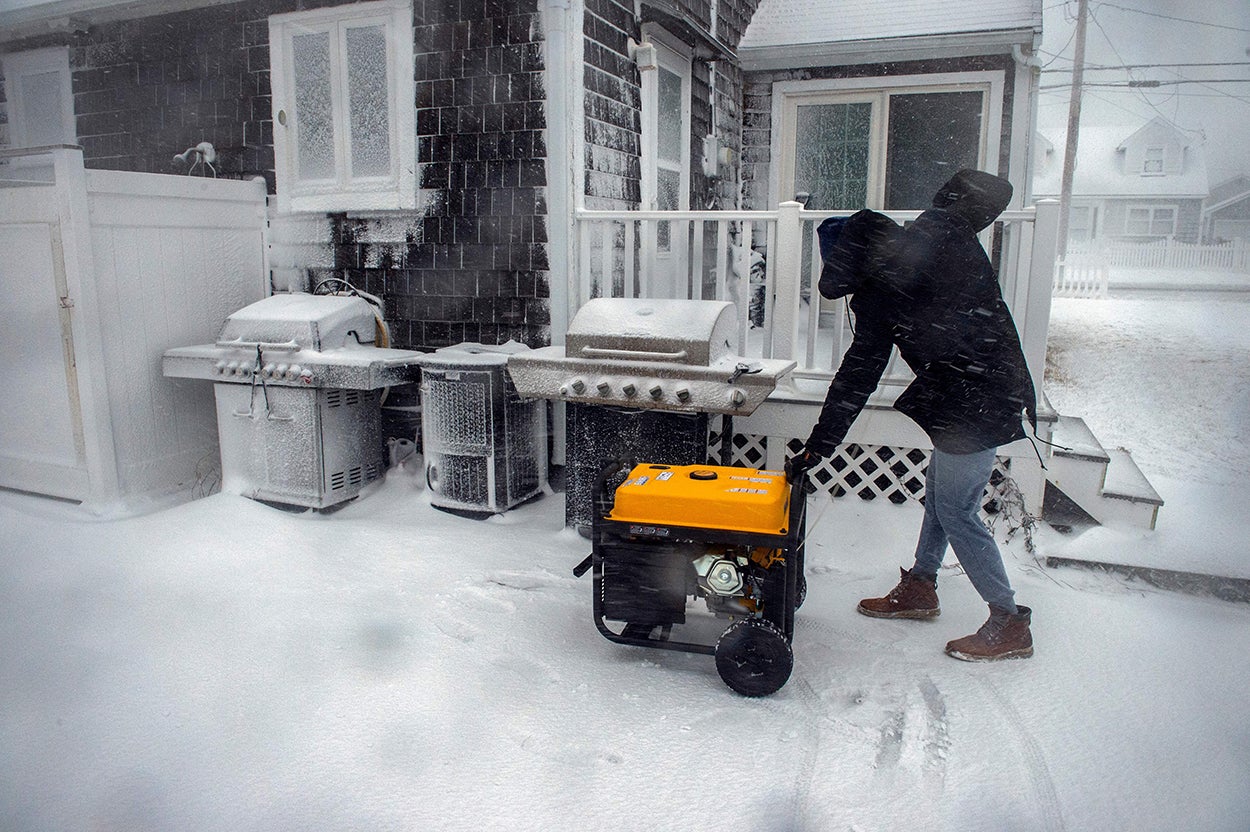 LEARN
7 ways to stay safe while using a generator
When storms strike and the power goes out -- perhaps for an extended period -- many will rely on generators to keep the electricity flowing in their homes.
Posted by Chris Oberholtz Share

Ice coats trees outside the office of the National Weather Service in Moon, Pennsylvania, as freezing rain moves through the area Friday morning.

Multiple crashes, vehicle slide-offs on I-93 in New Hampshire

New Hampshire State Police are bust on Interstate 93 Northbound in Bow as troopers respond to multiple crashes and vehicles off the road.

Winter Storm Warnings remain in effect on Friday from northern and eastern Ohio to western West Virginia, northern and western Pennsylvania, upstate New York, northern Massachusetts, Vermont, New Hampshire and Maine. This includes Syracuse and Albany in New York, Burlington and Montpelier in Vermont and Portland and Bangor in Maine.

Temperatures in central and southern New England will rapidly fall into the 20s Friday morning into early afternoon as colder air is ushered in from north to south.

The National Weather Service office in Boston says this will result in icy road conditions across the region, including the Boston metro area, as rain changes over to freezing rain and sleet.

However, the changeover to wintry precipitation should hold off until after the morning rush hour in the city of Boston.

"Use cation if traveling today," the NWS said in a tweet early Friday morning.

Moderate to heavy snow is ongoing and expected to continue through Friday morning from portions of eastern/upstate New York into Vermont, New Hampshire and Maine.

NOAA's Storm Prediction Center says snowfall rates in excess of 1 inch per hour are likely in the heaviest snowbands.

Freezing rain will continue from portions of central Pennsylvania into the Poconos and Catskills, northern Connecticut, southern Vermont and southern New Hampshire over the next few hours. It's expected to fall at the rate of 0.05 inches per hour, which will create slick travel conditions across this region.

NOAA's Storm Prediction Center says the threat of ice should remain north and west of the Boston-to-New York City Interstate 95 corridor through the morning rush hour.