Tropical downpours in South Texas could lead to flash flooding on Sunday.

A combination of weak fronts draped across the South will be the focus of rounds of showers and thunderstorms from Texas to Florida on Sunday.

And because of the scattered nature of the wet weather, areas along Interstate 10 may see only an inch of rain, while others could pick up nearly six inches in total.

The FOX Forecast Center says any slow-moving showers and storms that do pop up have the potential of producing downpours, which could cause localized flooding. 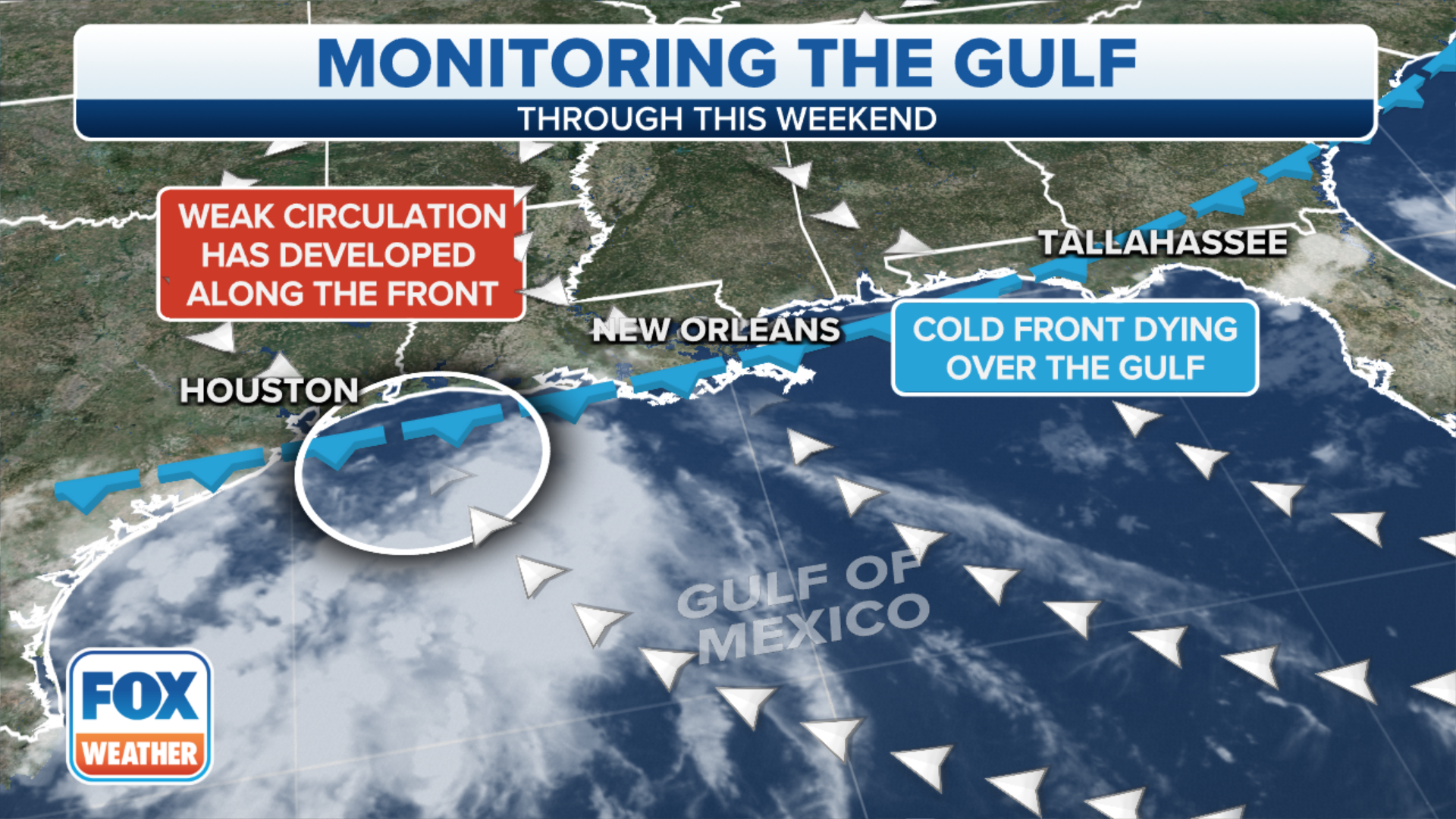 Cities from New Orleans eastward to Tallahassee, Florida, are in the bulls-eye.

Due to the scattered nature of the activity, the National Weather Service has not issued any Flash Flood Watches for the region but warns isolated flooding is a possibility in low-lying areas.

Heavy rainfall will also impact the Florida Peninsula, where one to two inches of precipitation will be possible during afternoon downpours through the next three days. 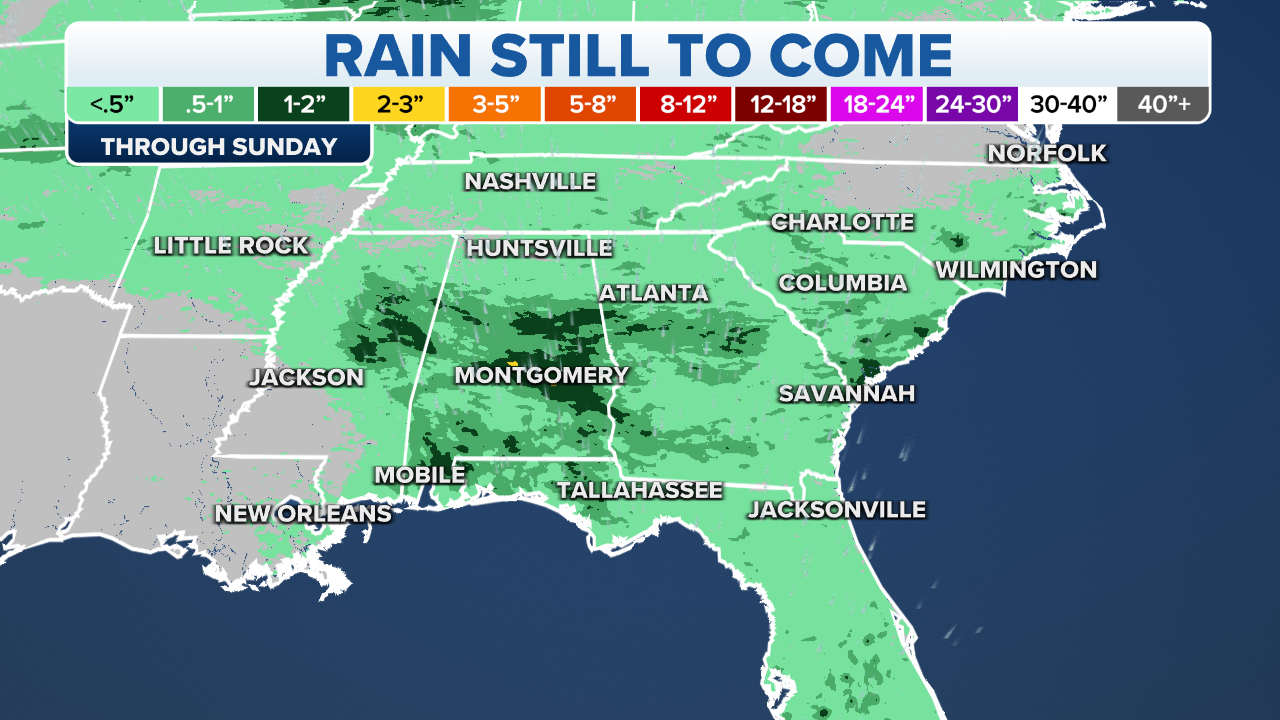 The FOX Forecast Center says thunderstorms could put down a quick one to three inches of rain.

Houston, Galveston, San Antonio, Corpus Christi and Brownsville are all cities where heavy rain will be possible.

Forecast models show isolated communities could pick up on upwards of half a foot of rain, especially between San Antonio and the Mexico border.

WATCH A WIND TURBINE DISINTEGRATE IN TEXAS AFTER A LIGHTNING STRIKE 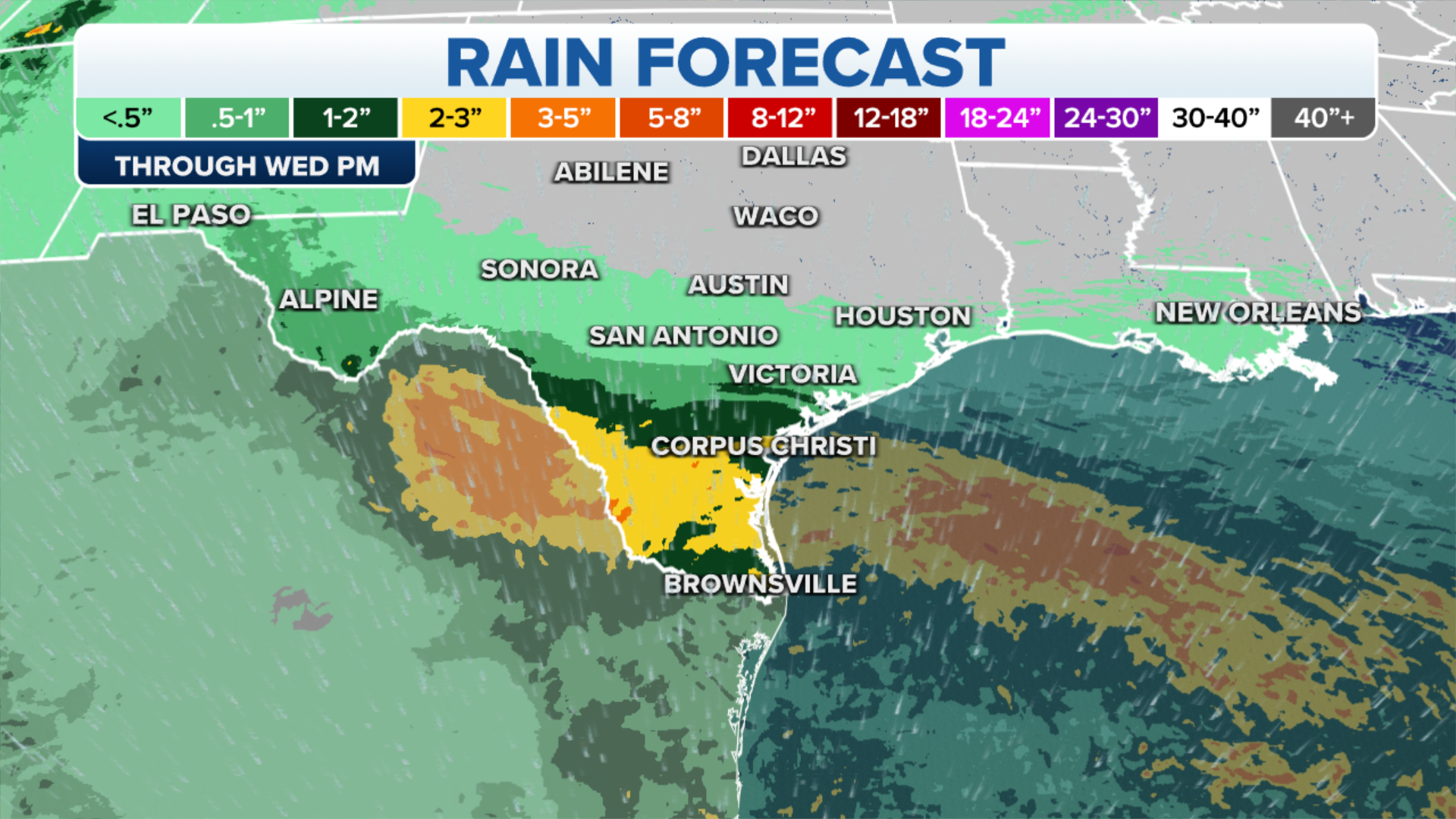 The National Hurricane Center is also monitoring the frontal boundary for the chance of any of the complexes of showers and storms becoming more organized while off the coast of Texas.

The FOX Forecast Center says water temperatures in the Gulf of Mexico are some of the warmest in the basin, and so attention will focus on seeing if the activity can persist.

The NHC is only giving the area about a 10% chance of developing into a cyclone over the next five days and is identifying the system as invest 98L. The National Hurricane Center is giving the system a 10% chance of development.
(FOX Weather)

Forecast models show the disturbance drifting west to west-southwest and impacting the Texas coastline this weekend.

Whether or not the disturbance develops into a full-fledged tropical cyclone will not change the expected impacts.

"There is a slight chance a surface circulation could develop before the disturbance reaches the Texas coast, which is why the National Hurricane Center is indicating a potential development zone on the map. It’s unlikely that more than a tropical depression would develop, which wouldn’t make much difference to the heavy-rain scenario that will be in place even if no organized circulation can generate," FOX Weather hurricane specialist Bryan Norcross said. 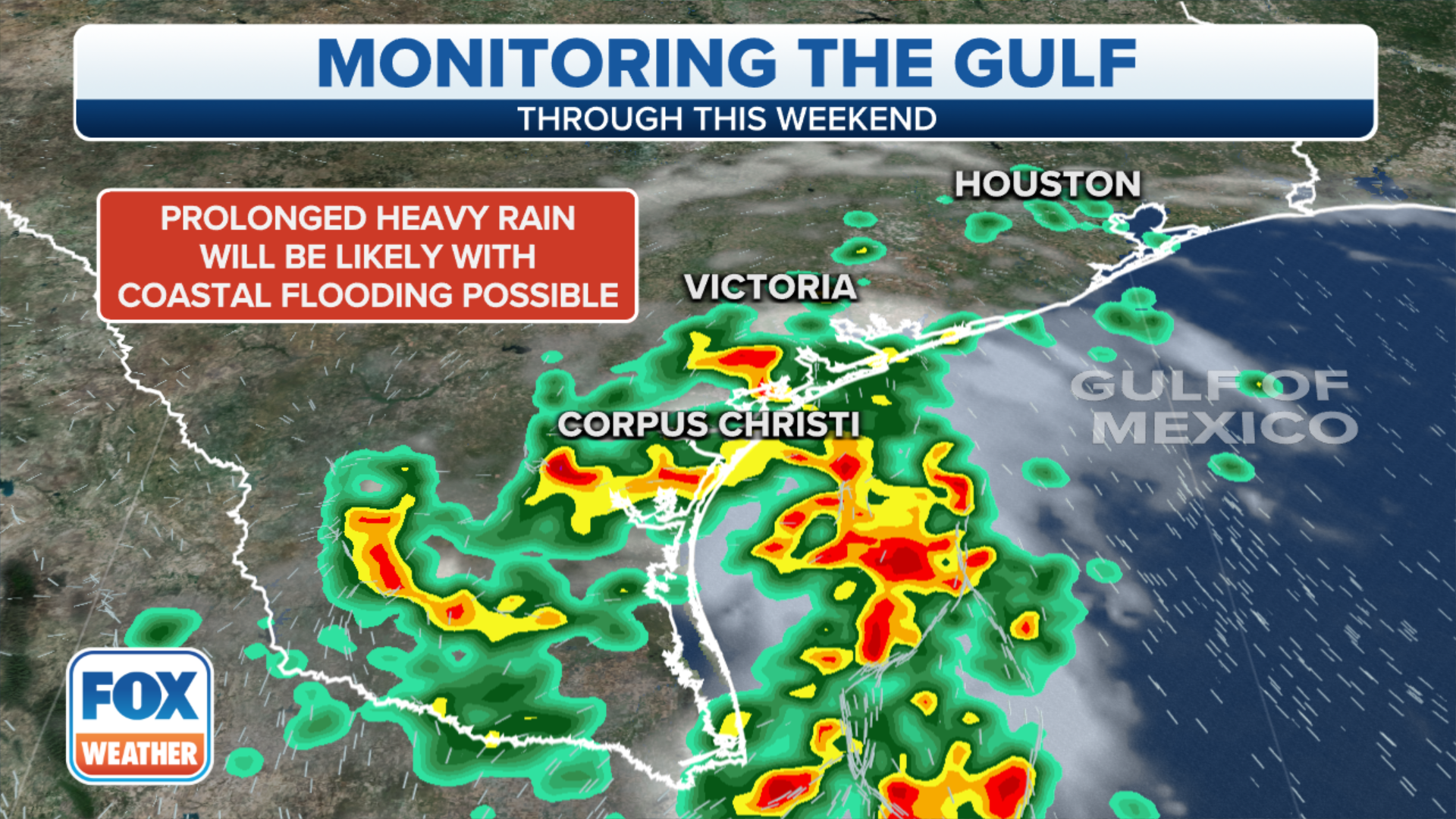 Monitoring the Gulf of Mexico

Relief from summer heat and drought

The Lone Star State has been the subject of a hot and dry summer, so the potential for heavy rains is a welcome relief.

Ninety-six percent of the state is experiencing drought conditions that range from abnormally dry to exceptional. 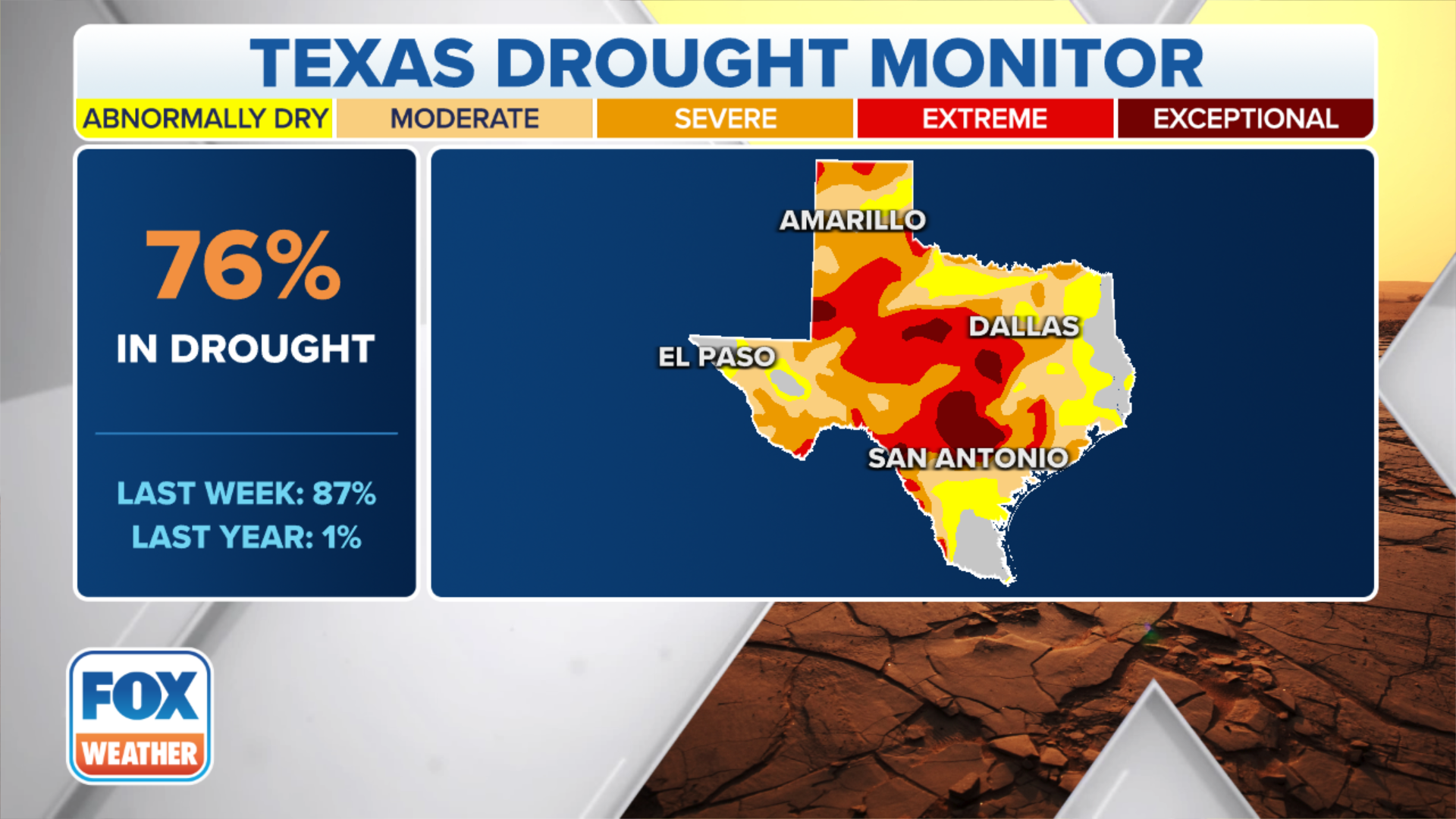 Cities such as Dallas, Houston and San Antonio report seeing less than half the amount of rain they typically receive during the summer months.

The Space City is more than half a foot of rain in the hole since the start of summer.

The combination of a front and a tropical disturbance will produce some relief for Texas, but it will not likely solve not end the drought. 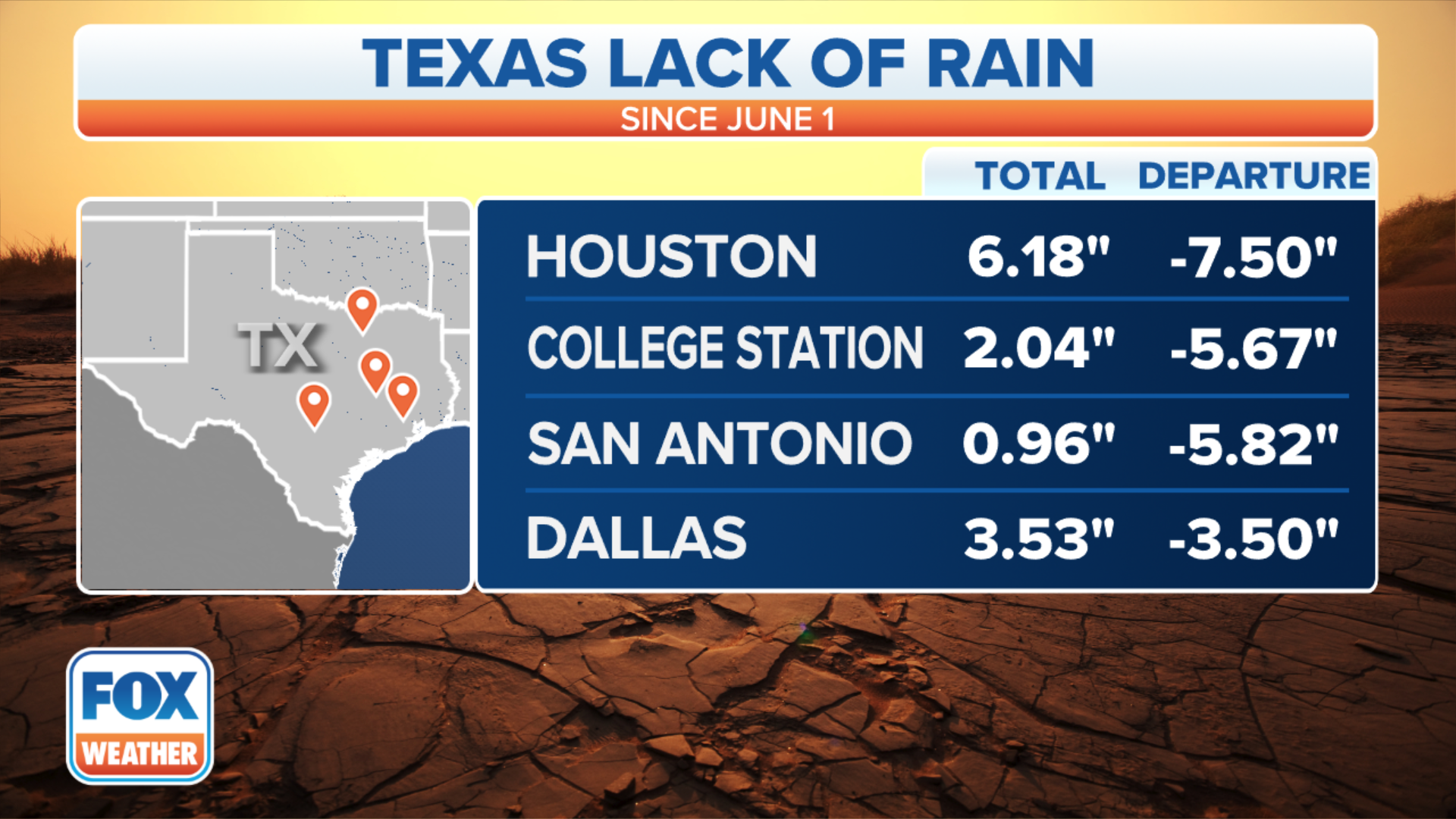