Drivers swim to safety from cars in flash flooding

Watch video of drivers swimming from their cars, quickly sinking in floodwaters at an underpass. Then, FOX Weather's Robert Ray was reporter turned rescuer when he carried a woman to safety.

Drivers swam from their vans, news reporters saved a woman from her sinking car, and taillights seem underwater in the middle of an intersection. These were just a few of the scenes that played out Monday after storms dropped over a foot of water on the Dallas-Fort Worth Metro area.

Even police cars couldn't escape the flooding in time.

"You're seeing the shot of water all the way to the overpass, but they're actually cars caught under that water," storm chaser Brandon Clement told FOX Weather of the video above. "And then some people had to be rescued, and they were really struggling to get people out. The water was coming so quickly."

Rescuers took to boats in nearby Mesquite to take stranded drivers to safety.

The Fort Worth Fire Department got over 500 calls for help and responded to 174 high water calls rescues since 10 p.m. Sunday. They were on the scene of 38 separate flood emergencies at one point midday Monday.

The National Weather Service warned, "Additional flash flooding in the immediate Dallas-Fort Worth metro area may result in life-threatening flash flooding this morning."

Drivers maneuver through flooded streets in Forth Worth, Texas

Drivers decided to maneuver through flooded streets in Forth Worth, Texas late Sunday night.

Dallas resident Kirshae Green was stuck on an overpass for almost three hours after dropping her daughter off at school. She said she was terrified and couldn't believe the vast number of ambulances attending to the flooding. In her Facebook post, she said she saw rescuers rappelling down the overpass to save drivers trapped in the water.

Fort Worth flooding has drivers travel in feet of water

"I was on an overpass looking on the underpass, and there were 18-wheelers that went underwater," Greene told FOX Weather.

‘IT WAS REALLY BAD’: DALLAS MOTHER STRANDED IN FLOODWATER MINUTES AFTER DROPPING DAUGHTER OFF AT SCHOOL

Green took a picture of the  highway from the overpass. Look at the car roofs barely breaking through the water.

"Storm chaser Brandon Clement told FOX Weather and shared the video, "Incredible water rescue on Interstate 30 in downtown Dallas. Stranded passengers fight for their life on I-30 at I 75."

Drone footage of cars underwater on I-30

Storm chaser Brandon Clement told FOX Weather, "Incredible water rescue on Interstate 30 in downtown Dallas. Stranded passengers fight for their life on I-30 at I 75."

A judge declared a state of emergency for Dallas County before the rain even stopped falling. Judge Clay Jenkins also reported a 60-year-old woman did not survive the flooding.

Mesquite Fire-Rescue told FOX 4 - Dallas that her car was swept off a bridge. Crews found her remains in the car hours later after the water receeded.

Drought and flood extremes this summer

After two bone dry months that plunged 90% of Texas into extreme drought, Mother Nature opened the flood gates. Some cities reported over 15 inches of rain. 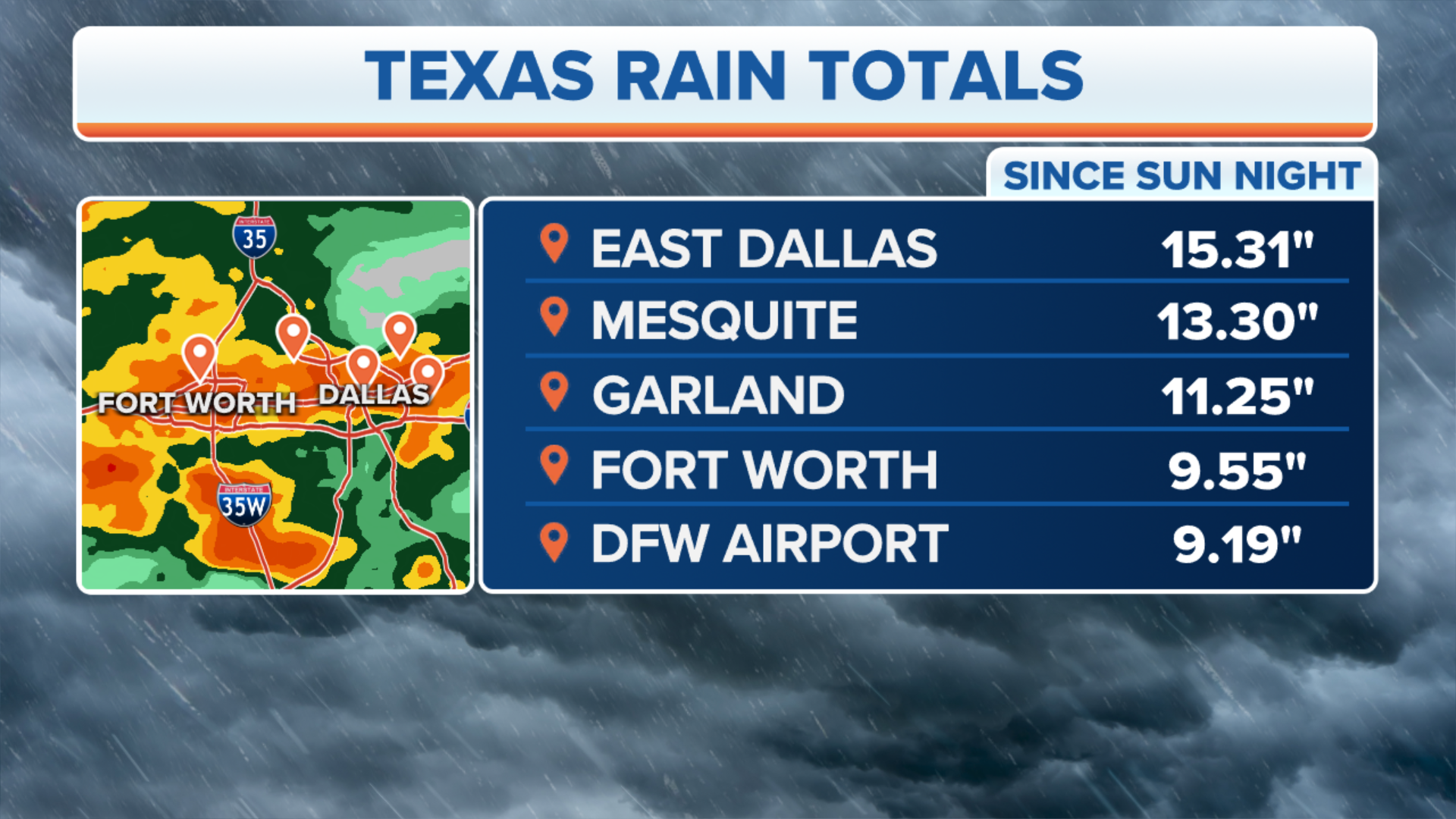 "That is a remarkable, remarkable amount for an area where we went more than two months without any rain. And so we're going from one extreme to the other," Tony Hartzell, spokesperson for the Texas DOT, told FOX Weather. "If we haven't had any rain, sometimes litter and other debris get into those drains, and then they'll pose a challenge for us."

Hartzell said litter clogged the drain, which flooded the intersection where FOX Weather's Robert Ray pulled a woman from her sinking car.

"Literally, the car was floating, and I started to pull the door open, and the water started to come in," Ray told the FOX 4 Dallas reporter who caught the rescue. "Then I realized I have to pull her out of the window, and that's the best case scenario at that point. She was panicking. Anyone would be."

‘I THOUGHT I WAS GOING TO DIE’: FOX WEATHER’S ROBERT RAY HELPS RESCUE WOMAN FROM SUBMERGED CAR IN DALLAS

Apartment floods with over 2 feet of murky water in East Dallas, TX

Video shows an apartment flooded with over 2 feet of murky water in East Dallas, Texas.

Residents got their first view of the vast flooding as the sun rose. A passenger took video of waves lapping on the Belt Line and into driveways and homes.

Another Fort Worth resident could only watch as five feet of water rose up and over cars in the area.

Even the Dallas Zoo had to take a rain day. They tweeted that the animals are all safe, but their walkways are underwater.

As the storm that triggered the rains moves east, Dallas-Fort Worth cleans up. Hard to believe after seeing these images, but Monday's rain total will not even be a record amount for a day for the airport. The greatest amount of rain that fell in 24 hours was 9.57 inches in September 1932. Dallas-Fort Worth International Airport reported 9.18 inches Monday.

Meteorologist Steve Bender explains the meteorological set up that created the flooding across Dallas.