FOX Weather’s Katie Byrne says crews predict it will take days to restore power in Broome County, New York after a late-season winter storms dumps more than a foot of snow in the town of Binghamton.

BINGHAMTON, N.Y. – Thousands of people in New York were still without power Wednesday after a nor’easter dumped heavy snow on a large part of the state Tuesday.

Radar estimates show the heaviest snow fell in a swath from the Binghamton area in the south to near the Lake Placid area in the north. Some of the highest snowfall reports were near Binghamton, where as much as 15 inches of snow has fallen to the northeast of the city.

Broome County, where Binghamton is located, also seemed to have the highest number of power outages being reported. According to poweroutage.us, more than 30,000 customers were without electricity. 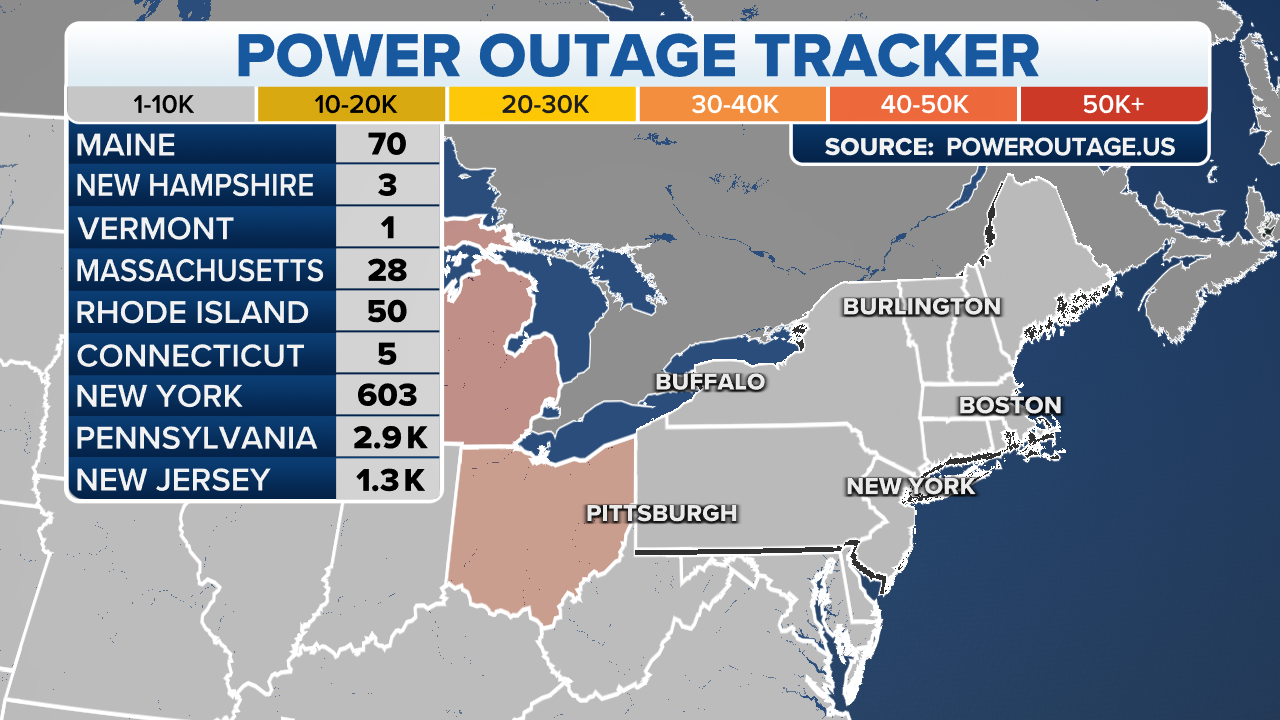 Jason Garnar, the executive of Broome County, said the heavy snow has brought down trees and power lines across the county.

"Trees everywhere," Garnar said during an interview with FOX Weather. "I mean, I was going over trees, under trees. It’s been like that throughout the whole county. That’s the biggest issue that we have is the trees."

Garnar said a state of emergency has been declared, and a travel ban is in effect until crews are able to clear felled trees from roads.

"We have one town that has no services at all, in the eastern part of the county," he said. "No electricity, no cell access. They’re under a boil water alert, state of emergency, travel ban – the whole nine yards."

'I've never seen this before': Half of Broome County residents without power

Garnar said crews with chainsaws have been dispatched across the county, but both the travel ban and power outages will last at least a couple of days.

Satellite video from the National Oceanic and Atmospheric Administration shows the path of a powerful nor’easter that delivered heavy rain and snow to parts of the eastern United States since Monday.

Garnar said Broome County is no stranger to extreme weather, but this storm feels a bit different.

"We’re pretty much prepared for everything, but I have to say, that it was kind of surprising to see a storm like this right after Easter. It’s not something you typically see around here."

New York Gov. Kathy Hochul said the town of Deposit, in neighboring Deleware County, has also been hit hard by the winter storm.

"They have been without power, also without 911 and emergency services," Hochul said during a news conference Tuesday. "So, the state of New York literally sent our own command center, our emergency operations mobile unit, to help in that community, to help them get through what is a very challenging time."

Hochul said that temperatures are not expected to be as cold as they would typically be after a winter storm, so she thinks most people without power will choose to shelter at home. She urged caution for people who are using alternative heating sources.

New York is not alone in feeling the effects of the winter storm. Pennsylvania had more than 20,000 customers without power Wednesday, according to poweroutage.us.