Dozens of records could break as heat wave grips Northeast

Temperatures on Thursday will reach the 90s to near 100 in the major metro areas. The humidity will make it feel like the triple-digits.

A dangerous heat wave is putting nearly 80 million Americans at risk of heat-related illnesses from the Plains to the Northeast as record-breaking temperatures are expected again on Thursday.

The National Weather Service has issued Heat Advisories in the central and southern Plains and from the mid-Atlantic to the Northeast and New England. 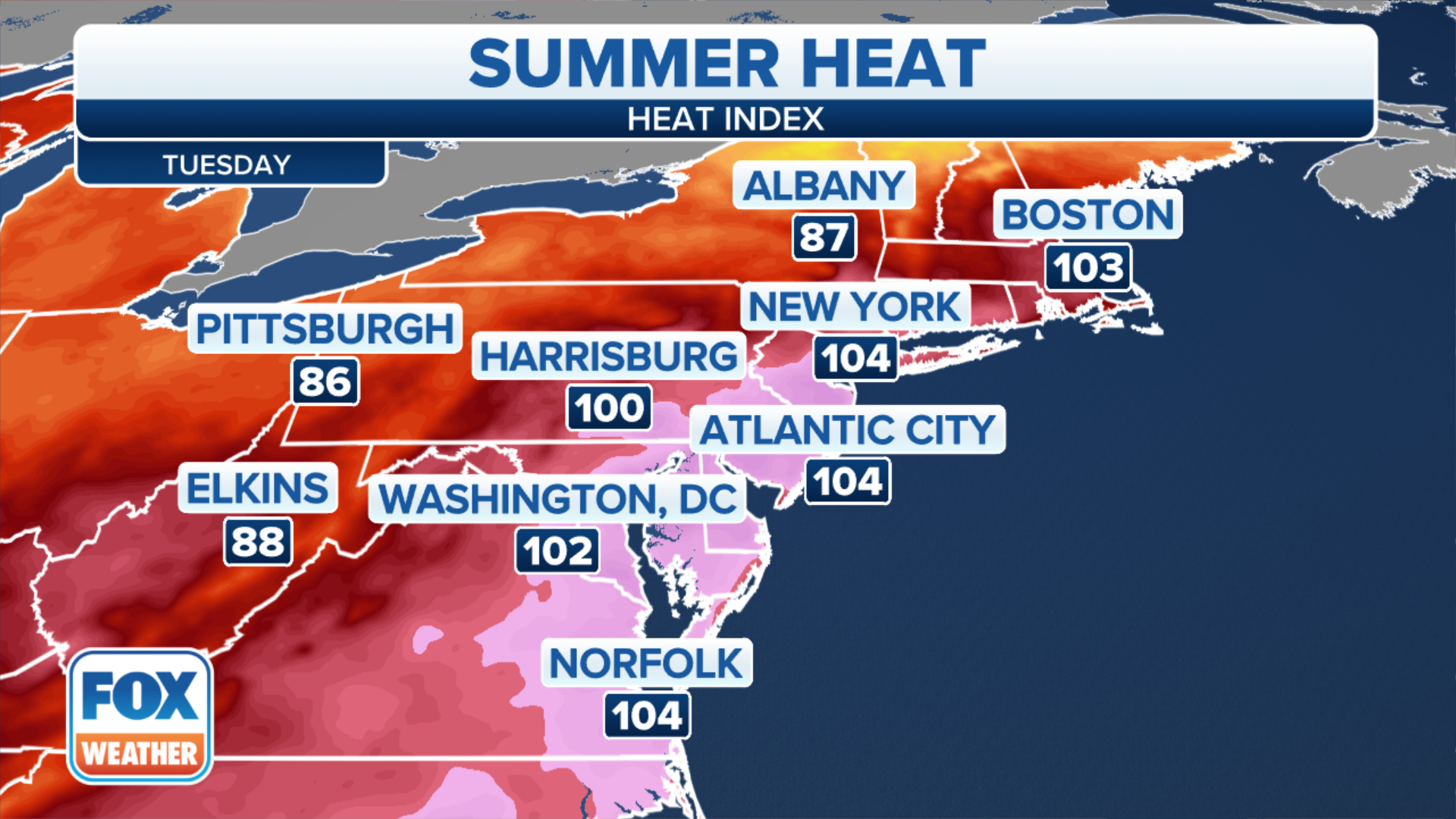 The "feels-like" temperature in the Northeast on Thursday, Aug. 4.
(FOX Weather)

"We didn't really cool down much overnight, and our air conditioners will be getting in a workout today," FOX Weather meteorologist Jane Minar said. "Heat index values, that's what it feels like when you step outside, especially getting into the afternoon – it is going to be hot."

The humidity will make it feel like it's 102 degrees in Washington and Harrisburg, Pennsylvania, on Thursday afternoon.

Scranton, Pennsylvania, and New York City will feel like it's about 98 degrees.

Boston will also feel the oppressive heat, as the feels-like temperature reaches nearly 100 degrees during the afternoon hours. 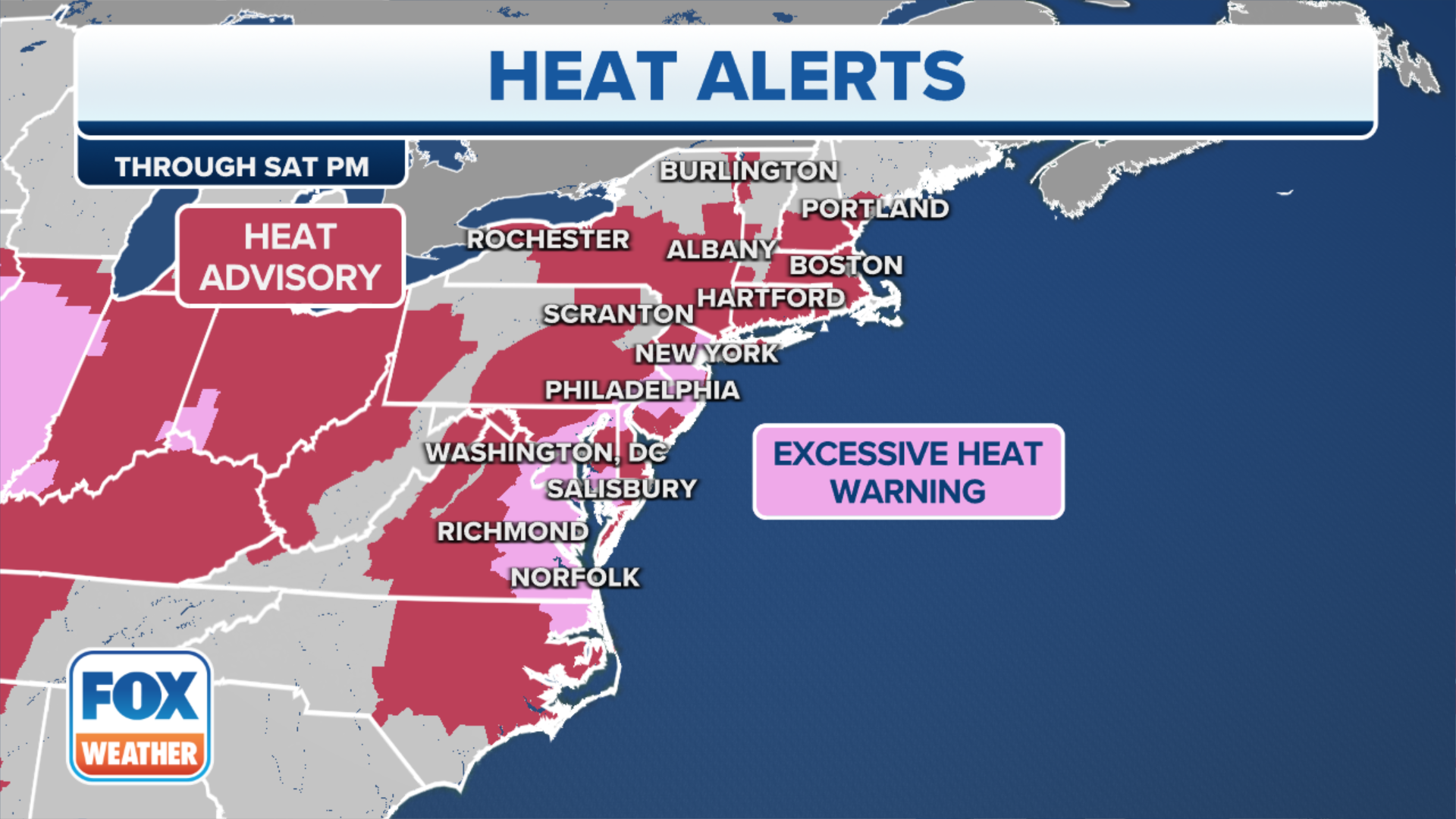 Heat Advisories are in effect across the mid-Atlantic, Northeast and New England.
(FOX Weather)

Because of the scorching temperatures and humidity, the National Weather Service has issued Heat Advisories across the Northeast Megalopolis from the Washington area through Philadelphia, New York City, Hartford in Connecticut, Providence in Rhode Island and Boston.

The Heat Advisories are also in effect across northern New England and interior New York state.

People living and working in places where a Heat Advisory is in effect should take proper precautions to prevent heat-related illnesses. 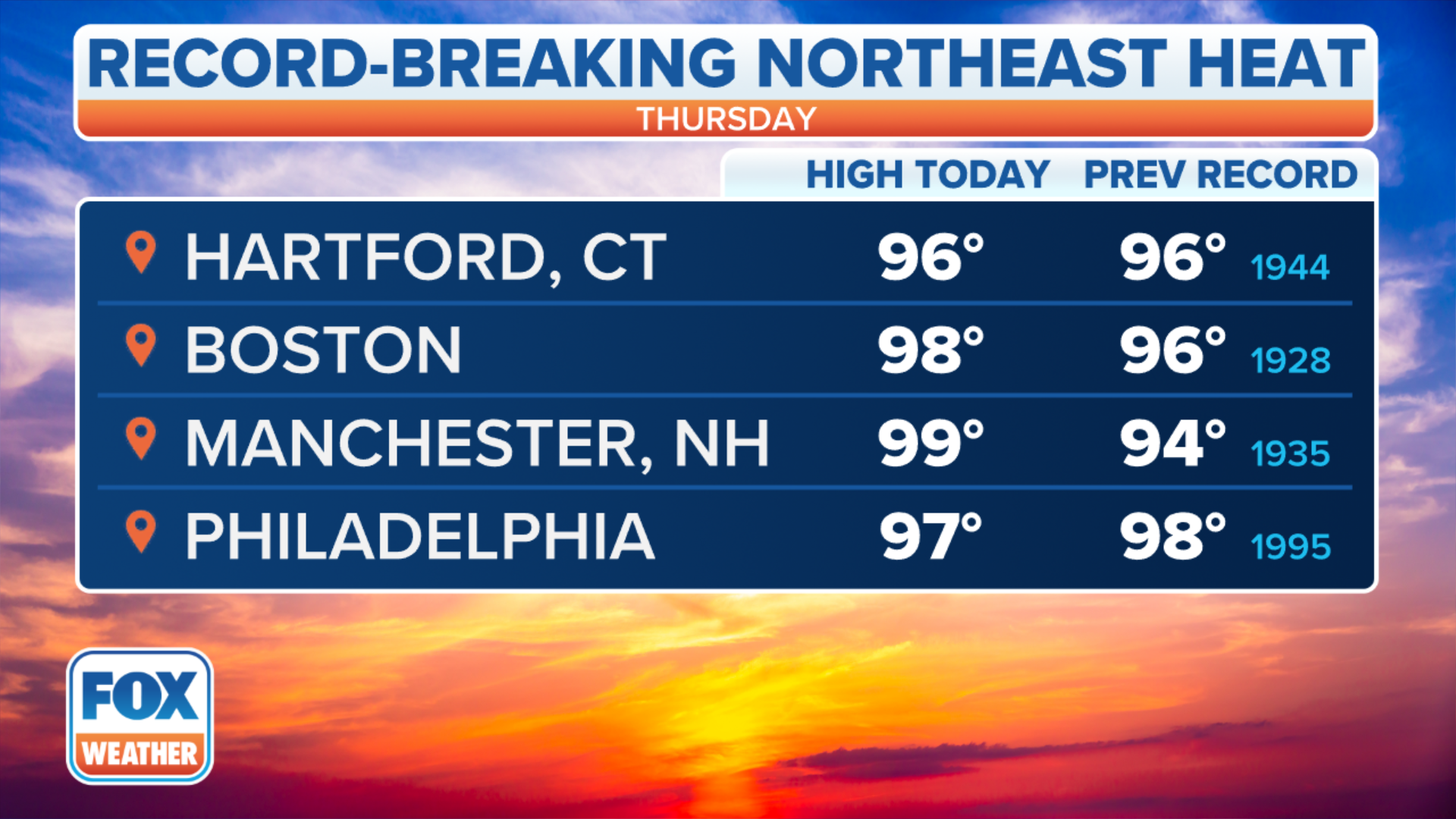 Record-high temperatures are expected in the Northeast and New England.
(FOX Weather)

The heat is also expected to break records across the region.

Hartford could break its old record of 96 degrees that was set in 1944. The high temperature in Hartford on Thursday is predicted to reach 97 degrees.

Boston could tie its old record of 96 degrees that was set in 1928.

Manchester, New Hampshire, could shatter its old record of 94 degrees set in 1935. The high temperatures in that area are expected to reach 97 degrees.

Albany, New York, could also tie its old record of 98 degrees on Thursday.

The heat and humidity will cause the feels-like temperatures to be in the triple-digits in the Southern Plains on Thursday.

"Make sure that you're really listening to your body," Minar said. "Take breaks, sit in the shade and don't overdo it because that's when we have the danger of really getting heatstroke and heat exhaustion."

The southern Plains will see dangerously hot temperatures on Thursday, and it will feel even hotter when you factor in the humidity. 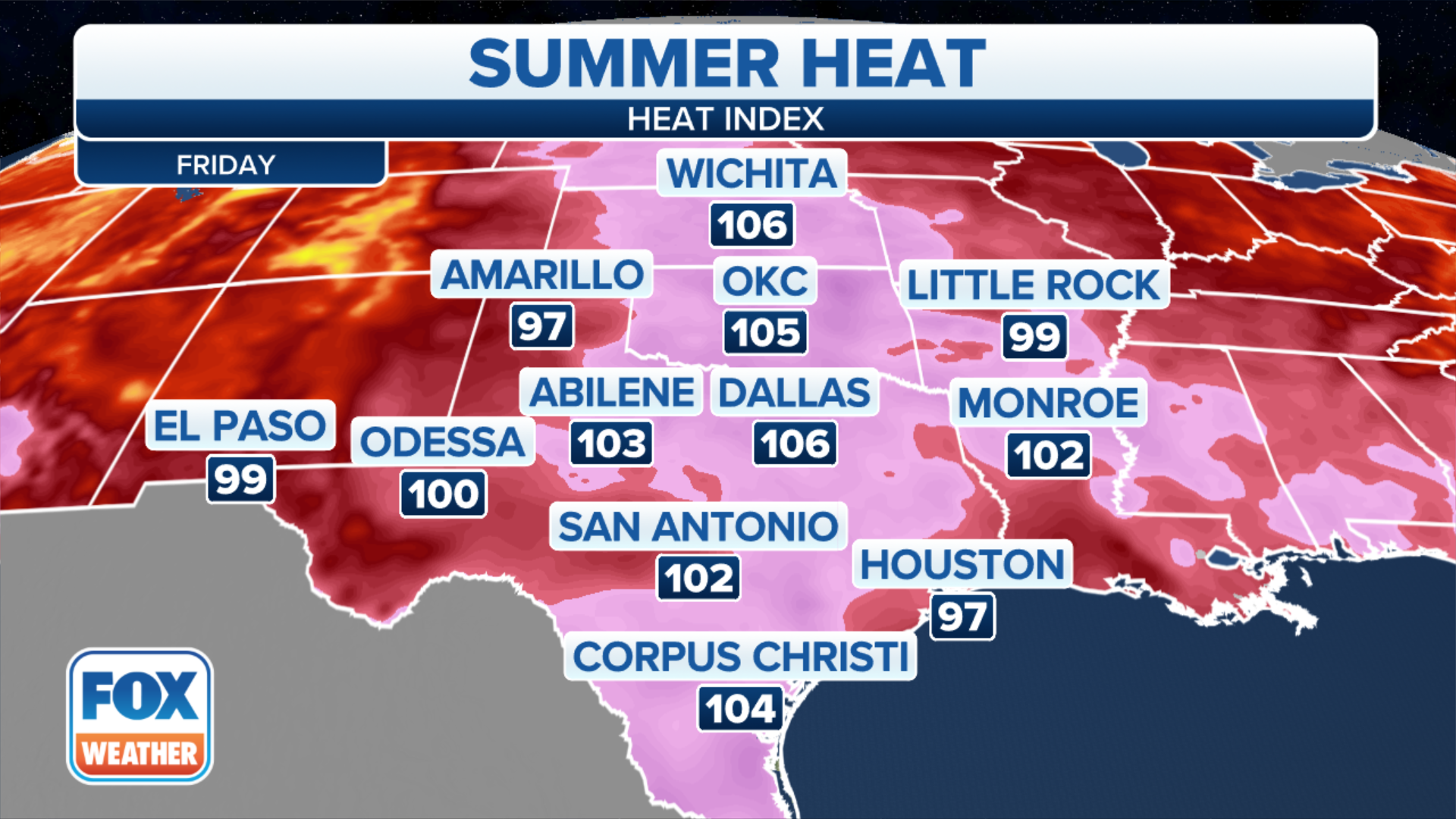 Triple-digit feels-like temperatures are expected from South Texas into the central Plains, with places like Dallas and San Antonio feeling like it's about 107 degrees. 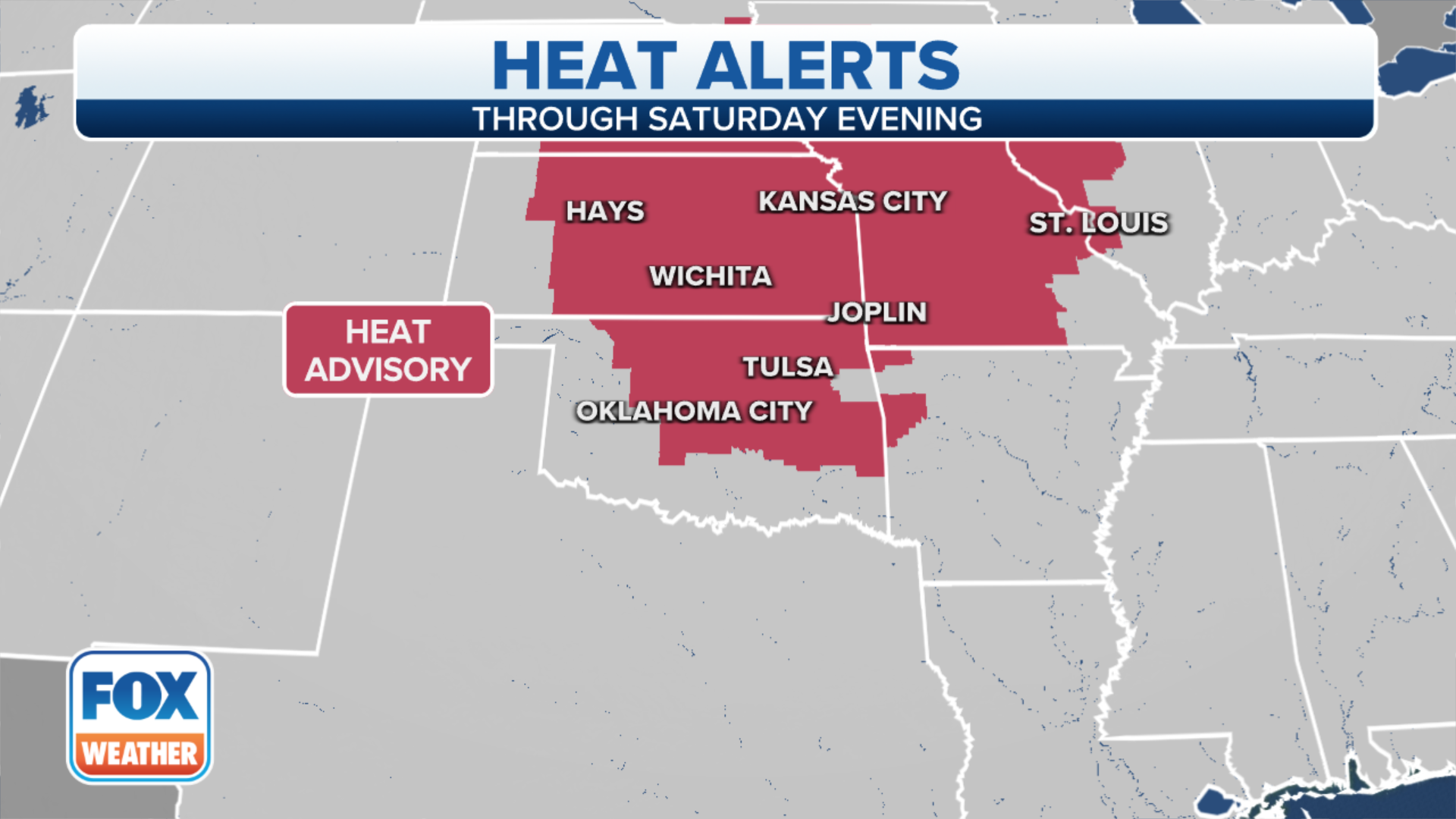 Heat Advisories are in effect in the central and southern Plains.
(FOX Weather)

Heat Advisories are in effect across the region from Texas to Kansas and eastward into the lower Mississippi Valley.

The Heat Advisories are in effect from San Antonio to Dallas, Oklahoma City and parts of south-central Kansas.

Aside from being uncomfortable, the hot weather could be dangerous, especially for those who do not have properly working air conditioning.

The Centers for Disease Control reports that more than 700 heat-related deaths occur annually in the United States, and extreme heat is the greatest weather-related killer.