More heavy rain and thunderstorms are expected across the Sunshine State on Sunday and lasting through the early part of the workweek.

Widespread showers and thunderstorms are expected to develop across Florida on Sunday, setting the stage for several inches of rain and flash flooding. 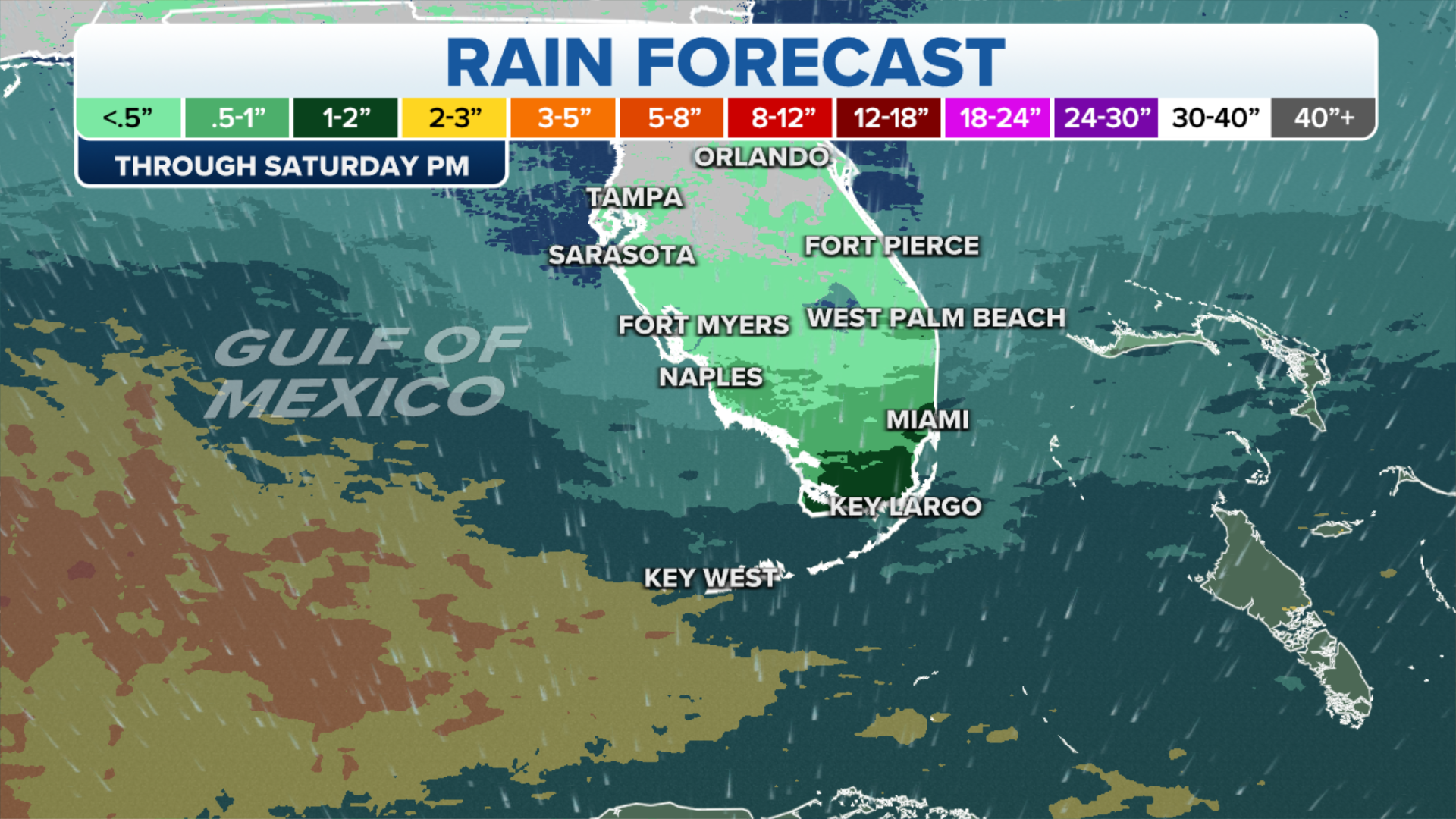 Several inches of rain could fall across Florida over the next several days.
(FOX Weather)

The Sunshine State will not be living up to its name, with most areas of Florida seeing an inch or two of rain. However, some areas of South Florida, like the Miami area, could pick up between 3-5 inches of rain with locally higher amounts.

Higher totals are also expected from the Tampa area on the west coast of the state up to Panama City.

The Jacksonville area could also see several inches of rain over the next few days.

The National Weather Service in Melbourne, Florida, said the main storm threats on Sunday would be torrential rain, cloud-to-ground lightning and winds gusting up to 40 mph.

"Torrential downpours are likely to produce rain totals of 2-4 inches, or a little higher in a few locations," the NWS said. "This will cause localized flooding of riads and other poorly drained urban and low lying areas."

WHAT IS A WATERSPOUT

There is also a chance for waterspouts to develop offshore in any of the stronger to severe thunderstorms that develop.

While many believe a waterspout is simply a tornado over water, this is only partially true. Depending on their formation, NOAA says waterspouts come in a couple of different types: tornadic and fair weather.

A tornadic waterspout typically begins as a true tornado that was spawned by a thunderstorm over land, which then moves out over the water and becomes a waterspout. Tornadic waterspouts may be quite large and can cause considerable damage to anything in their path.

TRIPLE THREAT: WATCH AS 3 WATERSPOUTS SWIRL OFF THE ALABAMA COAST 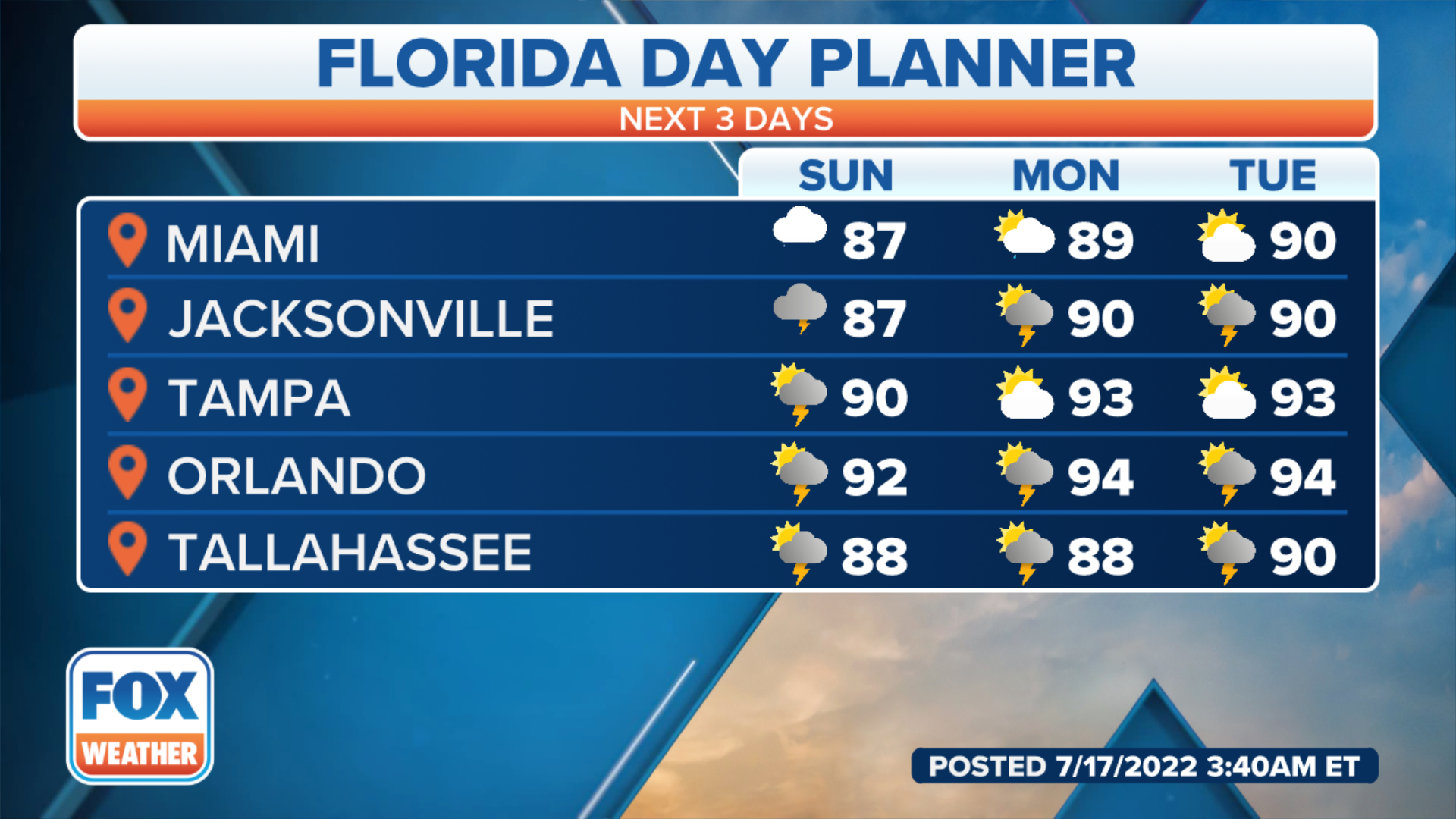 A closer look at the forecast for larger cities in Florida.
(FOX Weather)

Let's take a closer look at the forecast for some of the larger cities in Florida.

Temperatures will generally be in the upper 80s to low to mid-90s over the next several days from Miami through Orlando and Jacksonville.

It will be partly to mostly cloudy across the state, and that's because there is a chance for those stronger thunderstorms to roll through the region.

Tallahassee, Florida, will see thunderstorms from Sunday to Tuesday, with temperatures around 90 degrees. 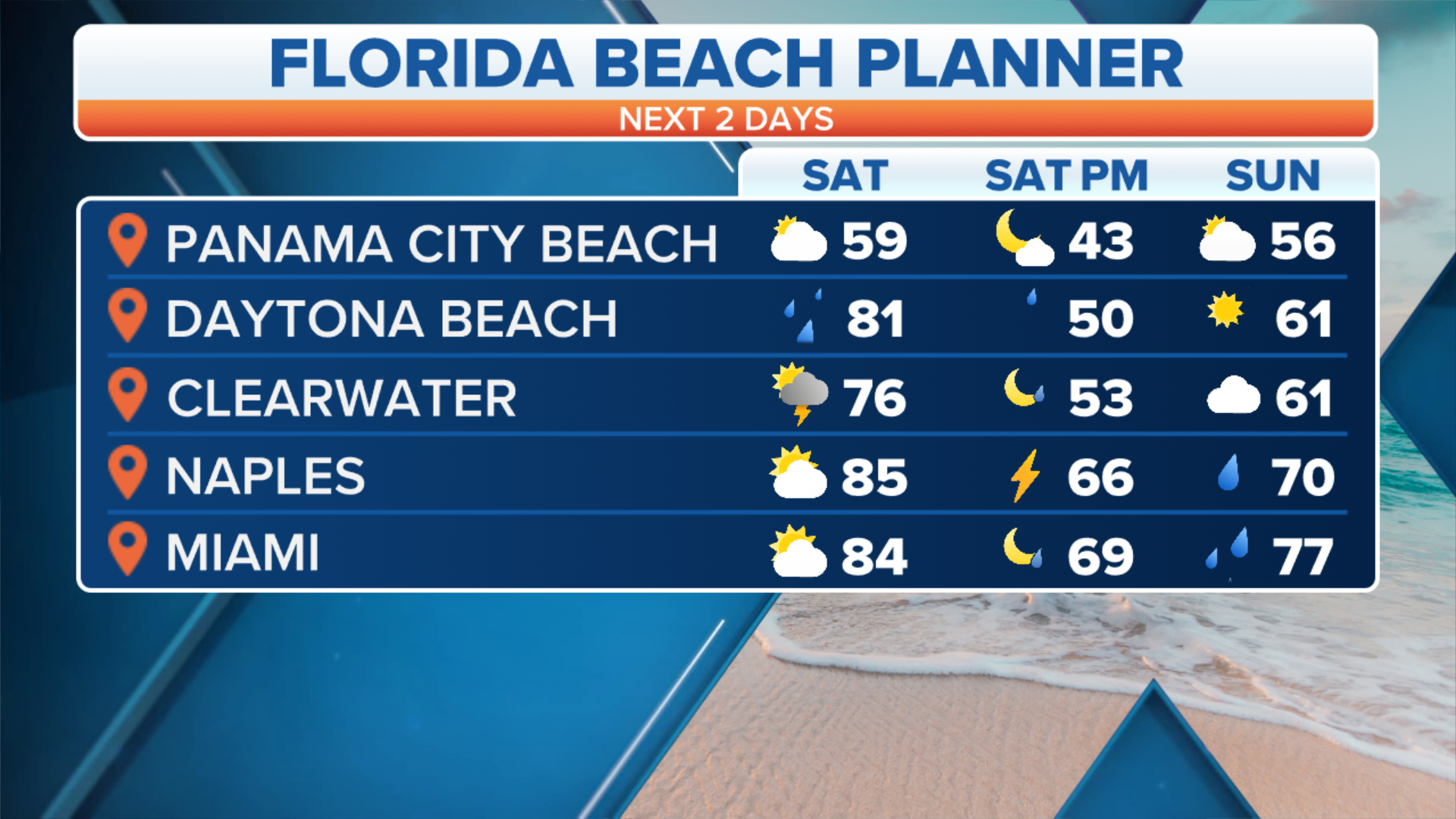 The beach forecast along the Florida coast is looking the same.

While temperatures will be quite warm, there's a high chance of seeing torrential rain and thunderstorms during the day from Sunday through Tuesday.

That means anyone in West Palm Beach, Vero Beach, Panama City Beach, Clearwater and Naples will need to keep an eye on the sky and take precautions to head indoors if strong to severe storms approach.