Early-season chill continues to engulf much of the U.S.

A southward progressing cold front will bring a reinforcing shot of arctic air into nearly the entirety of the U.S. this weekend.

Colder-than-average temperatures have gripped most of the U.S. the past several days, and the chill continues as some record-low temperatures are possible to close out the workweek – with a few places even dropping below zero.

Highs behind the front will dip even colder than earlier this week, nearly 15-25 degrees below average. This blast of arctic air could prevent high temperatures from going above freezing as far south as Texas.

"We're running 30 degrees below average for this time of year across the Colorado Plains and the panhandle of Texas," FOX Weather meteorologist Britta Merwin said. "Some of those afternoon highs that we're going to feel in the panhandle of Texas are colder. There are morning temperatures that would feel in the peak of winter. So this is really some bona fide bone-chilling air that's moving on through."

By Saturday, high temperatures will remain in the 30s and low 40s across the Ohio Valley and the Northeast. 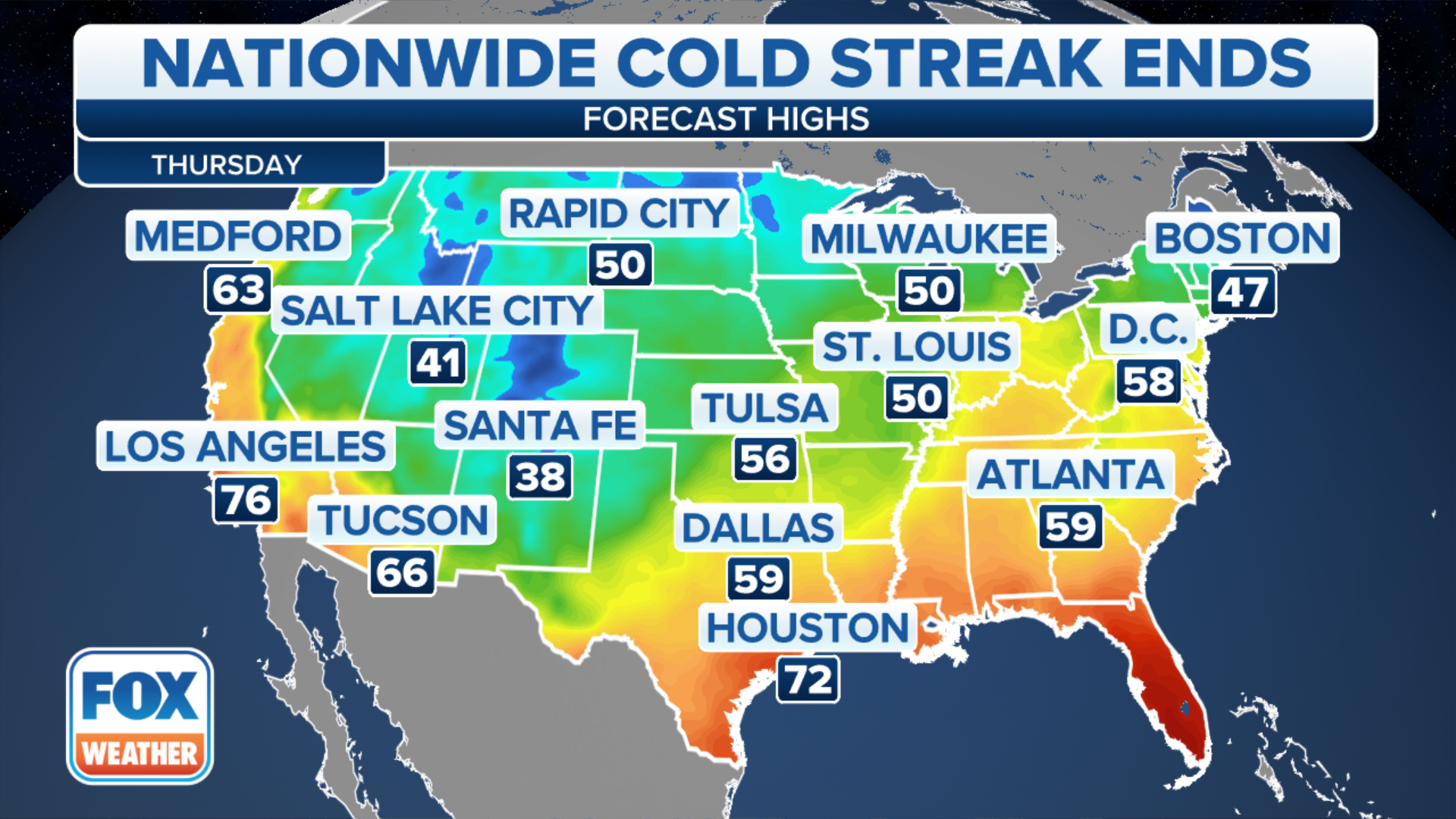 Temperatures are expected to be well below average for most of the country on Friday, November 18, 2022.
(FOX Weather)

Wind Chill Alerts were issued Thursday as arctic air continued to spill into the region. Overnight wind chills tonight dipped as low as 25 degrees below zero.

A few record lows were possible in Pocatello, Idaho, Casper, Wyoming, and Valentine, Nebraska, on Friday morning. Highs Friday will struggle to get out of the 10s and 20s due to gusty northeast winds. Temperatures are expected to return closer to normal on Sunday. 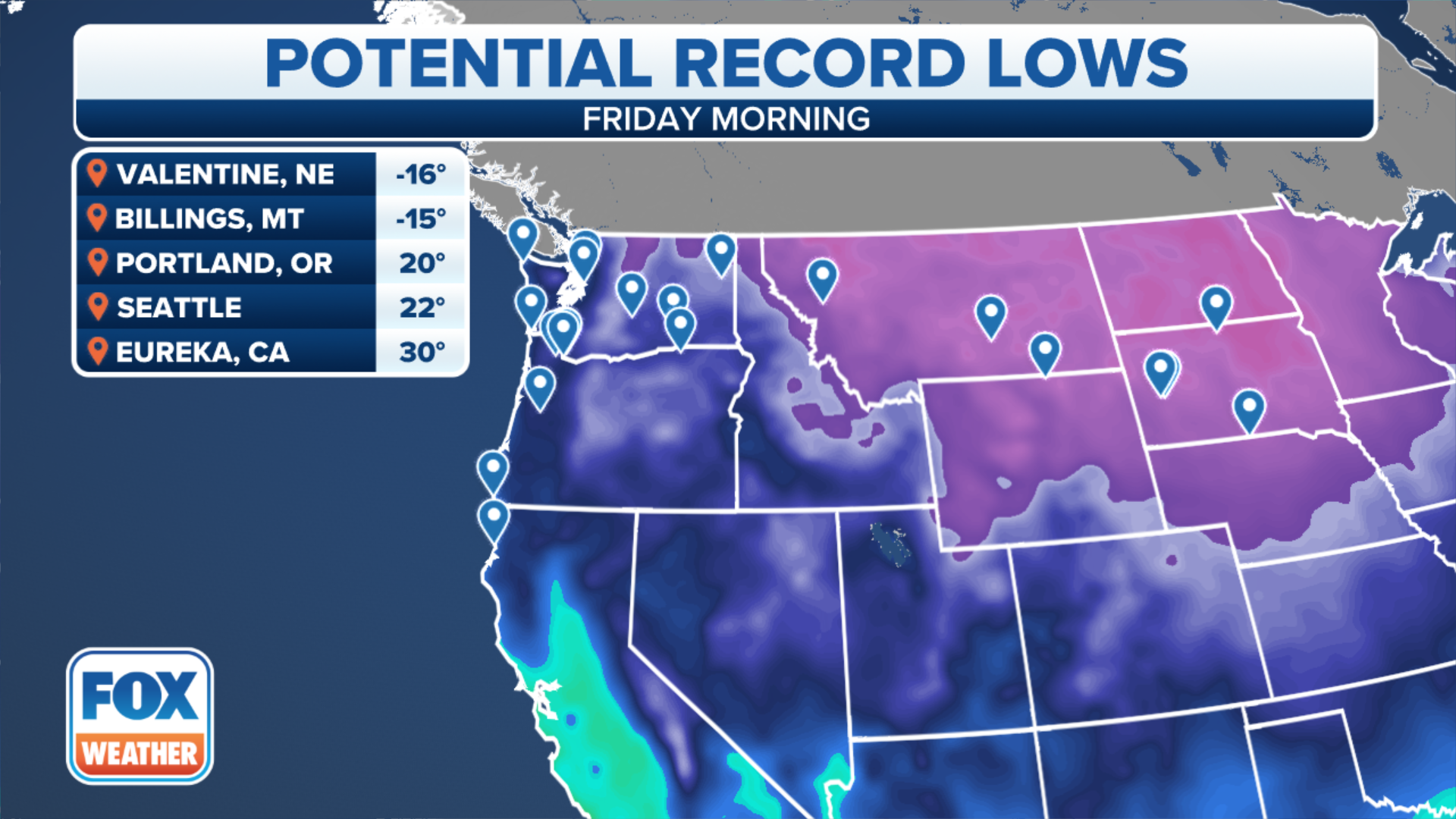 It's going to be a weather whiplash across the Lone Star State.

On Friday morning, the cold front will be right on the doorstep of North Texas, with light snow ongoing in the Texas Panhandle. This snow won't amount to much but could cause some minor travel issues for the morning commute.

The front will reach the Houston metro area by Saturday morning, sending temperatures dropping by 10 to 20 degrees. Saturday will be a cold and windy day as the cold air takes hold. Warmer conditions are expected to return. 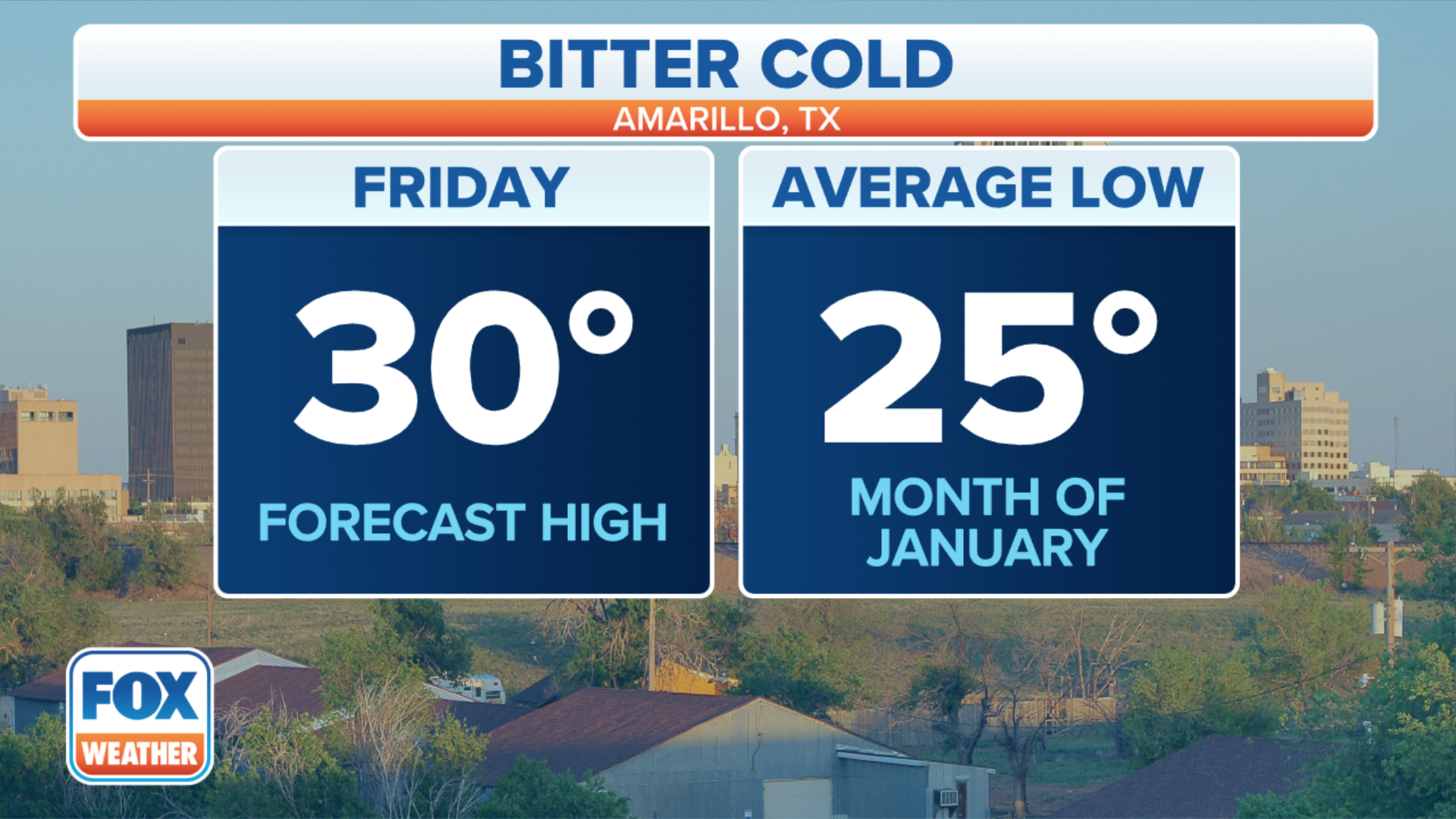 The high temperature in Amarillo, Texas, on Friday will be bitter cold.
(FOX Weather)

Frost and freeze alerts have been issued Friday morning as chilly air has settled in behind a cold front that moved through Wednesday as low will dip well below freezing.

The next front will move through the region Friday night into Saturday before stalling out over Florida, leading once again to a weekend of split temperatures across the state with cooler conditions in the north and warm conditions in the southern half. 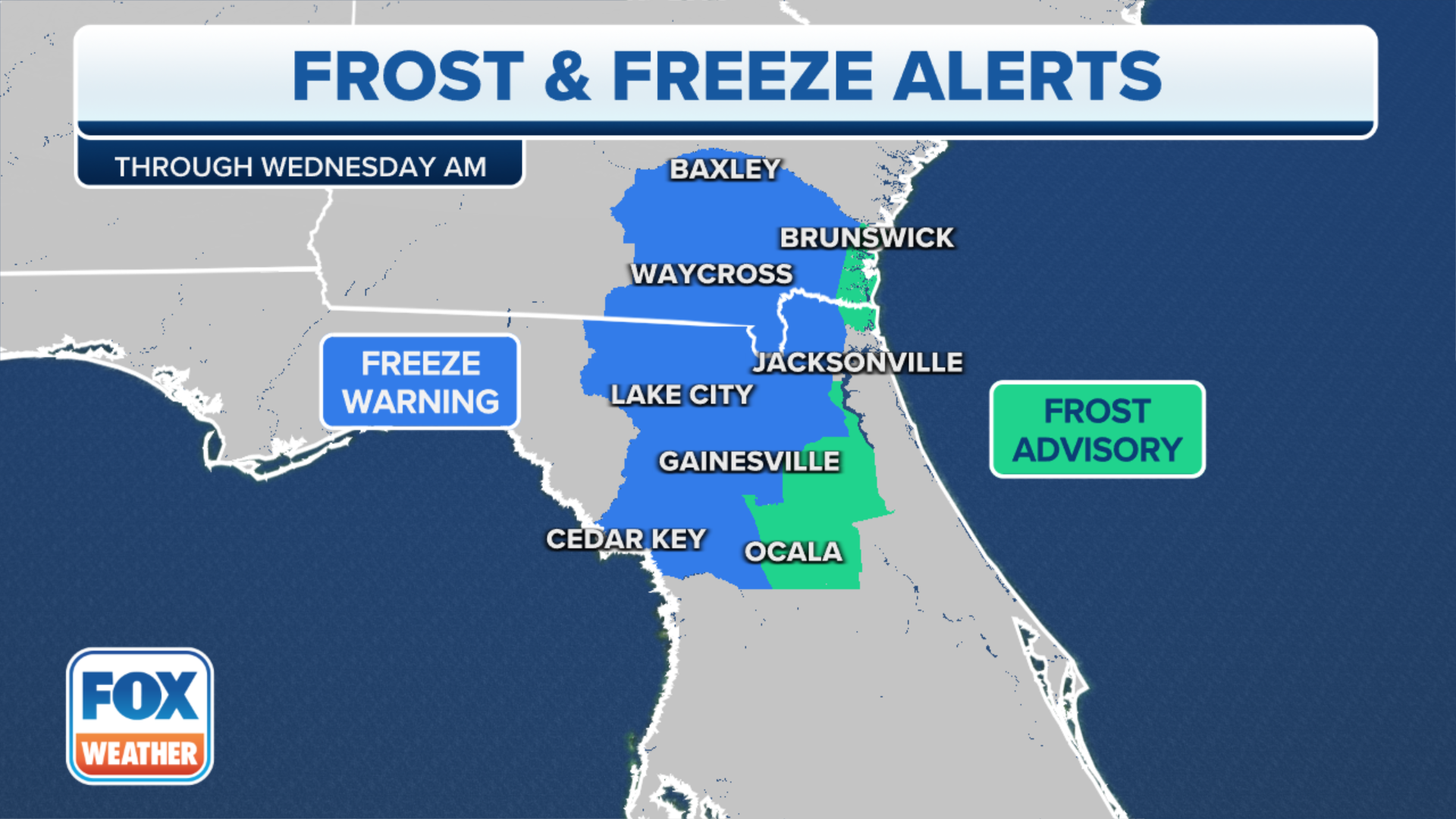 Here's a look at frost and freeze alerts issued in the Southeast.
(FOX Weather)

The front will move through the Northeast and Ohio Valley on Friday, and reach the Atlantic Ocean by Friday night.

This will send temperatures on a downward trend, but not as dramatic as previous cold fronts this season.

The most noticeable difference will be during the day Saturday and Sunday, as gusty winds will prevent temperatures from warming very much. Temperatures are expected to return closer to average early next week. 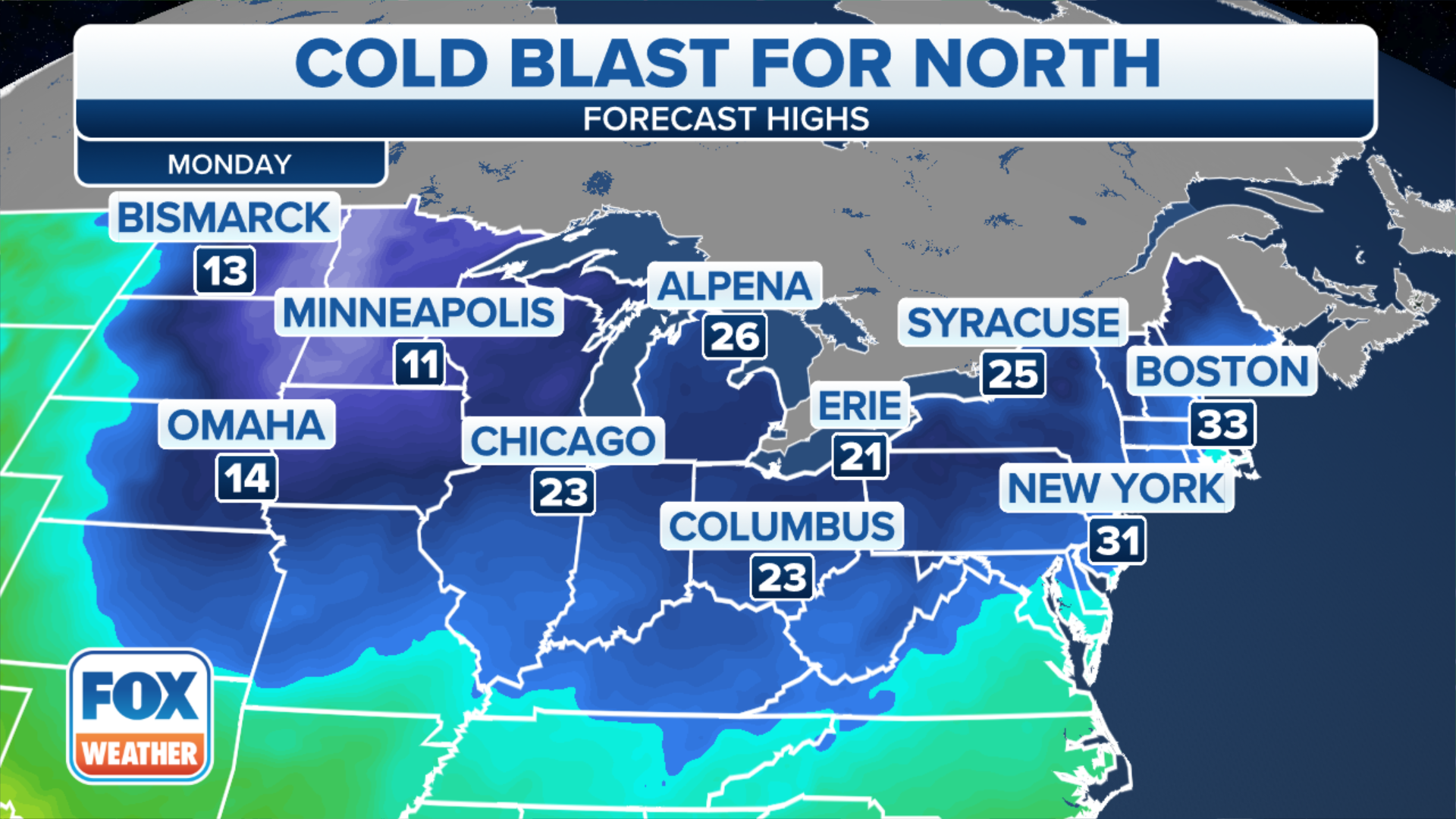