A late-week storm will bring snow from the Rockies and Plains to the mid-South and interior Northeast, in addition to spreading severe thunderstorms and heavy rain across the Southeast.

A late-week winter storm will bring snow from the Rockies and Plains to the mid-South, then intensify into a "bomb cyclone" as it tracks up the East Coast with snow and high winds by this weekend.

As a strong upper-level jet stream plunges out of the West on Friday, it will spawn the development of a surface low-pressure system along a cold front in the lower Mississippi Valley. That low will then rapidly strengthen as it tracks toward the Northeast through Saturday.

Meteorologists use the term bomb cyclone to describe a low-pressure system that undergoes "bombogenesis" – defined as a rapid pressure drop of at least 24 millibars in 24 hours or less – indicative of a very intense storm system.

WHEN STORMS ‘BOMB OUT’: EXPLAINING HOW A BOMB CYCLONE FORMS 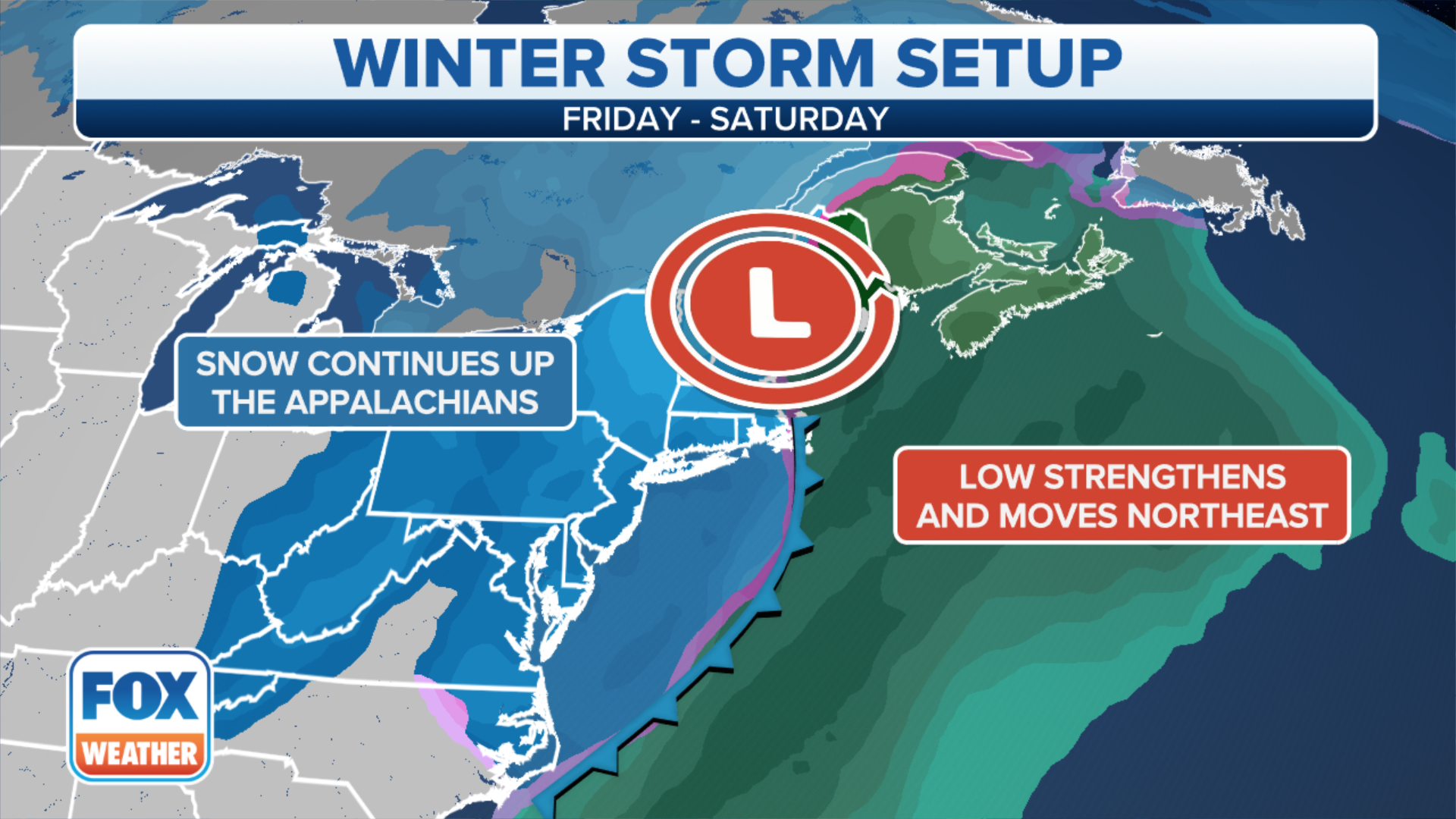 Here's our current outlook for this storm's snow, severe weather and flash flooding threats. Be sure to download the FOX Weather app for the latest forecast and weather alerts for your exact location, plus our channel's 24/7 livestream.

Ahead of the late-week storm, a round of snow will blanket parts of the Rockies, Plains and Midwest through Thursday.

The National Weather Service has issued Winter Storm Warnings and Winter Weather Advisories for portions of those regions.

The Kansas City, Missouri, metro area is under a Winter Storm Warning, while the Denver metro area is included in the Winter Weather Advisories. 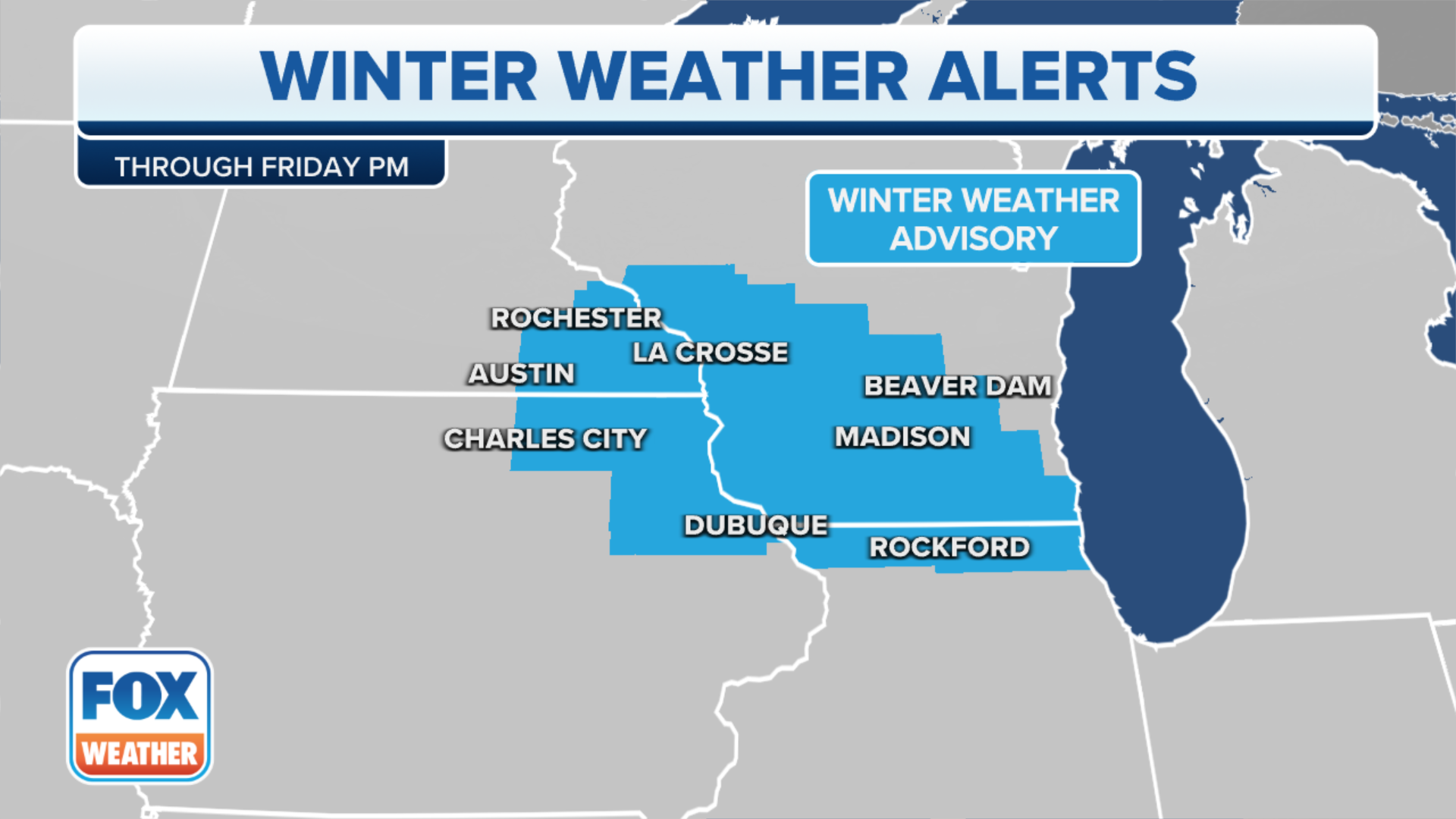 At least 6 inches of snow could pile up through Thursday from the Rockies into parts of southern Nebraska, northern Kansas, southern Iowa and northern Missouri.

Kansas City and Denver are both forecast to pick up 3 to 6 inches of snow, which will likely result in slippery roads and low visibility at times. 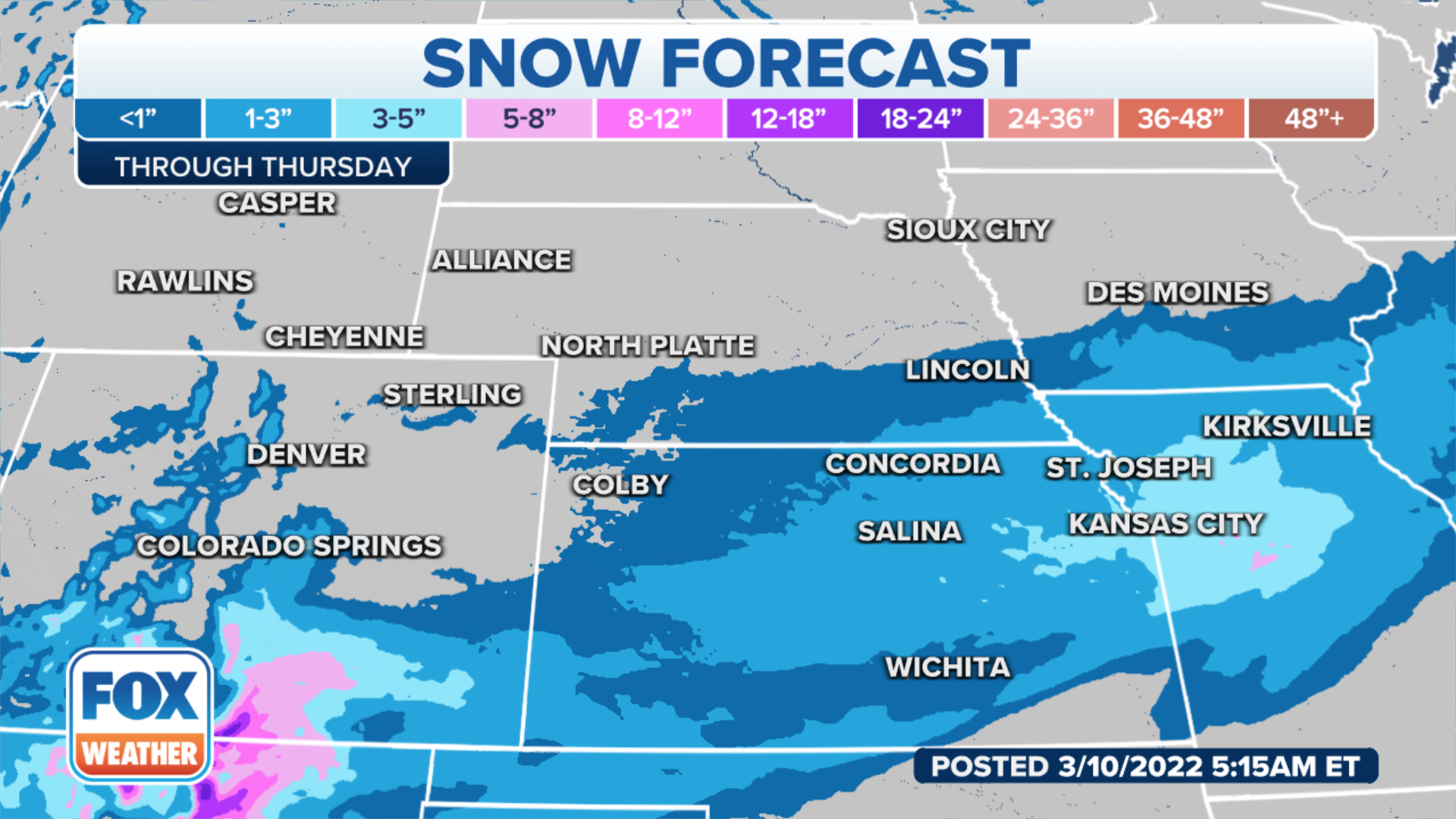 Snow could reach as far south as Oklahoma and the Texas Panhandle on Thursday night, but the snow will become more expansive on Friday as it spreads into the Ozarks and northeastward to the Great Lakes.

The Friday morning and/or evening commute could be slick in many of these areas.

BLAST OF ARCTIC AIR A REMINDER WINTER ISN'T OVER FOR THE ROCKIES, PLAINS 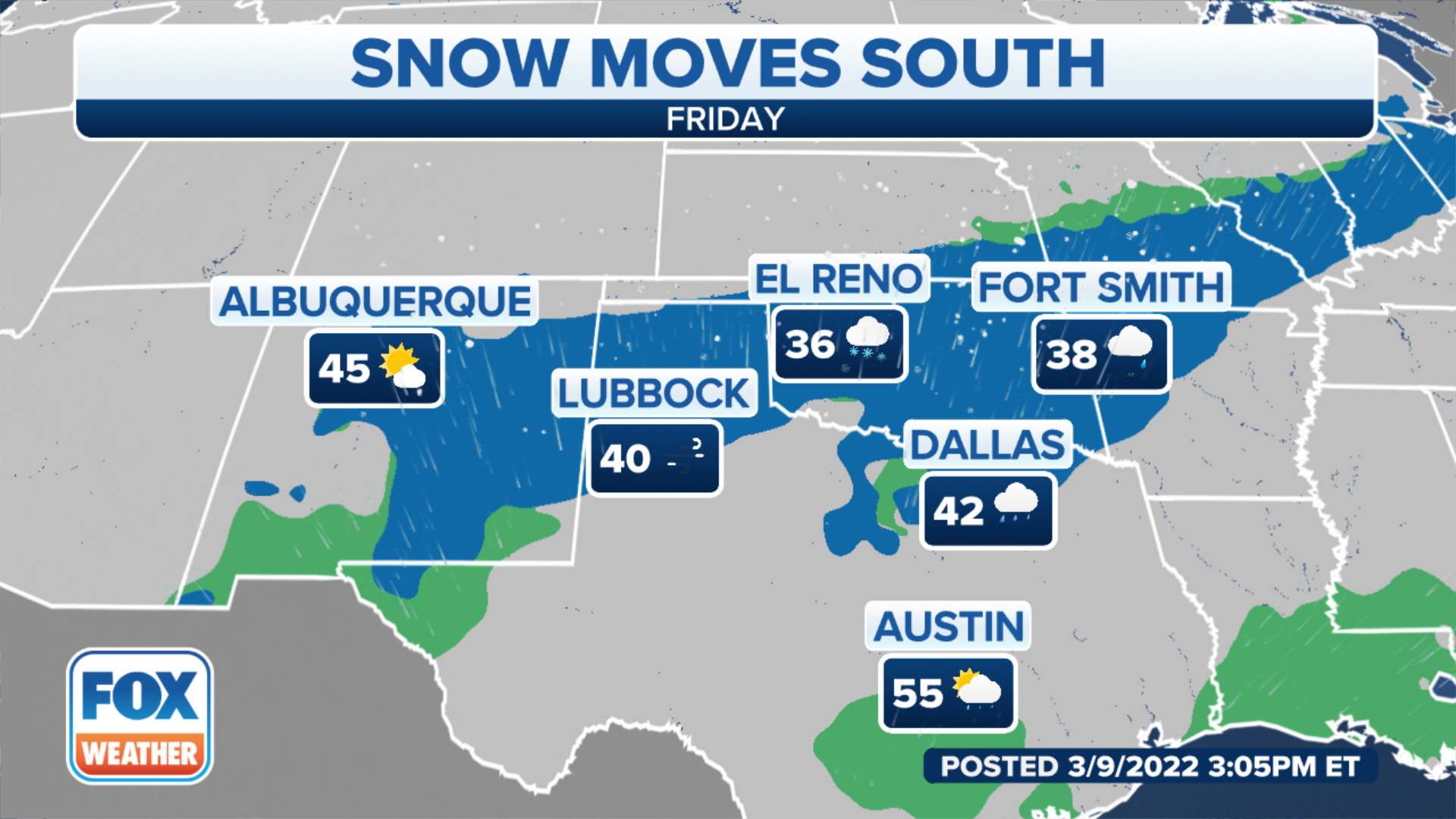 Rain could change to snow Friday night from portions of the interior Northeast to the Ohio and Tennessee valleys, including as far south as Arkansas, northern Mississippi, northern Alabama and northern Georgia.

Expect slippery roads in these regions as temperatures plunge below freezing overnight, leading to icy spots on any untreated roads.

Winds will also pick up Friday night from North Florida to parts of New England as the low-pressure system begins to strengthen near the East Coast. 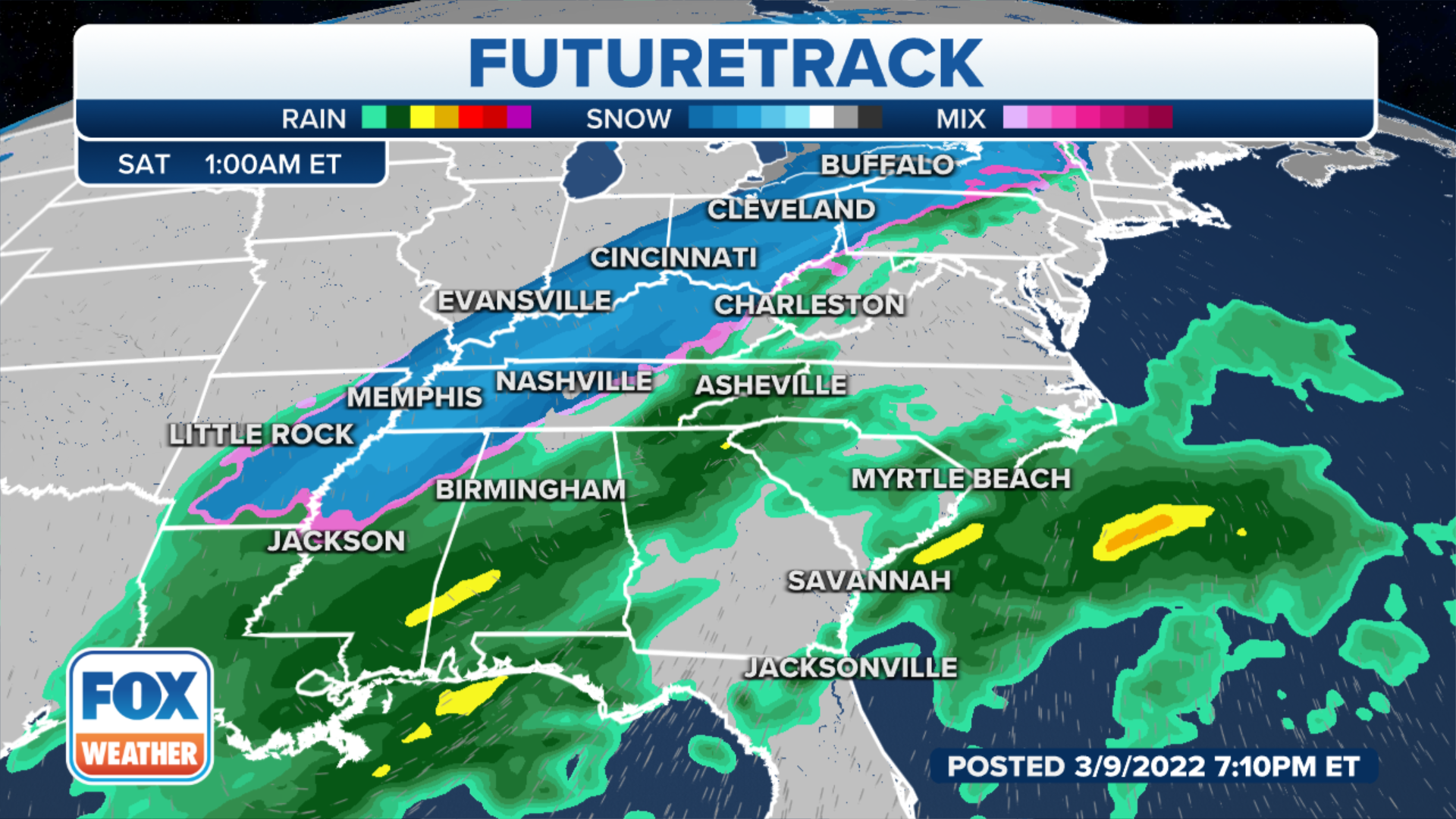 Snow is expected on Saturday from the Appalachians to portions of the Great Lakes, Pennsylvania, upstate New York and northern New England. Rain could also change to a brief period of snow later in the day along parts of the Interstate 95 corridor between New York City and Washington.

Strong winds are also likely across much of the eastern U.S. as the low-pressure system continues to intensify, with the highest gusts from the eastern Carolinas to the mid-Atlantic coast and New England. Downed trees and power outages are possible in those areas.

The snow will end from west to east on Saturday night, but slick roads could linger into Sunday morning across the Northeast with temperatures plunging below freezing. 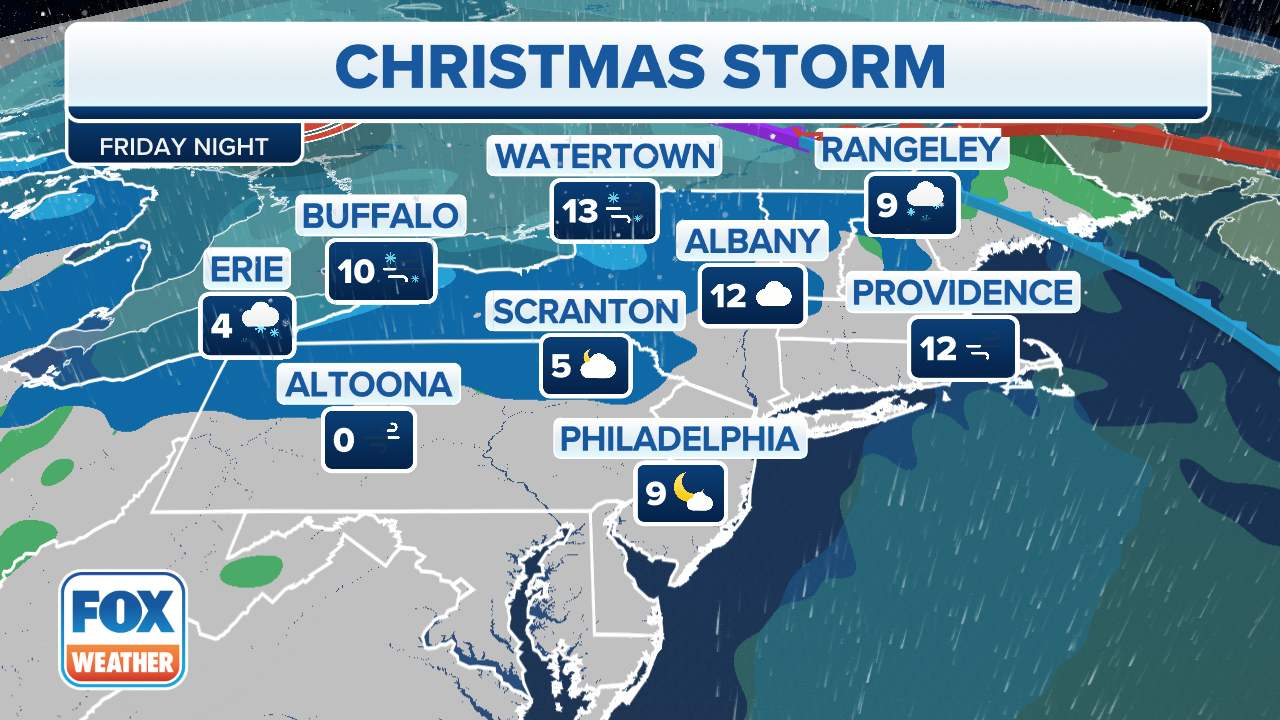 This storm is predicted to bring light to moderate snow amounts to most areas from the Southern Plains to the mid-South, Ohio Valley and interior Northeast. However, some heavier totals of more than 6 inches are possible in parts of the Appalachians, central and northern Pennsylvania, upstate New York and northern New England.

Regardless of the amount of snow, roads could still be slippery as far south as portions of Oklahoma, the Ozarks and the Tennessee Valley. 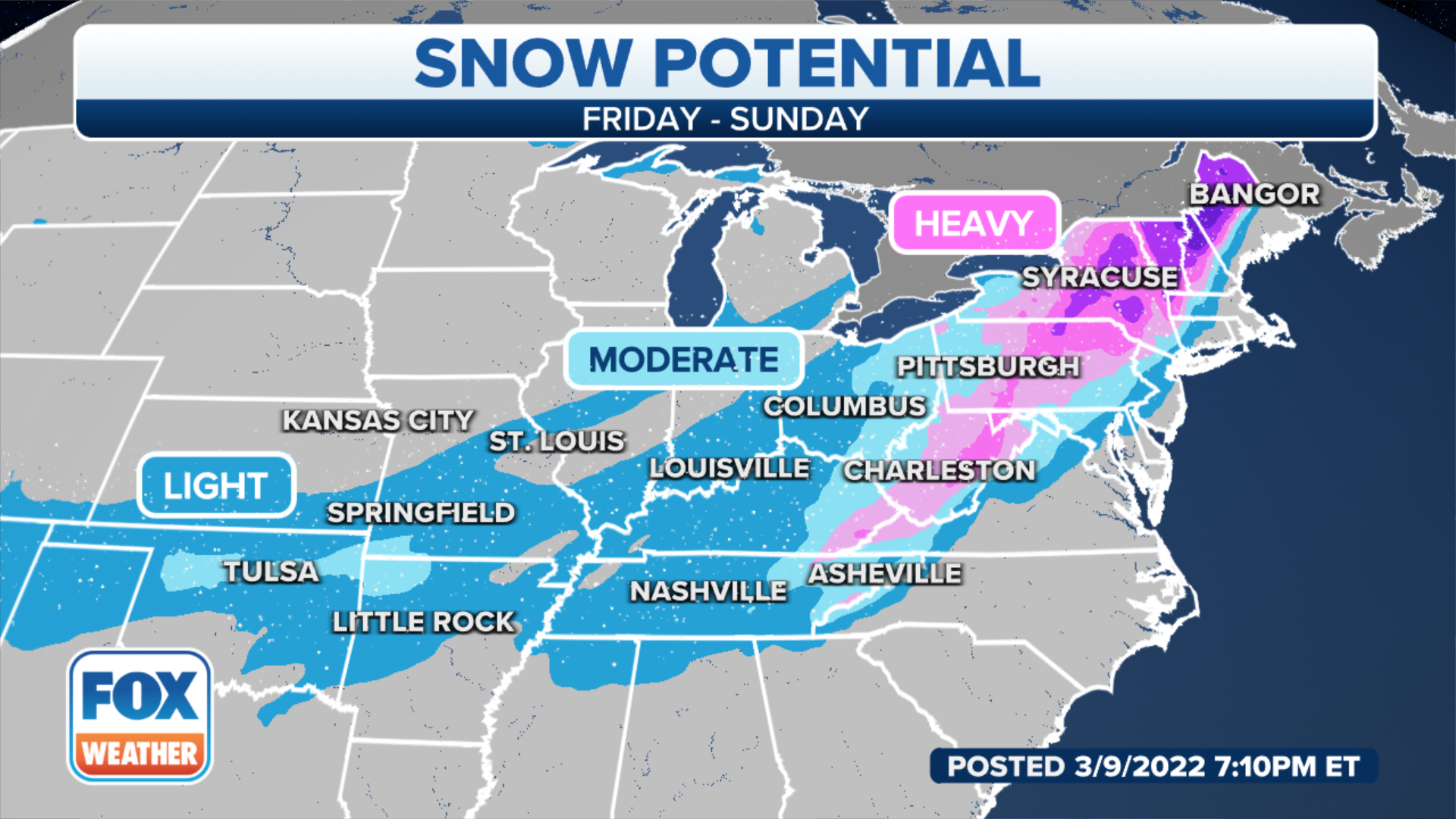 On the warm side of this storm system, severe thunderstorms and heavy rain are likely from the Gulf Coast to the Southeast coast, particularly Friday night into early Saturday.

Areas from southern Alabama to northern Florida, southern and central Georgia, central and eastern South Carolina and southeastern North Carolina will have the highest risk of severe weather during this time.

Damaging wind gusts and a few tornadoes are the main risks from any severe storms that develop. 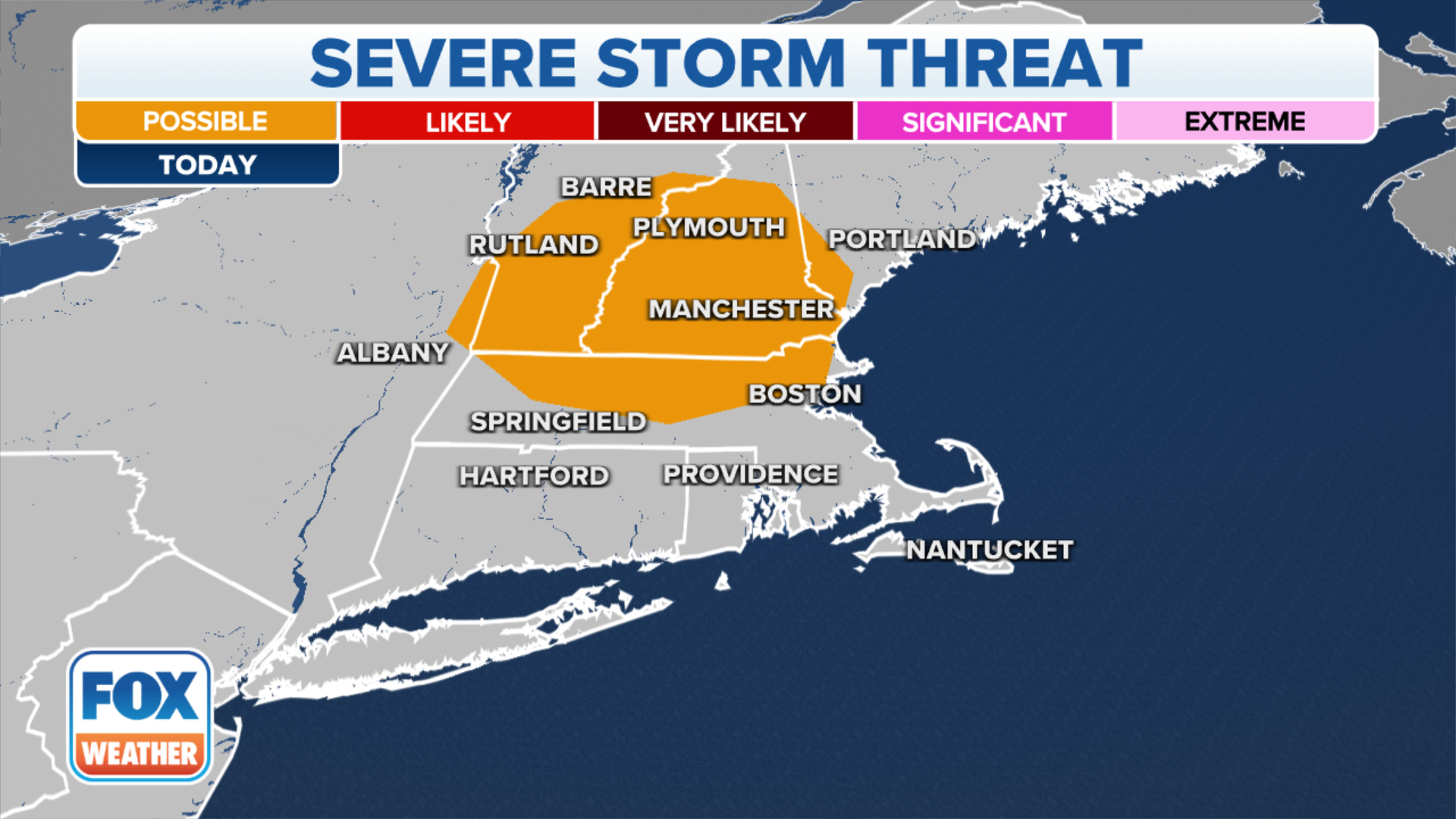 Strong to severe storms and areas of heavy rain could remain a threat in parts of the coastal Southeast on Saturday, mainly from portions of North Florida to coastal Georgia, the eastern Carolinas and the Virginia Tidewater.

The severe weather risk is expected to peak during the morning before the cold front moves off the Atlantic coast in the afternoon. 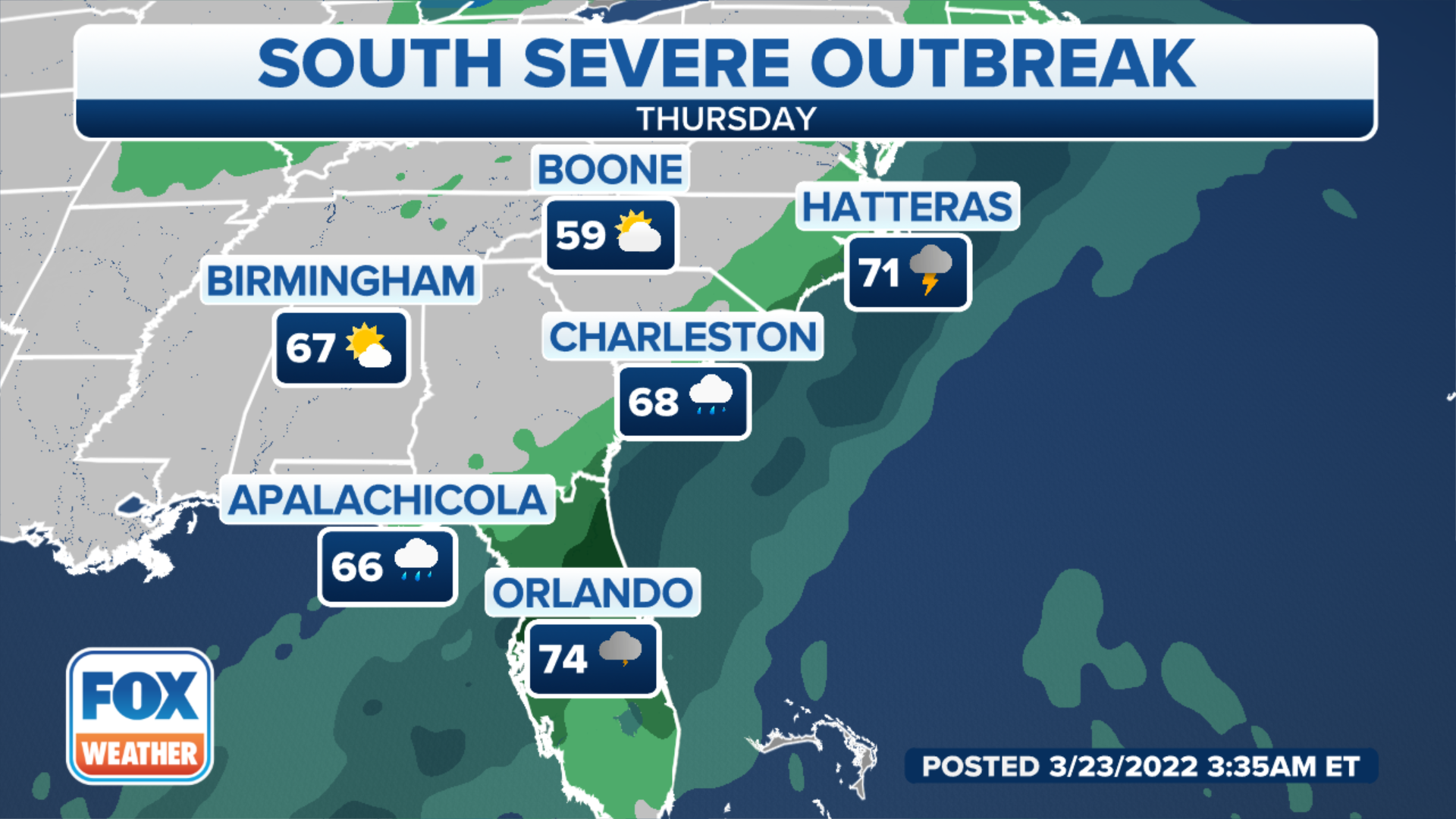 When combining rainfall from the showers and thunderstorms earlier in the week with the rain expected from the late-week storm, some places across the Southeast could see more than 3 inches of rain through Saturday.

The heaviest rain will likely be focused across portions of northern Florida, southern Georgia and southern South Carolina, where localized rainfall totals of 5-plus inches are not ruled out.

Flash flooding could develop in some of these areas that get in on the heaviest downpours in the days ahead. 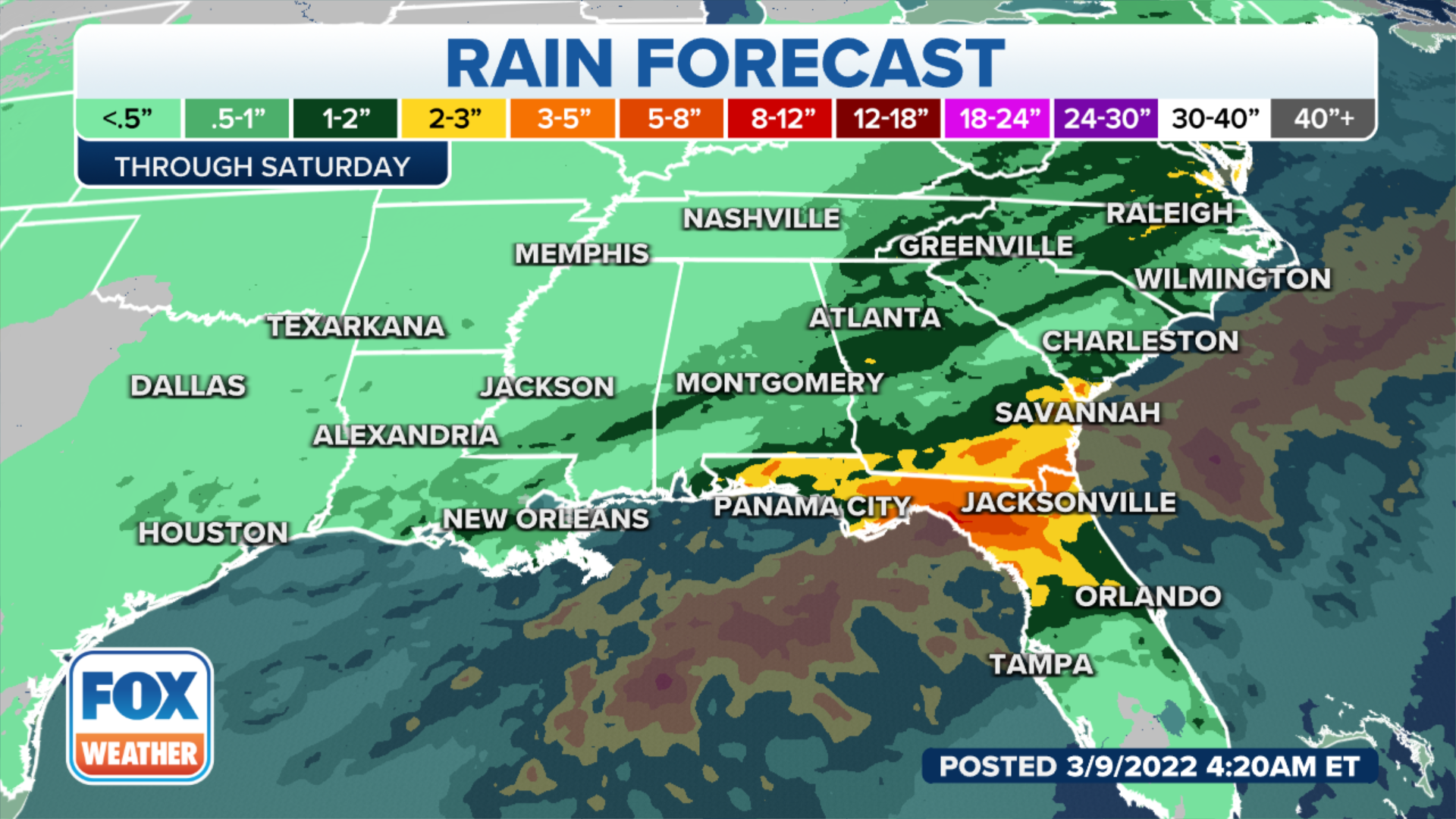