Flash Flood Watches are in effect across parts of the Pacific Northwest in advance of heavy rain and thunderstorms in the region on Sunday.

It will be a soggy Sunday across the Pacific Northwest as the region is expected to see heavy rain, which could lead to flash flooding.

In addition to the heavy rain, some strong to severe thunderstorms are also possible. 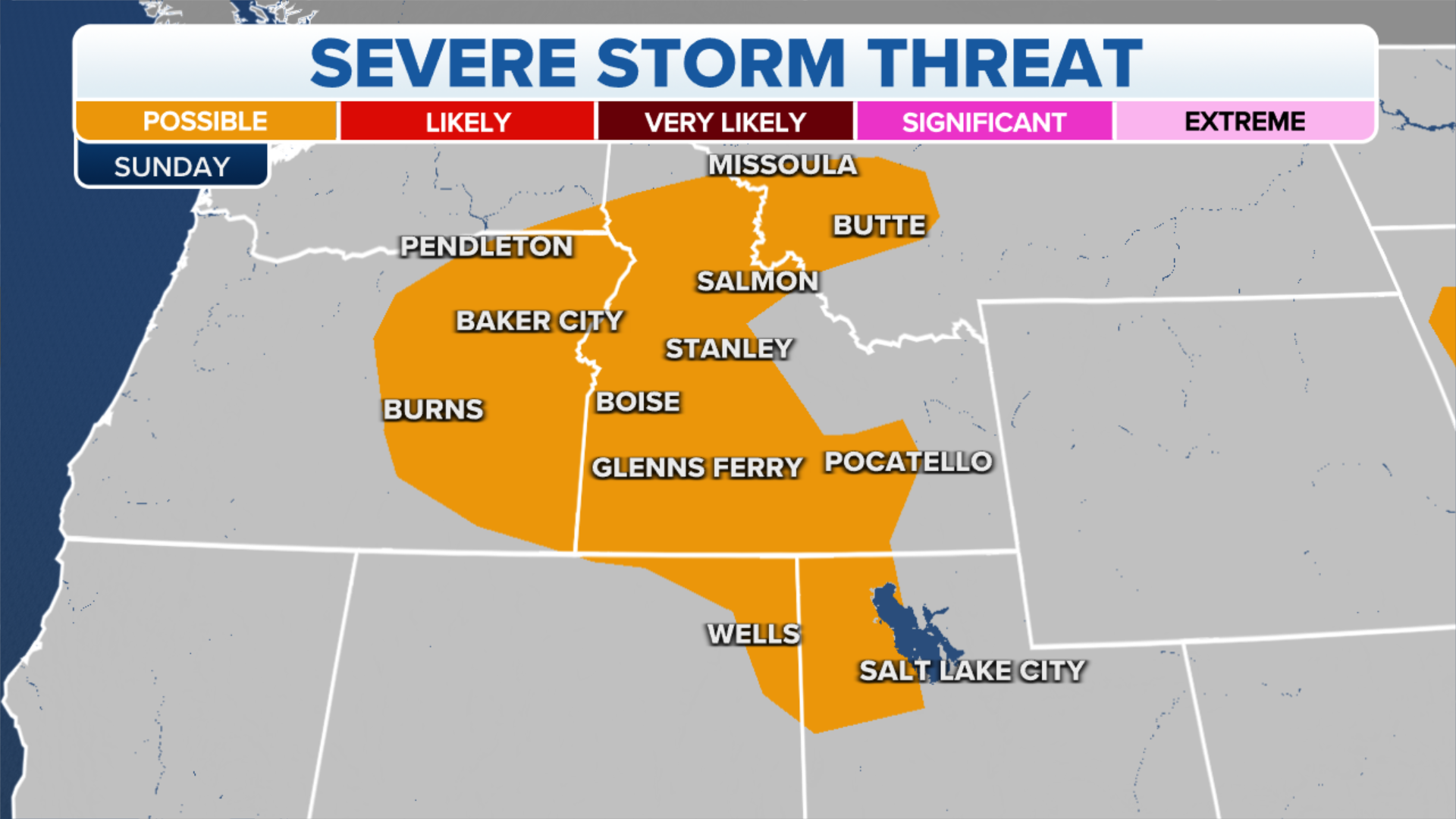 The region will mainly be dealing with heavy rain as the day continues, but thunderstorms are possible, and some of them could be severe.

The chance for strong to severe thunderstorms is centered from extreme southeastern Washington and northeastern Oregon and central and northern Idaho. 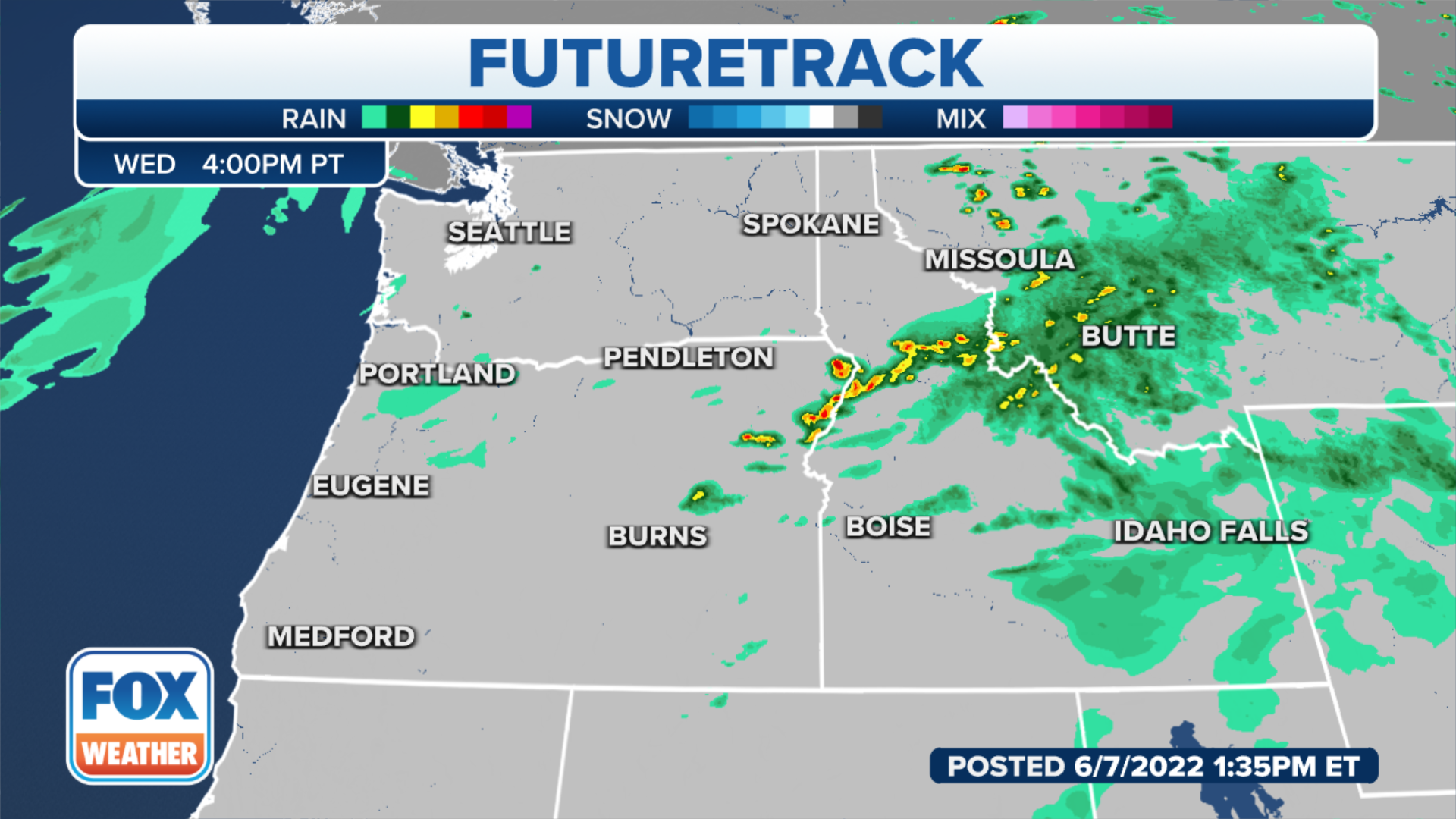 Looking ahead into late Sunday afternoon and into the evening, storms are possible across the Pacific Northwest, but the heavier rain and thunderstorms are expected in eastern Oregon and central Idaho.

Showers and storms are also possible across the northern Rockies, including Montana and Wyoming. 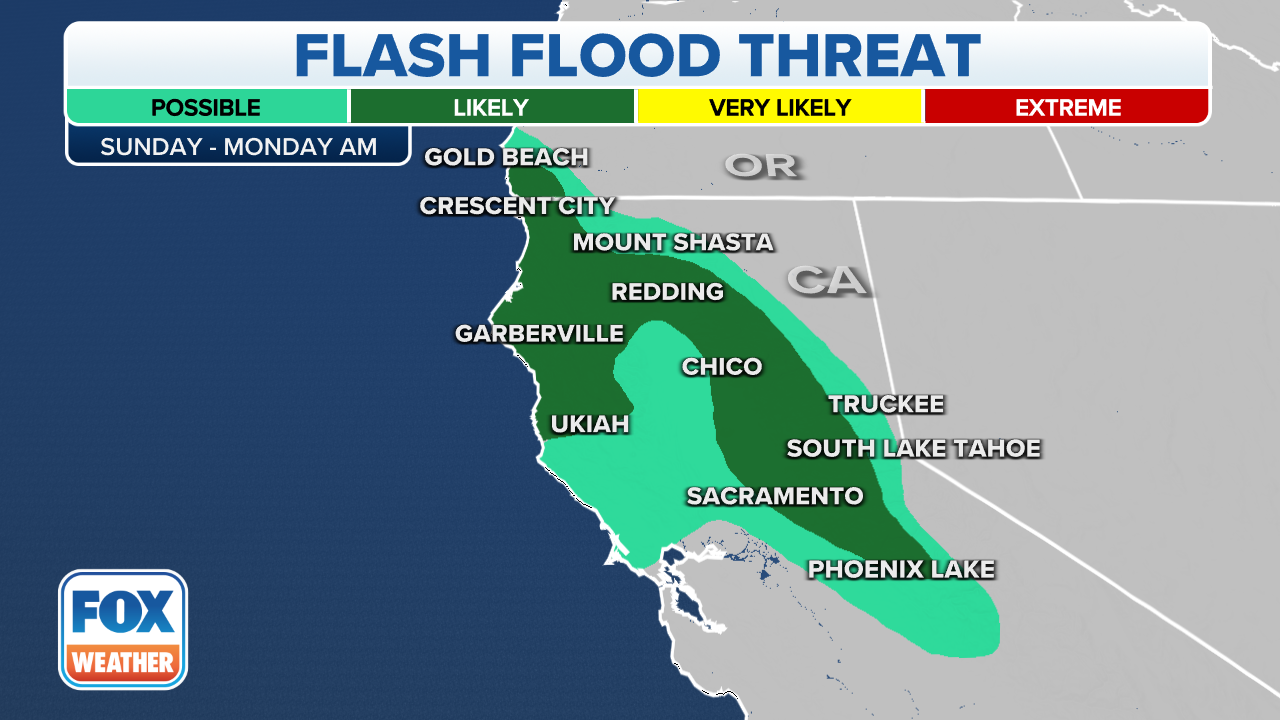 The risk of flash flooding on Sunday, June 5.
(FOX Weather)

There is a chance for flash flooding in the region, with the highest risk being seen in eastern Washington, northeastern Oregon and northern Idaho.

Spokane, Washington, La Grande, Oregon, and Grangeville and McCall in Idaho have the highest chance of seeing flooding where the heavier rain sets up. 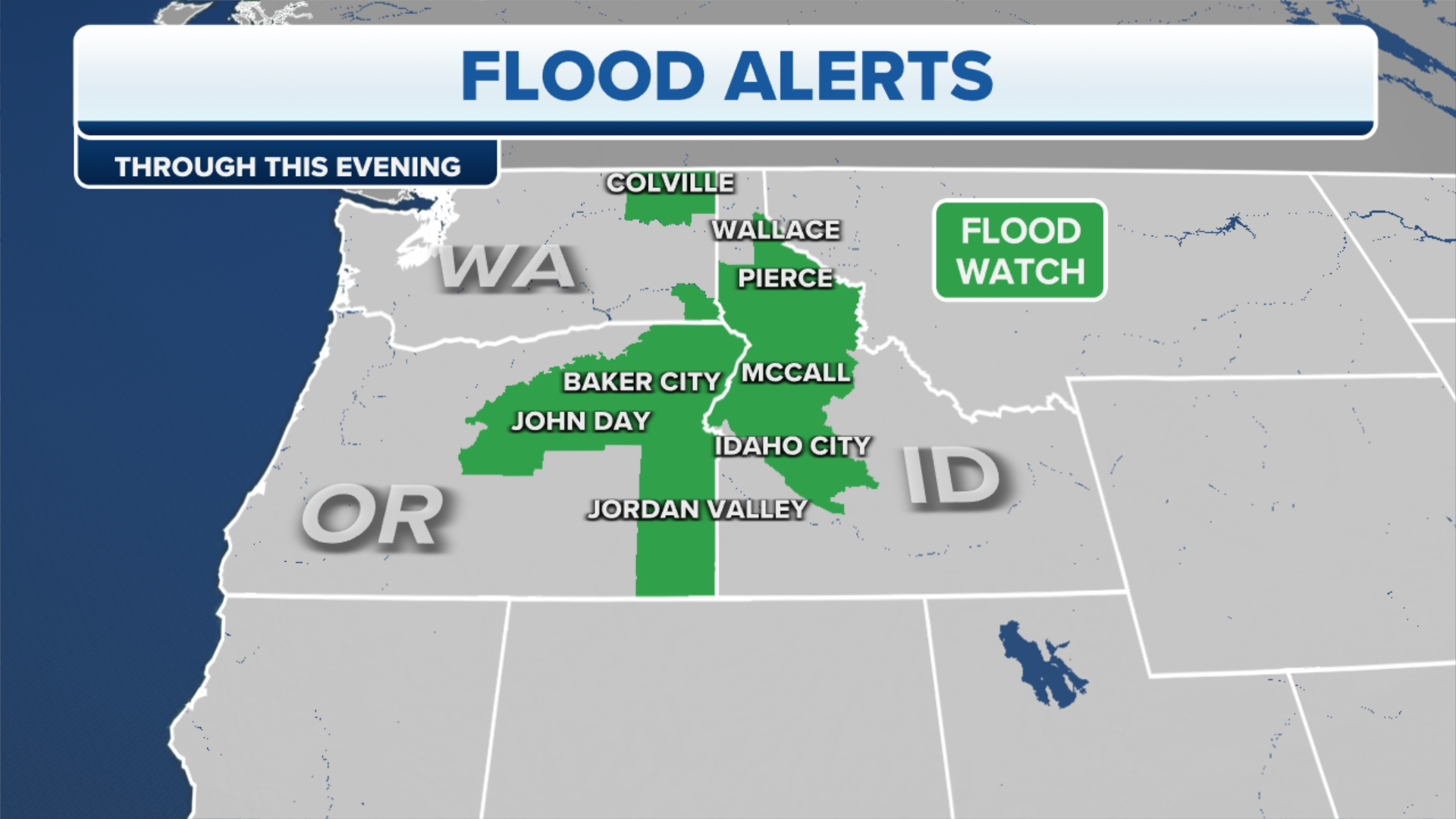 Flash Flood Watches are in effect in Washington, Oregon and Idaho on Sunday, June 5.
(FOX Weather)

And because of the risk of heavy rain and thunderstorms, the National Weather Service issued Flash Flood Watches in the region.

Alerts in Washington include the cities of Oroville, Leavenworth and Spokane, with Lewiston also seeing a Flash Flood Watch until Sunday evening.

In northeastern Oregon, the cities of Pendleton, Fossil and John Day are included in the Flash Flood Watch.

The threat of flash flooding is lower in Idaho, but alerts are in effect for areas in the northern part of the state. 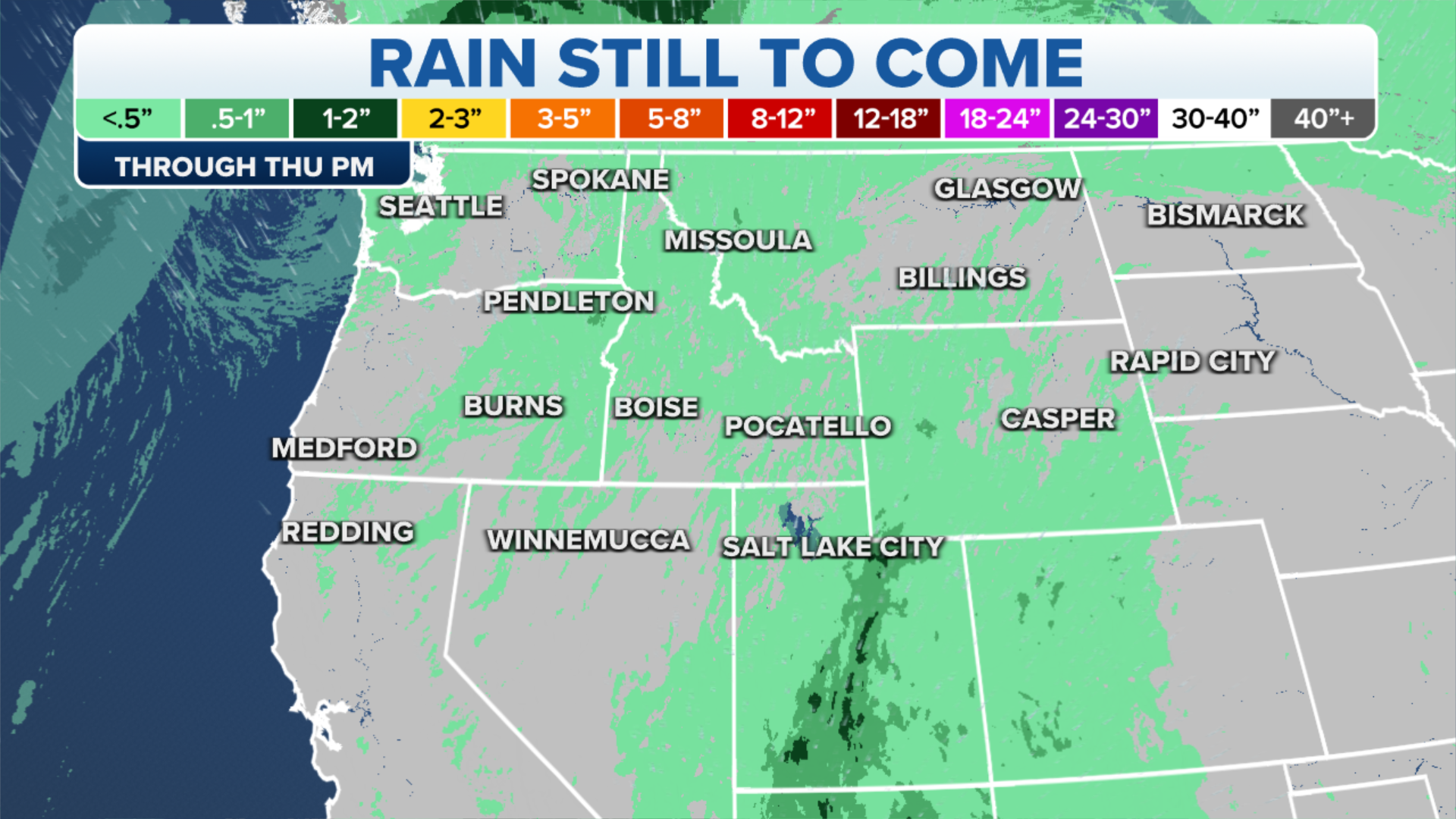 Here's how much rain could fall on Sunday, June 5.
(FOX Weather)

Most other areas could pick up less than an inch of rain, but where the Flash Flood Watches are in effect, anywhere from 1 to 2 inches of rain could fall.