A satellite image shows nary a cloud aside from some patchy fog along the entire west coast on Nov. 15, 2022.

Sunglasses were in high demand in the West this week – and add any directional adjective to "west" and it still rings true: Northwest, Southwest; sunny skies stretch for thousands of miles.

A visible satellite photo shared from the National Weather Service office in Seattle paints the picture: It looks like a reference Google Map, but it's a real photo.

"Nary a cloud to be found along the entire 1500+ mile length of U.S. 101 in mid-November," the NWS tweeted. U.S. 101 runs from Olympia, Washington, all the way south to the California-Mexico border.

But the clear skies expanded even beyond the coastal highway. A wider view shows clear skies stretching well to the north into British Columbia – as far north as Haida Gwaii off Vancouver Island – and to the south into Mexico past Baja California.

Even the Intermountain West states were enjoying a rare November sunny day; the only blemish was areas of patchy fog in the valleys and basins.

While widespread clear skies are common during the typically dry summers in the West, mid- to late November is traditionally a very stormy period – particularly in the Pacific Northwest.

November is among the wettest months of the year in western Washington and Oregon, but Seattle is looking at nearing or perhaps breaking its record for the longest stretch of dry weather in November – a streak that could reach 13 or 14 days by early next week.

A huge ridge of high pressure is parked along much of the West Coast, acting both like a force field to keep clouds and storms away, while bringing warm, dry, sinking air to dissolve any clouds that dare try to sneak in.

Adding to the clearing, the ridge was positioned on Wednesday to bring an offshore wind to much of the Pacific coast. With mountain ranges that parallel much of the coast, sinking air from the easterly winds dries the skies even further, leaving cloud development… difficult.

Easterly wind gusts were reaching 30 to 40 mph along the mountain gaps in the Pacific Northwest, but it was too much wind in Southern California where a strong Santa Ana wind event was underway.

WHAT ARE THE SANTA ANA AND DIABLO WINDS?

The Santa Ana winds are blowing across Southern California this week, increasing the risk of rapidly spreading wildfires.

Gusts were forecast to reach 40 to 55 mph across the Los Angeles and San Diego basins, with higher gusts in the eastern mountains. One gust already hit 102 mph at Magic Mountain Truck Trail, according to the National Weather Service in Los Angeles. The dry and gusty winds are creating elevated to critical fire danger conditions in that region. 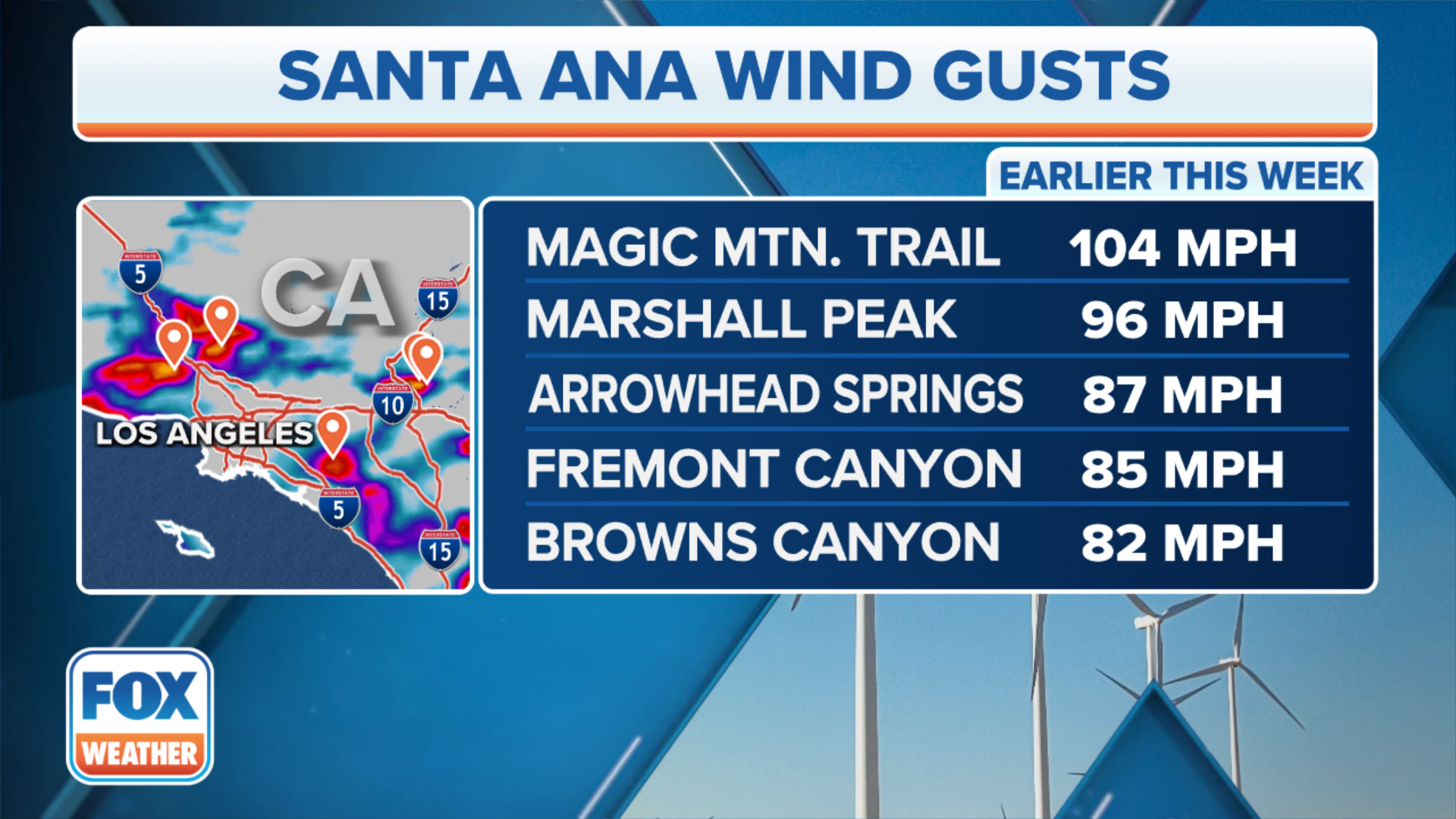 The sunny and windy pattern will hold through the end of the week, but a large-scale pattern shift is in the offing for Thanksgiving week as the ridge breaks down and the jet stream returns to its usual position, peppering the Pacific Northwest with frequent stormy days. The sunshine will hold in California and the Southwest, if your sun fix needs an extension.