NWS Fairbanks Meteorologist Jonathan Chriest says Typhoon Merbok was the strongest storm to enter the Bering Sea in September in 70 years. Chriest noted to FOX Weather that the city of Nome saw water 9 feet above the normal high tide line.

GOLOVIN, Alaska – A historic storm blasted western Alaska Friday and Saturday with hurricane-force winds, over 50-foot seas and coastal flooding not seen in decades, leaving homes flooded, roads washed away and power out to a wide area.

What used to be Typhoon Merbok morphed into a powerful northern Pacific storm as it raced nearly due north and pushed through the Aleutian Islands Friday and into the Bering Sea Saturday, bringing a dangerous storm surge inundating coastal villages and towns under several feet of water for hours.

Alaska Gov. Mike Dunleavy declared a state disaster area Saturday morning and was set to ask the U.S. government for a federal disaster declaration on Monday. But Dunleavy says despite the record-breaking impacts, the emergency operation center had not received any reports of injuries.

As the storm weakened and passed into the Arctic, towns and villages along the Bering Sea began cleaning up debris that had washed ashore. Dozens of homes and buildings flooded as the Bering Sea pushed inland, and several roads left damaged.

In Nome, where waters the storm surge reached just over 10 feet – 7 feet above the high tide line, high waters carried debris into the Snake River Bridge, causing damage. Pavement was missing from East Front street, according to Alaska's Department of Transportation.

Nome Mayor John Handeland tells FOX Weather the powerful northern Pacific storm that slammed western Alaska over the weekend was stronger than the superstorm of 1974.

Water levels in Unalakleet peaked just over 13 feet Saturday morning – about 9-10 feet above high tide line – reaching one of the largest peaks on record, according to the National Weather Service, with debris covering roads in town.

Major flooding was reported in Golovin where a one-two punch of rain and wind raked the coastal town. A much as 6 feet of water came into the community along with a peak wind gust of 63 mph. The old Golovin airport was under water and photos from town showed debris littered across the area.

Significant flooding was also reported in Skaktoolik, Kotlik, Scammon Bay, and Newtok, where a dozen homes flooded leaving and over 35 people were displaced, according to KTUU-TV. Some communities lost over 100 feet of shoreline due to erosion, according to the Alaska DOT. 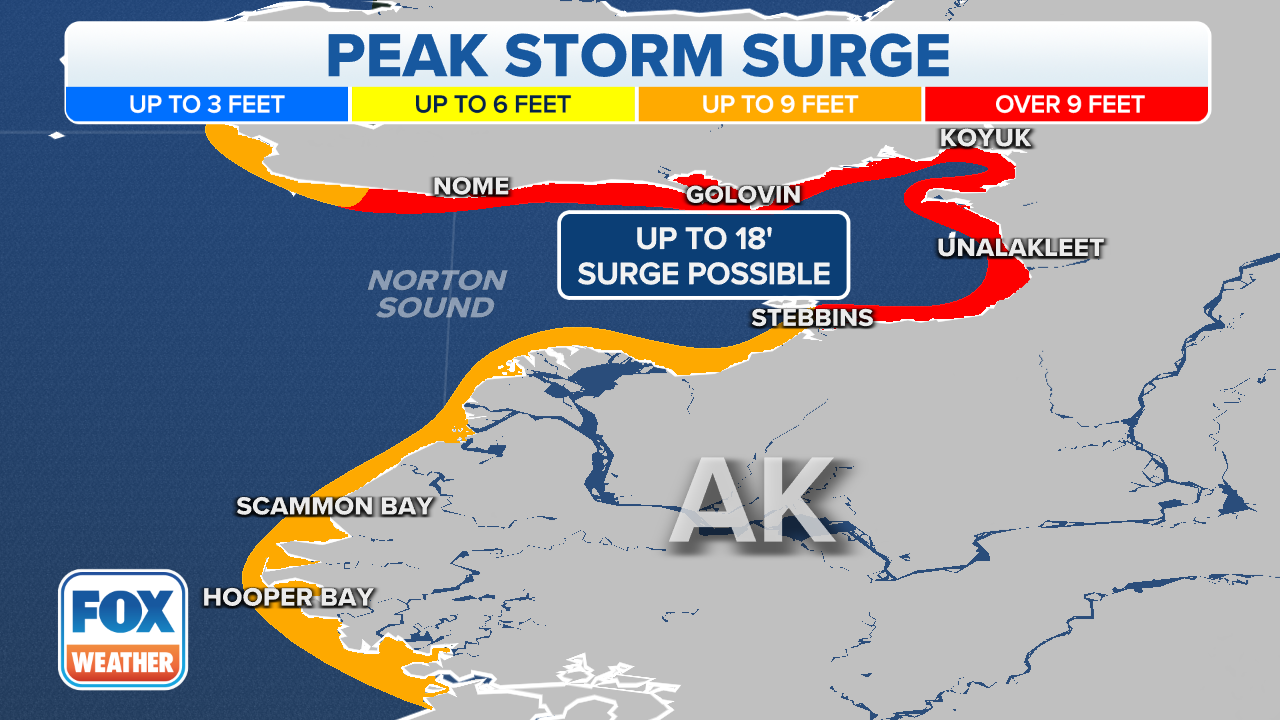 The Bering Sea was pushing over berms along Shaktoolik and water was entering the coastal community, getting close to flooding homes. Residents have evacuated to the town's school and clinic.

However, the state seems to have dodged a bullet when it comes to avoiding significant damage to their critical airport network which is crucial for supplies.

"Overall our airport system was resilient in the face of this storm event," a spokesperson with the Alaska DOT said in a storm update posted on their web page. "With so many communities affected by this event, we have confirmed that we haven’t seen major damages on our runways, although we have had personnel out clearing debris off of runway surfaces, and are hearing that access to roads to the airports have been compromised."  They did note some runway damage reported in Shaktoolik, Scammon Bay and Newtok.

Winds reach over 90 mph in spots

The storm surge was pushed by powerful winds circulating the deep storm center, which had reached as low as 937 millibars on its approach to the Aleutian Islands.

Cape Romanzof measured a gust of 91 mph while gusts reached 74 mph on St. Paul Island, and 63 mph in Golovin.

"Even though it is not officially a typhoon – which is what we could call a hurricane in the (U.S.) – it still has all of that powerful energy," said FOX Weather meteorologist Britta Merwin. "With strong winds, you’re pushing in a lot of water, and that means the sea levels (are) going to rise and coastal flooding is a concern as well as storm surge."

Offshore, the storm triggered monster seas in excess of 50 feet. A buoy 310 miles north of Adak reported wave heights of nearly 52 feet late Friday morning amid 74 mph wind gusts.  But despite the near hurricane conditions offshore, the Coast Guard said so far, no boats reported in distress as of late Saturday.

"We are standing by to see if anyone needs assistance, but so far the Coast Guard has received no requests for rescues," a U.S. Coast Guard spokesperson said.

What's worse, as the storm slows on its exit toward the Arctic, high water levels lingered for hours allowing wind-driven waves on top of the surge to push far inland and produce additional damage.  Water levels were not expected to return to average tidal levels until Monday across much of the affected region.

937 mb low a record for September

Intense storm systems are common for Alaska, but seeing an extra-tropical cyclone with a pressure of less than 940 millibars is not frequent.

The storm's central pressure dropped to 937 mb which was the deepest low for September in at least the last 17 years measured in the region.

"It’s definitely going to be a significant event. It’s shaping up to be one of the worst events that we’ve seen for years," the National Weather Service office in Fairbanks, Alaska, said.

Communities such as Adak, Unalaska, St. Paul, St. Johns and Bethel will all be near the center of the storm.

"For most of those Alaskan communities, when a storm is bearing down, they don’t have the capability for evacuations. So, what they normally do is they’ll go to a community shelter, which is the safe option," said Jeremy Zidek, public information officer at Alaska’s Division of Homeland Security and Emergency Management. "Supply chain issues, transportation issues and weather issues are kind of a regular occurrence, so people have to be pretty resilient to even live in those areas."

Meteorologists and first responders were most concerned about the maritime community, which produces most of the nation’s seafood.

Pacific salmon, crab, Pacific cod, shrimp, herring, sablefish pollock, and Pacific halibut are all harvested from Alaska and lead to more than $5 billion in economic activity in Alaska every year.

Fomer Typhoon Merbok to have affect on U.S. weather

Typhoon Merbok is one of several significant storm systems from the West Pacific that are expected to get caught up in the jet stream and impact U.S. weather.

Abnormally warm water in the North Pacific is one of the ingredients helping to enhance the lifecycle and strength of the northern cyclones but not enough to help them sustain their tropical cyclone identity into the northern latitudes.

Similar to the Atlantic basin, the Northwest Pacific typhoon season is running behind normal, only seeing about half the storms that they are used to seeing by mid-September.

During recent weeks, the West Pacific has seen an uptick in activity with typhoons Muifa, Hinnamnor and Merbok, and now Nanmadol.

Most, if not all, will lead to impacts in Alaska with rain, wind and high seas, meaning that the 49th state might be in store for a rainy time period.

Experts with the NWS’ Climate Prediction Center expect several weeks of above-average rainfall in the state.

Forecasters believe there will be increased rainfall chances across Alaska during the next several days.