57Posts
Back to Top

Follow live updates on the rolling warnings and watches being issued by the NWS as severe weather moves east.

Storm chaser: Tornado in Round Rock formed before warning 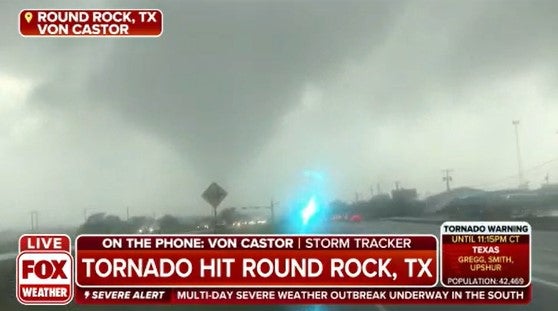 EXTREME WEATHER
Storm chaser: Round Rock, Texas not under a Tornado Warning when twister touched down
ROUND ROCK, Texas – Late Monday afternoon a devastating tornado is believed to have hit the town of Round Rock and storm tracker Von Castor watched the entire event unfold.

A storm chaser told FOX Weather that he hadn't seen anything like this Texas outbreak in quite a while. Significant damage was reported in Madison and Houston counties during the overnight hours.

Tornado Watch extends to Houston through 8 AM

The Tornado Watch has been extended southward, which no includes cities like Houston, Galveston and College Station.

The Tornado Watch will be in effect for parts of Texas until 8 AM CDT.

A Flash Flood Warning has been issued for several counties in Texas that include Austin.

The NWS says that 1-3 inches of rain have already fallen in the area and they expect another 1-3 throughout the rest of the overnight hours.

The system producing the severe weather over the South is expected to trigger more rounds of severe storms on Tuesday across parts of the South.

The National Weather Service has issued a Tornado Warning for Caddo Parish in northwestern Louisiana and Harrison County in northeastern Texas.

Extensive damage is being reported in the town of Madisonville, Texas.

FOX26's Matt Seedorff is on the ground surveying damage and reports major parts of the community are without power.

Storms cause damage around Round Rock, Texas

See more video from the area around Austin: Click Here

The FOX Weather 3D Radar is tracking two cells that could produce tornadoes in the eastern part of Texas. One storm is near Nacogdoches, Texas and the other is in the Ark-La-Tex region.

The National Weather Service has issued Tornado Warnings for the counties being impacted by both storms.

Download the FOX Weather App now and track the storms.

Storm reports across Texas and Oklahoma

The National Weather Service so far amassed 66 reports of strong winds, tornadoes and large hail across Texas and Oklahoma. The line of storms continues to push east toward Arkansas and Louisiana.

Over 51,000 without power across Texas and Oklahoma

Almost 41,000 homes and businesses in Texas lost power from the storms. 32% of Madison County and 21% of Jack County, Texas are in the dark.

Over 10,000 in Oklahoma lost power including 67% of Marshall County.

There have been reports of a tornado with the storm currently headed towards Tyler, Texas.

Take shelter immediately if you live in the area. 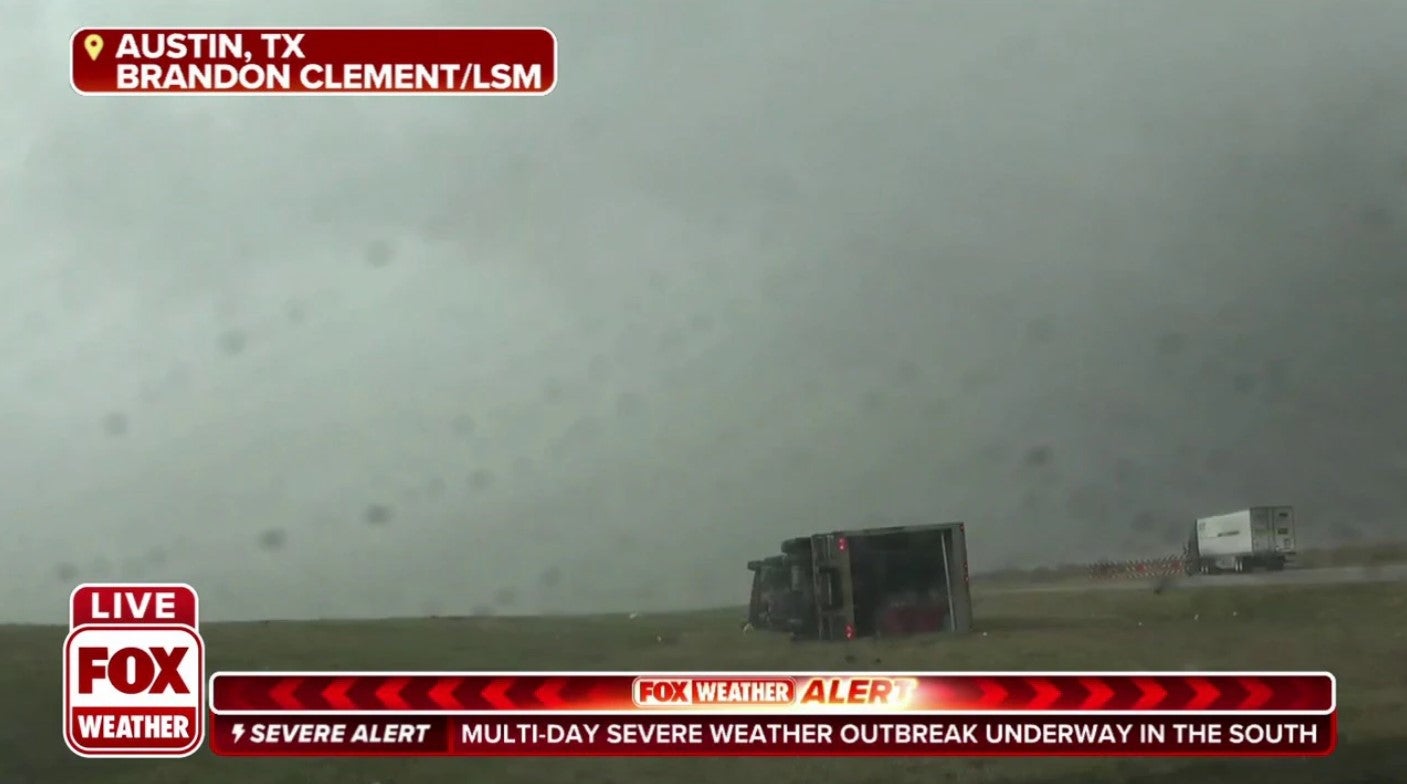 EXTREME WEATHER
'Get off the road and shut her down' veteran truck driver warns tractor trailers on I-35
Bobby Noone, a veteran truck driver, is safe at home, but he says he feels for the drivers stuck in the severe storms that impacted parts of Texas."I am happy because I'm not in a windstorm like them, poor people in Texas, but I have been through a few of them to tell you it's a dangerous situation to be in," Noone said.
Posted by Heather Brinkmann Share

Tornado warnings and severe thunderstorm warnings are ongoing at this hour in Texas.

Storms will continue to push east throughout the night.

WATCH: Drone captures video of a tornado in Elgin, Texas

A drone operator captured video of a tornado that moved through Elgin, Texas.

Terrifying video: Round Rock tornado has Walmart shoppers running for their lives

The severe storm threat will continue into the evening hours.

A Tornado Warning has been issued for Grimes, Burleson and Brazos counties in Texas, which includes the College Station area.

Meteorologists warn the rotation appears to be significant as the storm moves to the northeast.

A Tornado Watch has been issued for parts of eastern Texas, Louisiana and Arkansas until 3 a.m. CDT.

Meteorologists warn conditions will continue to be favorable for tornadoes to develop during the overnight hours.

Visible satellite gives a view of the ongoing storms along with the night lights of the major cities in Texas.

Storms will continue to push east throughout the evening.

The Round Rock Police Department says two temporary shelter locations are being set up for storm victims. One will be at the Dell Diamond Heritage Center (3400 E Palm Valley Blvd) and the other will be Redbud Elementary School (1500 Ty Cobb Place).

Video shows extensive damage to a school in Jacksboro, Texas after a tornado ripped through the area.

VIDEO: Tornado outside of Austin

Andrew Messersmith took video of an apparent tornado near Elgin, Texas, which is near the Austin area. Messersmith said he saw trees and power lines down after the tornado moved through.

At least one school in north-central Texas was damaged during the severe storms. Significant damage was reported at Jacksboro High School, where buildings and a gym appear to have sustained damage.

The National Weather Service in Fort Worth reports the radar site in the Fort Hood, Texas area suffered communication problems and is down because of technical reasons.

The radar site went down when the area was under a Tornado Warning.

More than 80,000 power outages were reported as of Monday evening throughout Texas and Oklahoma according to PowerOutage.US.

Due to storms, air travel at the Dallas Fort Worth has been temporarily halted.

A tractor-trailer near Austin, Texas was blown over during the severe storms.

Multiple reports and photos show that a tornado passed through Round Rock, TX and crossed I-35.

This is one of several reported tornadoes across The Lone Star State this afternoon.

Strong rotation has been detected on radar near Jarrell, Texas along I-35.

Meteorologists say this means a tornado is likely on the ground and moving to the northeast through Williamson County.

A Tornado Warning has been issued for Hays and Travis counties, which includes the city of Austin, until 6:15 p.m. CDT.

Meteorologists were tracking a severe thunderstorm capable of producing a tornado near Buda, moving northeast at 35 mph.

If you are in the path of the possible tornado, experts advise you to take cover in a basement or an interior room.

The storms will continue to push off to the north and the east at around 25 mph.

Significant damage reported in Jacksboro after apparent tornado moves through 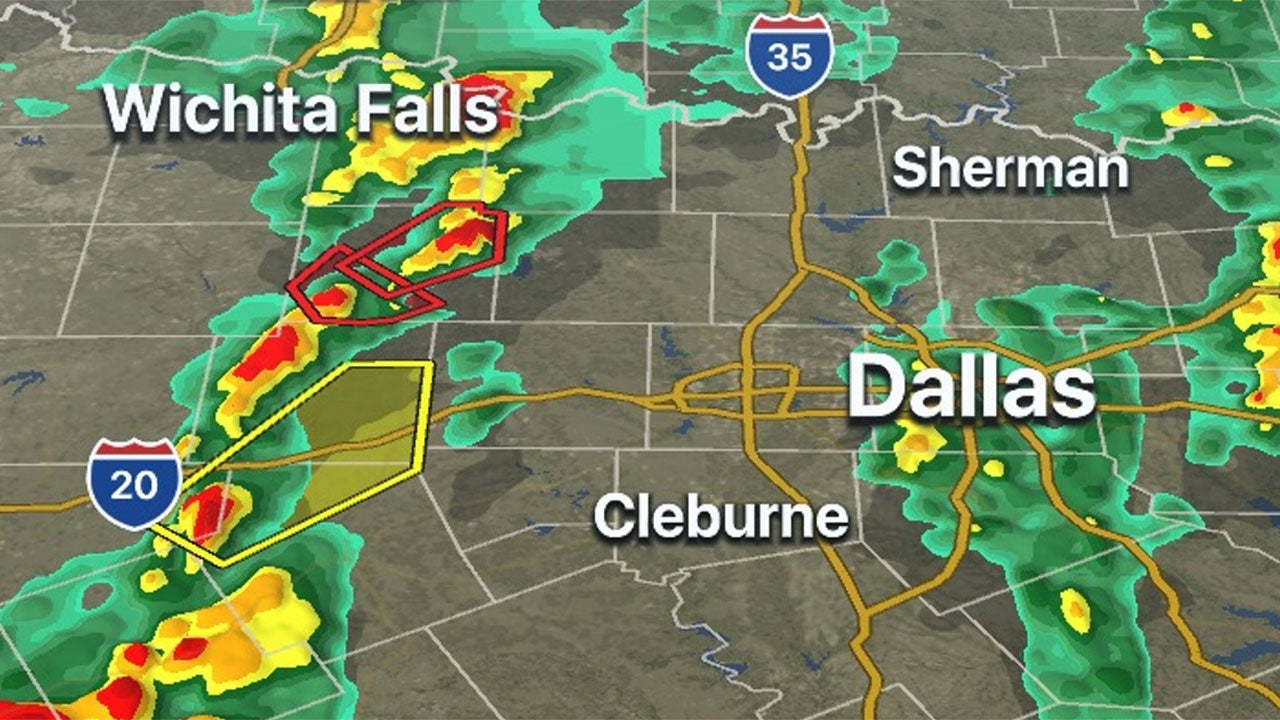 WEATHER NEWS
Texas damage: Tornado-warned storms strike Bowie, Jacksboro
Damage is being reported near the town of Jacksboro, Texas, after a tornado warning was issued for the area.

Several structures were reported damaged in Jacksboro, Texas after an apparent tornado moved through the town.

Meteorologists are tracking a storm with rotation in Wise and Denton counties that is capable of a tornado. Both counties are under a Tornado Warning until 5:30 p.m. CDT.

FOX Weather 3D Radar continues to track a tornado-warned storm moving towards the Texas-Oklahoma state line. Montague County in north-central Texas is the latest county to be put under a Tornado Warning until 5 p.m. CDT.

Meteorologists say this is the same storm that already produced a tornado in Jack County and could do so again.

Damage is being reported near the town of Jacksboro, Texas, after a tornado warning was issued for the area.

Jacksboro is located about 60 miles northwest of Fort Worth.

A debris signature associated with the tornado-warned storm was detected on radar. A short time later, the National Weather Service began receiving reports of damage in the area.

According to the NWS, lots of debris is being reported 6 miles west-southwest of Jacksboro. Damage to buildings, trees and mobile homes is also being reported. A roof is also reportedly collapsed on a home about a mile west of the town.

About 4,300 Harlingen, Texas residents are without power Monday as strong winds continue into the evening.

A tornado has reportedly caused damage near the town of Jacksboro, Texas.

Jacksboro is located about 60 miles northwest of Fort Worth.

A debris signature was detected on radar associated with the tornado-warned storm as it approached the town. The National Weather Service reported damage to trees and mobile homes has been reported.

The storm was moving northeast at 35 mph.

A Tornado Warning has been issued for Jacksboro, Newport and Cundiff, Texas until 4:30 PM CDT.

The Tyler Police Department is monitoring the severe weather and is advising people to take precautions before the system moves through.

Here's how to prepare for a tornado outbreak: Click Here

Rain falling at over 5 inches per hour

FOX Weather radar estimates that rain is falling at a rate of 5.41 inches per hour from a severe thunderstorm over Erath County, Texas. Much of the state is under a flood watch.

More than 13 million Texans are under a Tornado Watch until 10 p.m. CT. Areas include, College Station, Austin, San Antonio, Dallas and Sherman.

First tornado warning issued for areas west of Fort Worth

The National Weather Service has issued the first Tornado Warning of the severe weather event. Young, Jack, Stephens and Palo Pinto counties in north-central Texas are under a Tornado Warning until 3:30 p.m. CDT.

Meteorologists said they are tracking a thunderstorm capable of producing a tornado near Possum Kingdom State Park moving northeast at 50 mph.

As wind gusts increase to 40 and 50 mph and heavy rain moves into the Houston area. The evening commute could become hazardous. Brazos Valley and College Station areas will begin to see this threat materialize around 3 p.m. CT, according to the NWS Houston.

Flood alerts for the South through Wednesday.

A Flood Watch is in effect until Wednesday morning for east Texas, most of Louisiana, south Arkansas, Mississippi and northwest Alabama.

LEARN: What is a ‘hatched area’? 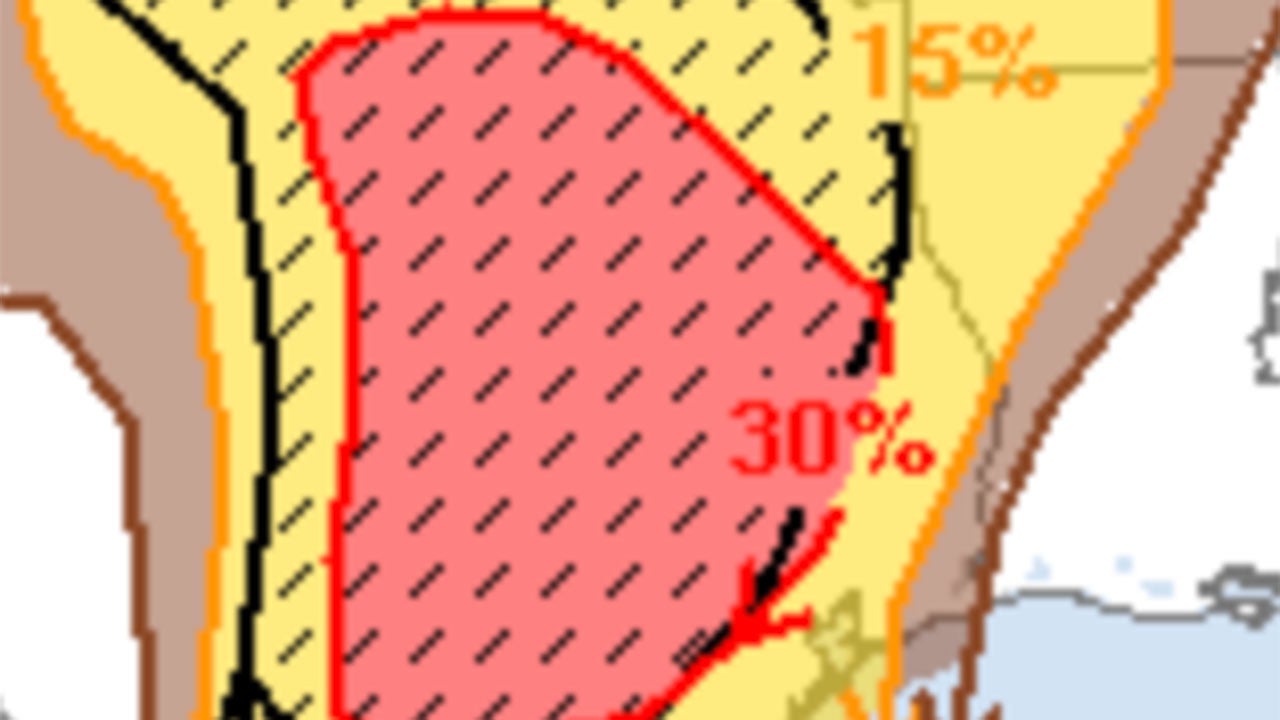 LEARN
Here’s what the ‘hatched area’ on a severe weather map means
You’ll occasionally hear meteorologists talk about the so-called "hatched area" when describing the outlook for severe weather.

A "hatched area" means there is a significant threat of the particular type of severe weather being described in the associated map inside the highlighted area.

For example, if you are looking at the outlook map for hail, and you see a "hatched area," it means there is a good chance that large hail is possible inside that area.

The NWS has issued Wind Advisories for parts of south central and southeast Texas through Monday evening.

The possibility of damaging winds with gusts up to 45 mph is very likely for area including, Dallas, Shreveport, Houston and Austin. The threat becomes significant in Lufkin and Waco.

The NWS Storm Prediction Center has issued a Severe Thunderstorm Watch for portions of Southwest and South-central Oklahoma and Northwest Texas until Monday at 9 p.m. CT.

The primary threats will include large hail, damaging wind gusts up to 70 mph and possible tornado activity.

America's Weather Team coverage across the path of severe weather

FOX Weather journalists are stationed across the South where severe weather is forecast in the coming days.

Now is the time to prepare for severe weather LEARN
What you should do to prepare for tornadoes
Forecasters can generally forecast the threat of tornadoes, but where they touch down is still a bit unpredictable.

With the threat of tornadoes looming, don't wait until one is at your doorstep before preparing for severe weather. Charge your phone, make sure you have batteries and other essentials.

FOX Weather tracking threat of hail, tornadoes and flooding across the South

A clash of the jetstream and a low-pressure system will result in the potential for numerous severe storms to develop beginning Monday afternoon and continue into Wednesday as the system tracks east.

FOX Weather is closely monitoring the threat of a multiday severe weather outbreak with tornadoes, damaging winds, large hail and flash flooding that will impact the south-central and southeastern U.S.

Here's where things stand with the forecast.