43Posts
Back to Top

Winter Weather Alerts for the Northeast

Connecticut Governor Ned Lamont announced the closure of all state office buildings closed on Friday, due to the winter storm.

Forecast models show that northern parts of the state could see upwards of a foot of snow.

Airlines across the U.S. have already canceled 2,207 flights Friday according to FlightAware.com. The majority of the canceled flights were heading to and from airports in the Northeast.

On Thursday, airlines canceled 3,699 flights and 5,518 flights were delayed.

The storm will spread freezing rain, sleet and snow across much of Pennsylvania. Pennsylvania Department of Transportation, Alexis Campbell told FOX Weather that her biggest concern is ice.

The National Weather Service issued an Ice Storm Warning for the mountainous west-central portion of the estate until 10 a.m. local time. A quarter to a half-inch of ice could accumulate on surfaces.

The Pennsylvania Turnpike implemented Tier 1 restrictions. The restrictions ban empty big-rigs, oversized loads, RVs, trailers and motorcycles. The speed limit dropped to 45 mph and commercial vehicles are only allowed in the right lane.

Snow pushes toward Western New York while an icy mix heads for Pennsylvania. The precipitation moves to the eastern seaboard late night through the early morning.

New York City - under an inch

FOX Weather has the latest road conditions from the Midwest to the Northeast.

Slush is quickly freezing over across Iowa and Missouri. Watch for icy patches. Detroit and Chicago will see snow through the overnight with only 1-4 inches expected by morning.

Washington will continue to see rain possibly mixing with sleet overnight while Philadelphia will see mainly rain. Snow moves into New York and mixes with freezing rain in time for the morning commute.

Boston will see all snow into Friday morning.

The New York City Emergency Management Department issued a travel advisory for late Thursday through Friday. The city will see snow changing to an icy mix including freezing rain into early Friday.

DOT crews will work through the night to pre-treat and clear roads said the DOT Commissioner. But, he urges commuters to use mass transit. Over 700 salt-spreaders are filled and ready he said.

100+ million in path of winter storm

Winter weather alerts continue from the Canadian border, through the Mississippi River, into Texas and to the Atlantic. Over 100 million Americans saw or will see heavy rain, freezing rain and snow.

New Jersey's Public Service Electric and Gas Company said that they added extra personnel to the schedule to be ready for the freezing rain, sleet and snow heading for the state. The ice weighs down tree limbs and wires which can cause them to snap and take out power.

Northern New Jersey and much of Pennsylvania could see up to half an inch of ice by Friday morning.

HOW MUCH ICE IS NEEDED TO KNOW OUT POWER, DAMAGE TREES?

Customers Without Power (according to PowerOutage.US)

Work remotely if you can says New York Governor

New York's Governor said in a press releasse that the state's emergency response assets are ready but warn residents that the snow and ice are on the way.

FurtureTrack shows Western New York getting snow before midnight. The New York Metro area and most of Pennsylvania will see an icy mix.

The snow forecast into Friday morning.

Up to a foot of snow could fall across New England warns the National Weather Service. The heaviest snow will fall during the morning commute from 7 a.m. to 3 p.m. The New Hampshire Department of Transportation urges everyone to delay travel if possible as snowfall rates could approach 1-2" of snow per hour.

Over half of all flights coming arriving or departing from the Dallas-Fort Worth International have been canceled due to this strong storm according to FlightAware.com.

New York DOT: When the snow comes we will be ready

NYDOT is pretreating the roads with salt ahead of the winter storm.

Snow is expected to start overnight with several inches falling through Friday morning.

Ahead of the incoming snow the city of Providence has issued a parking ban for Friday.

FOX Weather Multimedia Journalist Will Nunley captured this video in Cape Girardeau, Missouri, where he says he's seen a little bit of everything this afternoon, including lightning, thunder, freezing rain and sleet.

Officials are urging people to stay off the roads in Oklahoma as a winter storm continues to impact travel across the state on Thursday. FOX Weather Multimedia Journalist Hunter Davis is reporting on the icy conditions in Tulsa. 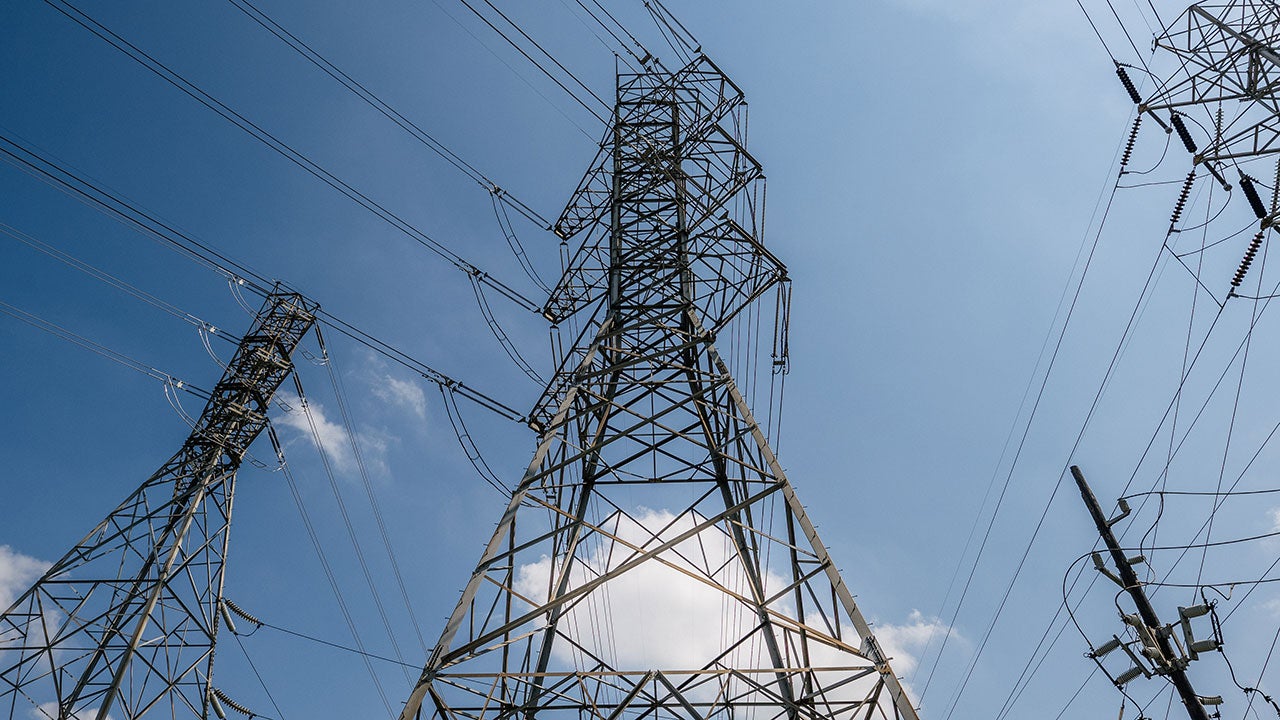 With subfreezing temperatures throughout most of Texas through Friday, state power regulators are expecting demand to be high.

However, ERCOT has not issued a notice for consumers to reduce their usage, as of Thursday morning.

Heavy sleet and snow overspreading I-70 corridor in Illinois, Indiana

An area of showers and a few thunderstorms, accompanied by a wintry mix of precipitation, is now overspreading the Interstate 70 corridor from Illinois into Indiana. This includes periods of heavy sleet and snow, with snowfall rates occasionally reaching 1 inch or more per hour through Thursday afternoon.

At noon roads are partly or mostly covered with ice across Missouri. MoDOT crews are out working to clear the roads.

FOX Weather's Will Nunley shared before and after images of a creek in Perry County, Tennessee. The creek has flooded covering a small bridge.

Winter storm to arrive in Northeast on Thursday night

Various winter weather alerts are in effect across the Northeast.

Snow and some ice will reach the Northeast on Thursday night, which could be heavy at times.

The New York City tri-state area is predicted to see a period of snow late Thursday night that changes over to a wintry mix of freezing rain and sleet by Friday morning, though the precipitation should remain mostly snow overnight to the north and west across much of upstate New York and New England.

All of these areas can expect dangerous driving conditions from the snow and ice.

What to expect in Arkansas from this winter storm

Sleet and freezing rain are predicted to continue into Thursday night in central and northern Arkansas before tapering off toward midnight. Some northern portions of the state might see up to a half-inch of ice accretion. Slippery roads are expected, in addition to tree damage and power outages in areas that see the most significant icing.

The brunt of the air travel impacts from this winter storm have been felt at Dallas/Fort Worth International Airport on Thursday. More than half of the flights scheduled to depart or arrive at DFW have been canceled.

FOX Weather is receiving numerous reports of "thunder sleet" from Arkansas as a large area of sleet and freezing rain extends from Texas to the Midwest. Doppler radar is detecting lightning strikes across many parts of this region.

Click here to read more about what causes lightning and thunder during a winter storm.

More than 32,000 without power in Arkansas

Through the 7 a.m. hour power outages related to the winter storm began rising in Arkansas with more than 32,000 customers now without power.

Conditions are expected to quickly deteriorate.

According to the NWS Office in St. Louis winter precipitation could end as late as 8 p.m. east of St. Louis.

WHOA: Truck slides across icy road US 54 in Missouri

Icy roads and fast speeds do not mix.

Missouri troopers shared this video as a warning to other drivers. A pickup truck was recording sliding across the icy road on U.S. 54 in Audrain County.

"Please slow down and buckle up."

Flood Warnings are in effect for multiple rivers in Alabama, Tennessee and Arkansas.

Up to 1 inch of rain is expected through Friday in Nashville, according to the NWS Nashville Office.

Image on the left by @weatherrkh/Twitter and on the right by Arkansas Division of Emergency Management.

Power outages are starting to rise across Memphis and into Arkansas as heavy ice is downing trees and knocking out power lines.

Sleet, freezing rain to increase in coverage and intensity over next few hours

NOAA's Storm Prediction Center says the wintry mix of sleet and freezing rain will increase in coverage and intensity over the next few hours.

Freezing rain (ice) will be the dominant precipitation type in the Ozarks of far southern Missouri and northern Arkansas, while sleet (ice pellets) is expected north of that ice zone in the rest of southern Missouri.

The Missouri State Highway Patrol's Troop F is currently working 11 crashes and responding to numerous slide-offs as of Thursday morning.

Many roads are ice-covered, making driving extremely difficult and hazardous. Motorists are encouraged to stay home if possible.

View from I-55 in Missouri.

FOX Weather Correspondent Will Nunley is in Missouri where the winter storm is creating a fog over I-55 with low visibility.

Layer of ice covering roads and sidewalks in Tulsa, Oklahoma

FOX Weather Multimedia Journalist Hunter Davis is reporting from Tulsa, Oklahoma, where a layer of ice is covering roads and sidewalks on Thursday morning.

The Texas Department of Public Safety is investigating a six-vehicle crash in Brazos County in southeastern Texas caused by icy roads.

The heaviest bands of freezing rain are making roads slick in the Dallas and Forth Worth area. FOX Weather Meteorologist Steve Bender shows you were conditions are deteriorating.

Temperatures 30 degrees below average in Texas

Temperatures in the Southern Plains for Thursday.

The chill has settled into the Southern Plains.

Temperatures in Texas and across the Southern Plains are between 20 and 30 degrees below average.

Click here to read more about how much ice accretion is typically needed to knock out power and damage trees.

Additional ice accretion in the Plains, Ozarks and Midwest.

The highest ice amounts on Thursday are expected in portions of northern Arkansas and southern Missouri, where the ice could be heavy enough to knock down trees and trigger power outages.

As much as one-quarter inch of ice accretion is possible in some areas of the Ozarks.

More than 1,000 flights canceled at Dallas/Fort Worth International Airport

Snow and ice from a major winter storm have triggered the cancellation of more than 1,000 flights at Dallas/Fort Worth International Airport so far Thursday morning.

About 50,000 customers are without power between the two states.

Total ice accumulations of up to one half inch are possible through Thursday night.

FOX Weather Multimedia Journalist Hunter Davis is reporting from Tulsa, Oklahoma, Thursday morning as the state braces for another round of sleet and freezing rain from this winter storm.

Arkansas Department of Transportation plowing roads ahead of morning commute

Snowplow drivers from the Arkansas Department of Transportation are working hard to clear snow and ice from roads across the state ahead of the Thursday morning commute. 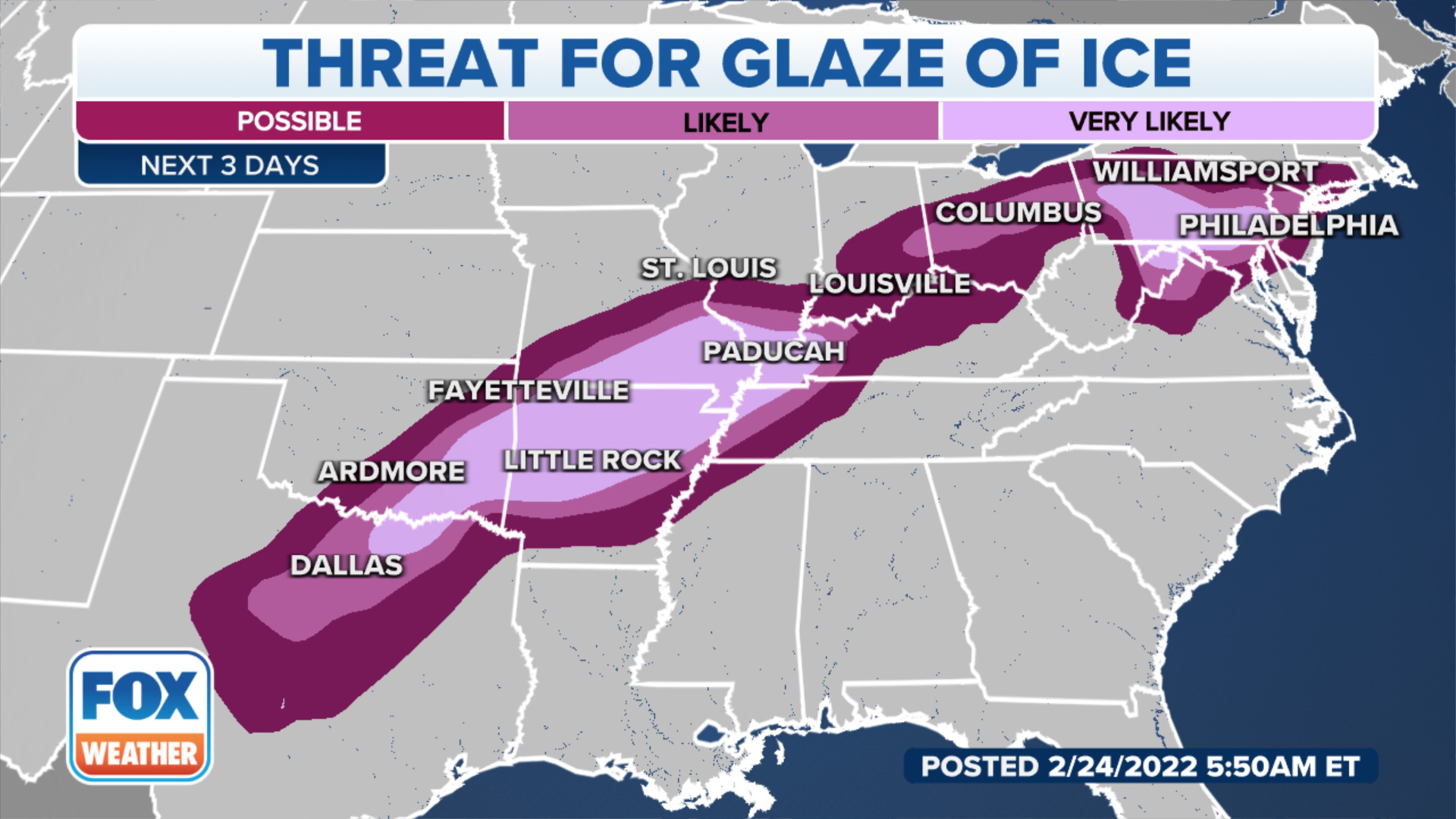 WEATHER NEWS
Snow and ice to expand from Southern Plains to Midwest, Northeast through Friday
The week's second winter storm is well underway in the central U.S. following on the heels of an early-week storm that brought snow and ice to the nation's northern tier and severe storms and flooding to the South.

Snow and ice from this next system will expand from the Southern Plains to the Midwest and Northeast through Friday.

A state trooper was responding to a crash on Interstate 35 in Oklahoma Thursday morning when another vehicle crashed into his. The officer was not in his vehicle at the time and was unharmed, according to the Oklahoma Highway Patrol.

Freezing rain has resulted in many roads becoming icy across parts of Oklahoma and Texas on Thursday morning. Officials are advising drivers to slow down and use extreme caution on the roads.