43Posts
Back to Top

The FOX Weather 3D Radar that tracked the severe storms across North Carolina and Virginia shows the complex is moving offshore.

So far, there no reports of widespread damage but PowerOutage.US reports around 5,000 outages.

VIDEO FORECAST: Storm threat to continue into evening for mid-Atlantic

Rain impacting flights in the Northeast

With the severe weather in the mid-Atlantic and rain in the Northeast, hundreds of flights have either been delayed or canceled. FlightAware reports more than 3,200 flights were delayed on Thursday across the nation with 778 cancellations.

The weather is forecast to improve across the country on Friday and into the weekend.

Tornado-warned storm near the City of Chesapeake, VA

The storm that prompted a Tornado Warning is now moving through southeastern Virginia. Meteorologists say rotation in the storm is radar indicated.

Here's the difference between a watch and a warning: Click Here

A Tornado Warning has been issued for Camden and Currituck counties in North Carolina and the City of Chesapeake in southeastern Virginia.

Meteorologists said a severe thunderstorm was capable of producing a tornado near South Mills and moving northeastward at 45 mph.

All Tornado Warnings have expired, severe storms continue across N.C.

All Tornado Warnings have expired in North Carolina, but the threat of severe storms will remain into the evening. The area is under a Tornado Watch until 9 p.m., which means the atmosphere is capable of producing tornadoes.

Several counties are under Severe Thunderstorm Warnings with large hail and damaging winds being likely.

Because of a storm with rotation near Mount Olive, NC, meteorologists have issued a Tornado Warning for Wayne County until 7 p.m.

More than 3 million people are under a Tornado Watch through Thursday evening. The FOX Weather 3D Radar is tracking numerous storms that are strong to severe along the I-95 corridor and points eastward.

The National Weather Service in Charleston says that they took a direct hit from a lightning strike as severe storms moved through the area.

The office handed over radar operations to another NWS office while the building recovers.

The National Weather Service in Birmingham plans to let the watch expire at 11 p.m.

The storm is located near Norman Park and moving east at 20 mph.

The National Weather Service says that an observed tornado was located near Pavo moving east at 30 mph.

The NWS in Tallahassee says that there aren't any current indications that a tornado is on the ground, but one could form at any moment given the strong circulation associated with the storm.

Spotter reports show that a tornado was spotted earlier in the evening with this storm.

Track the storms with the FOX Weather 3D Radar

Severe storms are ongoing across the Southeast at this hour.

Download the FOX Weather app to track the weather for your area.

Severe storms will continue for the next few hours, NWS says

The National Weather Service says that despite the sun going down, the potential for severe storms will continue for at least the next 1-2 hours as storms continue to develop along the cold front.

Severe hail and damaging wind are the main threats with these storms. Tornadoes are also possible.

FOX Weather is tracking a tornado outside of Swainsboro, Georgia

Meteorologists are tracking a suspected tornado in Johnson County, GA that could be moving eastward around 60 mph. The most significant part of the storm is expected to remain north of Interstate 16.

Areas around Swainsboro, Twin City and Adrian are all under a Tornado Warning through at least 8:45 p.m.

A Georgia resident spotted a possible tornado near the town of Leslie, GA on Wednesday afternoon.

Tornado-warned storm along I-16 in Central Georgia

A Tornado Warning has been issued for Laurens County in Central Georgia until 8:30 p.m. The storm is located near Interstate 16 and continues to push eastward.

Meteorologists continue to track a storm that could be producing a tornado across South Georgia. Lowndes County, GA is now under a Tornado Warning as the storm continues its eastward trek across the state. 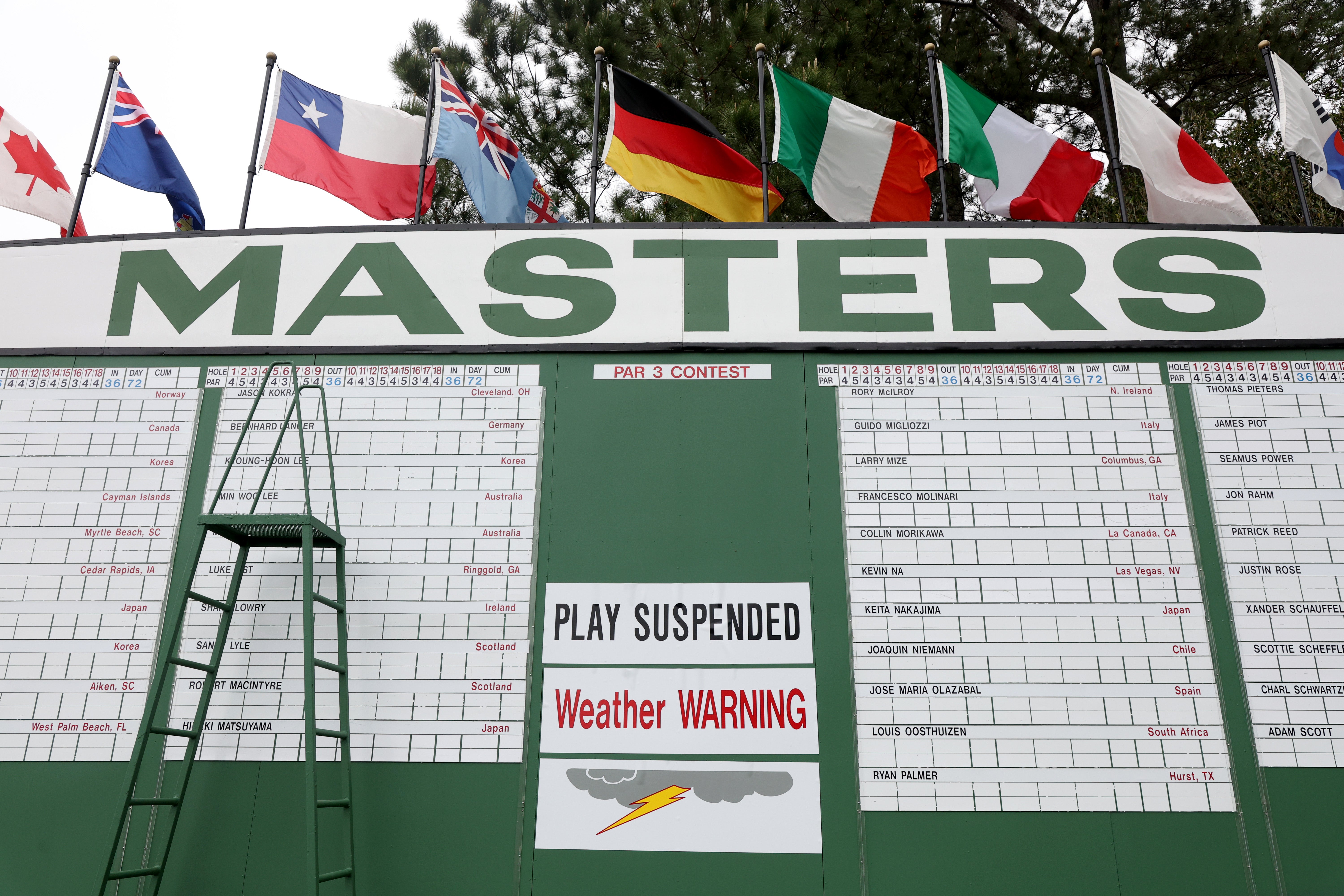 Even though rain is impacting the Augusta area, skies are expected to clear for main part of the golf tournament.

For more on the severe weather threat: Wednesday's forecast

Meteorologists continue to track a storm with a possible tornado north of Charleston, SC. Berkeley County is under a Tornado Warning as the storm moves eastward at 25 mph.

With the storm's current movement, it will stay to the north of the city but the entire area remains under a Tornado Watch through the night.

A Tornado Warning has been issued until 6 p.m. Eastern on Wednesday for Jefferson and Leon counties in the Big Bend region of Florida.

The National Weather Service said the storm was located about 8 miles northeast of Tallahassee and was moving east at 25 mph.

People in the warning area should seek shelter immediately.

Another stormy evening, night for the South

FOX Weather meteorologist Ian Oliver details the severe weather forecast for the South as the region endures another day of tornadic storms.

A Tornado Watch has been issued for northeastern Alabama, northwestern Georgia, eastern Tennessee and extreme western North Carolina until 10 p.m. Eastern on Wednesday. Both Knoxville and Chattanooga in Tennessee and Huntsville, Alabama are included in the watch.

People who live in the watch area should prepare for tornadoes, damaging wind and hail with any storms that develop.

A Tornado Warning has been issued for Berkeley County in South Carolina until 5:35 p.m. Eastern on Wednesday.

The storm was located near Pinopolis and was moving east at 25 mph.

People in the warned area should seek shelter immediately.

A Tornado Warning has been issued for the Juno Beach area in Florida until 5:30 p.m. Eastern on Wednesday.

Warnings have been issued for hail and wind in Kentucky, South Carolina, Georgia and Florida.

The FOX Weather 3D Radar is tracking severe thunderstorms from south of Atlanta to northern Florida.

The storms are capable of producing hail, damaging winds, heavy rainfall and some might even spawn a tornado. Over 6 million people from Georgia and South Carolina are under a Tornado Watch because of the threat of rotating storms.

Download the free FOX Weather app to track the storms.

A Tornado Watch has been issued for eastern Georgia and southwestern South Carolina until 11 p.m. Eastern on Wednesday.

The area is just about the same area that was hit hard by tornadoes on Tuesday afternoon.

People who live in the watch area should prepare for tornadoes, damaging wind and hail with any thunderstorms that develop.

A Georgia resident captured the sights of a tornado from Lake Blackshear in Central Georgia. The threat of tornadoes will continue to move eastward through the evening.

VIDEO: Storm chaser has close encounter with tornado in Georgia

A storm chaser had a close encounter with a tornado in Sumpter County, Georgia on Wednesday afternoon. Much of Georgia continues under a Tornado Watch through the evening hours.

A Tornado Warning has been issued for Gadsden and Leon counties in Florida until 4:15 p.m. The storm is expected to remain to the north of Tallahassee as is it moves eastward along the Florida-Georgia border.

The Par 3 Contest at Augusta National is on a weather delay.

Per the Masters broadcast, if they cannot resume play, then all those who finished 4 under will win.

FOX Weather is covering severe thunderstorms across the South. 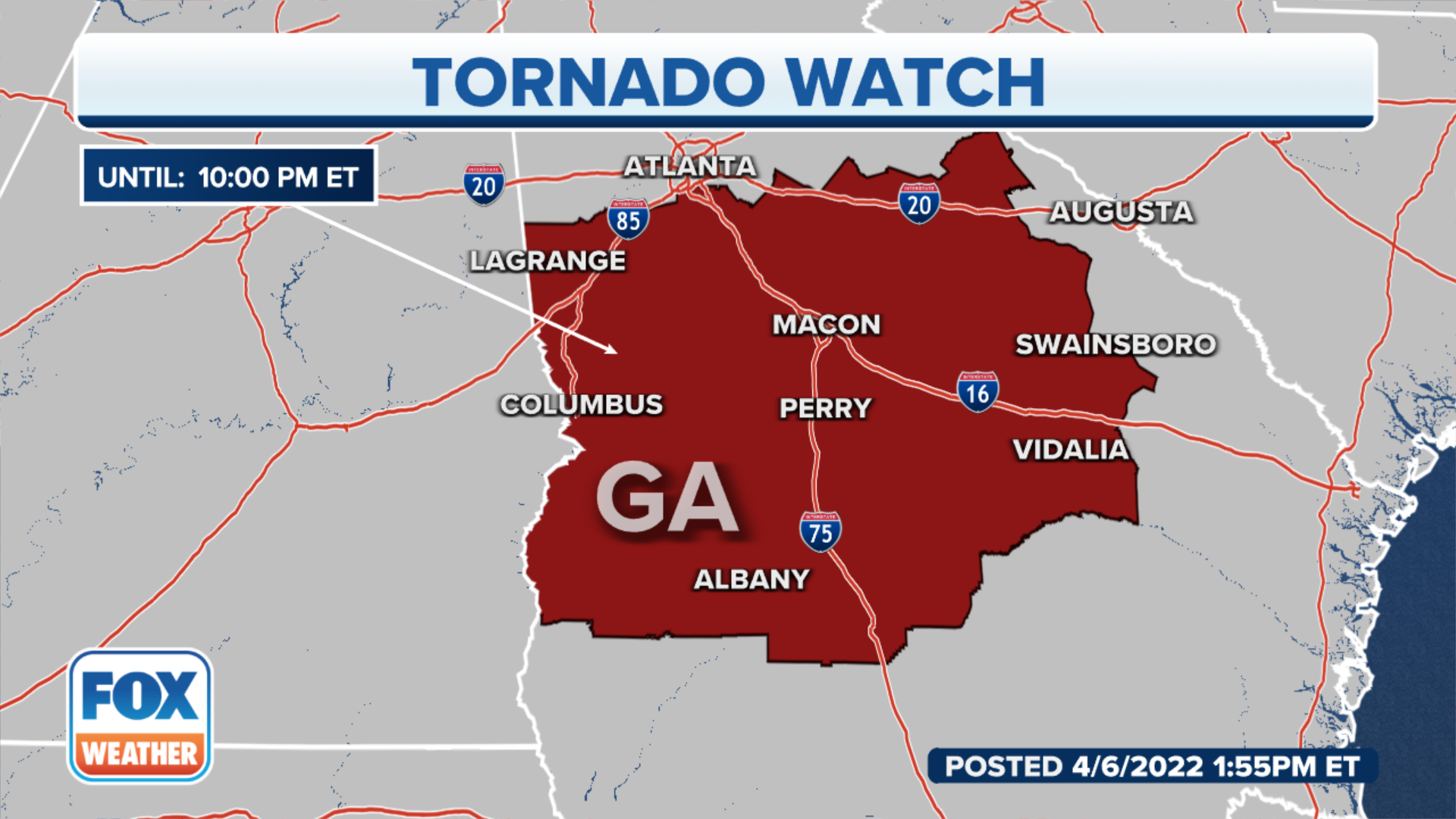 A tornado warning has been issued for Sumter and Crisp counties in Georgia until 4 p.m. Eastern time Wednesday.

According to the National Weather Service, the tornado has been observed and they called it "large and extremely dangerous." People in the warning area should seek shelter immediately.