Orlene is now a tropical storm after making landfall in Mexico as Category 1 hurricane.

Orlene dissipated Monday evening over the mountainous terrain of western Mexico, where it had made landfall as a Category 1 hurricane earlier in the day.

According to the National Hurricane Center, Orlene crashed ashore with maximum sustained winds of 85 mph just north of the Nayarit and Sinaloa border around 7:45 a.m. Mountain time Monday morning.

Orlene made landfall along the western coast of Mexico as a Category 1 hurricane on Monday morning.

Orlene had rapidly intensified into a Category 4 hurricane over the weekend but gradually weakened from Sunday afternoon into Monday morning as it approached the western coast of mainland Mexico. 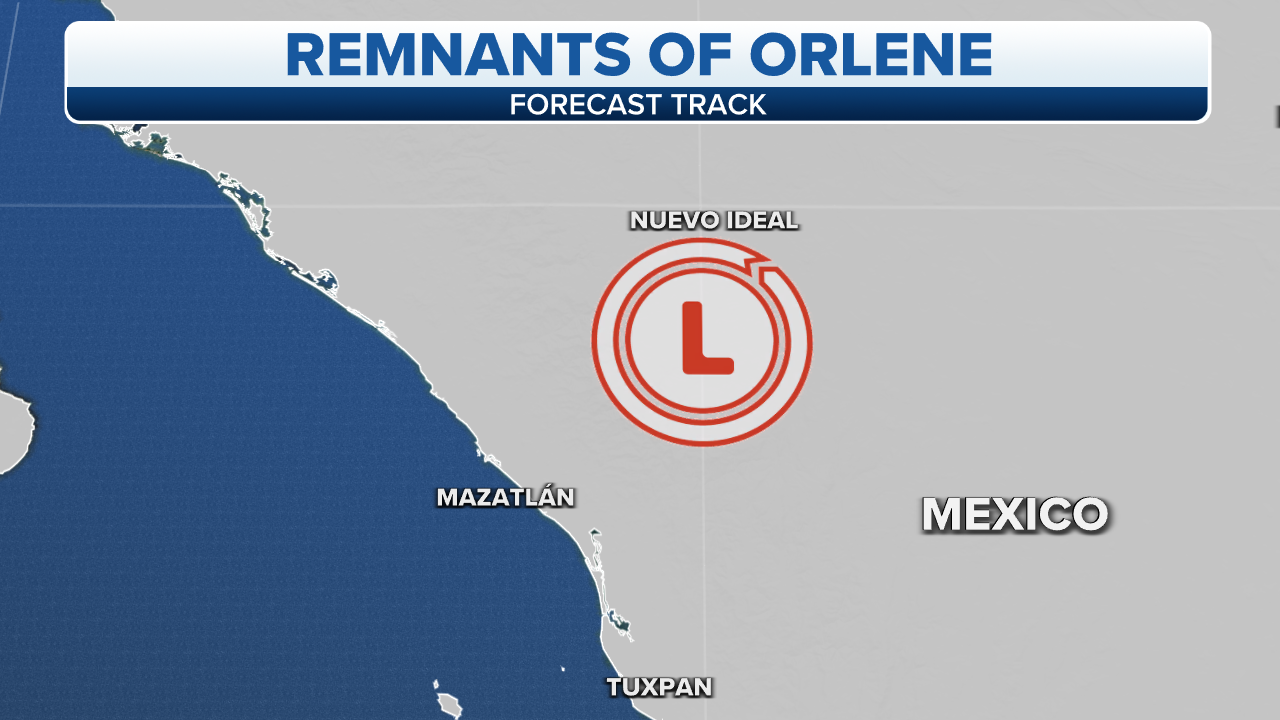 The projected path and intensity of Orlene.
(FOX Weather)

Where is Tropical Depression Orlene Now?

Orlene's circulation dissipated as it moved inland across western Mexico. As of Monday evening, Orlene had maximum sustained winds of 25 mph when the NHC issued its last advisory on the former hurricane.

The remnants of Orlene were centered about 105 miles east-northeast of Mazatlan in Mexico and were moving northeastward at about 6 mph. 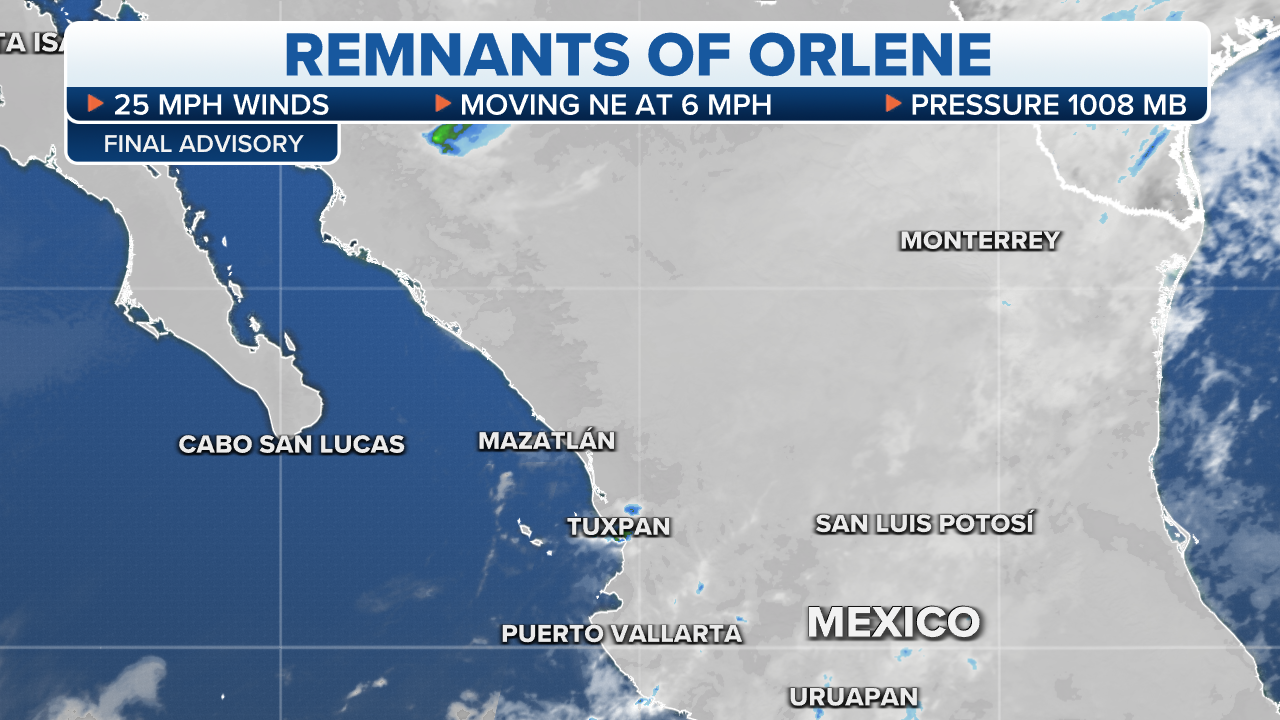 What is the forecast and expected impacts of Hurricane Orlene?

Orlene rapidly intensified into a Category 4 hurricane Sunday morning, but the storm has been on a weakening trend since then and went on to make landfall as a Category 1 hurricane along the western coast of mainland Mexico on Monday morning, then was downgraded to a tropical storm just a few hours later.

In addition to high winds, Orlene was expected to dump 3 to 6 inches of rain along its path through Tuesday. Localized rainfall amounts as high as 10 inches were possible in northern Nayarit and southern Sinaloa states.

Heavy rain was even predicted to spread into southwestern Durango state, where 1 to 3 inches was forecast with localized amounts up to 5 inches. 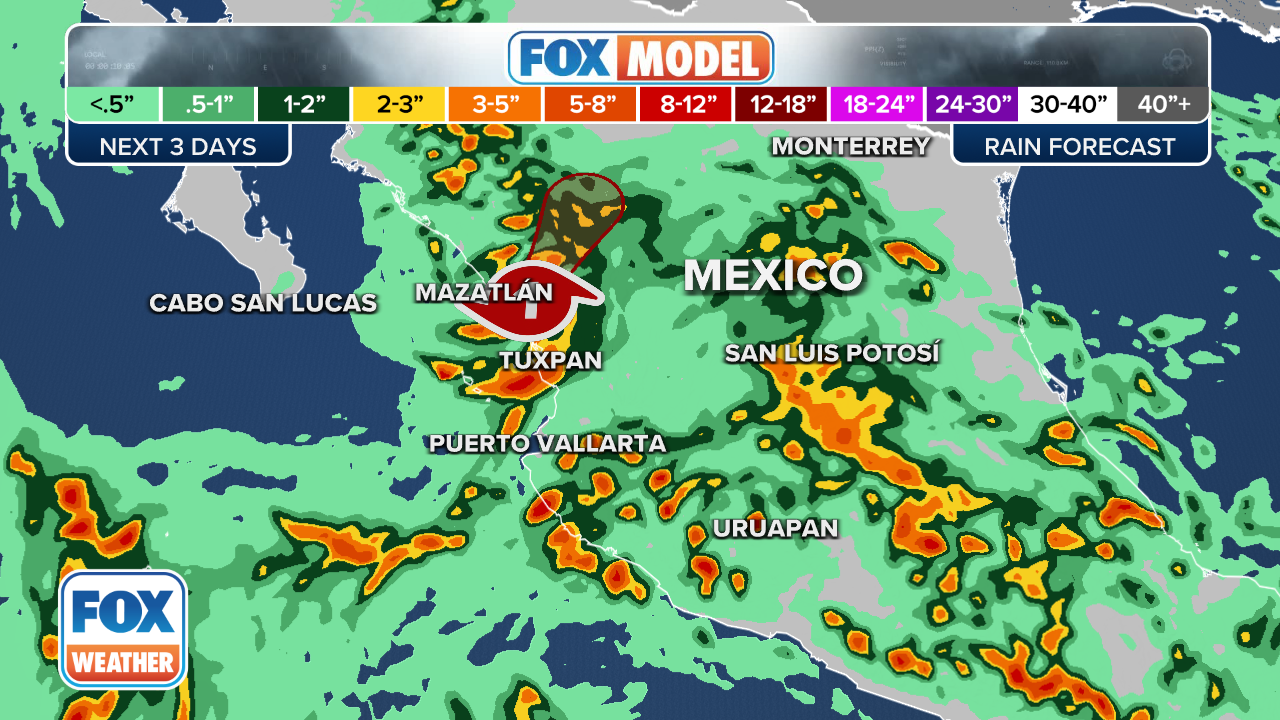 Rainfall forecast from Orlene in Mexico from the exclusive FOX Model.
(FOX Weather)

These rainfall amounts were expected to result in flash flooding, as well as possible landslides in areas of rugged terrain.

"This system will continue to push inland, but then it runs into that mountainous terrain and it really just kind of falls apart, but beforehand, we're going to see … rainfall amounts up to 5 to 10 inches in this region in part of Mexico," FOX Weather meteorologist Jane Minar said.

A dangerous storm surge was also expected to cause coastal flooding along the western coast of mainland Mexico, particularly in regions of strong onshore winds, through Monday afternoon.