The Washburn Fire continues burning for a sixth day with 3,772 acres scorched. The blaze is only 17 percent contained as of Wednesday evening.

YOSEMITE NATIONAL PARK, Calif. – President Joe Biden has been briefed on the large wildfire burning in Yosemite National Park as efforts to contain and extinguish the blaze continue for the sixth day. 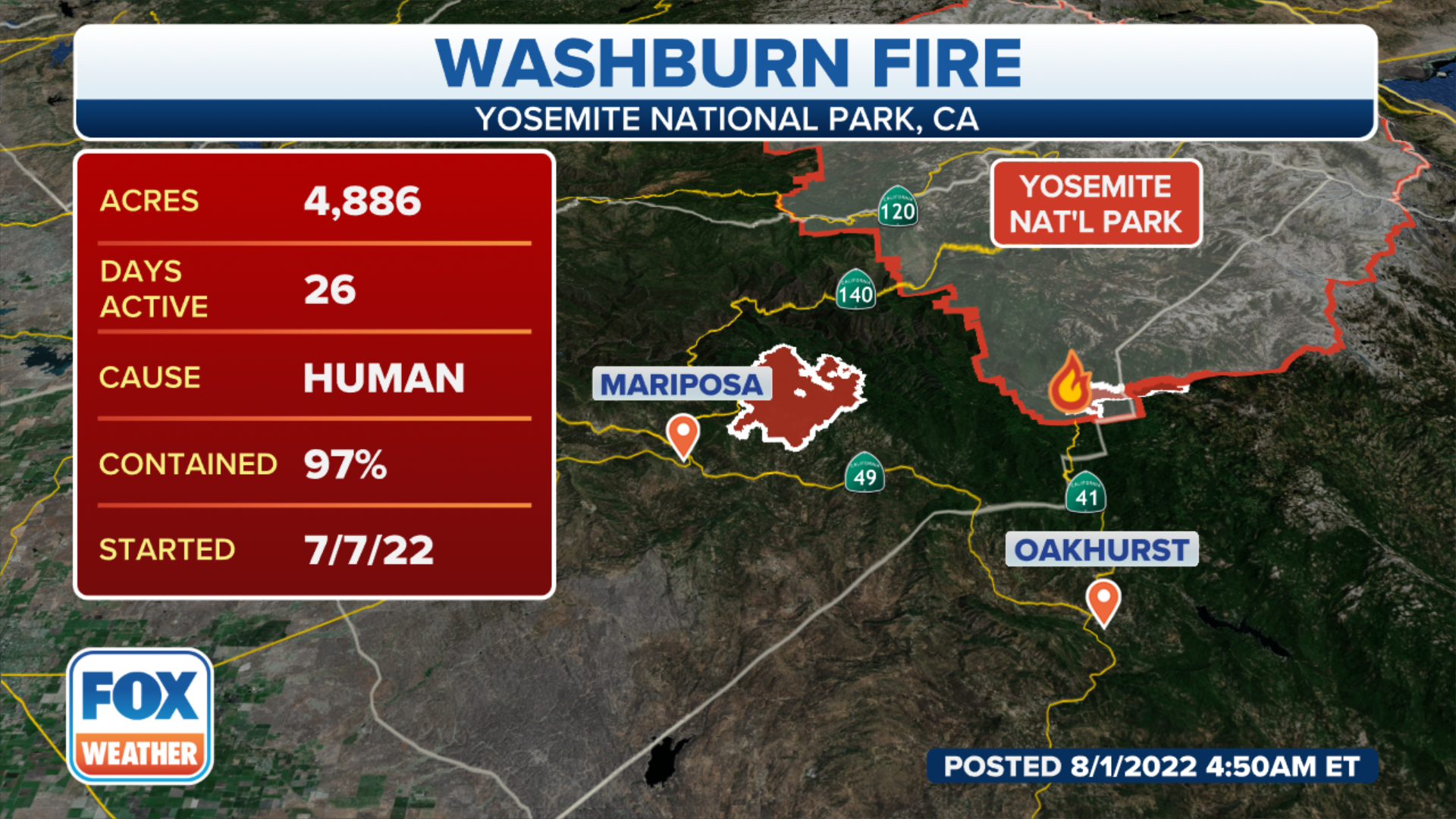 As of Wednesday morning, the Washburn Fire has scorched 3,772 acres of land and containment levels dropped to 17%.

Hundreds of firefighters, along with aircraft and bulldozers, have been working tirelessly to extinguish the Washburn Fire ever since it broke out on July 7.

This isn't only because flames threaten structures and homes of people living in the area but also to protect a national treasure.

Firefighters are taking multiple measures to help fight the Washburn Fire including installing sprinklers to protect their most sacred sequoias.

The fire broke out near the Mariposa Grove, which is home to hundreds of massive sequoia trees, including the famous Grizzly Giant that stands hundreds of feet tall and is nearly 3,000 years old.

To protect the Grizzly Giant and other trees, firefighters installed sprinklers to keep the giant sequoias from burning.

"We're trying to give it some, you know, preventative first aid," Yosemite Fire and Aviation Management said on Saturday.

On Wednesday morning, White House assistant press secretary Abdullah Hasan tweeted that Biden has been briefed about the situation unfolding inside one of the country's most beautiful national parks.

He said efforts to protect the sequoia trees and historic structures would continue by removing hazardous fuels, utilizing sprinklers and using wraps around the base of trees to deflect the flames.

"We are grateful for the brave and swift work of federal, state and local first responders who are working around the clock to suppress this fire," Hasan tweeted.

Fire officials said that while sections of the fire cannot be fought head-on by crews due to safety risks for firefighters, much of the rest of the fire is being successfully suppressed.

"Fire lines are being strengthened, unburned fuel in the path of the fire is being burned to starve the fire and hot spots are being cooled," officials said in their daily update.

Hundreds of firefighters, along with aircraft and bulldozers, have been working tirelessly to extinguish the Washburn Fire. Stanley Bercovitz, U.S. Forest Service spokesperson, provides the latest update on the wildfire.

Officials also said that areas that have been evacuated because of the fire would be monitored and safeguarded. As soon as it's determined to be safe, those areas will be reopened to allow residents to return home.

Several roads within Yosemite National Part remain closed, as well as the south entrance to the park.