Yellowstone River knocks out a key piece of infrastructure that connects Livingston, Montana to Yellowstone National Park. FOX Weather’s Max Gorden on how the flooding may impact Montana businesses.

LIVINGSTON, Mont. - Heavy rain and rapid snowmelt have led to unprecedented flooding along the Yellowstone River, which forced the closure of entrances to Yellowstone National Park until the water recedes and damage assessments can be completed.

Numerous roads have been washed away, bridges have been destroyed, and mudslides have covered roads with rocks and debris.

The Yellowstone River, the longest free-flowing river in the United States, reached historic levels Monday and Tuesday, washing away homes and stranding residents living near the national park.

As of Wednesday morning, the National Weather Service in Billings, Montana, said the Yellowstone River at Billings remains above major flood stage, reaching at least 16.02 feet.

The NWS said it's unknown how high the river is due to the flood water impacting the gauge.

The river has remained above record levels since Tuesday afternoon, and there's no indication at this time that water has started to recede.

Drone video taken by Paradise Valley Aerials shows floodwaters stretching across the valley, including in the towns of Pine Creek and Pray.

The National Park Service closed all entrances to Yellowstone National Park on Monday after the historic flooding began, and officials warn that the damage is so severe that the northern parts of the park and other major sections could be closed well into the busy tourism season.

It's estimated that 10,000 people were visiting the park when the flooding started, but all have safely been evacuated, with the exception of a small group of backpackers.

The National Guard is continuing to assist with search and rescue operations across the region and on Wednesday afternoon the Department of Defense's Outreach team said helicopters were able to evacuate 87 people to safety over a period of 41 hours.

No injuries or deaths have been reported.

The NWS said the water is expected to begin receding in Yellowstone County in Montana, but water levels will continue to rise downstream in Treasure and Rosebud counties.

The high water is forecast to flow from Treasure County on Wednesday morning and afternoon into Rosebud County later in the day Wednesday into Thursday morning.

So far, the NWS says flooding is not expected in Forsyth, Montana, because of its flood protection system. 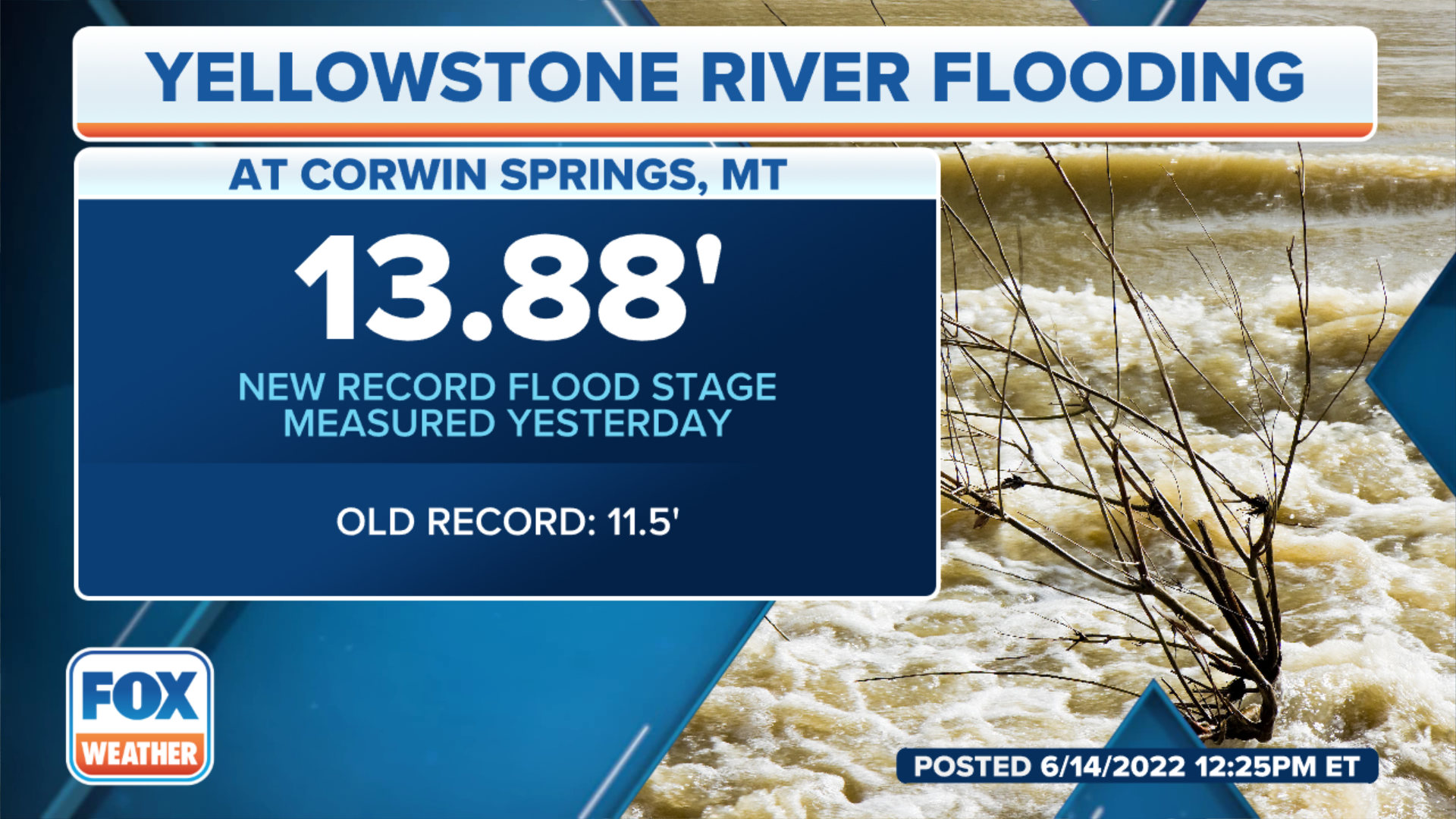 Historic flooding has been reported on the Yellowstone River.
(FOX Weather)

The Yellowstone River at Corwin Springs in Montana reached its highest level ever, 13.88 feet, on Tuesday. That shattered the previous record of 11.5 feet set more than 100 years ago in 1918.

A rockslide at Yellowstone National Park was caught on video.

Flood Warnings continue for the Yellowstone River through Treasure and Rosebud counties, and the NWS warns of more significant flooding across the region.

"Areas without flood protection (levees) should prepare for significant flooding exceeding the 1997 and 2011 floods," the NWS tweeted.

Senator of Montana: 'Never seen flooding like this' at Yellowstone

Montana Sen. Steve Daines joined FOX Weather on Wednesday morning and said he was working with the government in order to get the resources needed in order to rebuild.

"We're working with the governor of Montana, Gov. Greg Gianforte, he's declared the state a disaster area," he said. "We will work with him to make sure we get a federal designation disaster. That will expedite a couple of things. One is helping the families that have lost, in some cases everything, to make sure they can rebuild. And number two, to get quickly on top of the bridges and the roads, the infrastructure that has been washed away."

He said the National Park Service is working as fast as possible first to protect the safety of visitors and to assess the damage to get a plan together to start the rebuilding efforts.

"We will rebuild," Daines said. "We'll have better roads and better bridges than we've had before, it will just take some time."

"My office and I will continue to work closely with the National Park Service and Department of Interior to ensure we provide maximum resources and support to repair damaged roads, bridges and infrastructure throughout the park," she said.