More record lows are possible Wednesday morning across the Great Lakes in cities such as Milwaukee, Green Bay, WI and Flint, MI.

People living along the Great Lakes and into the Ohio Valley and Northeast may have heard their heaters click on Wednesday morning as cold air rushes across the region. 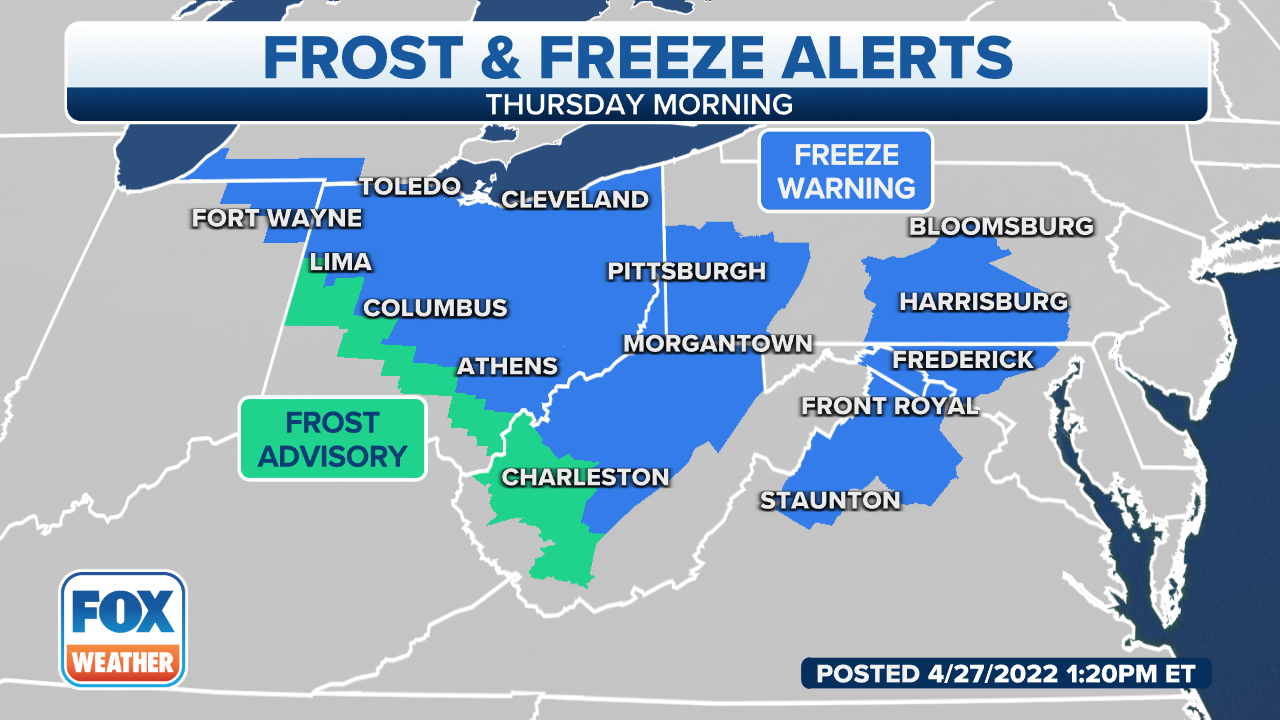 Frost and freeze alerts have been issued for Wednesday and Thursday mornings as temperatures are expected to dip into the 20s to start the day.

Freeze Warnings were issued from eastern Iowa across the Great Lakes region, including Chicago and Cleveland, and into western Pennsylvania.

Frost Advisories are also in effect for most of Illinois, southern Indiana, including Indianapolis, southwestern Ohio, most of Kentucky and southwestern West Virginia.

Freeze Watches have been posted for northern Virginia, western Maryland and south-central Pennsylvania. 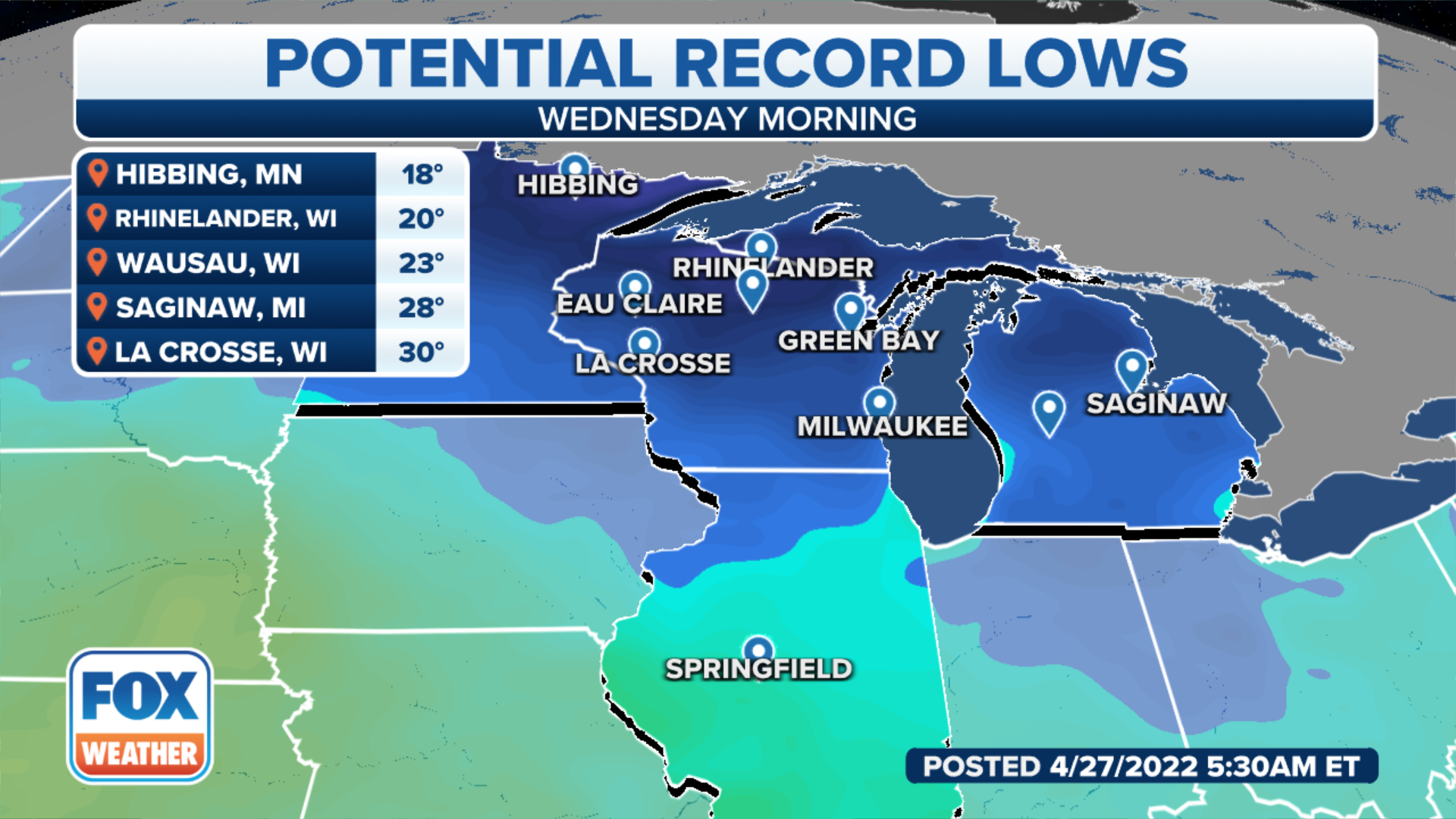 And while the frost and freeze alerts don't include the upper Midwest and upper Great Lakes, it will still be a cold start to the morning with record-low temperatures in jeopardy of being broken.

In Hibbing, Minnesota, temperatures could fall into the upper teens, which would break a record there. Many areas across Wisconsin and northern Michigan could also see records fall. 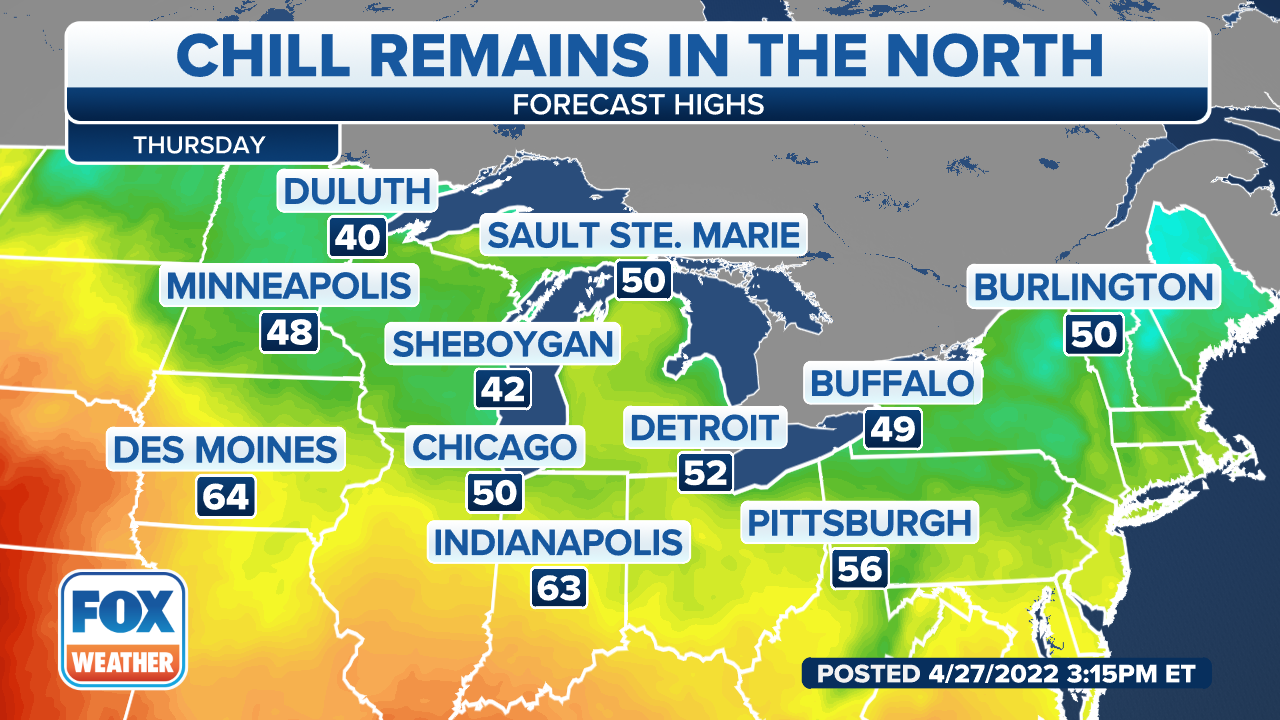 After the cold start of the day, temperatures are expected to rise, but not by much.

Temperatures will stay in the mid- to upper 30s in the Midwest and upper Great Lakes, with temperatures getting into the 40s from Chicago into Detroit and Pittsburgh.

There is a sharp cutoff to the mild air, however. Des Moines, Iowa, and Indianapolis will get into the 60s during the day. 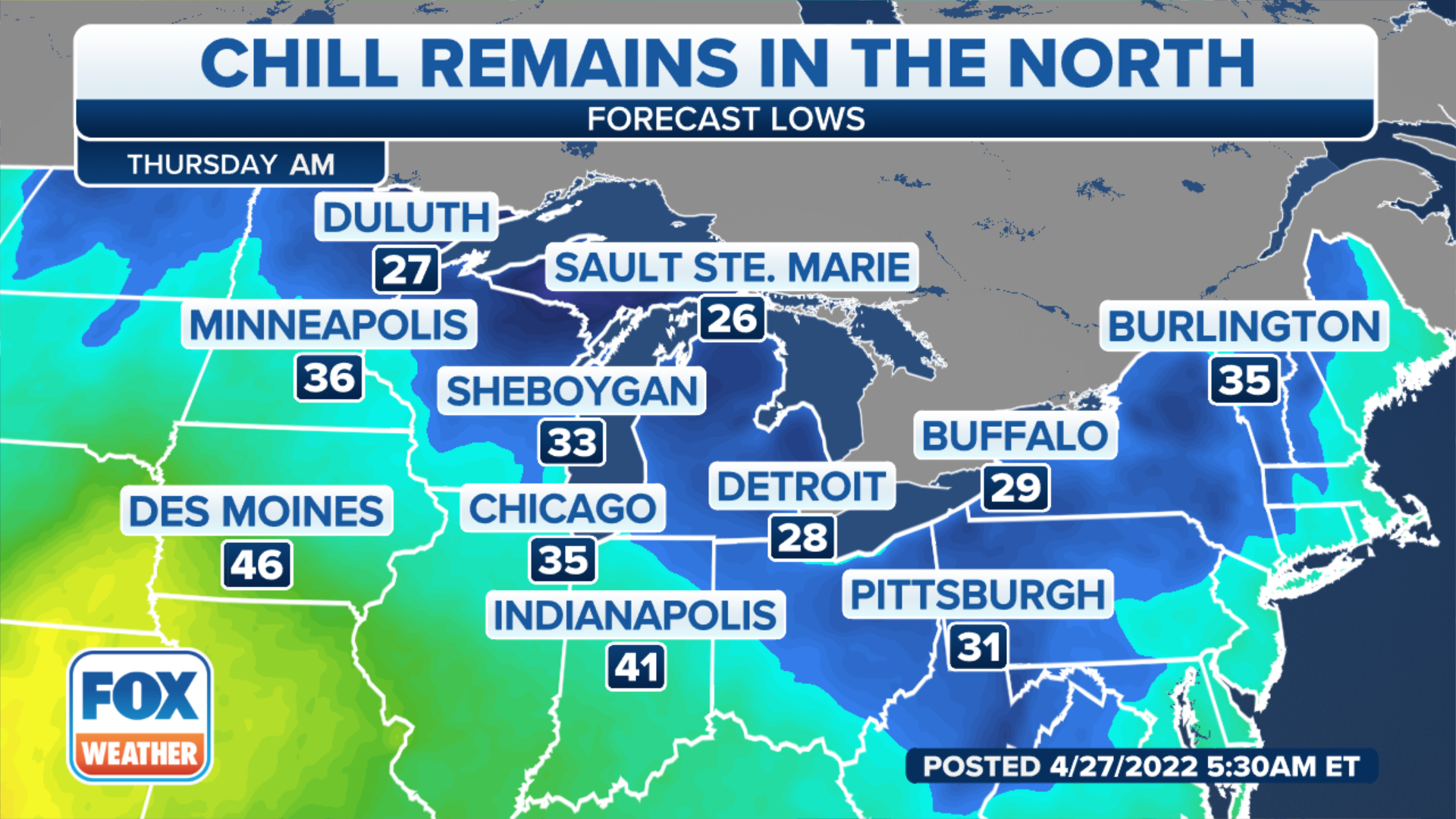 The cold air will then shift to the east by Thursday morning, with many of the same areas that saw cold air Wednesday morning dropping below freezing to start the day.

The cold air will also dip as far south as West Virginia and Virginia and extend into the Northeast and northern New England. 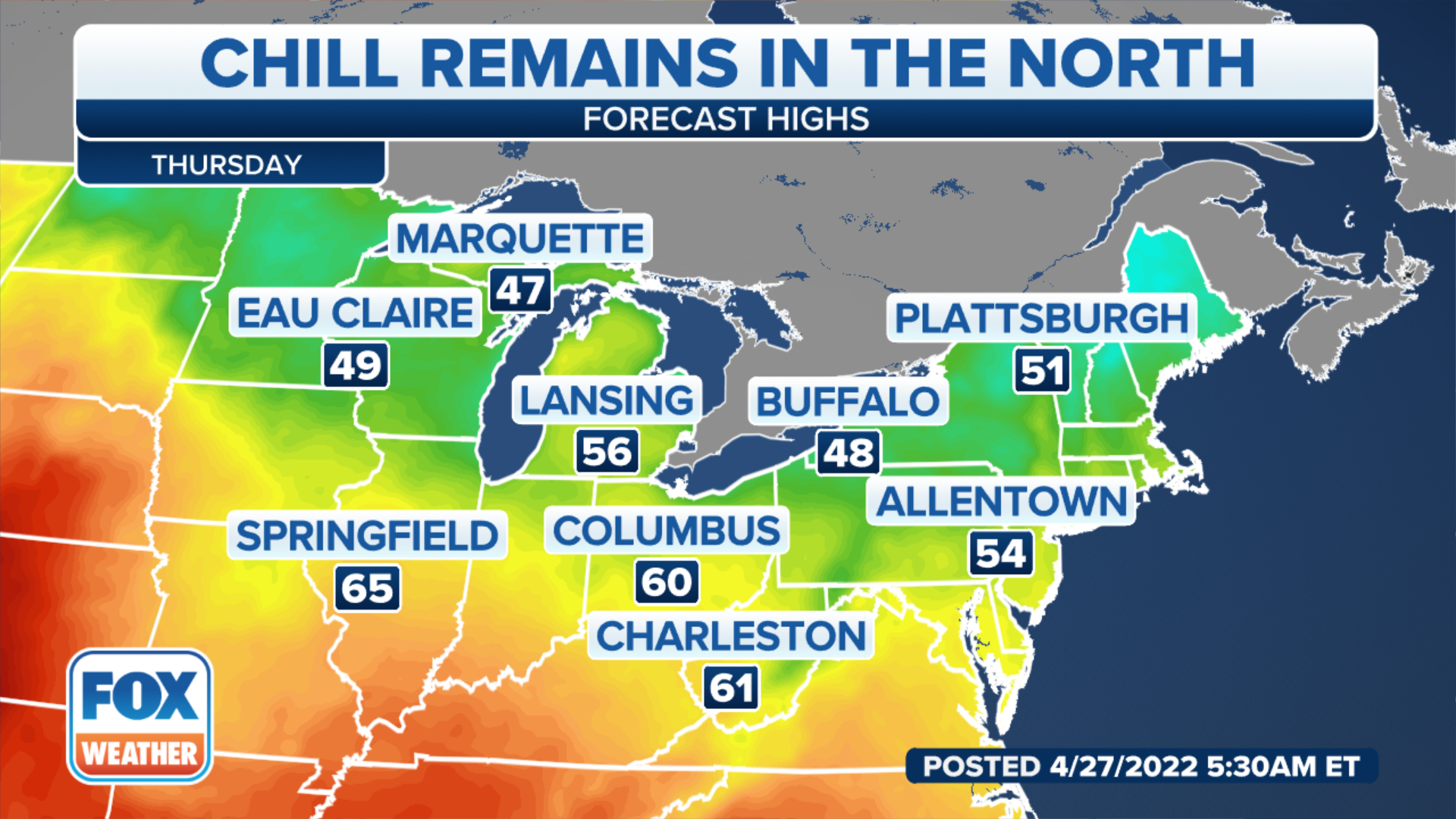 Temperatures will rebound as we get into Thursday afternoon, with temperatures rising into the upper 40s from Wisconsin across the Great Lakes and into the Northeast.

Farther south in the mid-Atlantic, temperatures will get into the 50s, with warm air also moving back into the Mississippi and Ohio valleys. 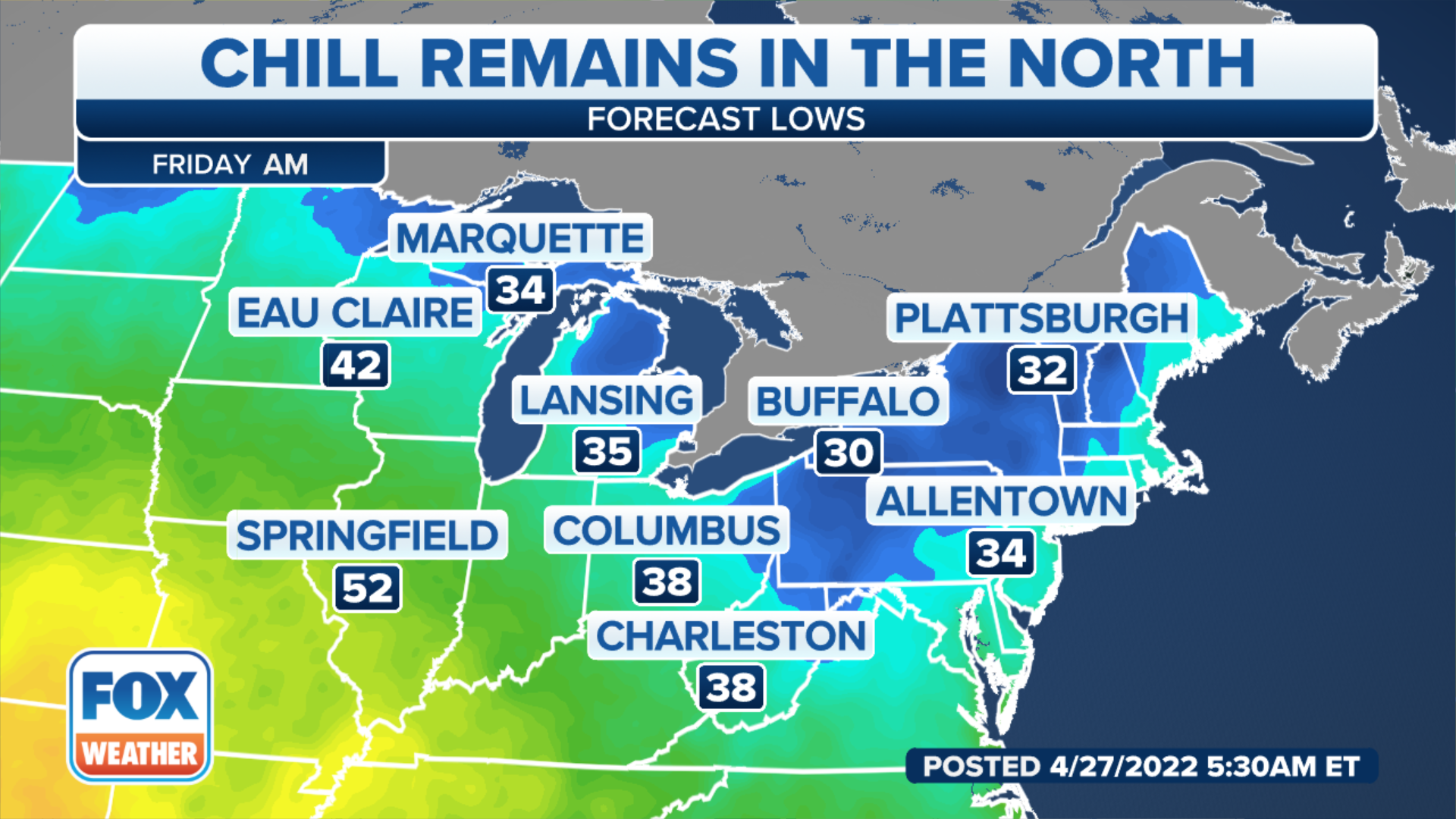 The cold air will begin to retreat to the north, with areas of the Northeast and New England seeing the coldest morning temperatures on Friday.

Many areas, like Buffalo and Plattsburgh, New York, will start the day below freezing. Even parts of New England could get to the freezing mark on Friday morning. 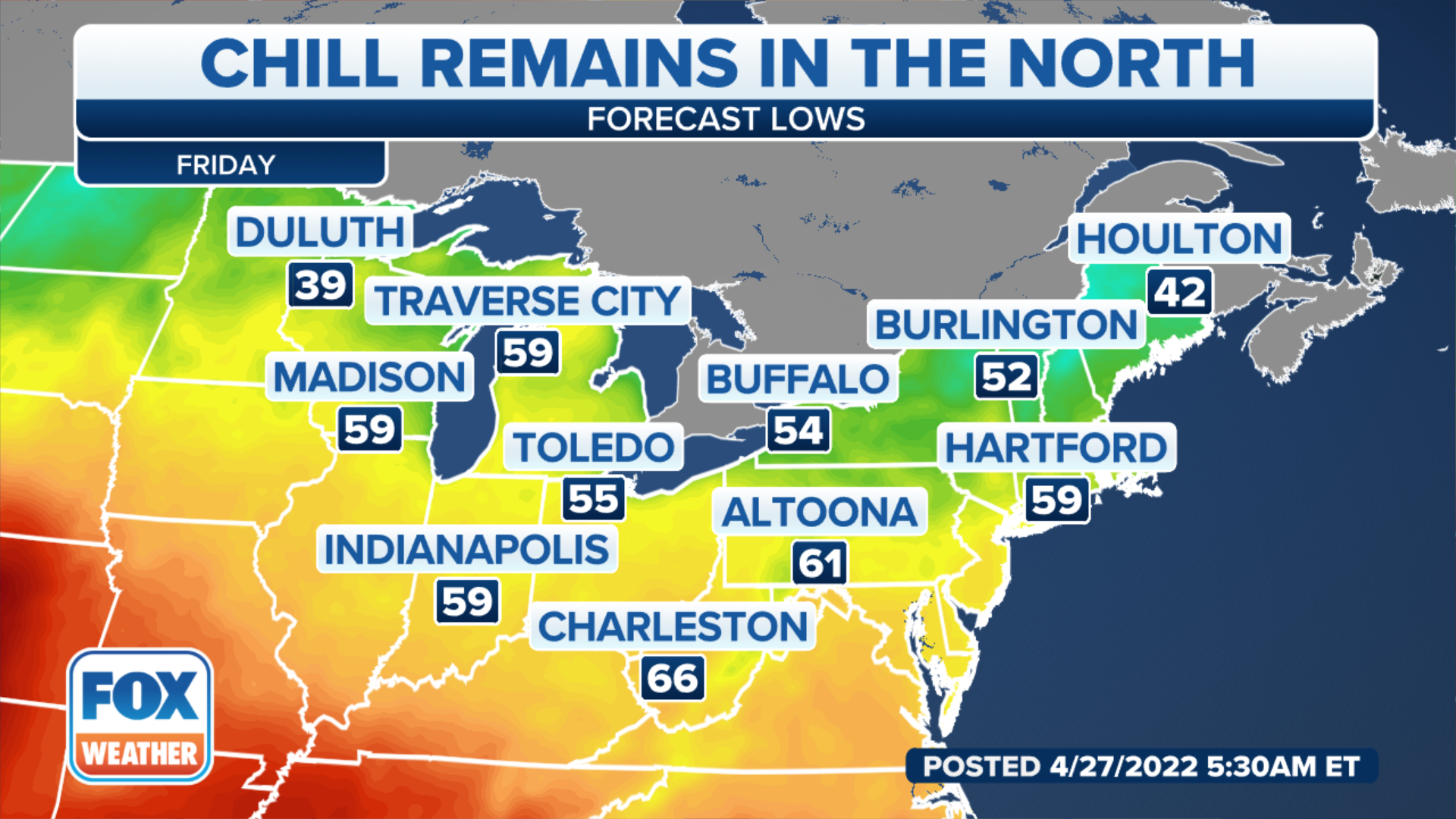 During the day on Friday and into the afternoon, temperatures will jump about 20 to 30 degrees, with the interior Northeast and parts of northern New England getting into the 50s.

Hartford, Connecticut, and southern New England could get close to 60 degrees.