Josephine County Sheriff Dave Daniel on the challenges facing Oregon fire crews in the air and on the ground. So far, the Rum Creek Fire has burned close to 13,000 acres and only 1% of the blaze is contained.

MERLIN, Ore. – Nearly 2,000 firefighters in Oregon are working around the clock to halt the spread of the Rum Creek Fire that has scorched nearly 13,000 acres of land in the southwestern part of the state near the border with California.

Oregon Gov. Kate Brown declared a state of emergency on Saturday in response to the deadly wildfire, which first began on Aug. 17 after a lightning strike. 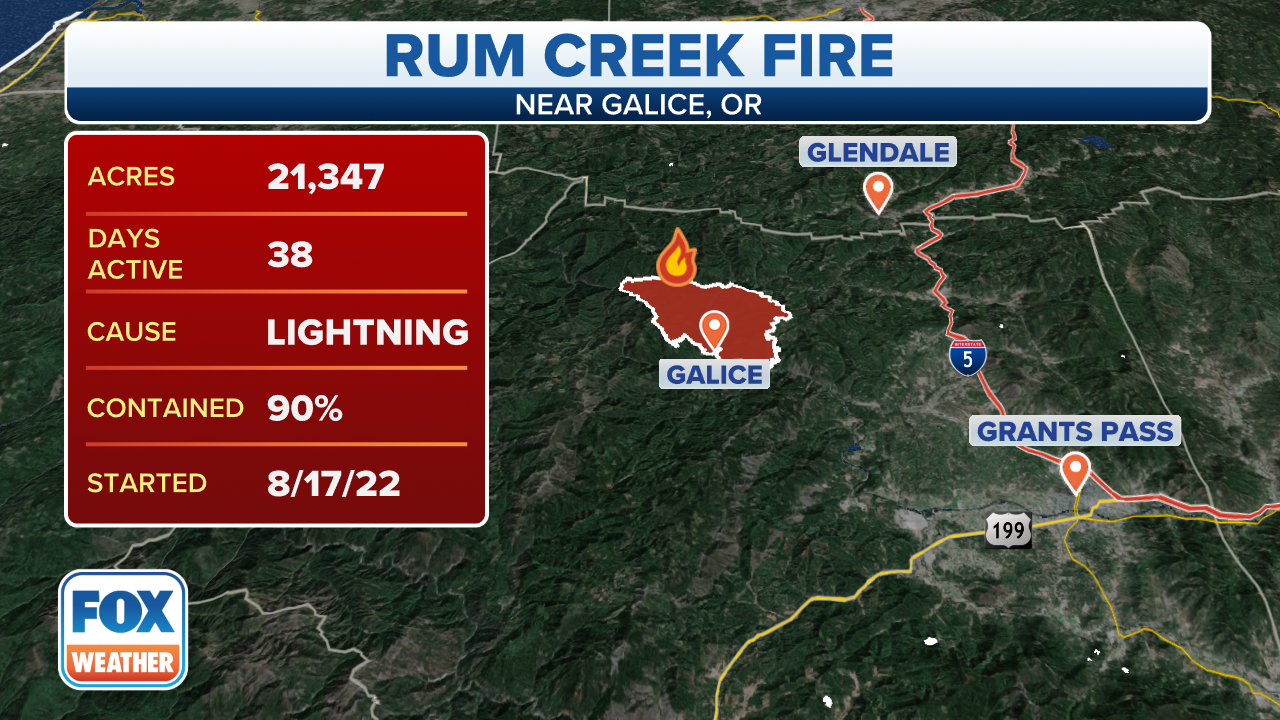 The latest information on the Rum Creek Fire in Oregon.
(FOX Weather)

As of Wednesday, the Rum Creek Fire has burned 12,916 acres of land and is only 1 percent contained.

At least three buildings, including a home, have been destroyed, and four people have been injured.

Tragically, one firefighter was killed the day after the Rum Creek Fire began.

Firefighter Logan Taylor, 25, was working to extinguish the fire when he was hit by a falling tree. He was airlifted to a hospital to be treated for his injuries but later died.

The Rum Creek Fire in Oregon is now 12,916 acres and still only 1% contained.

"We are extremely saddened by the passing of Logan Taylor," said Tyler McCarty, of the Oregon Department of Forestry, in a Facebook post. "This loss is deeply felt by our ODF family and throughout the wildland fire community as a whole."

The Rum Creek Fire burning in Oregon near the California border has so far burned more than 10,000 acres.

In addition, four additional structural protection teams arrived at the site on Tuesday, and they will assist the Oregon State Fire Marshal's Office in protecting homes and other structures in Galice and Rand.

Aviation resources are also being used at night by using infrared cameras to "see" through the smoke to get real-time information about the Rum Creek Fire's perimeter.

The Josephine County Sheriff's Office has issued several evacuation orders and notifications for people living near where the Rum Creek Fire is burning.

But the Wild section of the Rogue River below Grave Creek will remain open unless fire conditions worsen. Officials said the river's status is determined on a day-by-day basis.