Sunny and partly cloudy conditions are in store for CO, IL, NY, OK and UT as they have their primary elections on Tuesday.

The midterm elections are here, and voters in five states across the country will cast their ballots on Tuesday for whom they'd like to see in local, congressional and state leadership positions.

Unlike other primaries that saw severe weather as voters were heading to the polls, today's weather will have a mix of sun, clouds and some hot temperatures.

Let's take a closer look at each of the five states holding primaries on Tuesday. 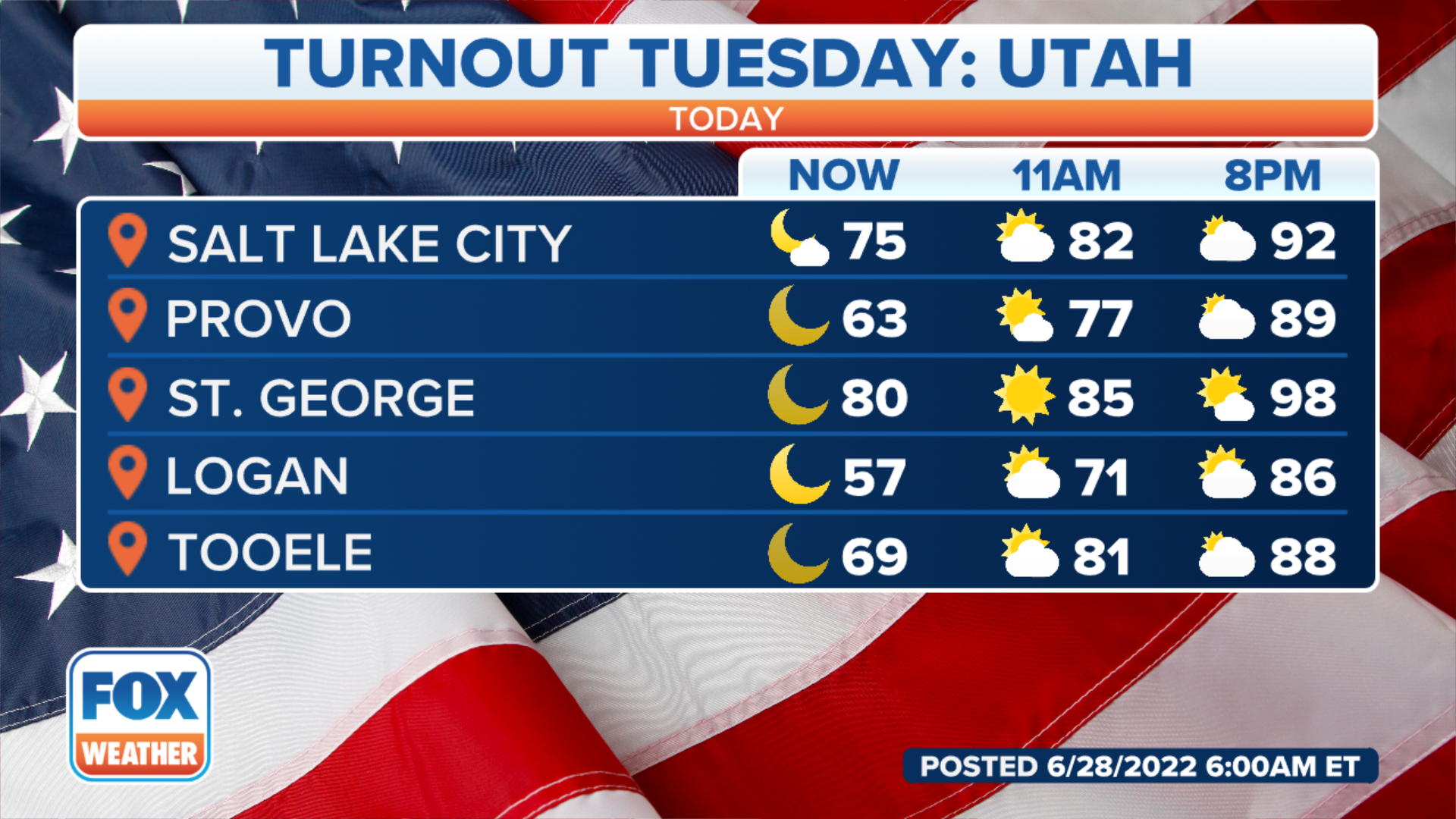 The weather across Utah is looking like it will cooperate for the most part on Tuesday, although it will be hot.

By lunchtime, temperatures will range from the low 70s in Logan, upper 70s in Provo and low 80s in Salt Lake City and Tooele.

As the day continues, temperatures will continue to rise.

St. George will get close to 100 degrees, while the rest of the region will see high temperatures in the evening in the upper 80s or low 90s. 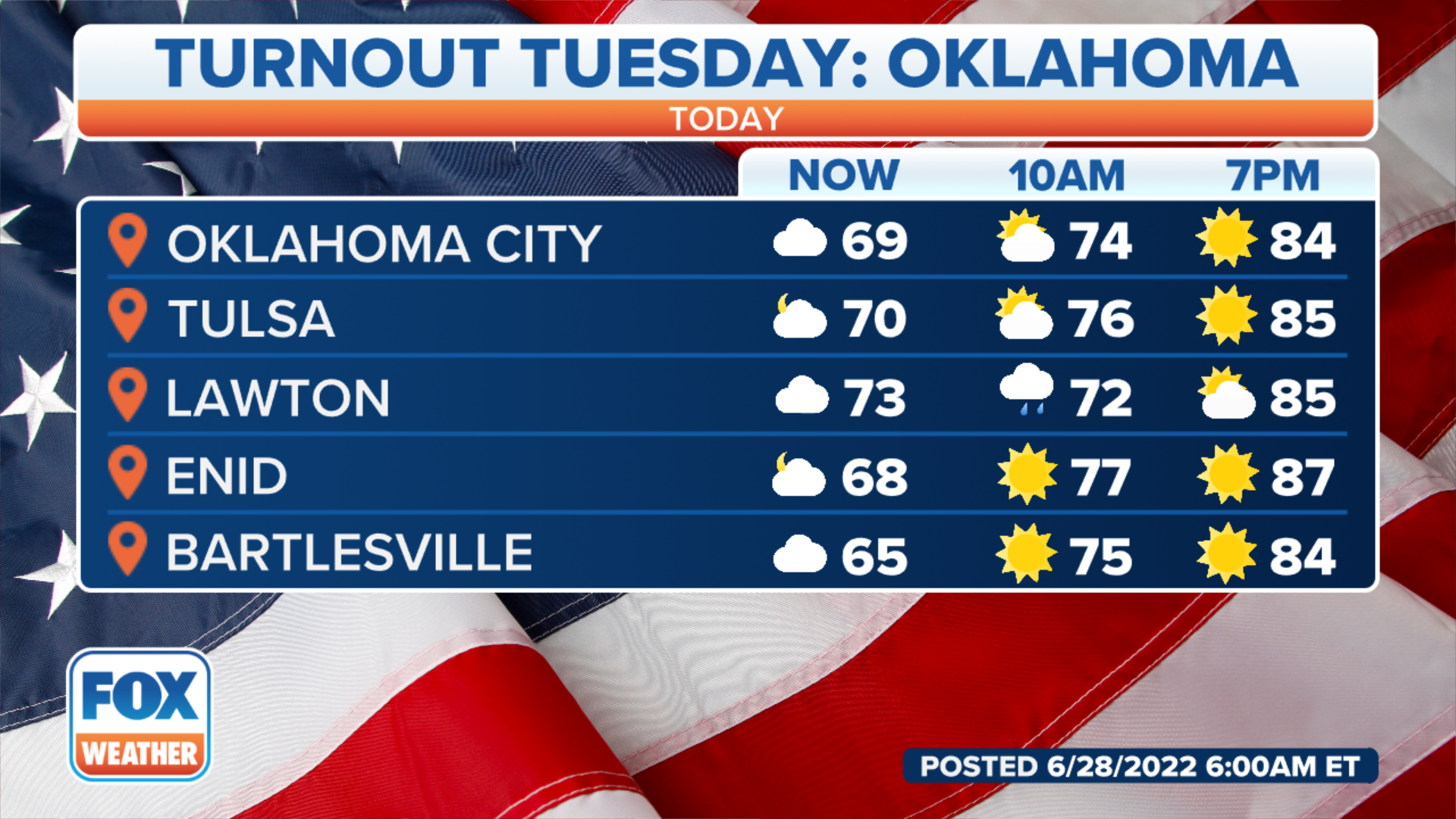 The weather forecast in Oklahoma on Tuesday, June 28.
(FOX Weather)

As we take a look at Oklahoma, it looks like the theme of the day will also be plenty of sunshine and warm temperatures for most locations.

Lawton saw some clouds earlier in the morning, and there is a chance of some showers around lunchtime. But then will be peeks of sunshine as we get into the evening hours.

In Oklahoma City, temperatures are expected to range from about 70 degrees in the morning to about 84 degrees by the time we get into Tuesday evening.

It will also be warm in Enid, which has a forecast high temperature of about 87 degrees by 7 p.m. 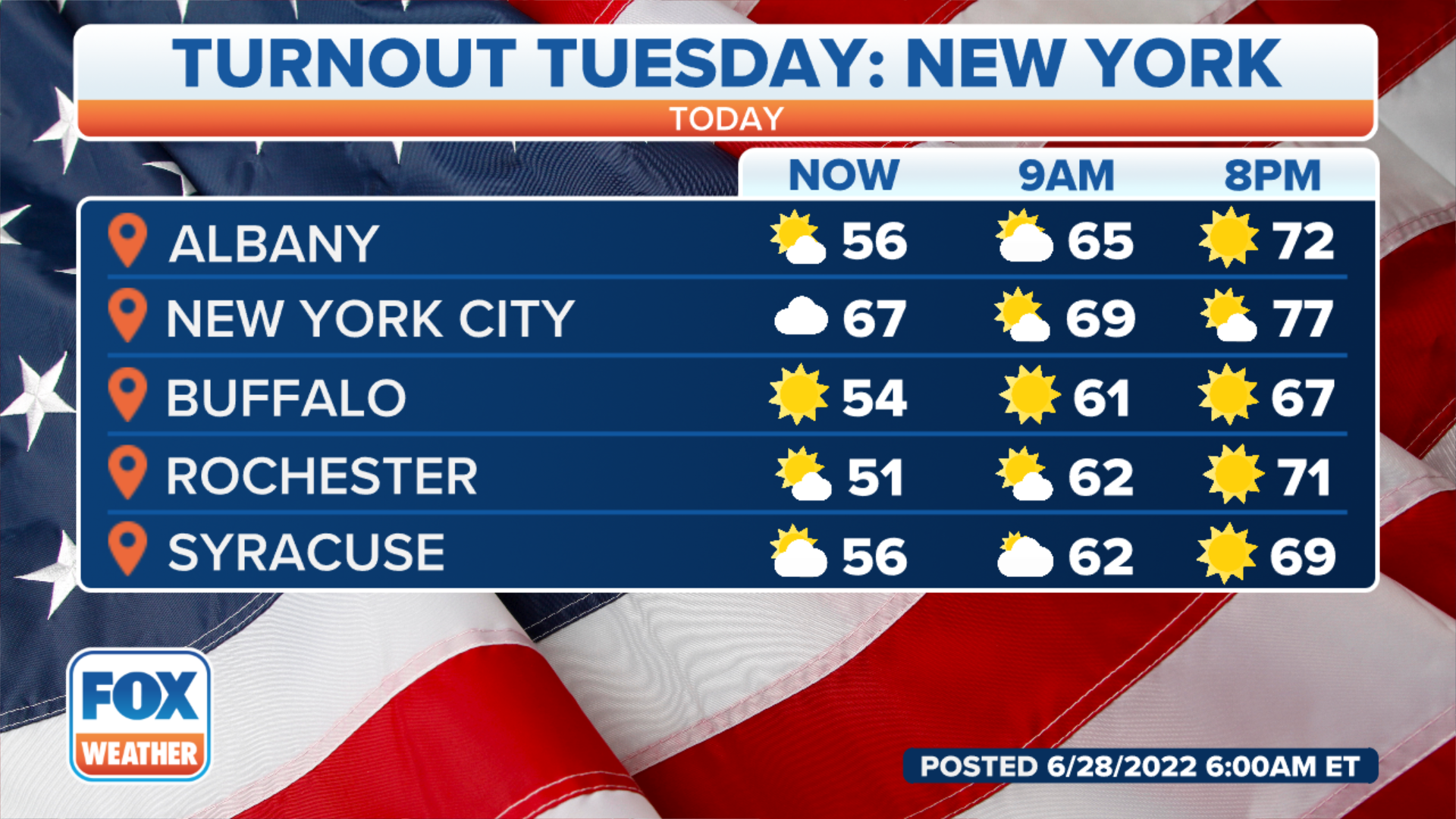 Heading east to New York, temperatures won't be as warm as they are in the central part of the country.

Albany will see plenty of sunshine during the day, and it is expected to be about 72 degrees as we get to around 8 p.m.

New York City will also see sunshine with some clouds rolling by. The Big Apple is expected to be about 77 degrees later in the evening.

In Buffalo, temperatures won't be quite as warm. The area should be around 67 degrees by 8 p.m. 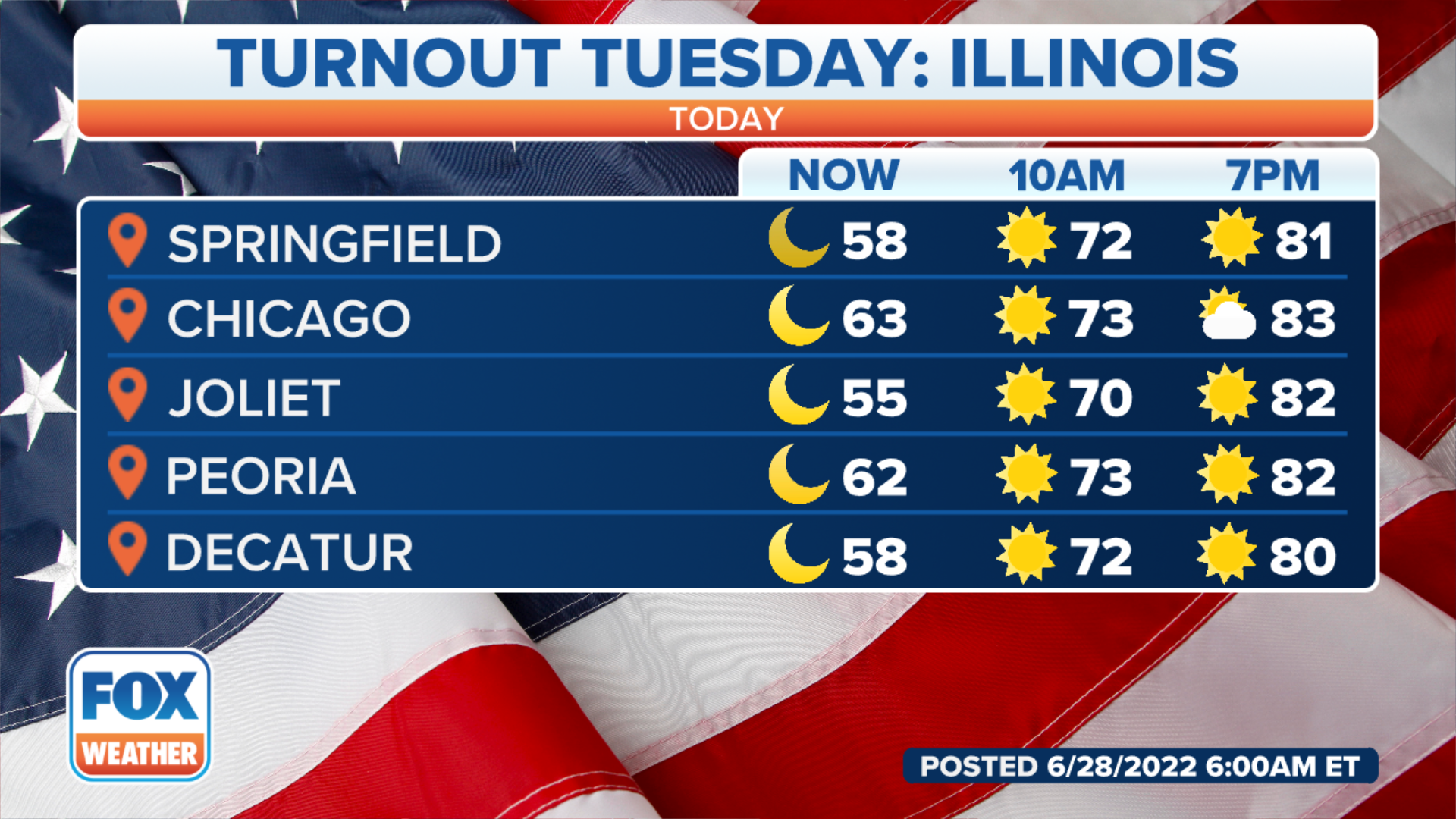 The weather forecast in Illinois on Tuesday, June 28.
(FOX Weather)

Most areas of Illinois will have plenty of sunshine during the day, but some areas around Chicago may see some clouds roll by.

Chicago will see a temperature of around 72 degrees later in the morning and will be about 10 degrees warmer by about 7 p.m.

Springfield, Joliet, Peoria and Decatur will all see temperatures in the low 70s during the day and rising into the low 80s in the evening. 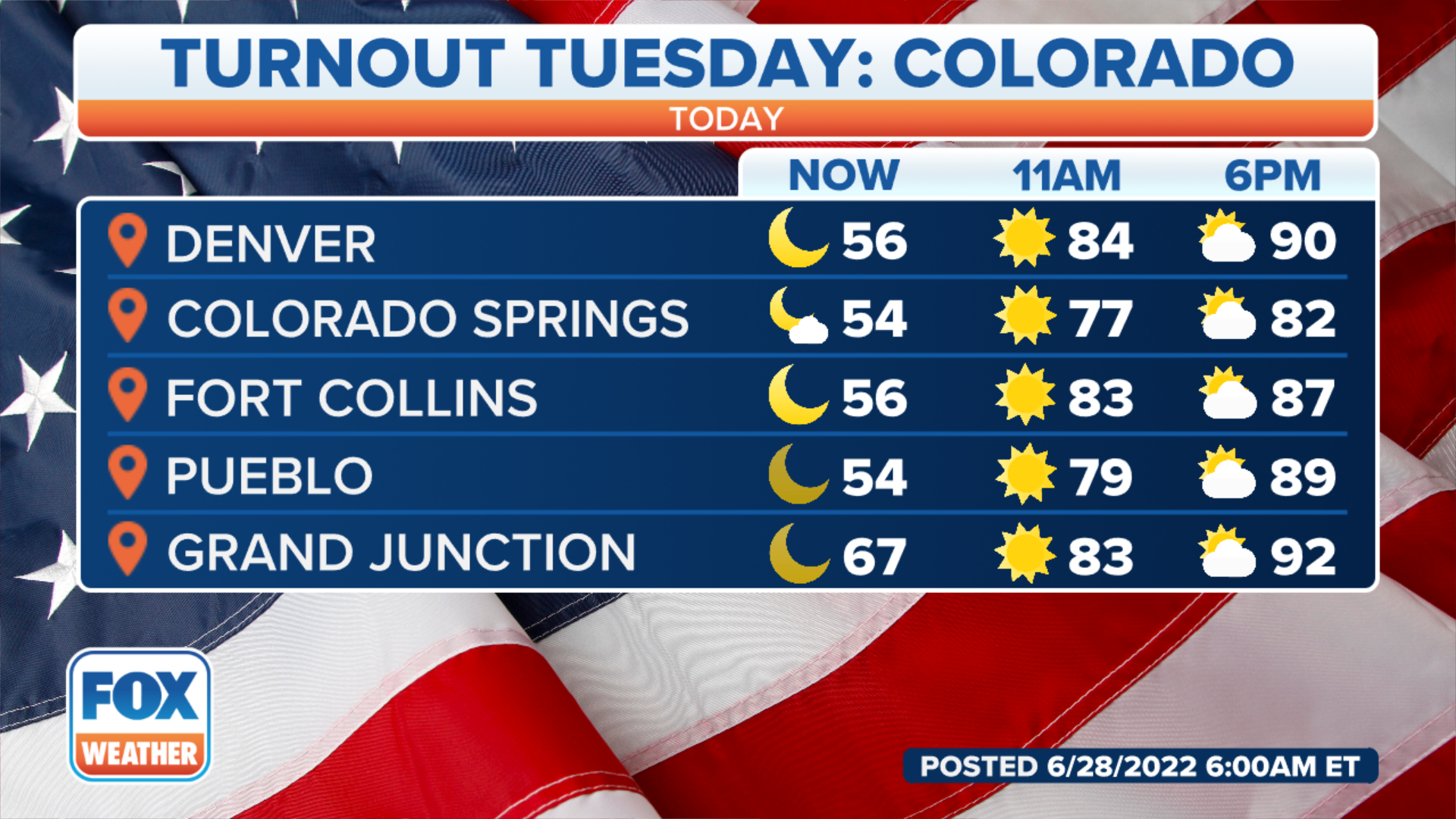 The weather forecast in Colorado on Tuesday, June 28.
(FOX Weather)

It will also be a warm day in Colorado.

The morning started off cool, with temperatures generally in the low to mid-50s, but most places will jump into the upper 70s to low 80s by around lunchtime.

The heating will continue during the day, and temperatures will range from about 80 degrees in Denver, Pueblo and Grand Junction to the 80s in Colorado Springs and Fort Collins.

Be sure to download the FOX Weather app to check the forecast in your area and to receive potentially life-saving weather alerts, if any are issued by the National Weather Service. The free FOX Weather livestream is also available 24/7 on the website and app and on your favorite streaming platform. The FOX Weather Update podcast also provides weather information for the entire country.