Cloudy and sunny skies in store for primary elections in ID, KY, NC, OR, PA

Voters in ID, KY, NC, OR and PA to be met with sunshine and clouds as they head out to cast their ballots for primary elections.

The midterm elections are here, and voters in five states across the country will cast their ballots on Tuesday for whom they’d like to see in local, congressional and state leadership positions.

Unlike other primaries that saw severe weather as voters were heading to the polls, the weather seems like it will cooperate.

Here’s the forecast for all five states. 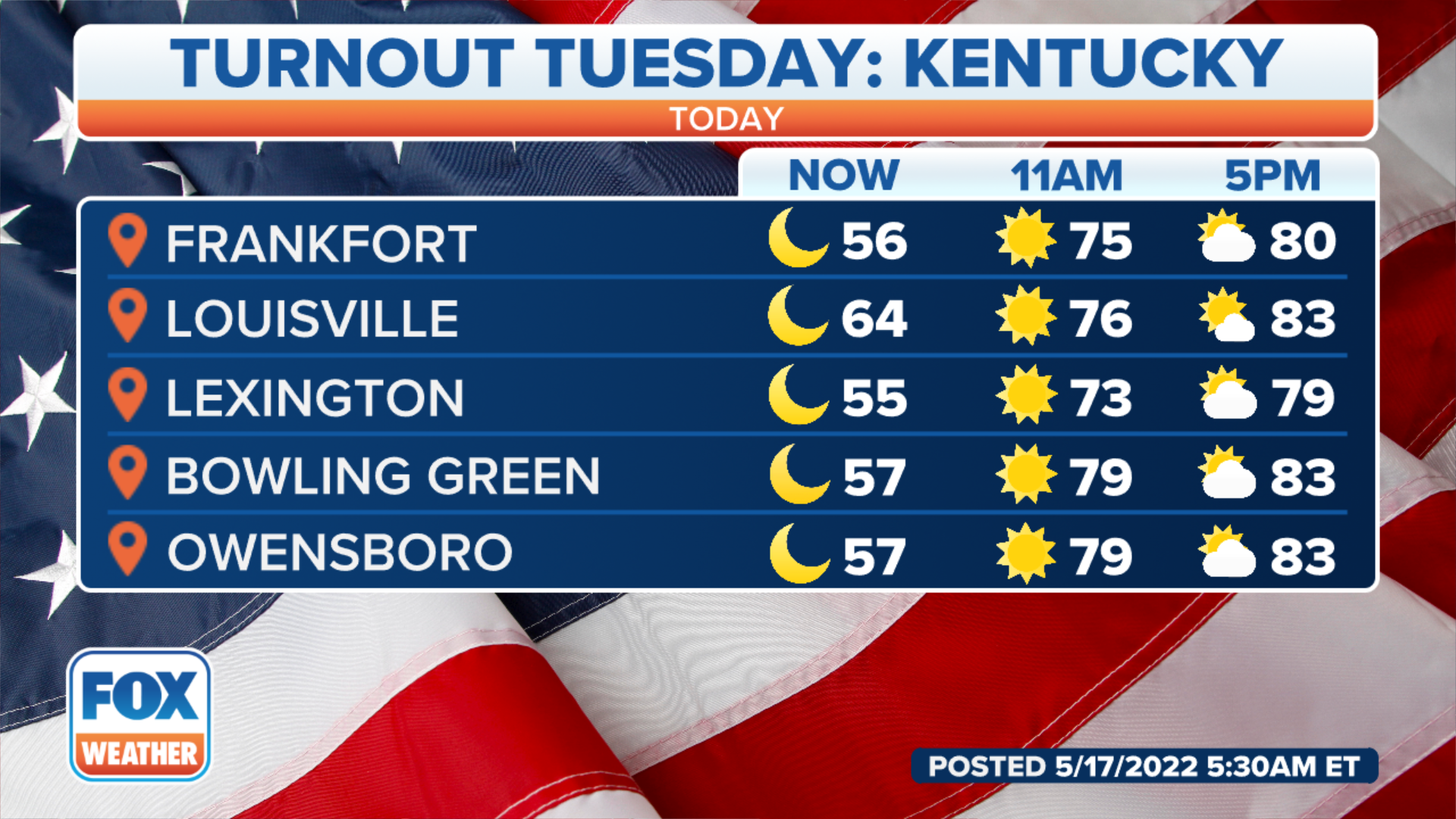 There will be plenty of sunshine across Kentucky most of the day before some clouds roll in later.

Temperatures will range from the mid- to upper 50s in Frankfort, Lexington, Bowling Green and Owensboro to the mid-60s in Louisville.

Sunny skies will be widespread through the morning, with temperatures in the mid-70s to near 80 degrees by 11 a.m.

And as we head into the late afternoon and evening, some clouds will begin to move into the region.

Temperatures will be between 80 and 85 degrees.

If you’re a voter heading to the poll and have questions about the primary, check out the Commonwealth of Kentucky Board of Elections website by clicking here. 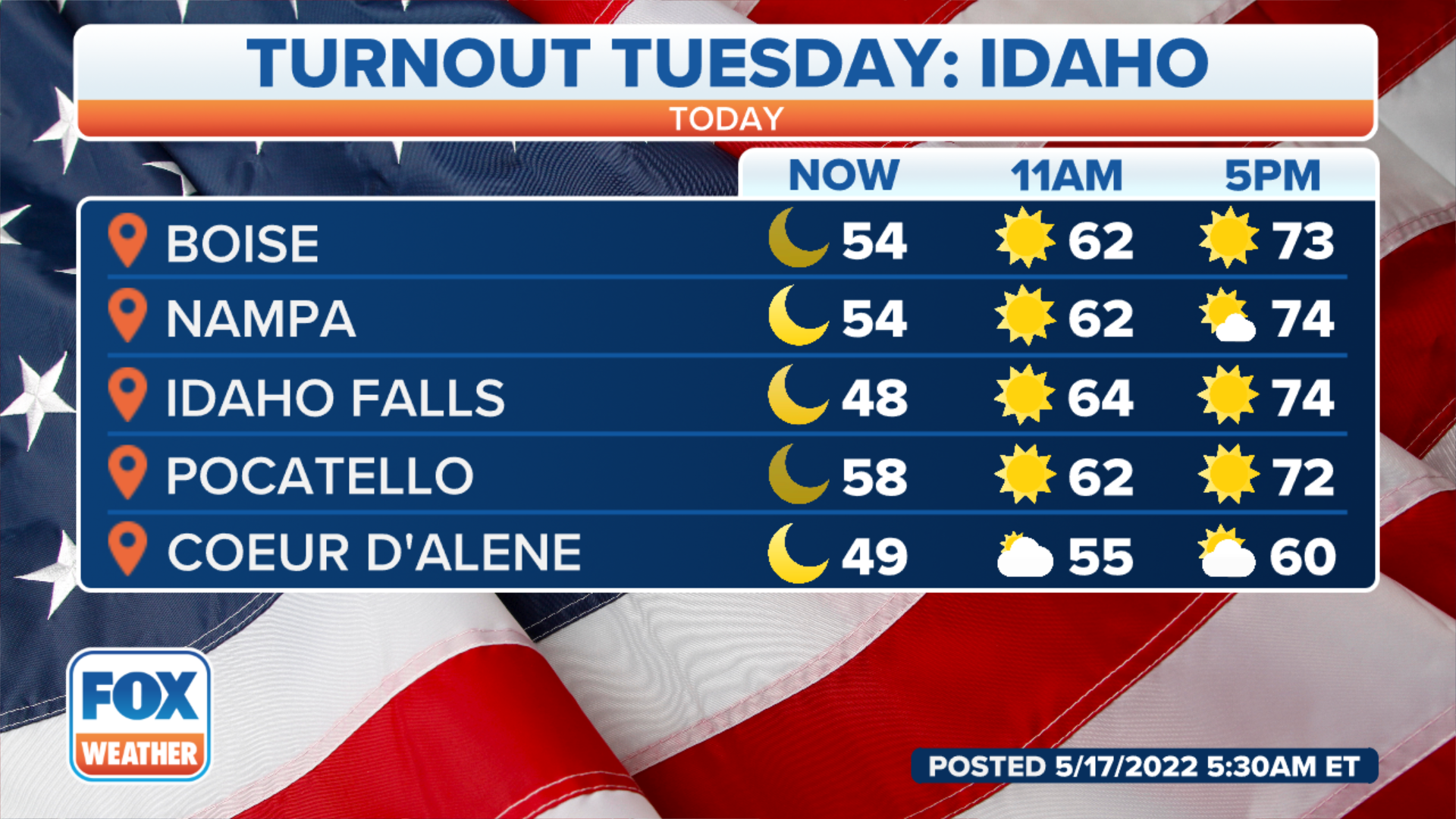 Out west in Idaho, most areas will enjoy sunny skies and mild temperatures.

The state's capital of Boise will start the day off around 54 degrees, then will rise to about 62 in the late-morning hours and should top off around 73 degrees by around 5 p.m.

It will be a little cooler in Idaho Falls, where morning temperatures of around 48 degrees are expected. By late morning, temperatures will get to about 64 degrees and around 74 degrees by late in the day.

Coeur D'Alene will be the colder spot, with morning temperatures around 49 degrees and getting to around 60 degrees by 5 p.m. with some clouds.

If you’re a voter heading to the poll and have questions about the primary, check out the Idaho Secretary of State’s Office website by clicking here. 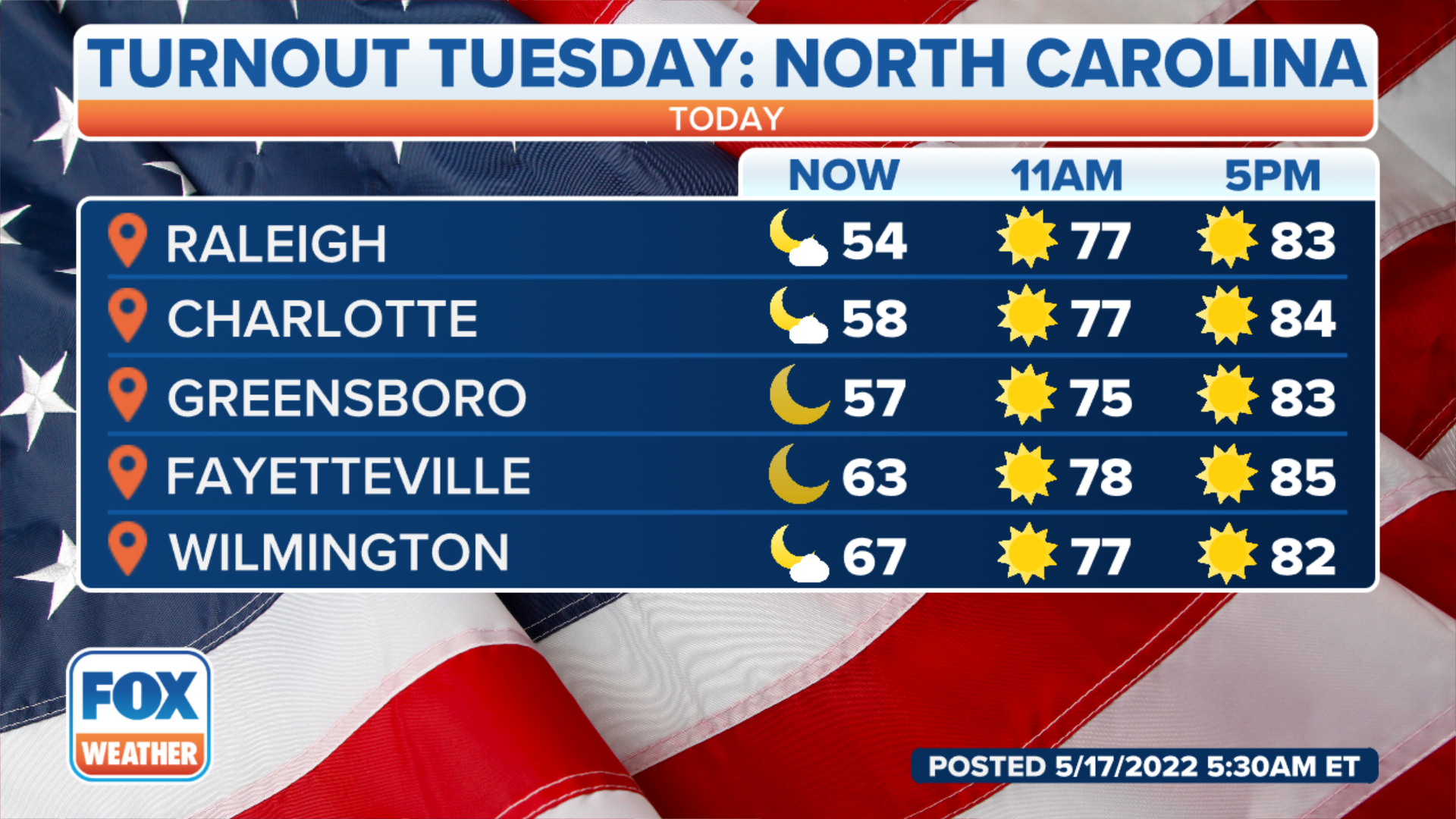 It will be almost a perfect day weather-wise in North Carolina on Tuesday.

Some clouds are expected in the morning in places like Raleigh, Charlotte and Wilmington, but expect sunshine across the state as the day continues.

By 11 a.m., temperatures should be in the upper 70s in Raleigh, Charlotte, Greensboro, Fayetteville and Wilmington, and those same areas will be in the lower to mid-80s by around 5 p.m.

If you’re a voter heading to the poll and have questions about the primary, check out the North Carolina Board of Elections website by clicking here. 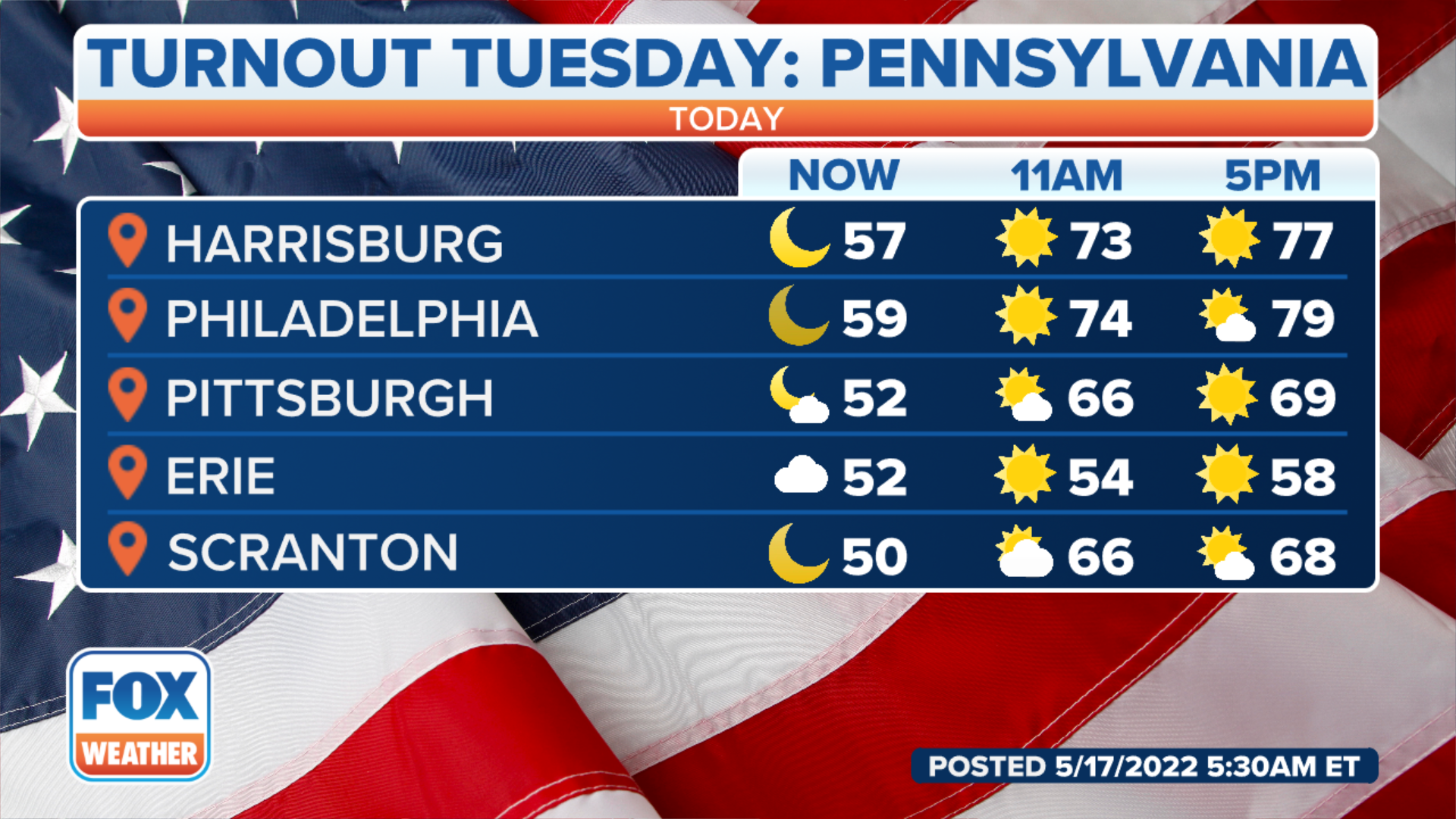 There will be a mix of sun and clouds across Pennsylvania as voters head to the polls on Tuesday, and temperatures should remain comfortable.

Erie will be the coolest city, with temperatures ranging from around 52 degrees in the early-morning hours to 54 degrees by late morning and a few degrees warmer by about 5 p.m.

Harrisburg and Philadelphia should be in the upper 70s by later in the day.

If you’re a voter heading to the poll and have questions about the primary, check out the Commonwealth of Pennsylvania website by clicking here. 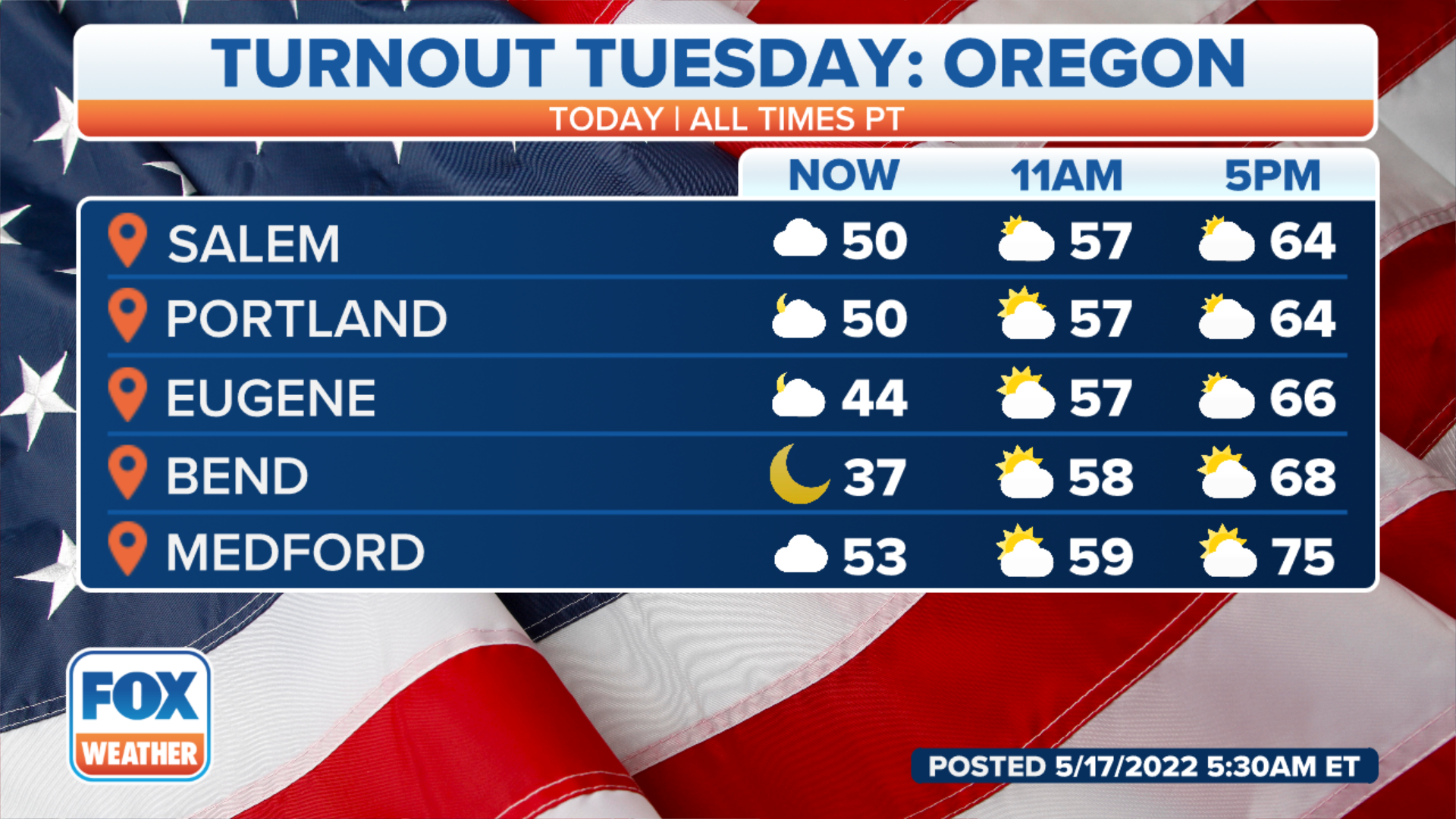 It will remain cooler all day in Oregon, with cloudy conditions across much of the area.

Bend is the cold spot, with a morning temperature of around 37 degrees. But by 11 a.m., temperatures will jump to the upper 50s and near 70 degrees by about 5 p.m.

Medford should have a mix of clouds and sun, with temperatures around 60 degrees by 11 a.m. and 75 degrees by 5 p.m.

If you’re a voter heading to the poll and have questions about the primary, check out the Oregon Secretary of State’s website by clicking here.