Nearly 9 million Americans across the South are under the threat of severe weather this week.

There are strong indications that a potentially significant severe weather outbreak could materialize on multiple days this week across the south-central and southeastern U.S.

NOAA's Storm Prediction Center has been highlighting this threat since Tuesday, when it issued a rare severe weather outlook a week in advance of next week's threat of destructive storms.

No severe thunderstorms are expected anywhere in the United States on Sunday, but that will quickly change by Monday when this multiday siege of severe weather is likely to get underway.

A strong southward dip in the jet stream will punch out of the Rockies and into the Southern Plains on Monday, leading to the development of an area of low pressure at the surface in this region. Warm, humid air will surge northward from the Gulf of Mexico out ahead of the low-pressure system and clash with cooler, drier air over the Rockies. 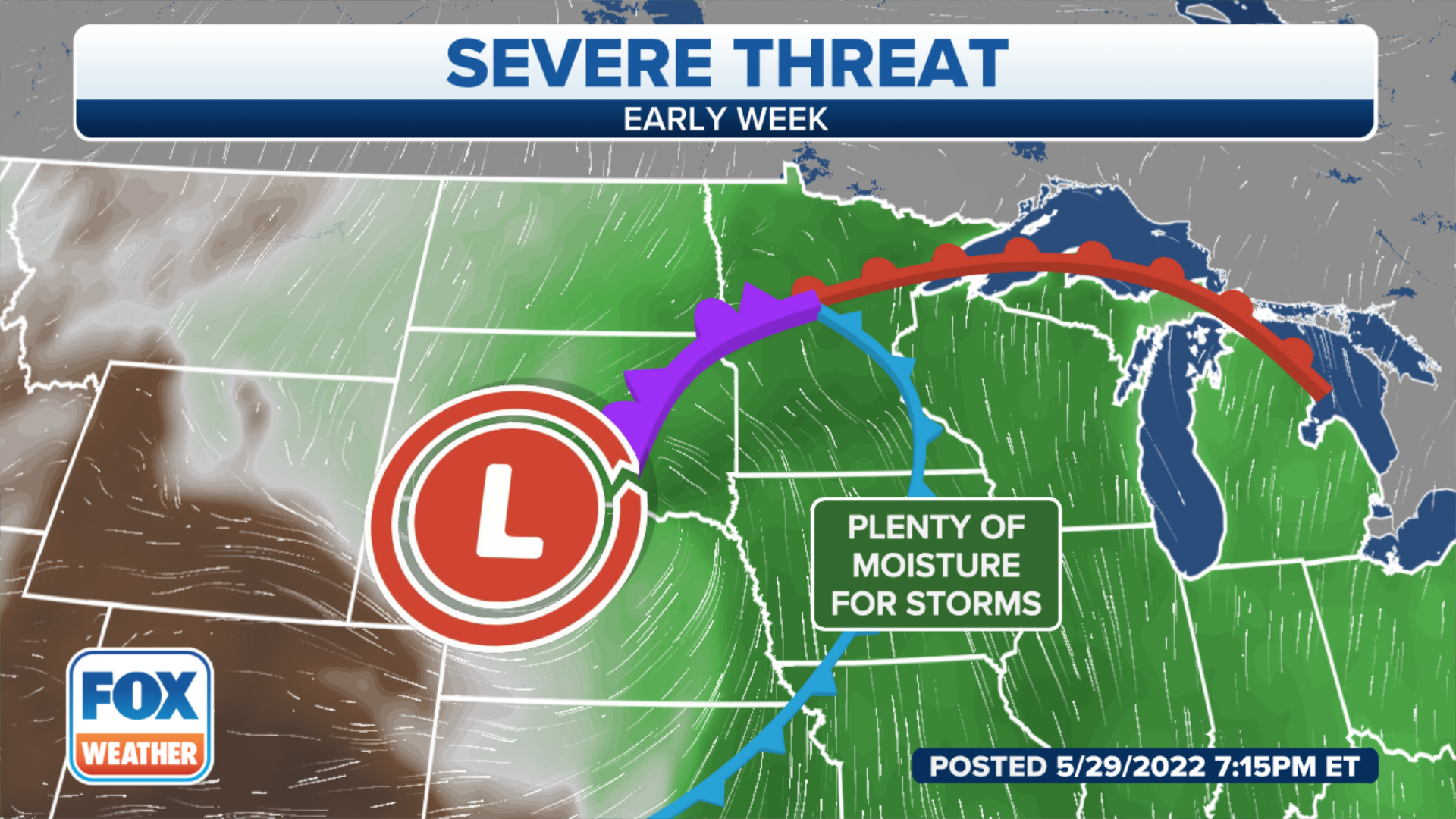 The result of this setup will be large amounts of instability in the atmosphere, causing numerous severe storms to develop beginning Monday afternoon, followed by additional rounds of severe weather Tuesday and Wednesday as the area of low pressure tracks eastward through midweek.

"Medium-range global model output – both deterministic and ensemble – continues to indicate a multiday severe weather event that will progress eastward from the Southern Plains Monday to the Southeast Wednesday," the SPC wrote in its severe weather outlook issued Friday morning.

TORNADO SAFETY: IDENTIFYING THE SAFEST PLACES INSIDE YOUR HOME

Before arriving in the South, this weather system will blanket the higher terrain of the Rockies in fresh snowfall on Sunday, while high winds howl through adjacent portions of the Plains and Southwest.

Here's everything we know right now, but since we are still a few days away from this potential severe weather outbreak, forecast changes can be expected in the days ahead. Be sure to download the FOX Weather app for the latest forecast and weather alerts for your exact location, plus our channel's 24/7 livestream.

Severe thunderstorms are expected to develop Monday afternoon and persist into Monday night from the eastern half of Texas to western and northern Louisiana and southwestern Arkansas. Areas shaded in the darkest red contour on the map below will have the greatest risk of severe weather.

A few tornadoes, large hail and damaging wind gusts are all threats in this region. 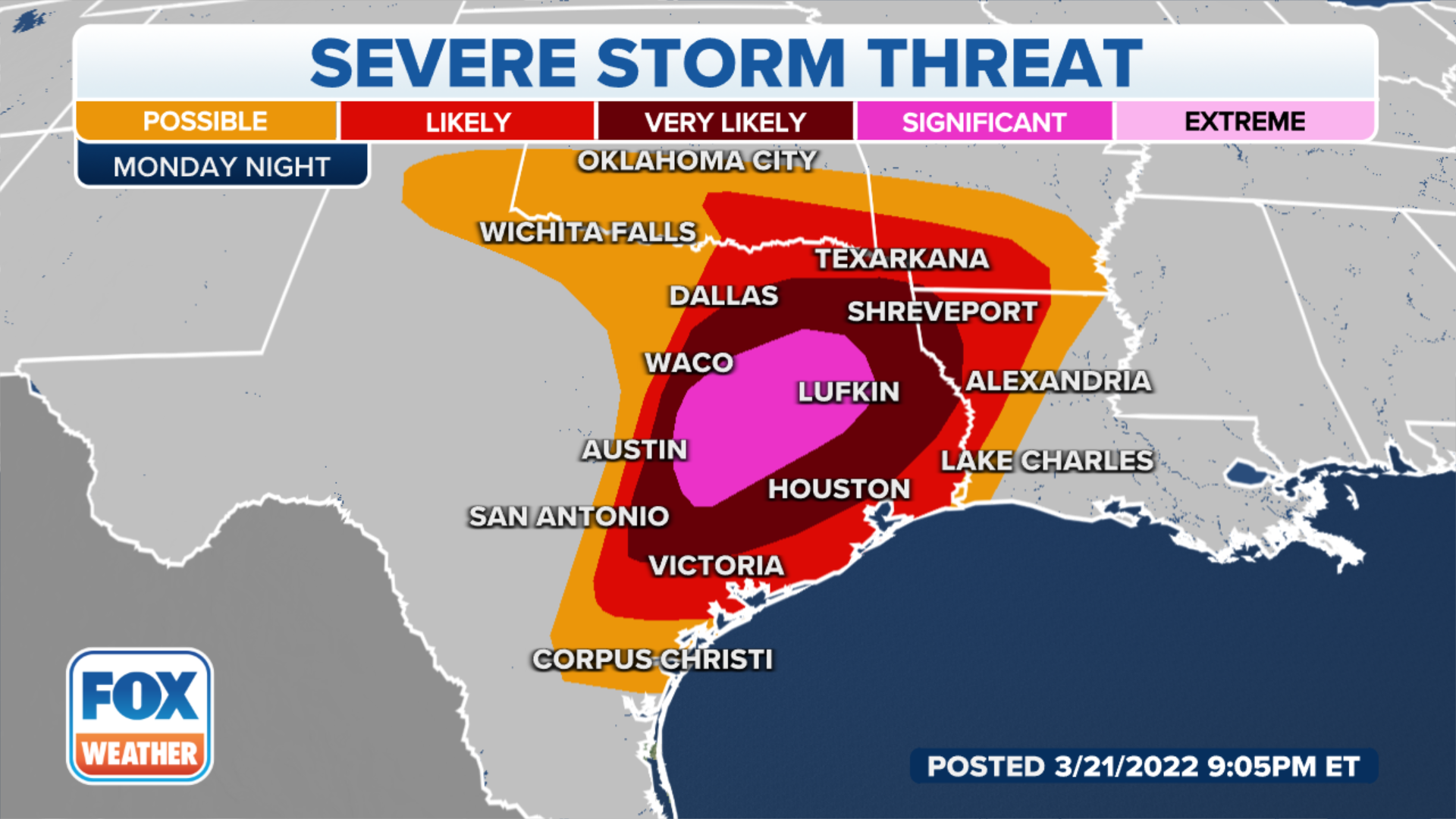 Cities included in Monday's severe weather risk are Houston, Dallas/Fort Worth, Austin and Waco in Texas and Shreveport and Alexandria in Louisiana.

Strong tornadoes are likely on Monday.

Tornadoes are possible across central and eastern Texas, but there is the potential for strong, EF-2 tornadoes in areas including Waco, Killeen, Austin, Huntsville and Houston.

Some parts of Texas could see large hail on Monday.

There's also a significant risk of large hail, including the potential for 2-inch hail in Waco and Austin. 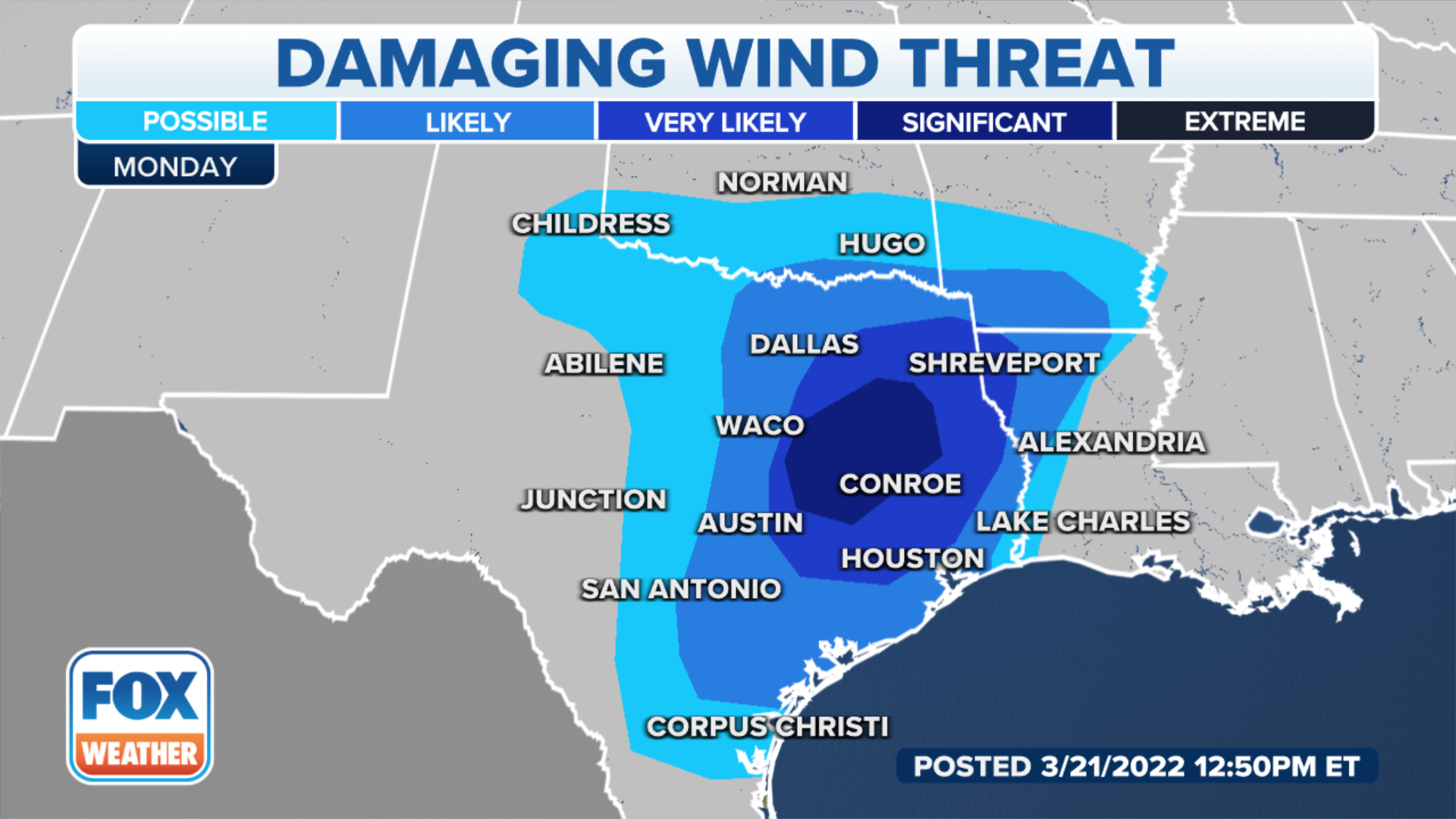 Strong winds are also a concern, with damaging gusts likely from the Dallas/Fort Worth area south to San Antonio and Houston. The threat for strong winds also extends into western Louisiana.

Significant tornado risk along the Gulf Coast on Tuesday

The National Weather Service says there’s the potential for significant tornadoes along the Gulf Coast on Tuesday.

Another round of severe storms is likely Tuesday into Tuesday night, though the threat will be focused farther east than Monday.

The greatest risk of severe weather will be from central and eastern Louisiana to southeastern Arkansas, Mississippi and the western half of Alabama. This includes the cities of Alexandria in Louisiana, Jackson and Hattiesburg in Mississippi and Birmingham, Montgomery and Mobile in Alabama.

A few tornadoes, large hail and damaging winds are all possible with these storms. 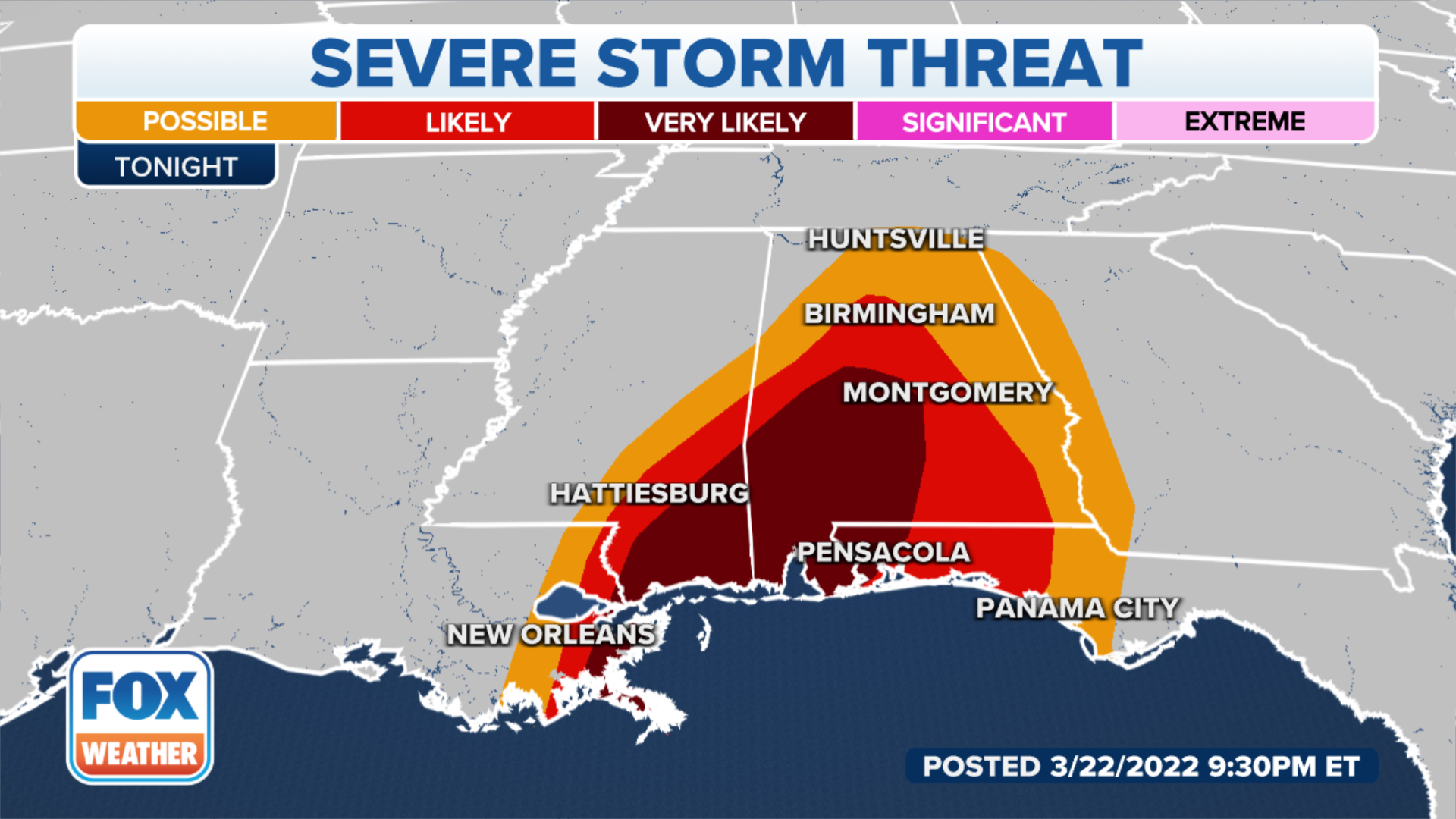 The risk of severe thunderstorms is expected to continue into Wednesday, with the threat again displaced farther east.

Areas from central and southeastern Alabama to Middle and South Georgia and the Florida Panhandle will have the greatest risk of severe storms.

Cities included in the severe weather risk are Montgomery and Dothan in Alabama, Macon and Columbus in Georgia and Tallahassee and Destin in Florida.

Wednesday's threat might not be as significant as earlier in the week, but this region will still have a notable risk of a few tornadoes, large hail and damaging wind gusts.

WATCH VS. WARNING: HERE ARE THE DIFFERENCES BETWEEN THESE WEATHER TERMS THAT COULD SAVE YOUR LIFE 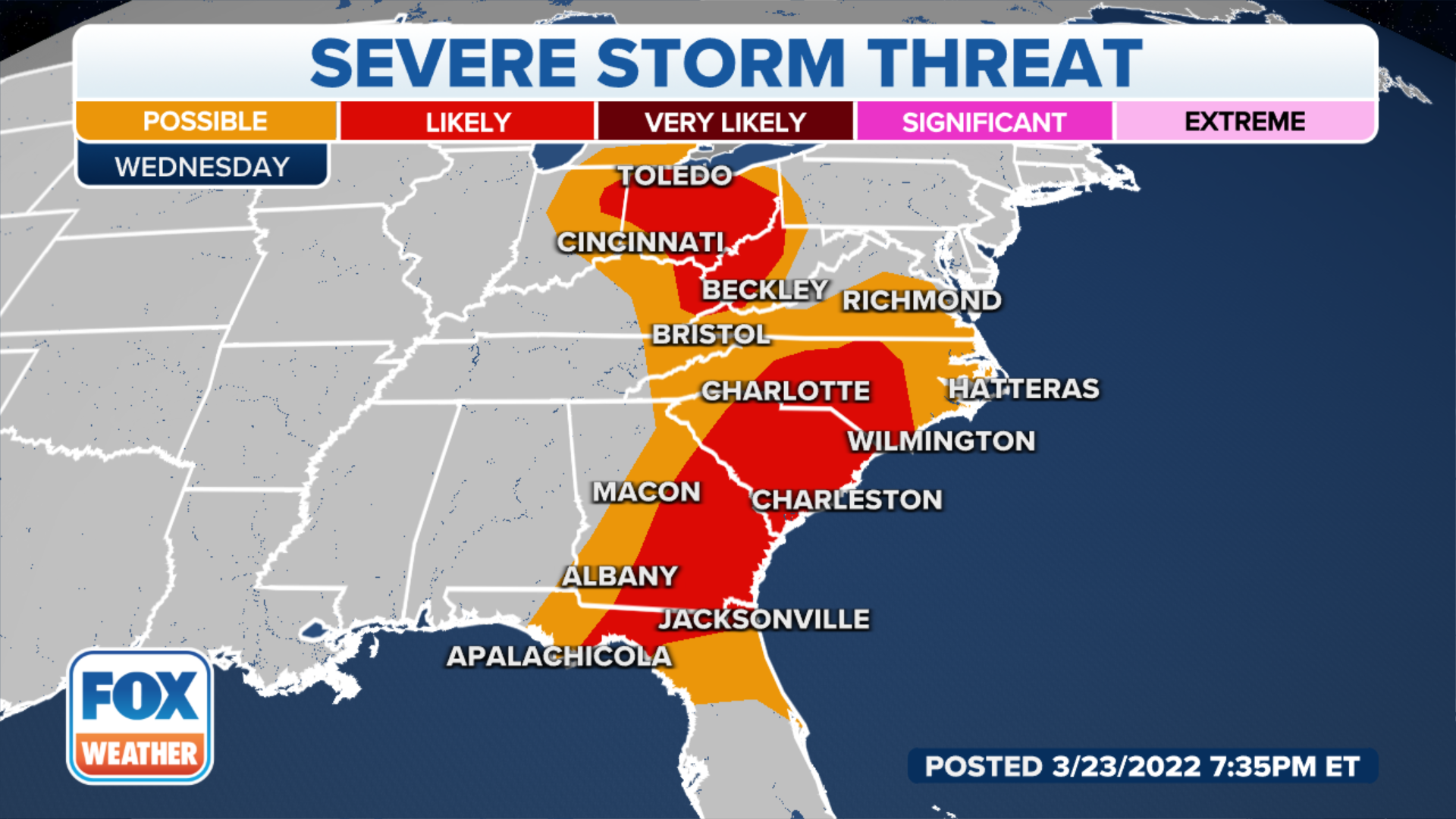 There's a chance some severe storms could threaten Florida and other parts of the Southeast coast on Thursday, but the risk appears limited in these areas before the system responsible for this multiday severe weather siege moves offshore later Thursday.

Now is the time to prepare for next week's severe storms if you live in the South. Click here for a list of tips to guide you through the preparations.