35Posts
Back to Top

Click on the image above to watch live coverage.

The winter storm's final chapter is underway in the Northeast as snow, sleet and freezing rain slicken roads across the region on Friday.

An area of moderate to heavy snow was blanketing an area extending from central and eastern New York into New England early Friday morning, while a wintry mix of sleet and freezing rain was creating a glaze of ice from central Pennsylvania to the New York City tri-state area and coastal southern New England.

As the last of the snow showers move through New England, some areas are seeing reduced visibilities.

Connecticut Governor Ned Lamont announced precautions through Tuesday because of cold air that will follow the snow. The cold weather protocols will work to aid in getting assistance to the more vulnerable residents.

Anyone who sees a resident in need is urged to call 2-1-1 to get connected to cold-weather services.

The NWS Boston has already received reports of more than 5 inches of snow. The metro area could see up to a foot before the winter storm is over.

Temperatures in New England are forecast to drop below freezing Friday night causing roads to be covered in ice.

The sun is shining after a wintry mix in New York City. However, Winter Storm Warnings continue to the north.

Snow to continue through Friday night in parts of Northeast

Snow will continue through Friday night in parts of the Northeast like New England.

Here are the top snow totals in each state

The National Weather Service's Eastern Region has put together a list of the top snow totals in each state as of 1 p.m. Eastern. In general, the heaviest snow so far has fallen from eastern New York into southern Vermont, Massachusetts, southern New Hampshire and southern Maine.

NOAA's Storm Prediction Center says areas of heavy snow will likely persist through late afternoon in portions of northern Vermont, central and northern New Hampshire and much of Maine. Snowfall rates could exceed 1 inch per hour at times.

A FOX Weather Watcher in Durham, New Hampshire, shot this video of slow-motion snow Friday afternoon. About 6 inches has piled up there so far.

Quiet weather returns to much of US behind winter storm

After a busy week of weather with two storm systems crossing the country, a much quieter stretch of weather is expected this weekend into much of next week. High pressure is predicted to build in, leaving a large portion of the U.S. with warmer-than-average temperatures and mainly dry conditions.

Up to 10 inches of snow recorded in New England

New England has seen the heaviest snow from this winter storm on Friday. The top snowfall total so far is 10 inches in Cape Neddick, Maine. Between 8.5 and 9 inches of snow has piled up in Massachusetts to the northwest of Boston.

Freezing rain resulted in significant ice accretion across parts of the Northeast on Friday morning. In central Pennsylvania, Johnstown reported 0.32 inches of ice. Between 0.20 and 0.30 inches of ice was recorded in portions of New Jersey.

The National Weather Service office in Boston says temperatures remain above freezing in much of southeastern New England as of 12:30 p.m. Eastern, but colder air will work in from the northwest and drop temperatures below 32 degrees by mid- to late afternoon. This will result in a flash freeze with roads quickly becoming icy, potentially impacting the evening commute.

Amtrak trains traveling east of New York City are experiencing weather-related delays due to lingering snow and ice in the region.

The sleet and freezing rain have ended in the New York City tri-state area, but slick spots are still possible in the lower Hudson Valley due to temperatures remaining below freezing.

The FOX Weather 3D Radar shows snow and ice are still ongoing across New England as of 12:25 p.m. Eastern. An additional 3 to 6 inches of snow could pile up through the afternoon in northern New York and parts of Vermont.

Troopers with the New Hampshire State Police have responded to more than two-dozen crashes, spin-outs and vehicles off the road throughout the state since early Friday morning. 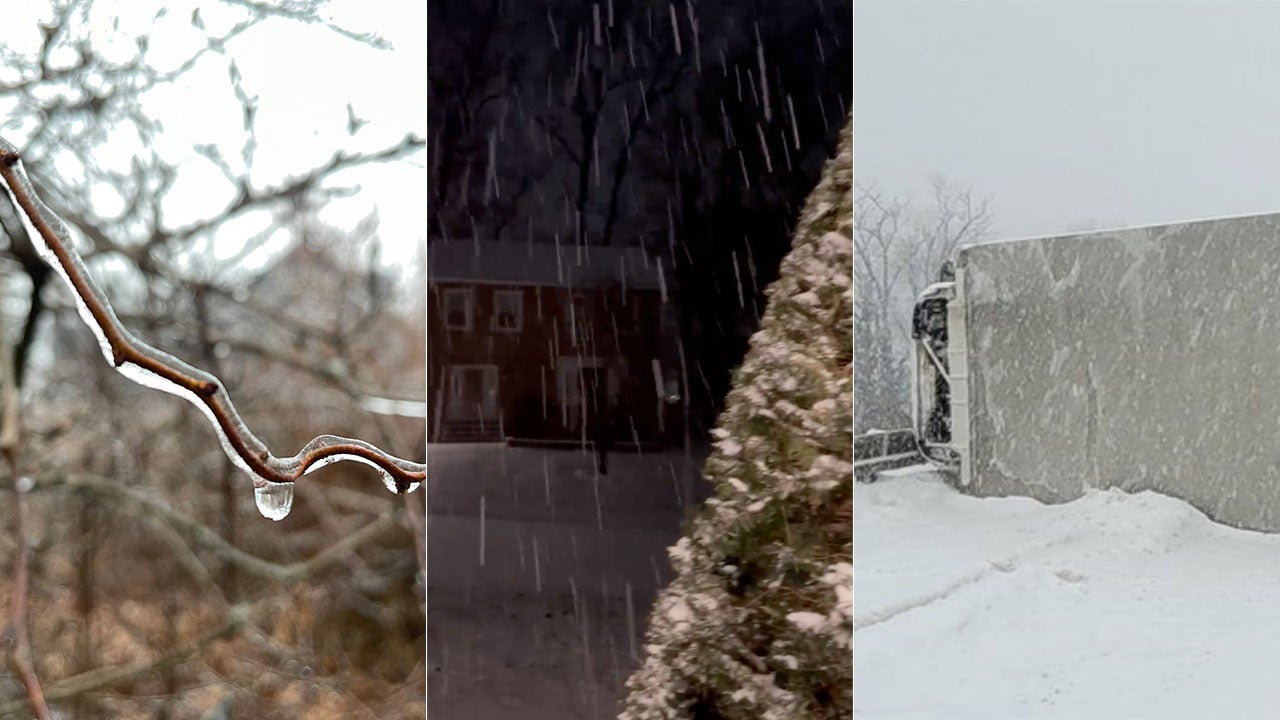 EXTREME WEATHER
Last gasp: Winter storm coating Northeast in ice, snow before exiting US
After traversing the U.S. for most of the week, a winter storm that has wrought havoc along its path is in its final chapter Friday.

After traversing the U.S. for most of the week, a winter storm that has wrought havoc along its path is in its final chapter Friday. The storm is dumping snow, sleet and freezing rain across the Northeast, with some rain also being reported along the coast. Some people who live along the coast woke up to a glaze of ice on trees and cars.

No injuries after semi rollover crash on Massachusetts Turnpike

The right and middle eastbound lanes are closed and expected to be clear by 10 a.m. Eastern.

No injuries and no traffic backup have been reported.

Authorities have responded to a wreck involving a Massachusetts Bay Transportation Authority commuter tail train and an unoccupied sidewalk snowplow.

The Waltham Fire Department was called 8:35 a.m. Friday to the Brandeis/Roberts station on the Fitchburg Line.

Boston 25 News reports 20 people were on board the train at the time, and no one was injured.

“It’s unclear at this time why the plow truck was on the tracks,” said an MBTA spokesman. “The railroad crossing’s protection system was fully operational and performing as it is designed to.  The operator of the plow truck was not inside the vehicle when the train made contact with it.”

Poor visibility in Massachusetts as storm moves in

The Massachusetts Department of Transportation Traffic Safety Team posted this timelapse of the poor visibility on an area interstate.

Winter stats: Nearly half of US covered in snow

A powerful winter storm is slamming the Northeast from New York to Boston. Millions are under the threat of significant icing, making travel conditions a nightmare.

Heavy snow in Boston starts to stick in Copley Square

FOX Weather's Katie Byrne reports consistent, heavy snow starting to stick since about 5 a.m. Friday in Boston. She will be live all day on FOX Weather.

Boston could see 1-2 inches of snow per hour

FOX Weather's Katie Byrne is in Boston, Massasschuttes, where they could see 1-2 inches of snow per hour during the winter storm. Click here to watch the latest report.

FOX Weather Watcher Collin Gross shared these photos from Metuchen, New Jersey, where cars and trees are coated in a layer of ice on Friday morning. 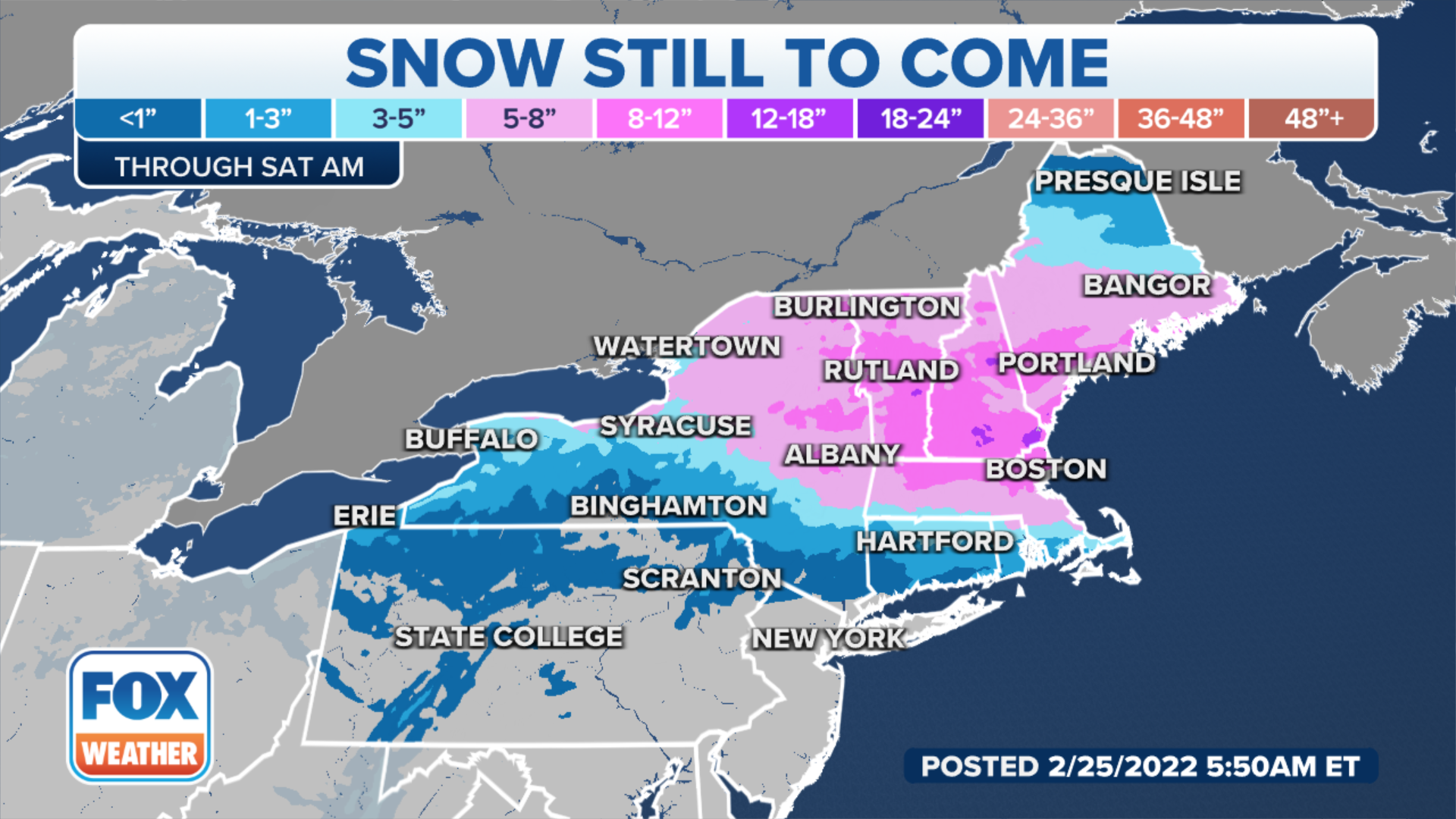 The National Weather Service has issued various winter weather alerts where additional snow and ice are expected across the Northeast on Friday. The worst travel conditions can generally be expected where Winter Storm Warnings and Ice Storm Warnings are posted. However, areas under Winter Weather Advisories might also encounter slick roadways at times.

New Yorkers are waking up to slippery conditions Friday morning as workers try to clear sleet off of roads and sidewalks.

'Snowfighters' work to clear I-91 in Middletown, Connecticut

The Connecticut Department of Transportation continues to clear the snow and sleet from roadways across the state. In the photo above, ' snowfighters' are seen clearing Interstate 91 in Middletown.

"We have over 600 trucks out, and we won't stop until the job is done," the department said in a tweet Friday morning.

Make sure to follow FOX Weather on social media for more videos, photos and coverage of the winter storm. Don't forget to tag us in your weather photos or use #FOXWeather.

FOX Weather's Katie Byrne reports live from Boston as the winter storm hits the Northeast. Boston could get close to a foot of snow. Click here to watch her latest report.