64Posts
Back to Top 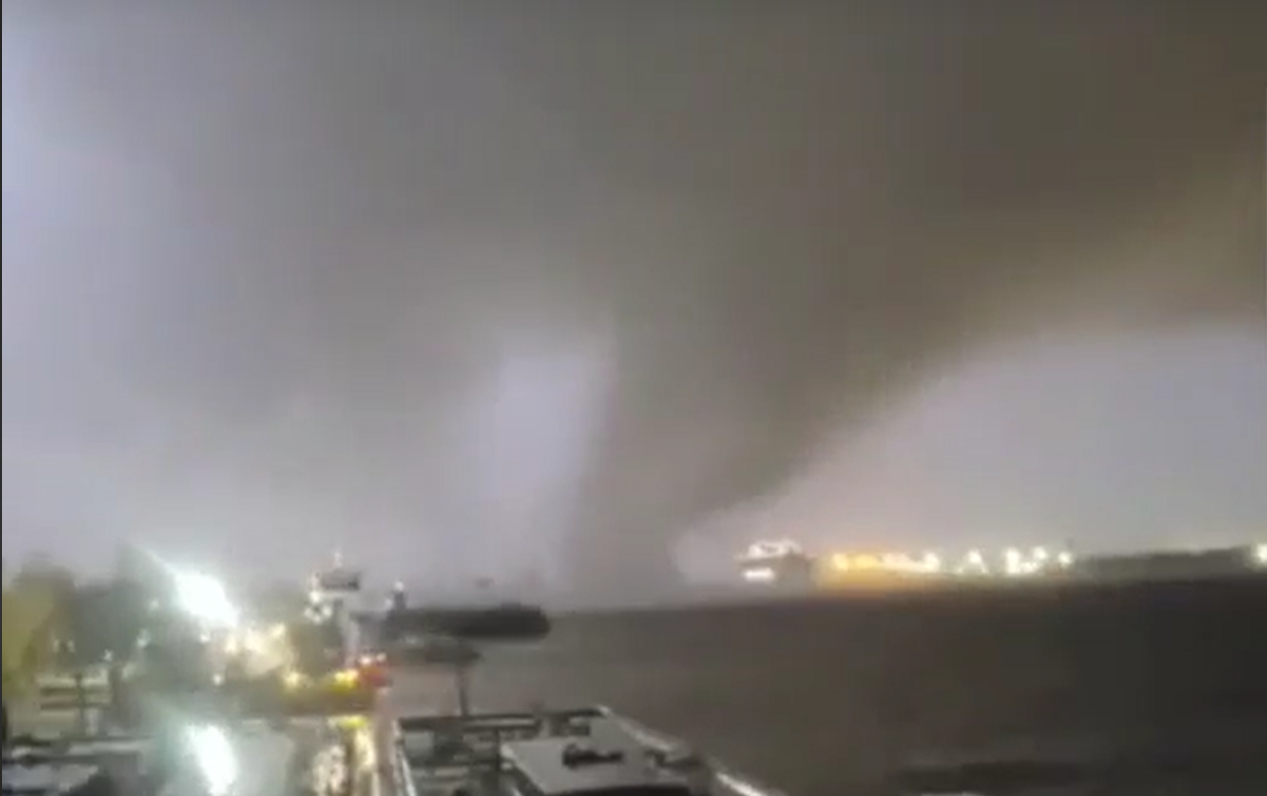 The National Weather Service has issued a tornado warning that includes Pickens, SC, until 10:15 p.m. ET.

Tornado survivor: 'It was really scary' and 'noise was unbelievable'

Jacksboro resident Darlene Wigington shares her story of survival with FOX Weather after a tornado damaged her home.

The National Weather Service plans to continue surveying damage throughout the rest of the week.

A storm survey team is heading to the Mississippi State University campus in Starkville after imagery surfaced showing a possible funnel cloud or tornado may have been responsible for wind damage Monday evening.

It was originally thought to be the result of straight line winds, but an image from the Junction Cam on MSU's campus showed a possible funnel cloud moving over campus at the same time the line of storms moved through.  Photos from the scene showed some downed trees around the campus.

“The results of the survey are expected to be completed and transmitted via a Public Information Statement later (Wednesday)," the National Weather Service office in Jackson, Mississippi said.

Most signs point toward just straight-line wind damage as it was concentrated over two specific areas of campus. But the survey team will make sure that is the case and not that a brief tornado touched down in two areas.

Meteorologists are tracking a tornado-warned storm that is moving through the Palmetto State. The storm with the detected rotation was moving northeast at 40 mph and could impact communities around Abbeville and Lake Secession.

Video from the air shows how significant the damage was from the tornado that impacted the east side of New Orleans.

A Tornado Warning has been issued for areas around Wheeling, WV; Martins Ferry OH; and Saint Clairsville, OH until 5:45 PM.

Meteorologists said the severe storm was moving northeast at 35 mph and capable of producing quarter-size hail.

Heavy rain along I-85 and I-40 in Piedmont Triad

The rotating thunderstorm in central North Carolina is near Interstates 85 & 40 south of Greensboro. The heavy rain is causing poor visibility.

Areas south of Greensboro, NC are now under a Tornado Warning due to rotation detected in a storm. The warning includes the cities of High Point, Thomasville and Archdale until 5:15 PM.

A tornado-warned storm is moving through parts of Camden, Brantley and Charlton counties in Southeast Georgia. The storm is moving to the northeast and is expected to stay just to the west of Brunswick.

A Tornado Warning is in effect in the region until 4:30 p.m.

Drone video shows homes damaged in Arabi, Louisiana, from the 40 Arpent to Judge Perez Drive and from the Mississippi River to St. Claude Avenue.

Metal found wrapped around a pole after tornado in New Orleans

Insulation was seen in trees and metal wrapped around utility poles after a tornado hit New Orleans Tuesday evening.

The Tornado Warning is in effect until 3:45 p.m. Eastern

The Tornado Warning is in effect until 3:45 p.m.

The Tornado Watch is in effect until 9 p.m. Eastern

Recovery efforts are underway after a massive, deadly tornado tore through the heart of New Orleans.

Cars flipped like toys as homes were ripped apart or blown off their foundation, resulting from widespread and extensive damage from what the National Weather Service said was at least an EF-3 tornado.

St. Bernard Parish officials have confirmed the death of a 25-year-old man as storm-related, and several other people were taken to area hospitals. 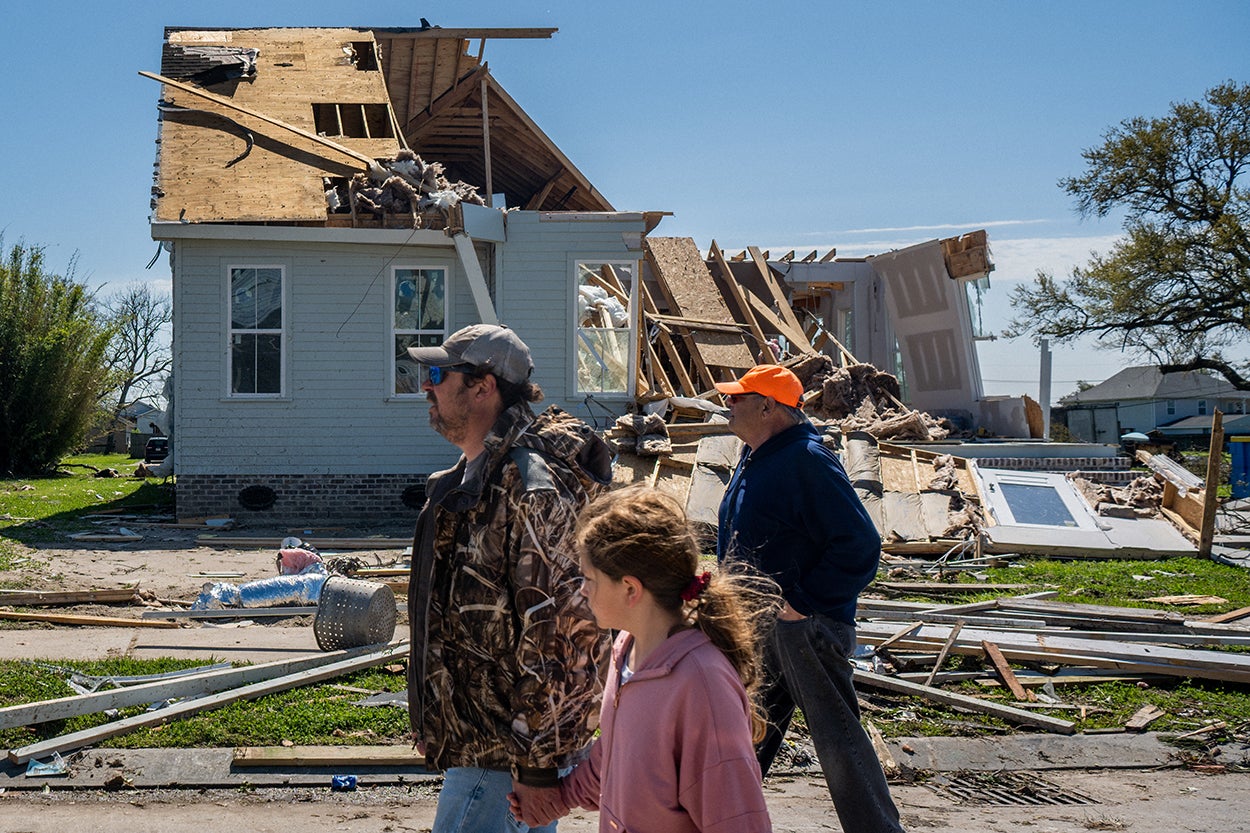 Tornado Watch in effect for parts of Kentucky, Ohio, Pennsylvania and West Virginia.

The Tornado Warning includes Statenville, Withers and Haylow, Georgia, and is in effect until 3:15 p.m. Eastern.

St. Bernard Parish officials say the person killed by the tornado in New Orleans Tuesday night was a 25-year-old man. He is the second victim of the severe weather outbreak that started Monday night. A 73-year-old woman was also killed in Texas.

More than 26 people have been injured in the severe weather system that has impacted eight states from Oklahoma to Florida.

A 100-yard-wide tornado crossed three highways and tore through 12 miles in Lacombe, Louisiana, according to the NWS.

Down but not out: Resilient New Orleans residents vow to rebuild after deadly tornado

"Just like that, it was over with. The house rumbled and shook, and it was gone," Michele Gautreaux said. Click the story below to read more. 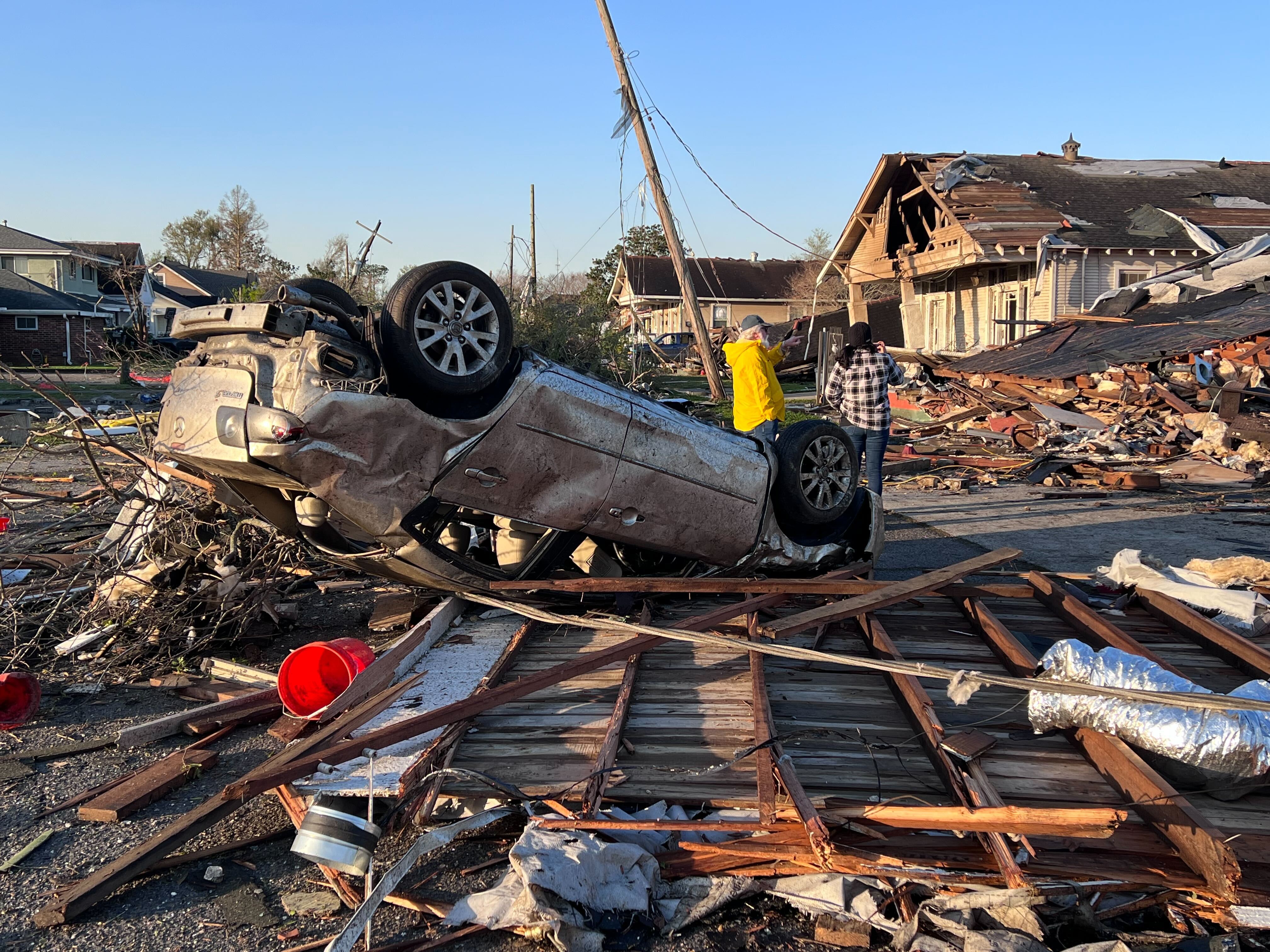 EXTREME WEATHER
Down but not out: Resilient New Orleans residents vow to rebuild after deadly tornado
A massive wedge tornado struck under cover of darkness Tuesday evening as it crossed the Mississippi River in New Orleans, leaving people in its path reacting in horror when they realized this was real.
Posted by Chris Oberholtz Share

How to help: Tornado relief fund for NOLA

The United Way of Southeast Louisiana has a started a Tornado Relief Fund to support relief efforts and long-term rebuilding after the tornadoes in the NOLA area.

An image from aerial video taken by Michael Gordon.

Aerial video shows the carnage left behind after a tornado ripped through the Arabi area on Tuesday night. Watch the full video here provided by Michael Gordon/SCV.

Louis Pomas, with St. Bernard Parish, estimates 50-60% of the Arabi area suffered damages from the tornado.

Just seven months ago, the same area faced Hurricane Ida and many residents recently finished repairs from the Category 4 storm.

Pastor Shelley Planellas showed FOX Weather's Mitti Hicks the damage sustained to the New Covenant Church worship center. The windows were blown out and the song they just sang on Sunday, "God of this City," was visible from the street.

Planellas said she hops God will bring hope and strength to the city in its recovery.

As damage assessment gets underway the morning after severe weather tore through the South, the Mississippi Emergency Management Agency says at least 12 counties sustained destruction from the storms.

The NWS in Mobile says two teams are headed to survey possible tornado damage in Choctaw and Baldwin counties.

FOX Weather Correspondent Robert Ray is on scene where cleanup is just starting in the Arabi neighborhood in New Orleans.

In response to the tornadoes in the New Orleans area, the fire department said there were 164 incidents in 24 hours.

What's next: Evaluating damage in daylight

Daylight is revealing the scope of damage across Arabi, Louisiana, from the deadly tornado that hit the area Monday night.

Use caution during cleanup

FOX Weather's Nicole Valdes is in Arabi, Louisiana, where the damage is starting to be revealed as the sun rises.

New Orleans hit by several tornadoes over last 5 years, but EF-3s are rare

Given the size of the city, the statistical likelihood of a significant tornado impacting the Orleans Parish is moderate, calculated at approximately 30% annually, the city estimates. Based on the past 25 years of NOAA data, the annual probability that New Orleans will experience a tornado is 36%.

WEATHER NEWS
New Orleans hit by several tornadoes over last 5 years, but EF-3s are rare
The city of New Orleans is reeling after a deadly tornado slammed the area Tuesday evening. And while the city has seen its fair share of severe weather events, strong tornadoes are rare.

Before Tuesday, the most recent tornado to rip through Orleans Parish was an EF-0 on May 12, 2021. Since 1950, they have seen 21 tornadoes, with eight of those ranked EF-2 or higher on the Enhanced Fujita Scale.

The strongest on record was an EF-3 tornado back in February 2017 with peak winds of 150 mph, according to the National Weather Service. The storm destroyed 638 homes.

WATCH: Videos show power of tornado outbreak across the South 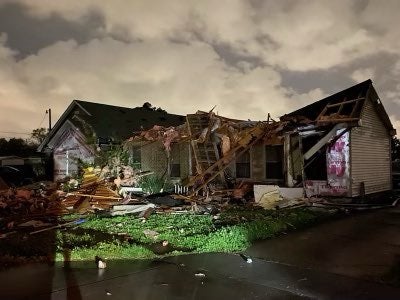 EXTREME WEATHER
These 7 videos tell the stories of this week's tornadoes across the South
Two are dead and many more injured this week after tornadoes tore across Texas, Oklahoma, Louisiana, Mississippi and Alabama. Governors declared States of Emergency as countless homes were destroyed.

Two are dead and many more injured this week after tornadoes tore across Texas, Oklahoma, Louisiana, Mississippi and Alabama.

FOX Weather compiled seven videos to describe the power that ripped down walls, the force that tossed cars like toys, the fear of those fleeing harm and the shock of those cleaning up the aftermath.

As storm damage surveys get underway, the NWS New Orleans office says at least two twisters have been confirmed. One in New Orleans East and another in Lacombe. Both were confirmed by doppler radar and videos from the ground. 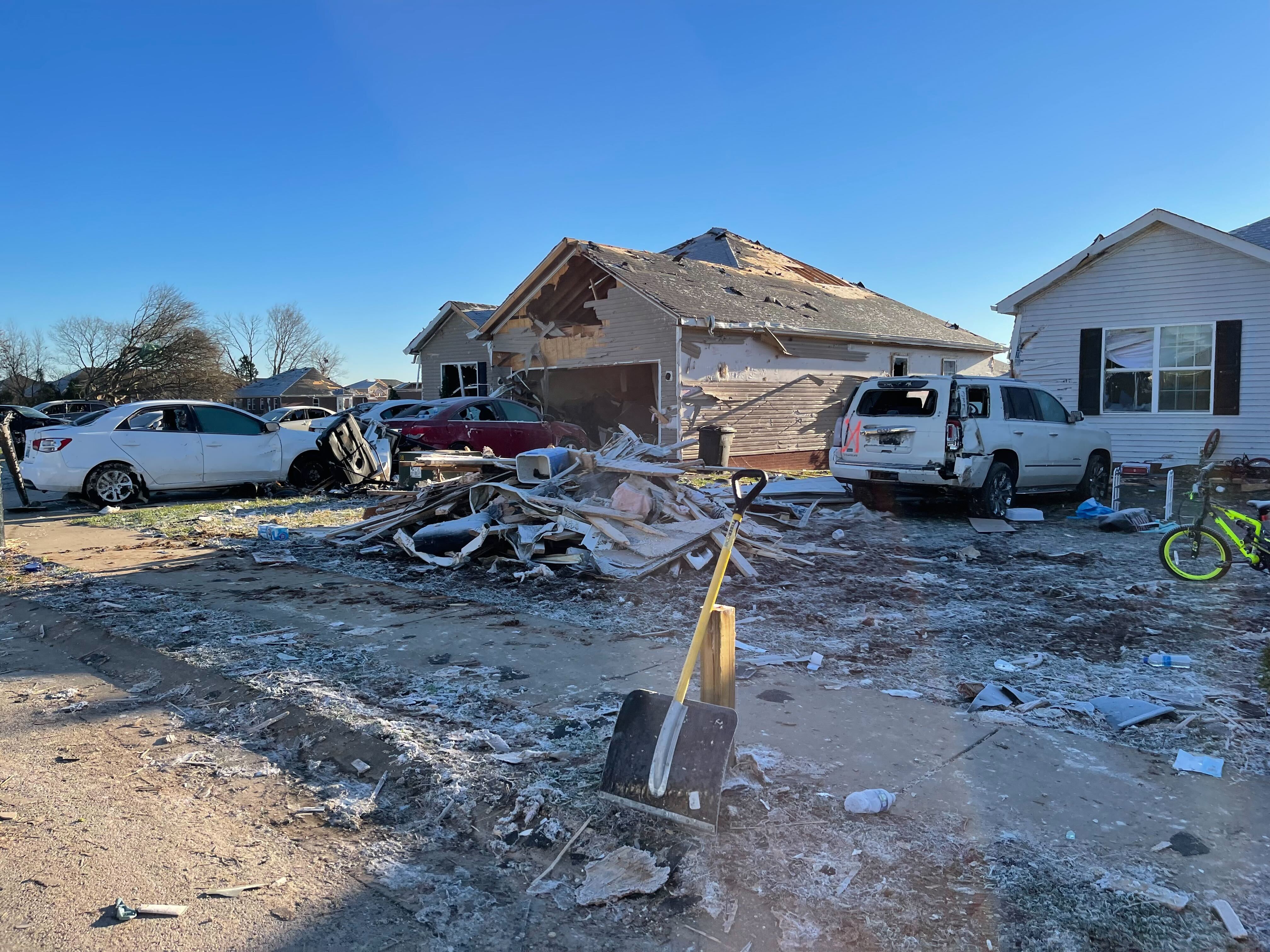 LEARN
What you should do if your property sustained tornado damage
Tornadoes can cause damage wherever they touch down. Sometimes it’s a felled tree or roof damage. Other times entire towns are leveled.
Posted by Steven Yablonski Share 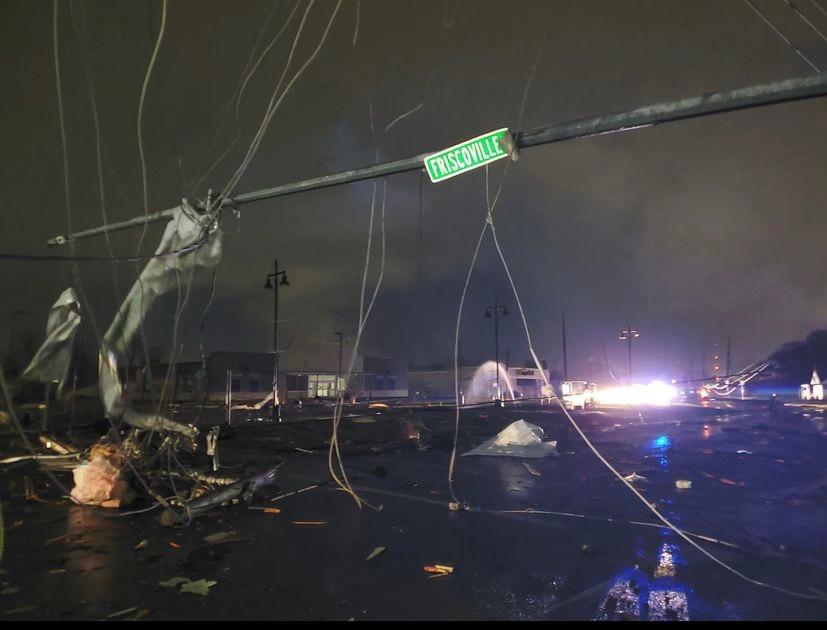 WEATHER NEWS
Survey teams to investigate tornado damage in New Orleans
Teams with the National Weather Service will head out to inspect storm damage Wednesday after a tornado tore through parts of the city Tuesday night.
Posted by Steven Yablonski Share

For the latest on the severe weather outbreak, click here.

Tornado that hit New Orleans was multi-vortex. Here's what that means 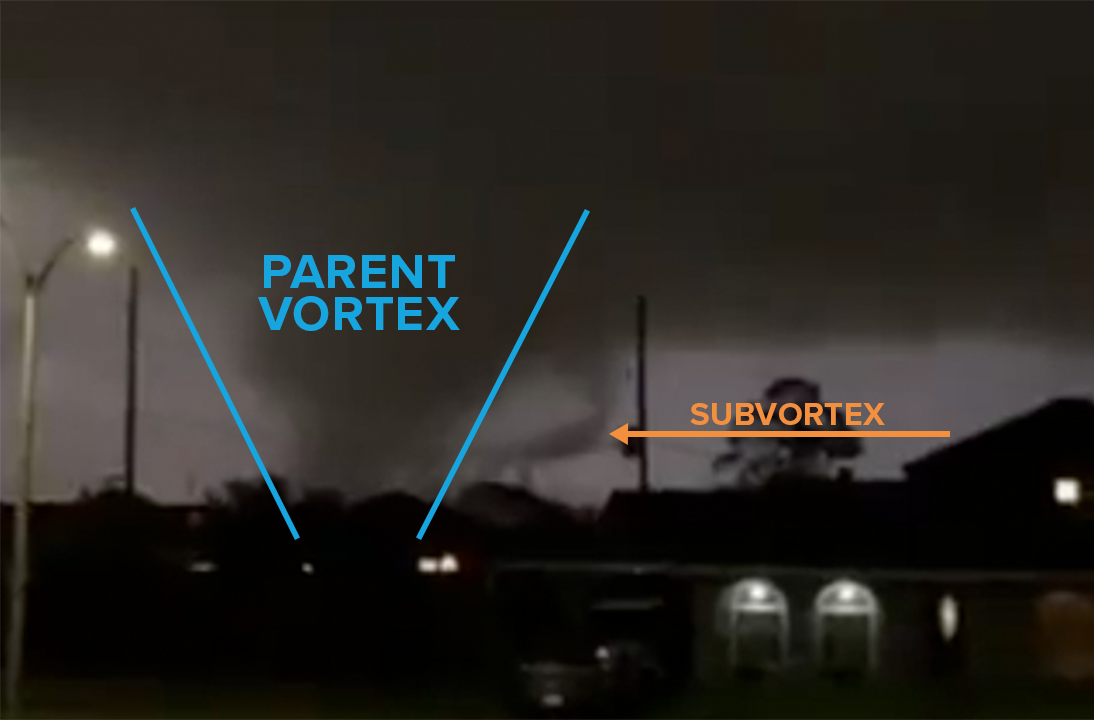 LEARN
What is a multi-vortex tornado?
null
Posted by Steven Yablonski Share

A Tornado Watch is in effect until 6 a.m.

A Tornado Watch is in effect until 6 a.m. Central for parts of Alabama and Florida.

For the latest on the severe weather outbreak, click here.

At least one person was killed when a tornado touched down in St. Bernard Parish near Arabi, Louisiana, on Tuesday evening.

The National Weather Service issued a Tornado Warning for the New Orleans area and confirmed that one had touched down near Gretna.

According to the Saint Bernard Parish Sheriff’s Office, as of Tuesday night, locals were cut off from power and there was “severe damage” to homes. Search and rescue efforts were also underway “for residents trapped in their homes."

Video taken by Nicole Ybarzabal Amos in Chalmette shows the tornado moving quickly through the area.

The NWS says a severe thunderstorm capable of producing a tornado was located near Santa Rosa Beach moving northeast at 25 mph.

A massive tornado tore through pats of New Orleans on Tuesday night.

For more information on the severe weather outbreak, click here.

Tornado Watch in effect for parts of Alabama, Florida

A Tornado Watch is in effect until 6 a.m. Central

The Tornado Watch remains in effect until 6 a.m. Central.

For more information about the severe weather outbreak, click here.

At least 1 dead when tornado tears through New Orleans 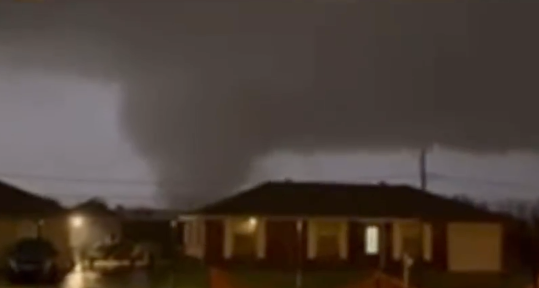 Witnesses and video from the scene showed a large, multi-vortex tornado went into the Arabi and Lower Ninth Ward area on Tuesday night.

Threat for severe storms on Wednesday

The threat for strong or severe storms will exist from the Great Lakes through Florida on Wednesday.

‘The size and enormity of the tornado… I just knew it wasn’t good,' New Orleans resident 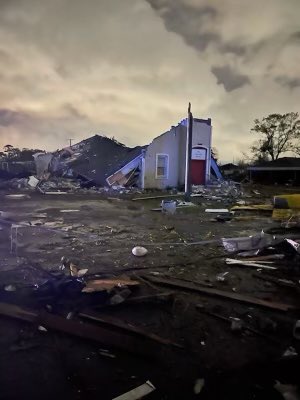 EXTREME WEATHER
‘The size and enormity of the tornado… I just knew it wasn’t good,' New Orleans resident
ST. BERNARD PARISH, La. – Just a mile away, Ashton Gibbs stood at the front door of his home watching a tornado. He said after 18 years in law enforcement and countless hurricanes he has never seen a tornado in his hometown. Yet, he knew exactly what he was seeing.
Posted by Steven Yablonski Share