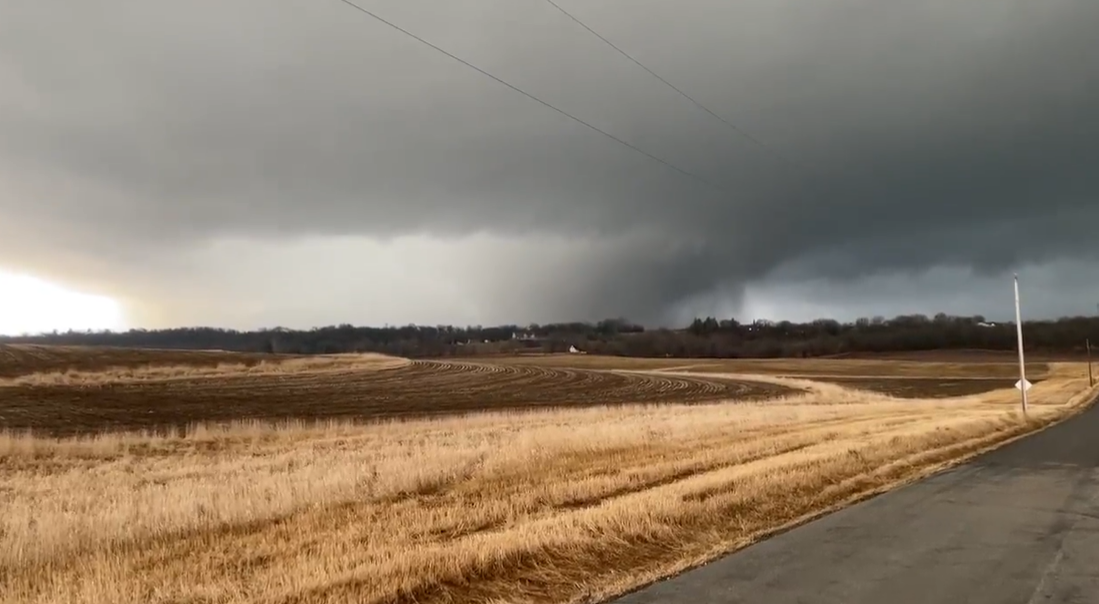 Several Tornado Warnings are in effect for areas around Davenport, IA as severe storms continue their trek eastward across the Midwest.

The affected areas are under a Tornado Watch until 11 p.m. CDT and meteorologists warn that damaging winds, hail and tornadoes are all possible.

Authorities are also asking the public to avoid the impacted areas to allow emergency responders to perform search and rescue operations.

FOX Weather 3D Radar is tracking a pair of supercells in eastern Iowa. Both storms have a history of producing significant rotation and likely tornadoes in The Hawkeye State.

Tornado Warnings are in effect for Wapello, Mahaska, Keokuk, Jefferson and Benton counties.

Tornado Watches now cover three states and are in effect for more than 3 million people in Iowa, Missouri and Illinois. Meteorologists warn the threat of rotating supercells will continue into the evening because of the moist, unstable air.

The latest Tornado Watch is in effect until 11 p.m. CDT for the possibility of tornadoes, damaging winds to 70 mph and large hail.

An Iowa resident captured video of the supercell that moved through parts central parts of the state on Saturday afternoon.

During the Tornado Warning for the Des Moines metro area, passengers at the Des Moines International Airport were sent to the basement for safety. A traveler said the airport stopped all air traffic during the severe weather event.

The storm that produced the warning has moved off to the east, well away from Des Moines.

Radar image of a supercell moving through central Iowa

A supercell thunderstorm that produced a tornado on the south side of Des Moines continues moving northeastward. A Tornado Warning has been issued for areas around Newton, Colfax and Prairie City in central Iowa.

Pair of supercells moving near the Missouri-Iowa state line

Meteorologists are tracking a pair of supercells near the Missouri-Iowa state line. Decatur and Wayne counties in Iowa and Mercer County in Missouri are under a Tornado Warning.

Meteorologists say the storms are moving to the northeast around 45 mph.

Radar of supercell moving through the Des Moines metro area

Meteorologists believe a large tornado was moving through the Norwalk area, with areas around the Des Moines International Airport and Carlise likely under the threat within the next 15 minutes.

Iowa DOT camera along I-35

National Weather Service meteorologists said a confirmed tornado was in the area Winterset, Iowa and was expected to cross I-35 near Martensdale. Residents in the southern part of Des Moines were urged to seek shelter.

Parts of Des Moines metro under a Tornado Warning

Damage to a farm in Cromwell, Iowa was reported after a tornado-warned storm moved through the region on Saturday afternoon. PowerOutage.US showed around 2,800 outages in The Hawkeye State as of 4:30 p.m. CDT.

Meteorologists are tracking a storm that has already produced at least one tornado near Green Valley Lake, Iowa.

Madison, Union and Adair counties are under a Tornado Warning until 5:00 p.m. CST as the storm moves to the northeast at 40 mph.

What you should do if you are under a Tornado Warning

If your county is placed under a Tornado Warning and you don't have a storm shelter to get to, experts suggest:

-Finding an interior room on the lowest level of a home

-Cover your head with materials to protect against flying debris

Radar indicating a tornado is moving through southwest Iowa.

The National Weather Service says they have received numerous reports of a tornado touchdown near Corning, Iowa. So far, there have been no immediate reports of damage in the southwestern part of the state. PowerOutage.US reports around 2,800 customers as of 4 p.m. CDT were without power as several severe thunderstorms move through the state.

Hacks to keep your smartphone charged during an outage: Click Here

Meteorologists are tracking a debris ball on radar, which likely indicates a tornado has produced damage near Corning, IA. Storms are moving to the northeast at a rate of around 30 to 40 mph. The entire area remains under a Tornado Watch until 8 p.m. CDT.

The FOX Weather 3D Radar is tracking several supercells in the southwestern part of Iowa. Adams and Taylor counties are under a Tornado Warning until 4 p.m. CST. Meteorologists said a storm capable of producing a tornado was near Villisca, Iowa moving northeast at 45 mph.

Track the storms on the FOX Weather app: Click Here

Tornado Watch issued for parts of Iowa, Missouri and Nebraska

A Tornado Watch was issued for parts of Iowa, Missouri and Nebraska until 8 p.m. CDT. Meteorologists warned developing supercells could produce tornadoes in and close to the alerted area.