33Posts
Back to Top

Operations at ports return to normal after tropical disturbance passes 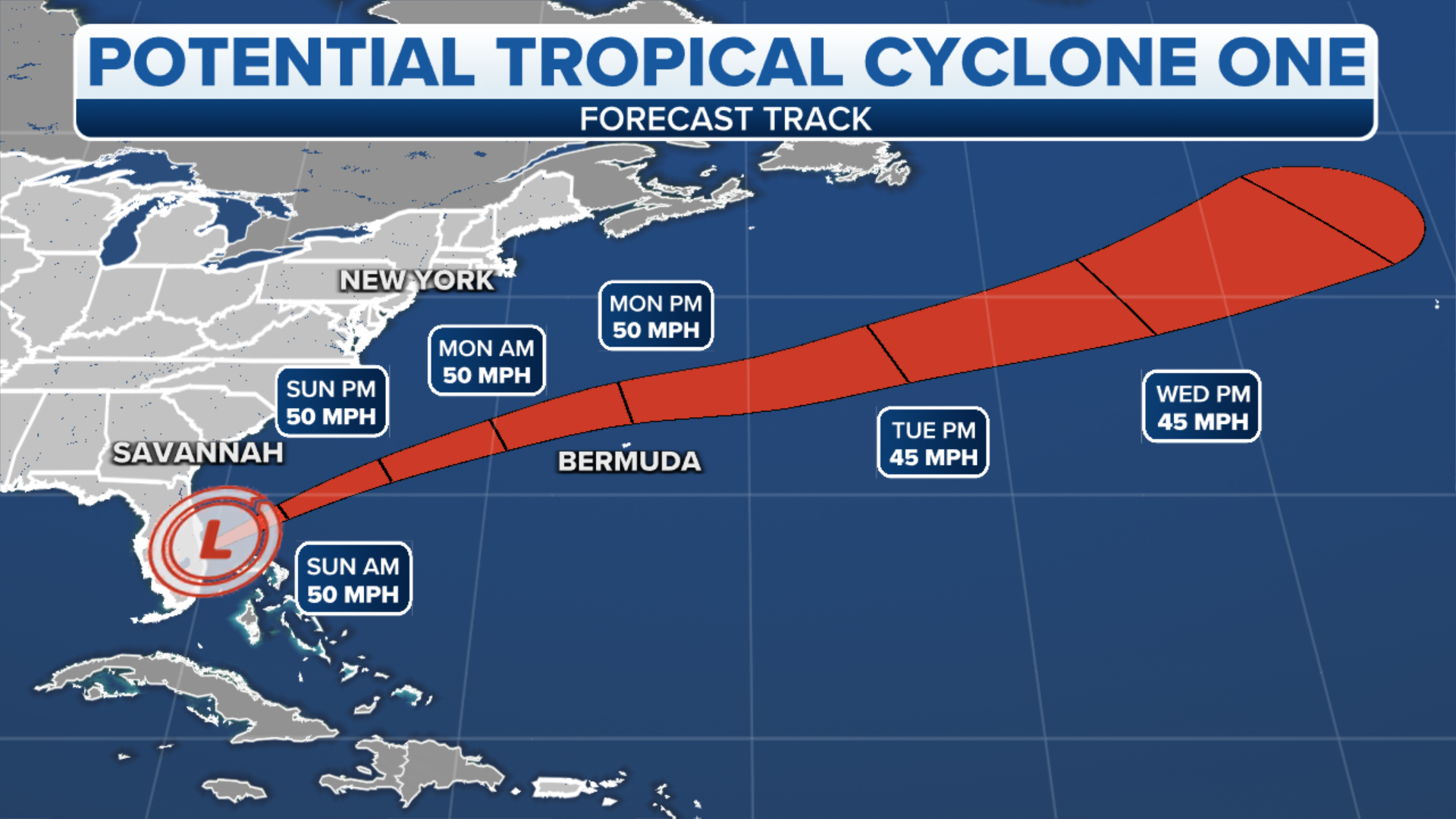 There next nation up to see possible impacts from the tropical disturbance is Bermuda.

The National Hurricane Center says that the center of the disturbance for Potential Tropical Cyclone One is emerging into the Atlantic, east of Florida. Flooding rains and strong winds over portions of the northwestern Bahamas is still likely through the evening.

At this hour, the storm has maximum sustained winds at 45 mph and is moving northeast at 18 mph.

The NHC believes that there is still a high chance of reaching tropical storm status.

Pumps are getting a workout in Miami Dade after nearly a foot of rain fell across South Florida since Friday.

The MLB game at loanDepot park is continuing as scheduled. Some of the nearby streets might be flooded but officials say there are still plenty of routes to the ballpark.

Evidence of the torrential downpours is still visible near Fort Lauderdale. Some streets still have standing water on them even though the sun is peeking through the clouds.

People can report flooding in their neighborhoods by calling 3-1-1.

The latest track for Potential Tropical Cyclone One.

As of the latest update from the National Hurricane Center the Tropical Storm Warning has expired for the east coast of Florida, south of Jupiter inlet.

The warning remains north of Jupiter to the Brevard-Volusia county line.

The center of the tropical disturbance is approaching the east coast moving northeast at 18 mph.

More than 11 inches of rain in Miami so far

Rain totals from Potential Tropical Cyclone One in Southeast and Southwest Florida.

Since Friday, Miami has received nearly a foot of rain. On the opposite coast, more than 8 inches have fallen in Naples, Florida.

Is that the sun? West Palm Beach sky begins to clear

The FOX Weather Beast is in West Palm Beach where the sky is beginning to clear.

Florida Power & Light crews are working to restore power on Saturday, but flooding in areas of South Florida is causing delays.

"Thank you for your patience, we will not stop until every customer is restored. Please stay safe and stay far away from downed power lines and flooded electrical equipment," the utility company said in a statement on Facebook.

More than 7,800 people are currently without power as of 12:45 p.m. EDT, according to PowerOutage.US.

Local flooding remains the primary threat as a tropical disturbance has dropped nearly 10 inches of rain in areas of South Florida.

The tropical system is reforming a little as it picks up speed moving across South Florida but it's not expected to be a threat for much longer.

There remains a potential for 40 mph winds and continued heavy rain fall.

How to best cover your property against floods

With a hyperactive Atlantic hurricane season now underway, up to 20 named storms this year could have an impact on many coastline communities.

Inland flooding from tropical rain is also a risk, and making sure your property is adequately insured can create real peace of mind and make recovery easier.

There’s a 30-day grace period when you purchase a flood insurance policy."So if you're thinking about it right now, and you're getting rain in your area, it might be too late," said Sean Kevelighan, CEO of Insurance Information Institute. "However, it's always good to call. Flood insurance is imperative." 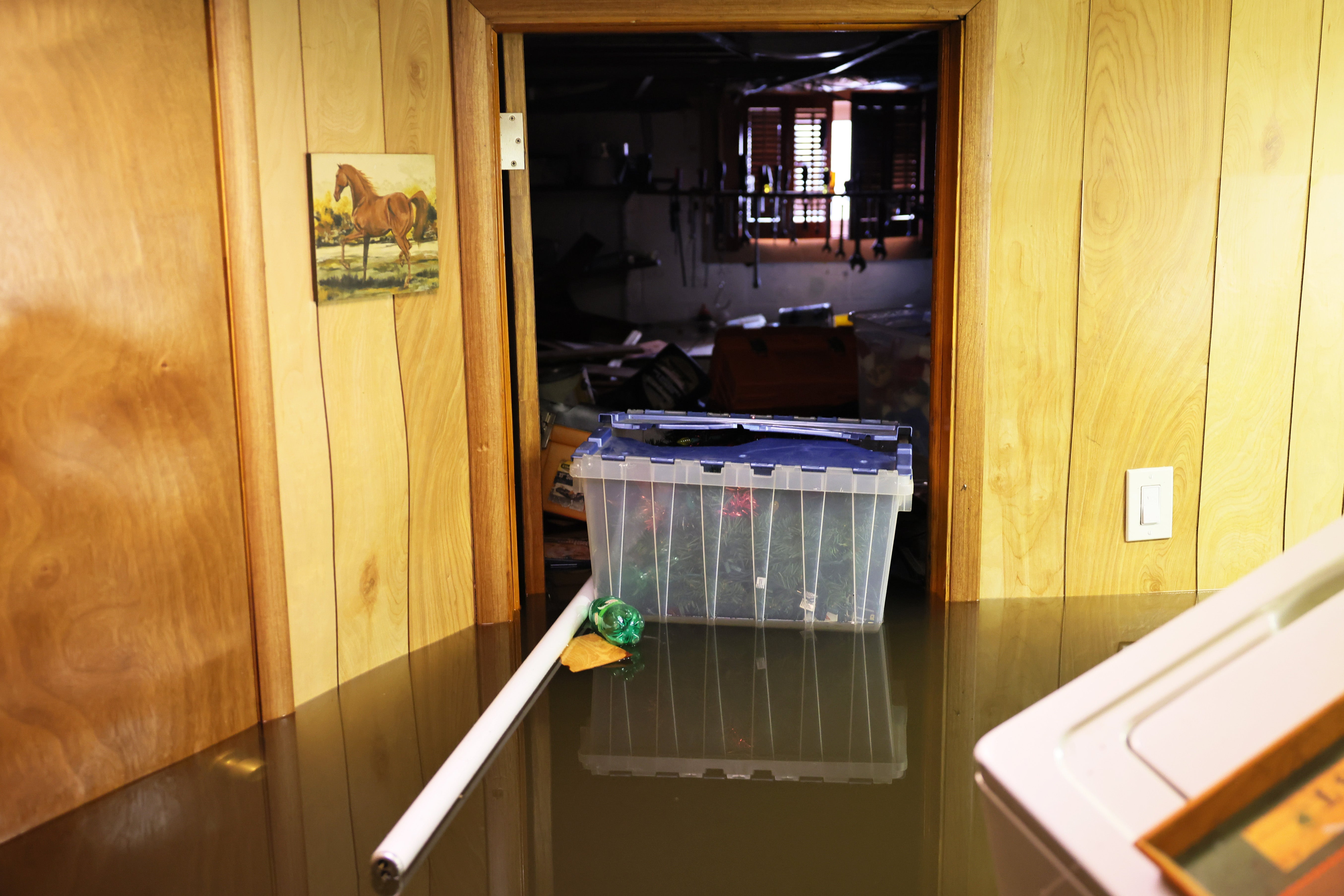 LIFESTYLE
Plan, prepare, protect: How to best cover your property against floods
With a hyperactive Atlantic hurricane season now underway, up to 20 named storms this year could have an impact on many coastline communities.
Posted by Chris Oberholtz Share

FOX Weather's Brandy Campbell is in Miami where abandoned flooded cars are being removed from the streets.

All Tropical Storm Warnings on the west coast of Florida have been canceled.

The only Tropical Storm Warning remaining is along the east coast of Florida south of the Volusia-Brevard County line to the Card Sound Bridge.

According to the NWS Melbourne office, Fort Pierce has received 2.89 inches of rain, breaking a 1936 record.

A Flood Advisory for the Treasure Coast continues until 11:30 a.m. with the possibility of an extension.

What to do after your car is flooded 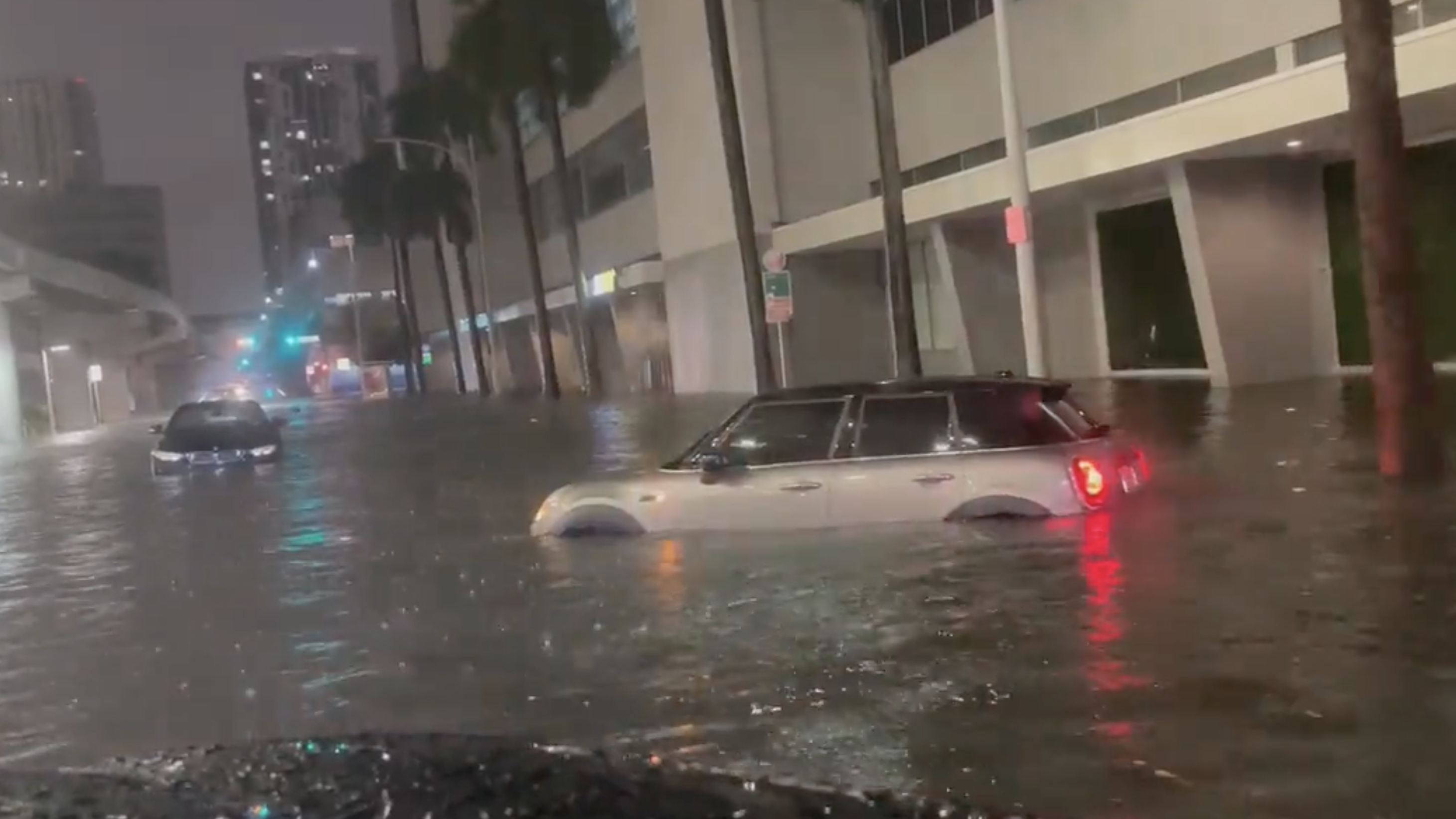 LEARN
Here's what to do after your car is flooded
A disorganized tropical system dumped heavy rain across South Florida on Friday and Saturday, triggering flash flooding in the Miami area after several inches of rain had fallen, leaving several people stranded as their cars became submerged in floodwaters. Now, they're wondering how to start the insurance process.

Heavy rain across South Florida has triggered flash flooding in the Miami area, leaving several people stranded as their cars became submerged in floodwaters. Now, they're wondering how to start the insurance process.

Motorists are asked to avoid the area near Oakes and Burris roads in Davie, Florida due to flooding.

A Flash Flood Warning is in effect for parts of South Central Broward County until noon.

FOX Weather Meteorologist Steve Bender is in Naples where about 5 inches of rain has fallen in the past 24 hours. More rain is forecast as Potential Tropical Cyclone One is expected to move across Florida Saturday.

Couple describes swimming away from flooded car in Miami

FOX Weather's Brandy Campbell talked to a couple visiting from California were in an Uber when their car became overcome with water and they had to swim away and flee. They say it was "pretty scary."

Disturbance never organizes, but flooding rains move in as forecast

The tropical disturbance we have been tracking in the Gulf has been unable organize itself. In fact, strong upper-level winds have pushed dry air into the system completely gumming up its works from a tropical-development standpoint.

The system is still technically called Potential Tropical Cyclone One, and it still might develop into Tropical Storm Alex. But that wouldn’t happen until the it’s well east of Florida and moving out to sea.

A band of torrential rain caused widespread flooding up to waste deep in the Miami area overnight with other areas nearby were also affected. The National Weather Service radar in Miami shows that a north-south swath of intense thunderstorms dumped 6 to over 12 inches of rain from Hallandale Beach, which is just south of Fort Lauderdale, down I-95 through Miami to the Upper Florida Keys. Three to 5 inches came all at once.

Another north-south band of rain covered Southwest Florida including Fort Myers and Naples, but the heaviest part of that band stayed offshore.

Winds are still estimated to be as high as 40 mph in some of the bands, but over the water. There is no significant wind threat over land, although the winds will still be gusty in exposed areas, on elevated roadways, and around high-rise buildings.

The band of extremely heavy rain in Southwest Florida is forecast to move across the state today as the whole system migrates east. Some areas on the southeast coast will get a break for a while, but more heavy rain will likely move through later.  By this evening, the significant weather should be past the state. It will take until tomorrow to clear the Bahamas.

Some gusty winds and perhaps a few embedded tornadoes are possible with this last intense band of thunderstorms.

A rule of tropical-weather forecasting is, forecasts for disorganized, just developing, or slow-moving systems are subject to large errors and are likely to change. This disturbance was proof of that rule.

In the end, the weather forecast was quite good, but the structure of the system never came together. If it had, the flooding could have been worse.

The US National Weather Service issued a Tropical Storm Warning for Florida as motorists experienced poor visibility and heavy rain on Friday.

Twitter user PhotographicFloridian recorded a video of almost blinding rain on I-75 where visibility was minimal.

Nearly a foot of rain has fallen in South Florida

The Community Collaborative Rain, Hail and Snow Network reports a whopping 9 to 10 inches of rain has fallen across South Florida in the past 24 hours.

There is a low-end threat for tornadoes as a tropical system moves across Florida on Saturday. Waterspouts are also a concern.

City of Miami Fire Rescue has deployed six high water vehicles to help rescue people in their cars that are stranded in flood waters.

"We continue to urge you to not drive or walk through standing water," the department said in a tweet Saturday morning.

5,000 without power in Florida

The National Weather Service in Miami has extended the Flash Flood Warnings in southeastern Florida until 7 a.m. EDT. This includes Miami and Fort Lauderdale.

Between 2 and 8 inches of rain have fallen so far, and additional rainfall amounts of 1 to 3  inches are possible in the warned areas.

Nearly 5.5 inches of rain has fallen in Marathon, Florida, from Potential Tropical Cyclone One.

The old daily record was 2.84 inches in 2013. It is the 12th highest single-day rainfall total on record.

Winds will increase as the system moves across Florida. Gusts up to 50 mph are likely through the afternoon on Saturday.

City of Miami Fire Rescue has been responding to multiple calls of cars stuck in the water on Saturday.

NHC: Potential Tropical Cyclone could strengthen after it exists Florida

A tropical disturbance continues to spread heavy rainfall and gusty winds across Florida, Cuba and the Bahamas, but meteorologists say the system is disorganized and likely won't form into a cyclone until it reaches the Atlantic Ocean.

As of Saturday morning, the tropical disturbance is less than 100 miles off the coast of Southwest Florida, in the Gulf of Mexico.

The system is tracking northeastward at around 18 mph and on its current projection will pass over the Sunshine State on Saturday and exit into the Atlantic Ocean, where it could finally organize into a tropical storm. 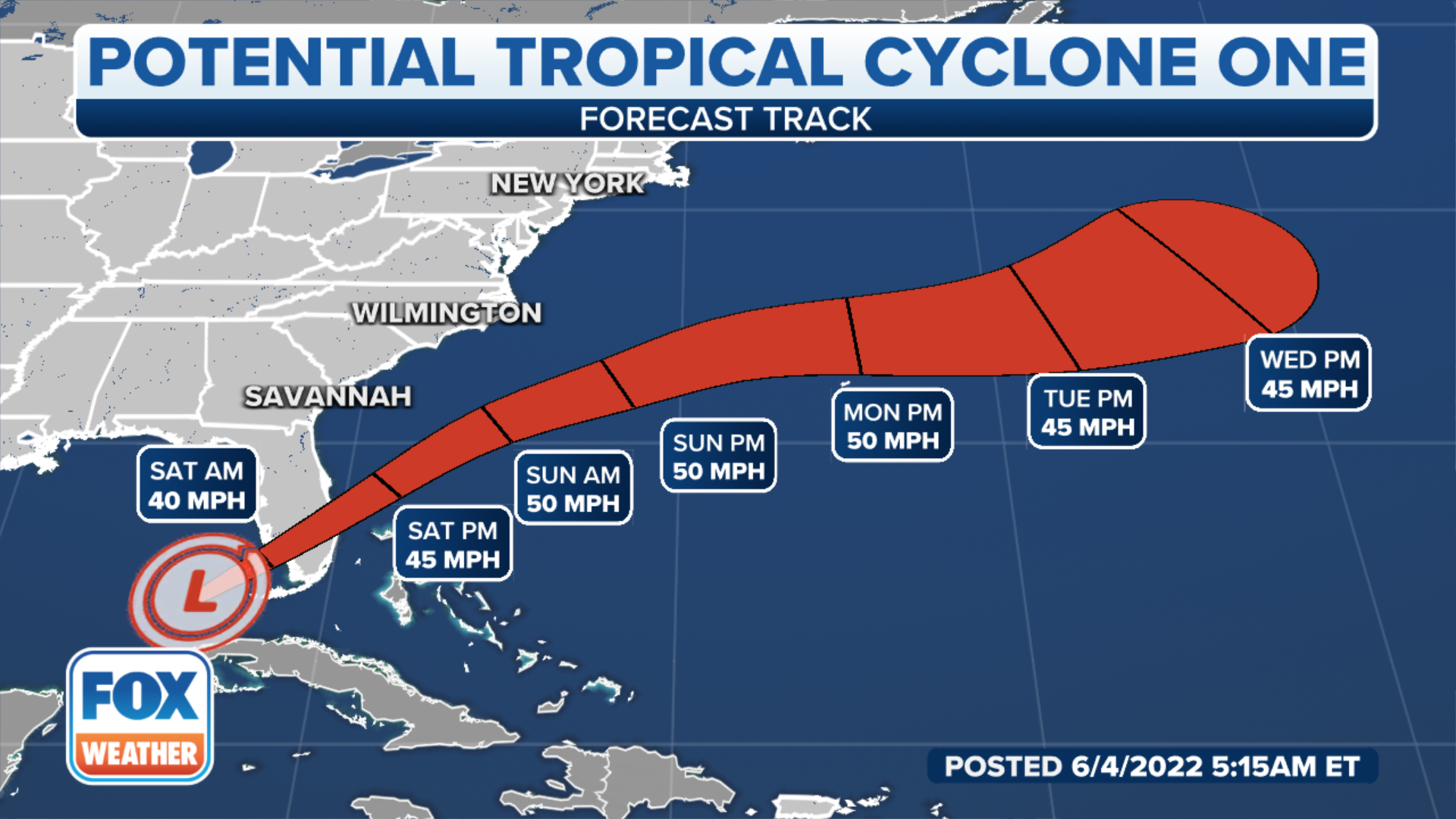 WEATHER NEWS
Disorganized tropical system producing heavy rains over South Florida
This system will make landfall in southwestern Florida on Saturday morning and then move northeastward across central and southern portions of the Florida Peninsula, bringing heavy rain and gusty winds to those areas.
Posted by Chris Oberholtz Share