33Posts
Back to Top

The tropical disturbance is expected to cross the Florida Peninsula on Saturday.

A threat of tornadoes and isolated flooding will continue overnight.

VIDEO: Torrential downpours along I-75 in South Florida

Off and on rain is expected to continue through the evening in South Florida as the rain shield associated with Potential Tropical Cyclone One moves through.

Rain to come to an end by Saturday evening

The heaviest rain associated with the tropical disturbance will be off the Florida East Coast by Saturday evening. Scattered storms will be possible into the workweek, but they won't produce the flooding downpours that the area saw from the tropical system.

The 8 p.m. update from the National Hurricane Center shows no major changes to the forecast for Potential Tropical Cyclone One.

Officials in Brevard County are closely watching the radar for heavy rain.

The FOX Weather 3D Radar is picking up tropical downpours throughout the Keys and South Florida. Meteorologists expect the wet weather to continue through the night.

Track the tropical system on the FOX Weather app.

According to the office of the Cuban President, at least two people have died as a result of the tropical weather and a third is missing. Heavy rainfall across the island has increased the landslide threat.

Coastal areas of South Florida could see a storm surge of up to 3 feet.

Boaters: Time to get out of the water

The U.S. Coast Guard has elevated to port condition Whiskey, meaning sustained winds between 39-73 mph are possible within the next 72 hours.

"We encourage boaters to monitor the radio for safety broadcast information, secure all loose gear, and find the best course back to shelter if out in the water," the USGC Southeast tweeted. 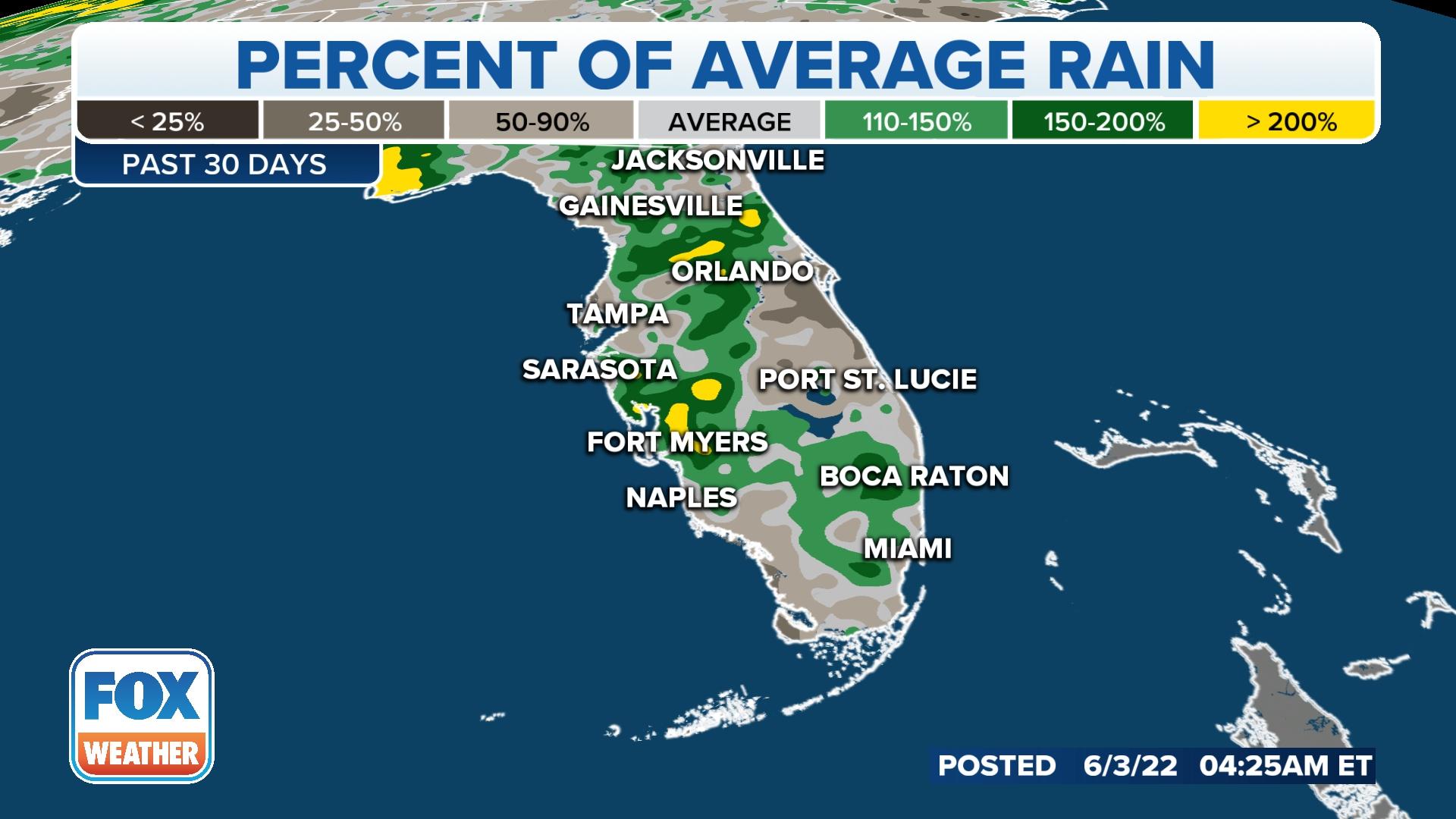 The biggest impacts will be widespread heavy rain and wind. Already water-logged South Florida doesn't need any more rain but in parts of Central and North Florida it could be a welcome sight.

Off and on flooding has been reported in South Florida as bands of and on continue. Parts of Miami Dade County could see upwards of around half a foot of rain before the tropical system moves out of the Atlantic.

The highest wind gust so far from the tropical disturbance was measured at 47 mph in the Tampa Bay region. Winds have also gusted to 40 mph in the Keys. Wind gusts in the 40s can knock small branches and lead to minor power outages.

Winds are expected to remain elevated thru at least Saturday: Latest Forecast

Lightning from Potential Tropical Cyclone One seen from space

NOAA's GOES-16 satellite is following Potential Tropical Cyclone One using its suite of instruments, including a lightning mapper. See the lightning from the system below.

FOX Weather Meteorologist Steve Bender is in Southwest Florida on Marco Island where roads are covered in water. Significant rainfall is expected through Sunday and Flood Watches are in place for all of South Florida.

People fill sandbags in Pembroke Springs, Fla., as they prepare their homes for the expected arrival of a Tropical Storm. (Photo: Joe Raedle/Getty Images)

People fill sandbags as they prepare their homes for the expected arrival of a Tropical Storm on June 03, 2022 in Pembroke Pines, Florida.

The National Hurricane Center has designated it a Potential Tropical Cyclone which allows them to issue their full suite of products like watches, warnings and forecast cone, before a storm has fully become a tropical depression or storm.

The storm is expected to become a tropical depression or storm later today or tonight.

Regardless of strength, heavy rain and life-threatening flooding are all but certain in South Florida and will be the main threat with this system.

A widespread 5-10 inches of rain is expected, and some areas could get up to one foot of rain.

Dangerous heavy rain will begin this evening and last into the overnight hours; rain rates could exceed 3 inches per hour.

A few tornadoes could quickly spin up, especially in the Florida Keys.  This will be most likely Friday afternoon into Saturday morning.

Overall, it may well be dangerous to be on the roads in the southern part of Florida Friday into the daytime on Saturday. Residents should consider changing their plans so they are home during the gustiest and rainiest part of the storm.

It is likely that 1-3 feet of storm surge is expected in South Florida. This may result in minor flooding right along the coast but significant impacts are not expected.

2 p.m. EDT UPDATE: Aircraft data from the National Hurricane Center indicates disturbance from Potential Tropical Cyclone One has changed little in organization during the past several hours.

Wind speeds are currently 40 mph and moving northeast at 5 mph.

The storm is located 395 miles southwest of Ft. Myers, Florida and 150 miles north-northeast of Cozumel, Mexico.

Steady rain for now in Palm Beach, much more on the way

FOX Weather's Will Nunley is in Palm Beach, Florida, on Friday with the latest on the incoming storm.

The FOX Weather Beast is in South Florida to track Potential Tropical Cyclone One as it approaches landfall. Watch and follow along on the Facebook Live below.

New to Florida? How to prepare for your first hurricane season

From sandbags, flushing without power and evacuations, here's everything you need to know during your first hurricane season. EXTREME WEATHER
New to Florida? Here’s a guide to help prepare for your first hurricane season
Did you recently move to Florida and the start of hurricane season has you feeling unsure about your re-location?
Posted by Chris Oberholtz Share

What is a potential tropical cyclone?

Tropical depression, tropical storm and hurricane are terms you hear every hurricane season, but "potential tropical cyclone" is a relatively new phrase with which you might not be very familiar.

Introduced by the National Hurricane Center in 2017, a potential tropical cyclone permits the NHC to issue routine advisories on a system that has not yet developed into a tropical depression or tropical storm but brings a threat of 39-plus-mph winds to land within 48 hours. 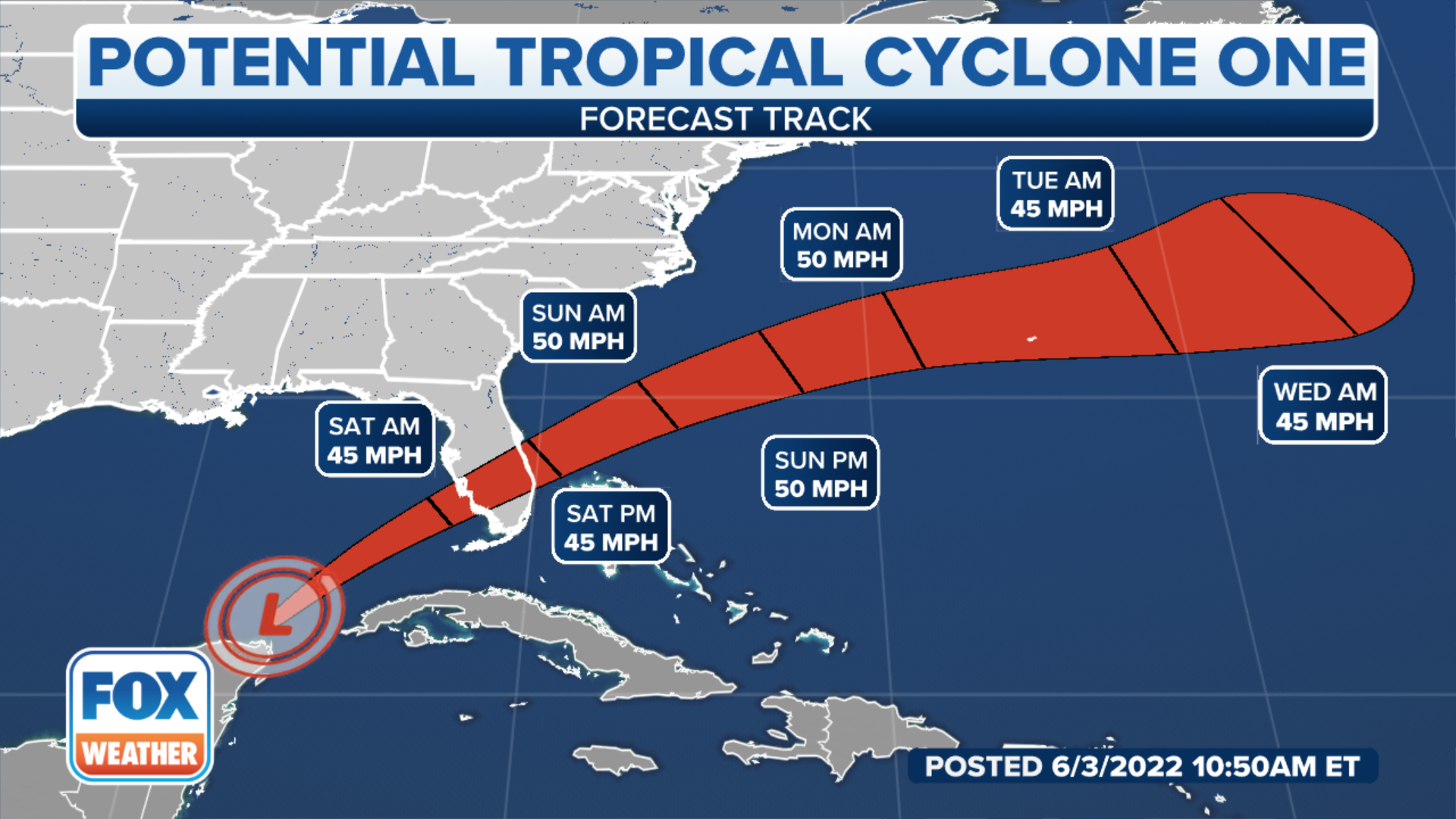 LEARN
What is a potential tropical cyclone?
You might not be familiar with this relatively new terminology used during hurricane season.
Posted by Chris Oberholtz Share

As of midday Friday, this developing system located more than 400 miles southwest of Fort Myers, Florida, was producing clusters of showers and thunderstorms.

Bands of rain and gusty winds had already arrived in parts of South Florida and the Florida Keys as tropical moisture streams well to the northeast of the system's center.

Tropical Storm Warnings have been issued across Central and South Florida as Potential Tropical Cyclone One begins to spread heavy rain and gusty winds onshore in the Sunshine State. 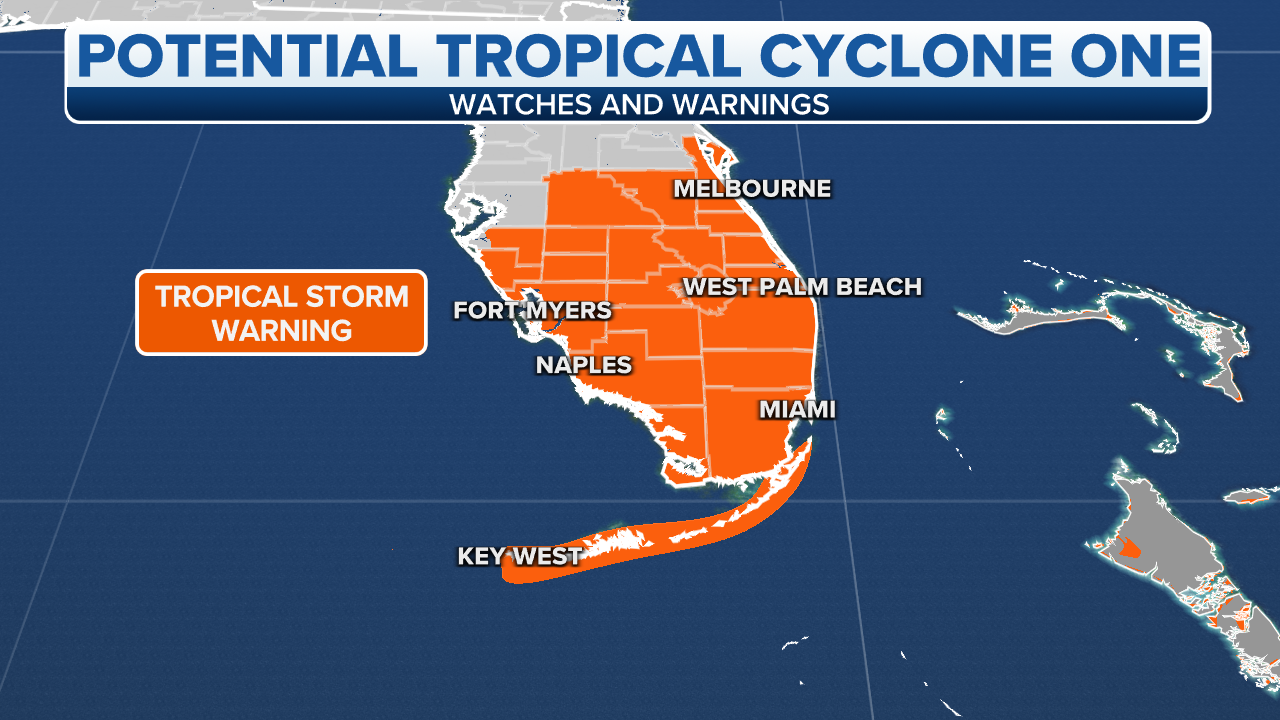 'This is gonna be a long hurricane season ahead of us'

Take a listen to Patrick Fuller with the Charlotte County Emergency Management as he discusses the Tropical Storm Warning for Charlotte County, Florida, and how they're preparing.

In preparation for the potential of major flooding, Miami city officials are distributing sandbags to help homeowners.

Sandbags are available at these locations while supplies last until 7:30 p.m. EDT Friday:

Residents in Fort Lauderdale can get sandbags while supplies last at Mills Pond Park. You need to bring your own shovel and show proof of residency.