56Posts
Back to Top

Several counties in northeast Alabama are under a Tornado Warning. Doppler radar indicated a severe thunderstorm capable of producing a tornado was near Stevenson, Alabama and was moving eastward at 45 mph.

Tornado sirens are going off in Huntsville, AL ahead of a storm with a potential of producing a tornado, along Interstate 565.

A Tornado Warning has been issued for several counties in northern Alabama including the Huntsville area. Doppler radar indicated the severe thunderstorm capable of producing a tornado was located near Decatur, moving east at 50 mph.

A new tornado watch box has been issued for parts of AL, TN and GA

Tornado Watches are now in effect for nearly 6 million people across the Southeast. The Storm Prediction Center issued the 7th watch of 2022 after 7:30 p.m. for counties in Georgia, Tennessee, Alabama and North Carolina.

The newest watch box is in effect until 3 a.m. EST.

The National Weather Service in Louisville plans to send out several survey teams to determine how many tornadoes traveled through southern and central Kentucky on Saturday.

PowerOutage.US reported more than 4,600 customers in the Bluegrass State were without power as of Saturday evening.

Radar is tracking a storm with rotation that is near Huntland, Tennessee. The storm is moving east at 45 mph. Other locations impacted by this storm include Elora, Maxwell, Beans Creek, Plevna and Flintville.

The Tornado Warning that was issued for areas around Columbus, MS has been allowed to expire. Traffic cameras show heavy rains are now falling over the region.

Forecast models show off and on rain will continue overnight before a cold front helps to clear out parts of the Southeast.

Several counties in eastern Mississippi are under a Tornado Warning until 6:30 p.m. CDT. The radar indicated rotation is moving northeast at 45 mph.

Meteorologists advise residents to move to a basement or an interior room on the lowest floor of a sturdy building.

The threat of strong to severe thunderstorms will shift eastward on Sunday and include areas from the Gulf Coast into the Carolinas.

Nearly 8 million Americans are under a Tornado Watch. A watch means conditions are favorable for storms to have rotation and produce a tornado.

What you should do to prepare for tornadoes: CLICK HERE

Meteorologists are watching a storm near I-65 for the potential of producing a tornado near the Alabama-Tennessee border. The storm is moving northeast at 50 mph.

FOX Weather futurecast for after midnight.

Even though Birmingham, Alabama will see rain before midnight, a significant line of storms likely won't impact the area until late Saturday and during the overnight hours. FOX Weather's futurecast shows what could be strong to severe storms moving eastward through central parts of the state around 12:30 a.m. CDT.

Gov. Beshear declared a state of emergency due to the threat of tornadoes and flash flooding across multiple counties of the Bluegrass State.

The state of emergency comes less than a month after a tornado outbreak impacted the state on December 10, 2021.

FOX Weather's Steve Bender explains what to do if a tornado is threatening your neighborhood.

About 10 homes are damaged, power lines and trees down, and reports of minor injuries.

@ChadMardis on Twitter shared this photo on Twitter of storm damage in the Woodhill subdivision in Taylor County, Kentucky.

The current Tornado Watch now stretches further to the west and includes portions of northern Louisiana, Mississippi, and southern Arkansas.

The Floyd County Sheriff's Department, in Prestonsburg, Kentucky, posted this photo to Facebook on Jan. 1, 2022, showing flooded roads on Route 1426 at Harold near Tan Yard Hollow.

Storm damage has been reported at Thornton Furniture in Bowling Green, Kentucky.

98.7 WHOP FM in Hopkinsville, Kentucky, reports significant damage from a possible tornado on the east side of the town near East Ninth and Campbell streets. No immediate reports of significant injuries.

Just over 3.2 million people are currently under a Tornado Watch as the severe weather picks up in the Tennessee and Ohio valleys.

If you are in any of the areas at risk for severe storms this weekend, make sure you have severe weather alerts turned on in your  FOX Weather app so you can receive potentially life-saving warnings issued by the National Weather Service.

More than 31,000 without power in Kentucky, Tennessee

The severe weather threat has shifted out of Western Kentucky but continues further to the east in Kentucky and Tennessee, the National Weather Service said.

A Tornado Warning has been issued for Bowling Green, Auburn and Plano, Kentucky, until 12:15 p.m. Central.

A Tornado Warning continues for Corinth, Kentucky, until 11:45 a.m. Central.

A Tornado Warning has been issued for Guthrie and Allensville, Kentucky, until 11:45 a.m. Central.

A Tornado Warning continues for Edmonson and Hart counties in Kentucky until 11:30 a.m. Central.

A Tornado Warning has been issued for Russellville, Corinth and Middleton, Kentucky, until 11:45 a.m. Central.

Russellville was hit with an EF-3 tornado during the outbreak on Dec. 11.

A Tornado Warning has been issued for Allensville, Kentucky, until 11:30 a.m. Central.

A Tornado Warning has been issued for Mammoth Cave, Kentucky, until 11:30 a.m. Central.

A Tornado Watch has been issued for parts of Kentucky and Tennessee until 7 p.m. Eastern.

A Tornado Warning has been issued for Todd County, Kentucky, until 11 a.m. Central.

3-5 inches of rain recorded in Kentucky

Parts of central Kentucky have already received 3 to 5 inches of rain since midnight.

Footage by Johnnie Nicholson shows a stormy sky in the early hours of Saturday.

Timelapse footage captured on New Year’s Day shows stormy weather rolling over London, Kentucky, as the National Weather Service warned of severe thunderstorms in the area with winds of up to 70 mph, large hail, and possible tornadoes.

Footage by Johnnie Nicholson shows a stormy sky in the early hours of Saturday.

The storms will continue to move east overnight, and portions of the Deep South will see a risk for some severe storms into Sunday.

In addition to the severe weather, flash flooding is a major concern, with the greatest threat from Arkansas through eastern Kentucky.

Storms will likely track over the same areas dropping as much as 2-5“ of rain in a short time. This will lead to widespread instances of flash flooding as well as river flooding even after the rain ends.

The National Weather Service's Storm Prediction Center said an enhanced risk of severe weather is forecast today across parts of the Southeast. Damaging winds and tornadoes, a couple of which could be strong, will be possible through early tonight, especially across the Tennessee Valley.

A Tornado Warning has been extended for Pulaski County in south-central Kentucky.

Tornado Warning has been issued for areas in Kentucky including Somerset, Science Hill and Nancy until 7:30 a.m. Eastern.

Meteorologists are watching areas from Arkansas to Ohio for the potential of flash flooding. Thunderstorms are expected to continue through sunrise and produce torrential rainfall.

Doppler radar indicated rotation in a storm north of Paris, Tennessee around 2 a.m. CDT. Weakley and Henry counties were placed under a Tornado Warning. In addition to the tornado threat, the storm was capable of producing torrential rainfall.

A Tornado Warning has been issued for Weakley and Henry counties in northwestern Tennessee. The storm is moving to the northeast at around 50 mph.

Thunderstorms across northern Arkansas are training over some of the same areas. This means the storms are producing tremendous rainfall and leading to flash flooding. Rainfall of more than 2 inches has been reported with at least 2 more inches on the way before sunrise.

7 facts you should know about flash floods: CLICK HERE

Thunderstorms with damaging winds and lightning will be likely late Saturday in northern Georgia. Areas north of the Atlanta-metro are under an enhanced risk for seeing severe thunderstorms.

The storms will be the second round of severe weather within 24 hours for the Peach State: READ MORE

Nearly 30 million Americans are under a severe weather threat on New Year’s Day for the potential of thunderstorms producing large hail, damaging winds and tornadoes.

Storms are developing across Arkansas and the Tennessee Valley and will slowly head eastward, where the atmosphere is more prime for development.

A Severe Thunderstorm Watch and a Tornado Watch are in effect for the parts of the region until around sunrise.

More than 3.3 million residents across four states are under a Tornado Watch until 7 a.m. CDT. Meteorologists say strong to severe thunderstorms are expected to develop and move into the region before sunrise.

A Tornado Watch means conditions are favorable for twisters in and close to the watch area.

What you should do to prepare for tornadoes: CLICK HERE

Radar of heavy rains over the South

Doppler radar indicates storms over eastern Oklahoma and western Arkansas are producing rains of 1 to 2 inches per hour. Additional rainfall is likely over the next few hours and localized flash flooding could occur.

A Flash Flood Warning is in effect for Yell, Logan, Polk and Scott counties in Arkansas.

7 Facts you should know about flash floods: CLICK HERE

Several modes of severe weather are likely in northern Alabama later on Saturday. Tornadoes, hail, damaging winds, lightning and heavy rains will all be possible ahead of significant cold front.

The Storm Prediction Center issued a Severe Thunderstorm Watch for areas of Texas, Oklahoma and Arkansas until 6 a.m. CDT.

Meteorologists warn damaging wind gusts to 70 mph, large hail and an isolated tornado is possible during the overnight hours.

Strong to severe thunderstorms are expected to continue to develop and strengthen as the storm system works its way eastward.

Download the FOX Weather app now to track the storms.

What you should do to prepare for tornadoes 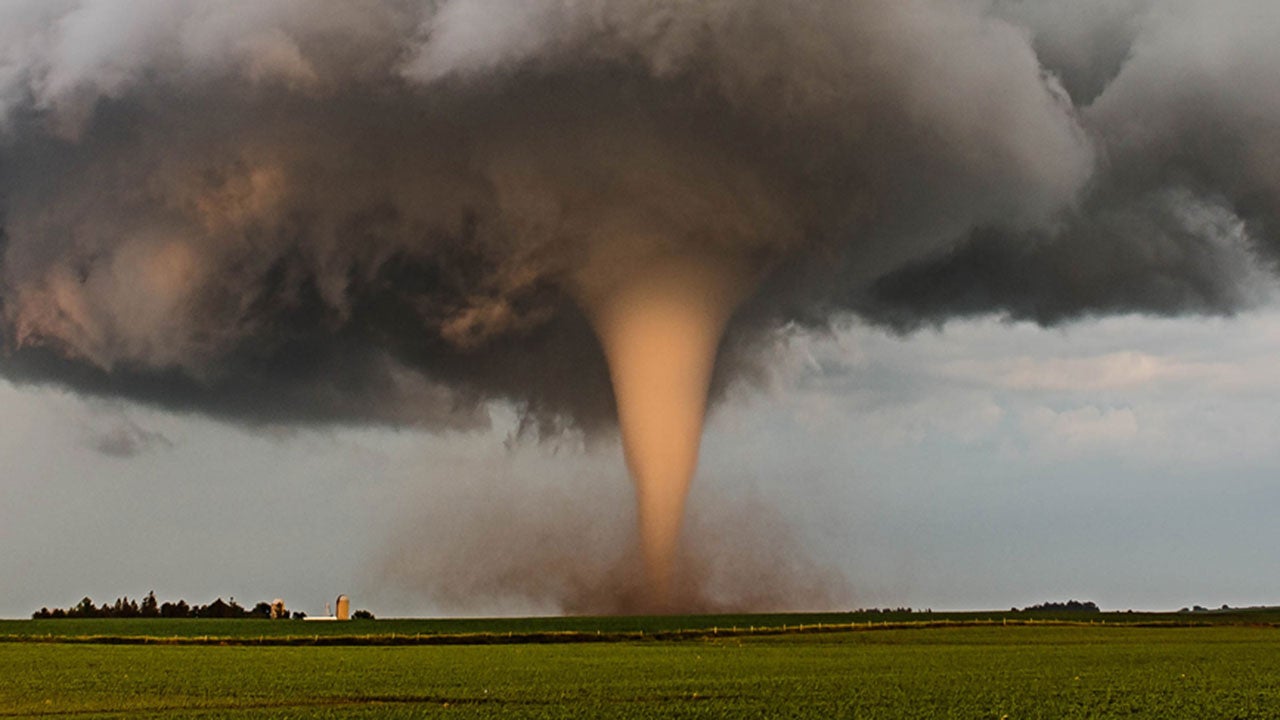 LEARN
What you should do to prepare for tornadoes
Forecasters can generally forecast the threat of tornadoes, but where they touch down is still a bit unpredictable.
Posted by Andrew Wulfeck Share 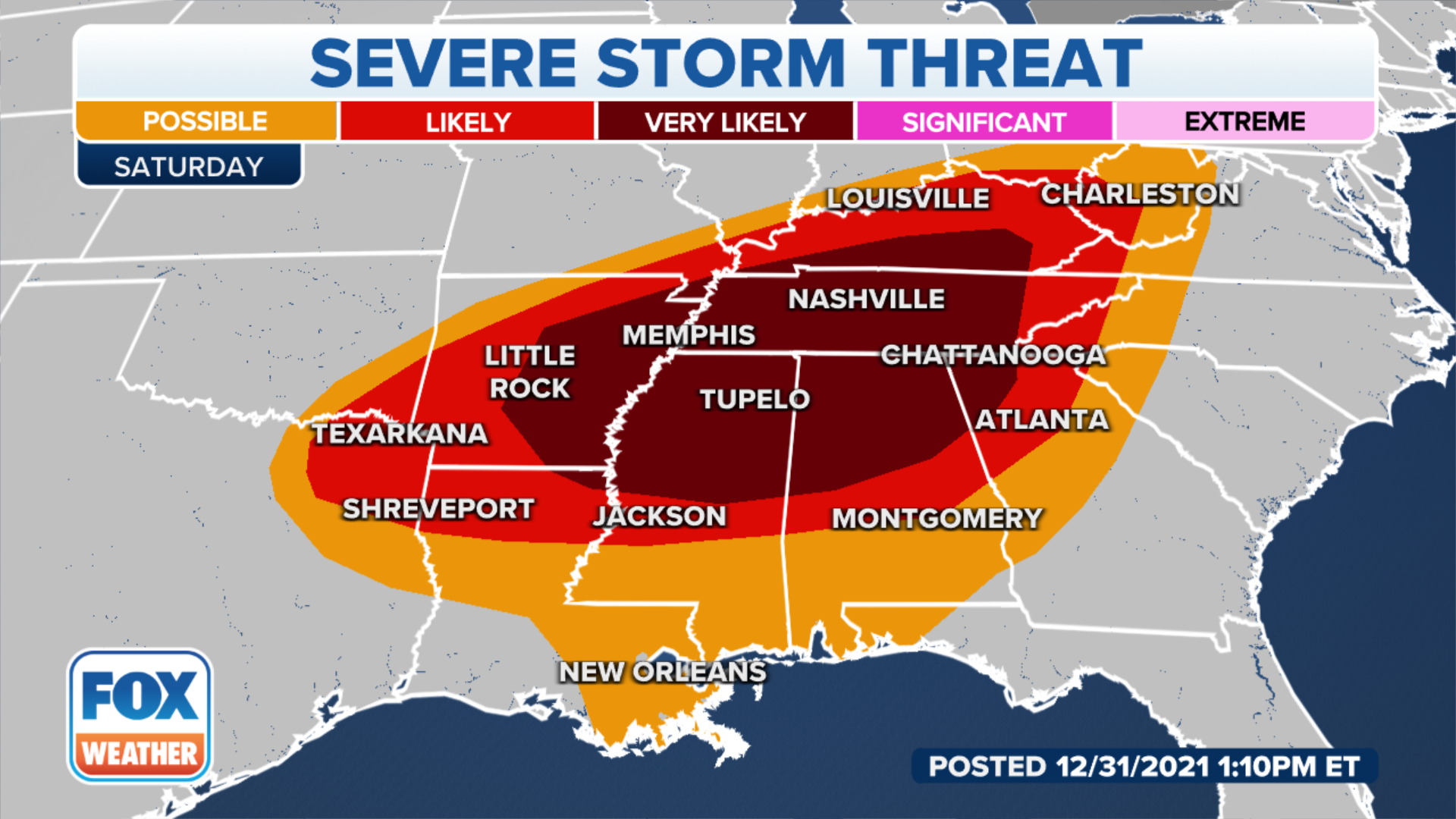