Here is a look at the forecasts for MLB Opening Day games for Thursday and Friday.

Major League Baseball's Opening Day games will be played Thursday and Friday, but rain has already forced the postponement of at least two games originally scheduled for Thursday afternoon.

Due to a 99-day labor dispute between the players and owners, America's pastime is getting underway a bit later than the originally scheduled Opening Day of March 31, but each team is still scheduled to play all 162 regular-season games over the next six months.

The season's very first game was supposed to feature the classic Red Sox-Yankees rivalry on Thursday afternoon, but the New York Yankees announced Wednesday the game has been rescheduled for Friday because of rain in the forecast. First pitch at Yankee Stadium in the Bronx is now scheduled for Friday at 1:05 p.m. Eastern.

Additionally, the Opening Day game between the Seattle Mariners and Minnesota Twins at Target Field in Minneapolis has been postponed until Friday as well, the home team announced on Wednesday. There, snow is in the forecast in the Twin Cities on Thursday, when the game was originally scheduled to be played.

HOW WEATHER CAN HELP YOUR BASEBALL TEAM WIN – OR LOSE

Here's a look at the forecast for some of the other ballgames around the country on the first two days of the season. 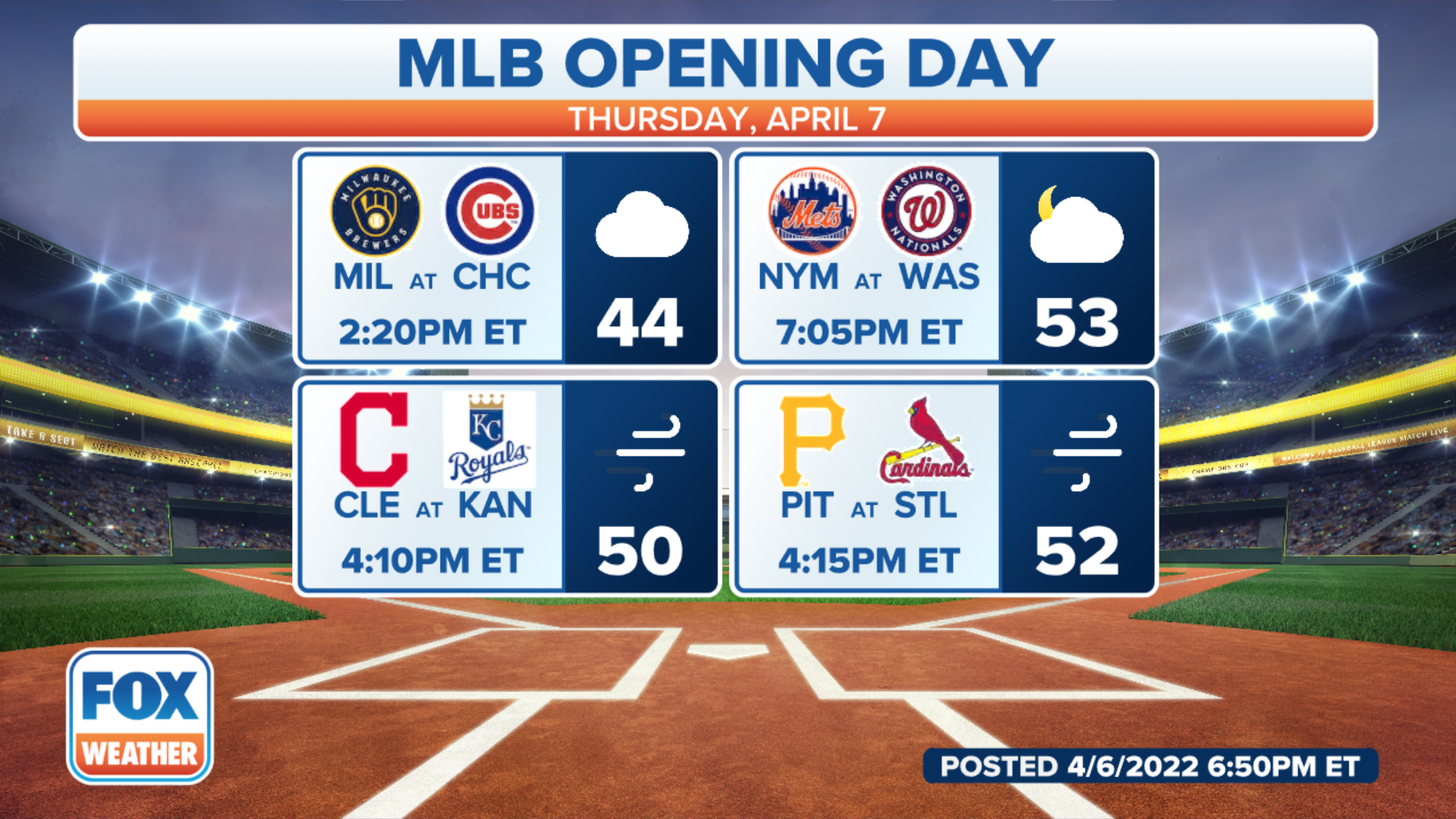 The weather could be a factor Thursday in the nation's capital, where rain could disrupt the game at Nationals Park between the New York Mets and Washington Nationals at 4:05 p.m. Eastern. There's a chance this matchup also ends up being postponed if the forecast doesn't improve.

Anyone visiting Wrigley Field in Chicago to check out the Midwestern matchup between the Milwaukee Brewers and Chicago Cubs at 2:20 p.m. Eastern may also encounter at least a few rain showers – in addition to chilly temperatures – though we currently don't expect a rainout. At first pitch, the temperature is only expected to be in the mid-40s, so make sure you bring a jacket or sweatshirt to keep you warm and an umbrella or raincoat to keep you dry. 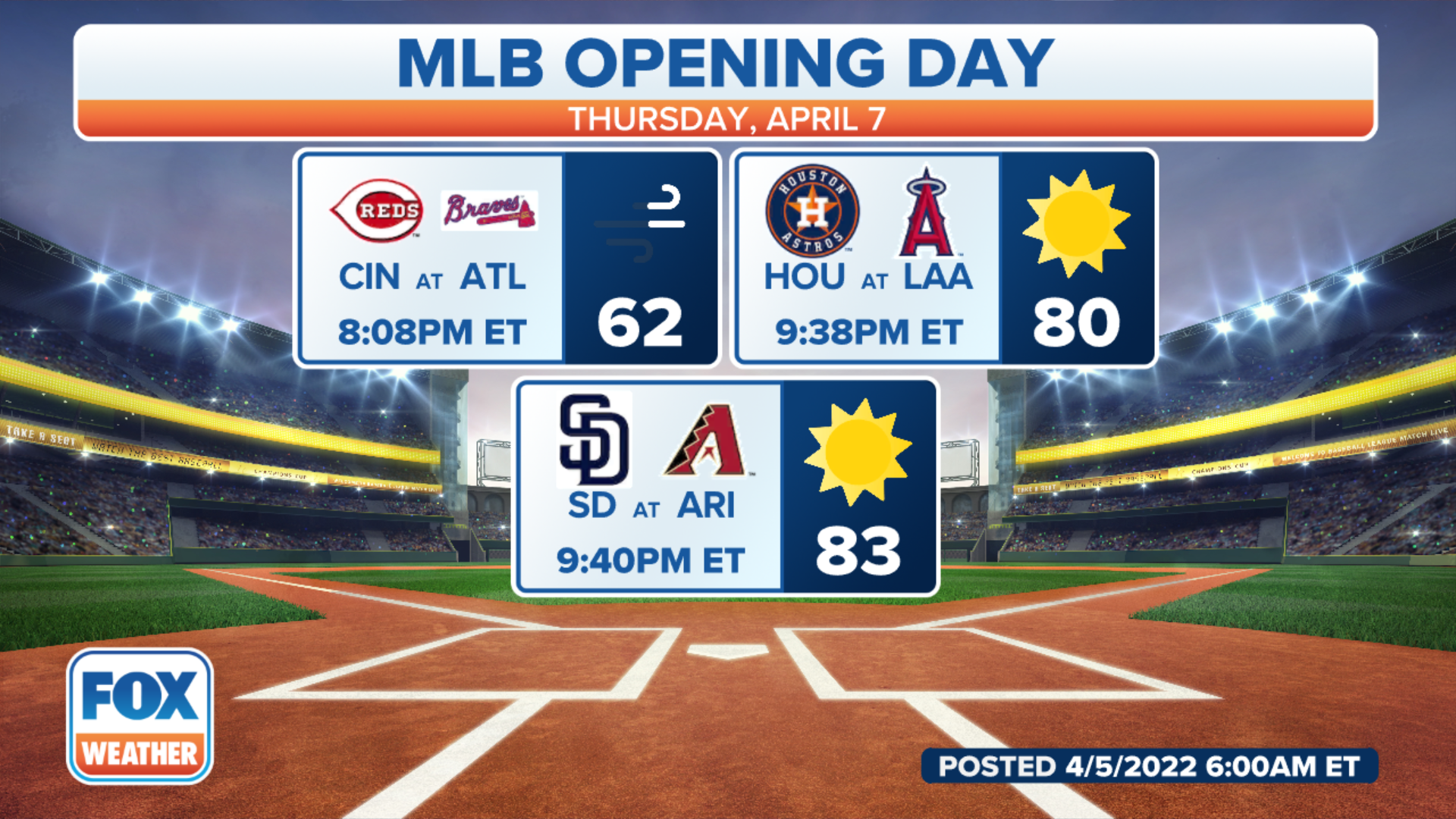 Thursday night's three games should all be rain-free.

If you're visiting Truist Park in Atlanta to cheer on the defending World Series champion Braves as they face the Cincinnati Reds, it could be a bit breezy at times as temperatures fall from the lower 60s at first pitch into the 50s by the 9th inning.

Warm, dry weather is expected for the matchup in Anaheim, California, where the Houston Astros will take on the Los Angeles Angels at 9:38 p.m. Eastern. The first-pitch temperature will be near 80 degrees.

Temperatures will be in the lower 80s at the start of the game in Phoenix between the San Diego Padres and the Arizona Diamondbacks at 9:40 p.m. Eastern. 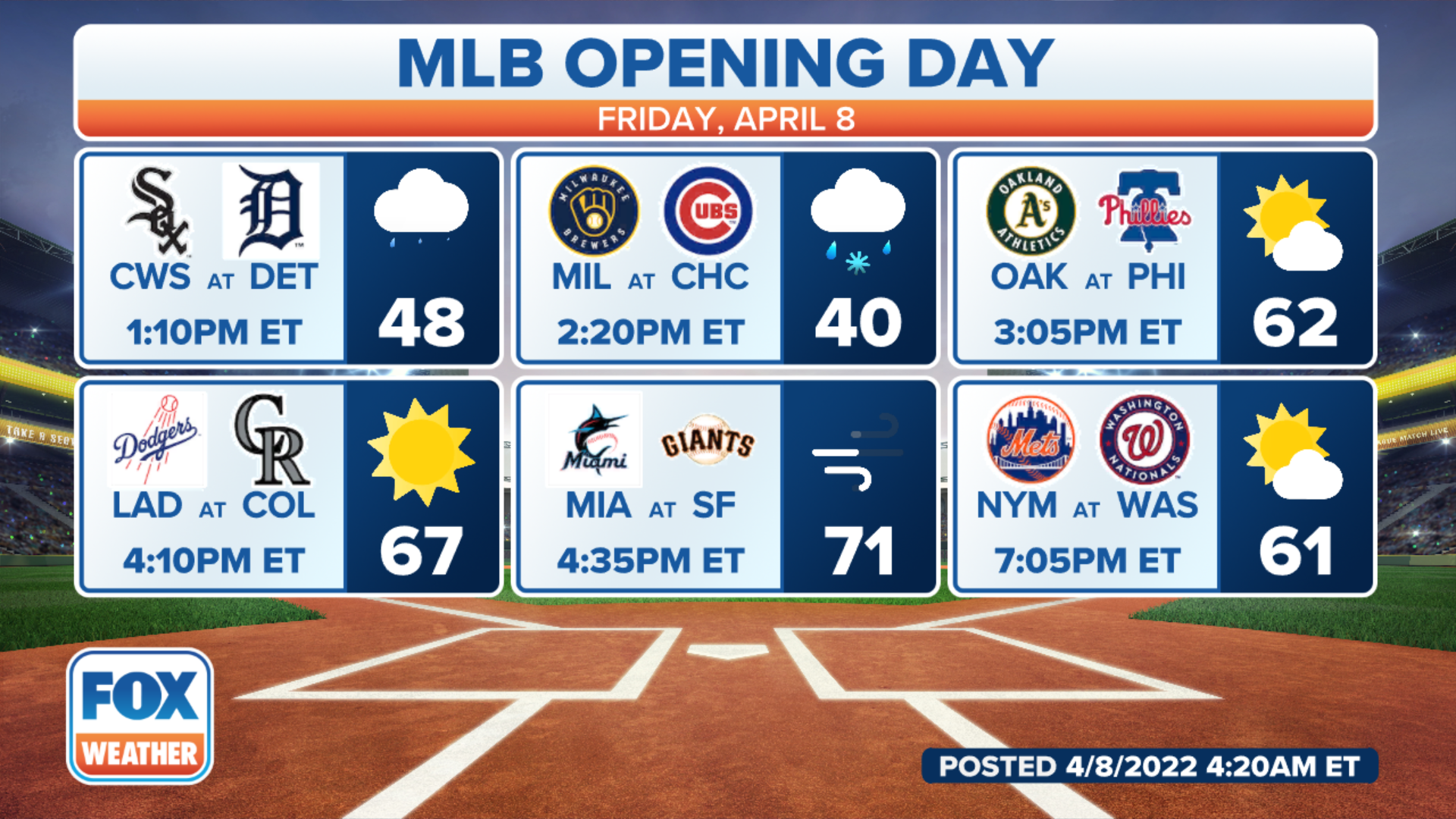 The weather looks much better for the rescheduled Red Sox-Yankees matchup on Friday at 1:05 p.m. Eastern. Temperatures at Yankee Stadium will be in the lower 60s under a mix of sun and clouds.

Similar temperatures are expected in Philadelphia, where the Oakland Athletics will take on the Philadelphia Phillies at Citizens Bank Park at 3:05 p.m. Eastern. A brief shower can't be entirely ruled out, but we don't expect any prolonged rain delays during the game.

While Friday should be rain-free in Minneapolis for the rescheduled game between the Seattle Mariners and Minnesota Twins at 4:10 p.m. Eastern, it will be quite chilly with temperatures holding steady in the lower 40s. And it will feel even colder due to wind gusts up to 30 mph. You'll want to dress warmly before you head out to Target Field.