Some locations could see heat index values as high as 115, which will greatly increase the risk for heat-related illnesses.

Extreme heat is baking much of the U.S. this week.

Triple-digit temperatures have been setting new records in several places. High humidity levels are pushing the heat index into dangerous territory, putting millions of Americans at risk of heat-related illnesses.

Nearly 115 million people from the Southwest to the Midwest and Southeast are under some type of heat alert. 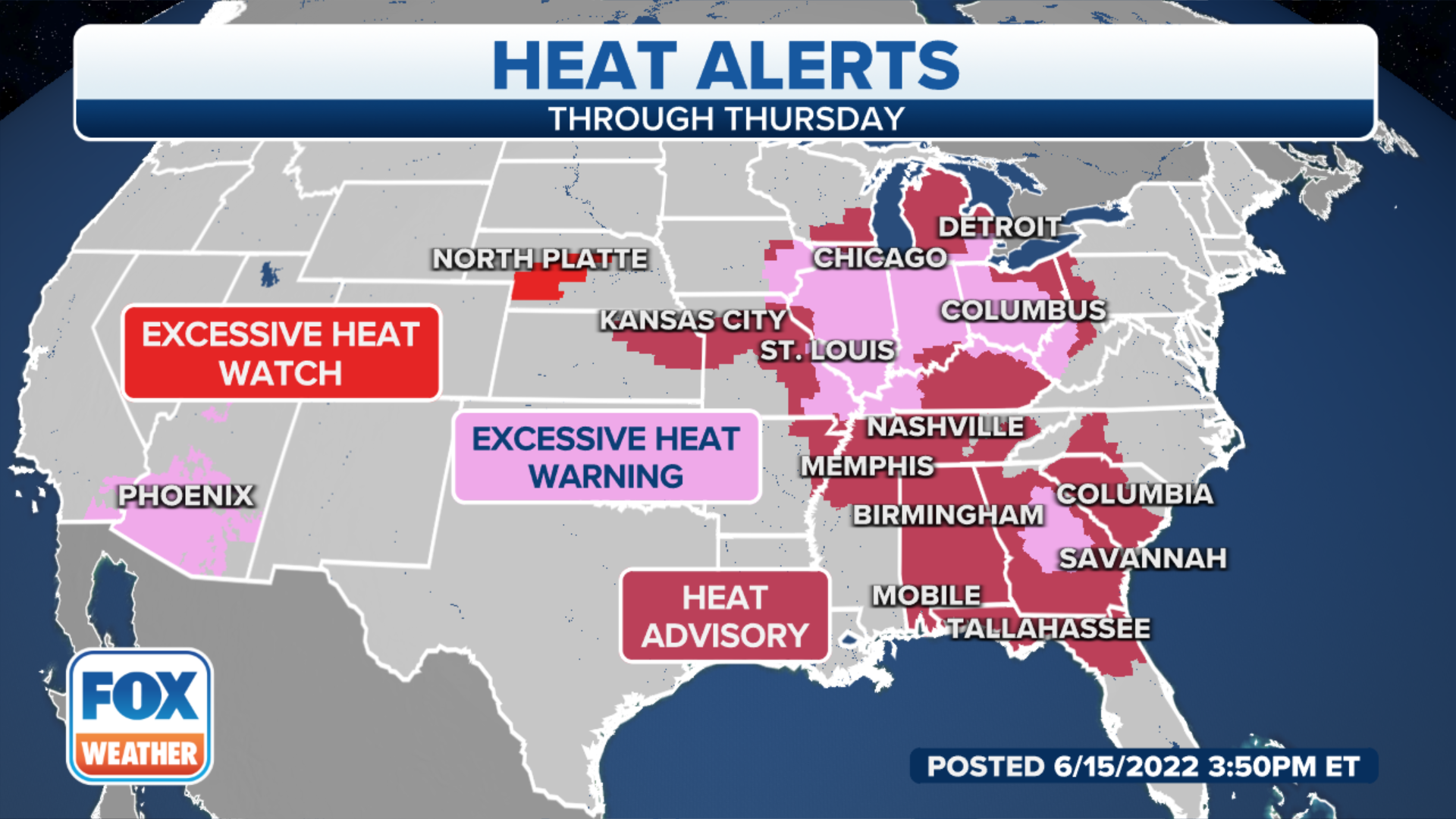 Heat alerts are in effect across the Midwest and into the mid-Atlantic and Southeast.
(FOX Weather)

From cranking up the air-conditioning to downing tons of water, people across the country are doing their best to fend off the late-spring scorcher.

Here’s a look at how the heat wave is playing out from coast to coast.

In Texas, the extreme heat led to record demand in the Lone Star State on Sunday, according to the Electric Reliability Council of Texas.

People are cranking up the air conditioning to ward off the heat in Texas.

FOX Weather’s Will Nunley said some heat-related power outages have been reported across the South, and the Tennessee Valley Authority is urging customers to do whatever they can to cut back on their electricity demand during the hottest times of the day.

Power companies across the Southeast are urging customers to conserve energy when possible, as temperatures soar and demand increases. FOX Weather multimedia journalist Will Nunley is live from Pickwick Dam in Tennessee with the latest.

The mercury climbed to near or above 100 degrees in many places on Monday. Add in the humidity, and that pushed the heat index to near 110 degrees for some.

Houston will see temperatures close to 100 on Monday

Houston will see temperatures close to 100 on Monday even though they are not one of the cities under any type of heat alert.

FOX Weather multimedia journalist Will Nunley is live in Nashville where a Heat Advisory has been issued as heat index values are expected to reach well over 105 degrees.

St. Louis was among several cities across the country that opened cooling centers as temperatures soared to just over 100 degrees Monday. These centers are meant to give people who may not have regular access to air conditioning a place to seek shelter from the oppressive heat.

7 THINGS TO KNOW ABOUT HEAT WAVES

Some of the nation's most populated metros are at risk from a dangerous heat wave, including Chicago, Houston, Nashville, Atlanta, Charlotte, St. Louis and Dallas.

‘We could not have been more prepared’

Nashville hosted CMA Fest during the weekend, and officials at the Office of Emergency Management in Nashville said Monday they did not have many heat-related emergencies during the event.

"For CMA Fest, actually, we had a lot of hydration stations around in the festival footprint, so we could not have been more prepared," said Kendra Loney, spokeswoman for Nashville’s OEM.

How Nashville is handling the dangerous heat sweltering the East

Kendra Loney, Public Information Officer for the Nashville Fire Department and Nashville Office of Emergency Management, talks about how they are handling the dangerous heat.