First-ever 'Red Warning' for heat issued in the U.K.

The UK's weather service has issued an Amber extreme heat warning from Sunday through Tuesday as a large part of the country could see temperatures between 90 °F to 100 °F.

LONDON – An already-hot stretch of weather in England is about to get even hotter as a historic heat wave blasts parts of the United Kingdom early next week.

The U.K. Met Office has issued its first-ever "Red/Extreme Heat Warning" for central and southern England that will cover Monday and Tuesday's forecast.

The worst of the heat is expected across central and southern England, including London, with forecast highs in the 95- to 102-degree Fahrenheit range. For the first time ever, spots in the U.K. have been given a forecast high of 40 degrees Celsius (104 degrees Fahrenheit) by the U.K. Met Office for Tuesday.

The all-time record high for all of England is 38.7 degrees Celsius (101.7 degrees Fahrenheit), set in Cambridge in July 2019, according to the Met Office.

The average high temperature in London in July is 73 degrees Fahrenheit. 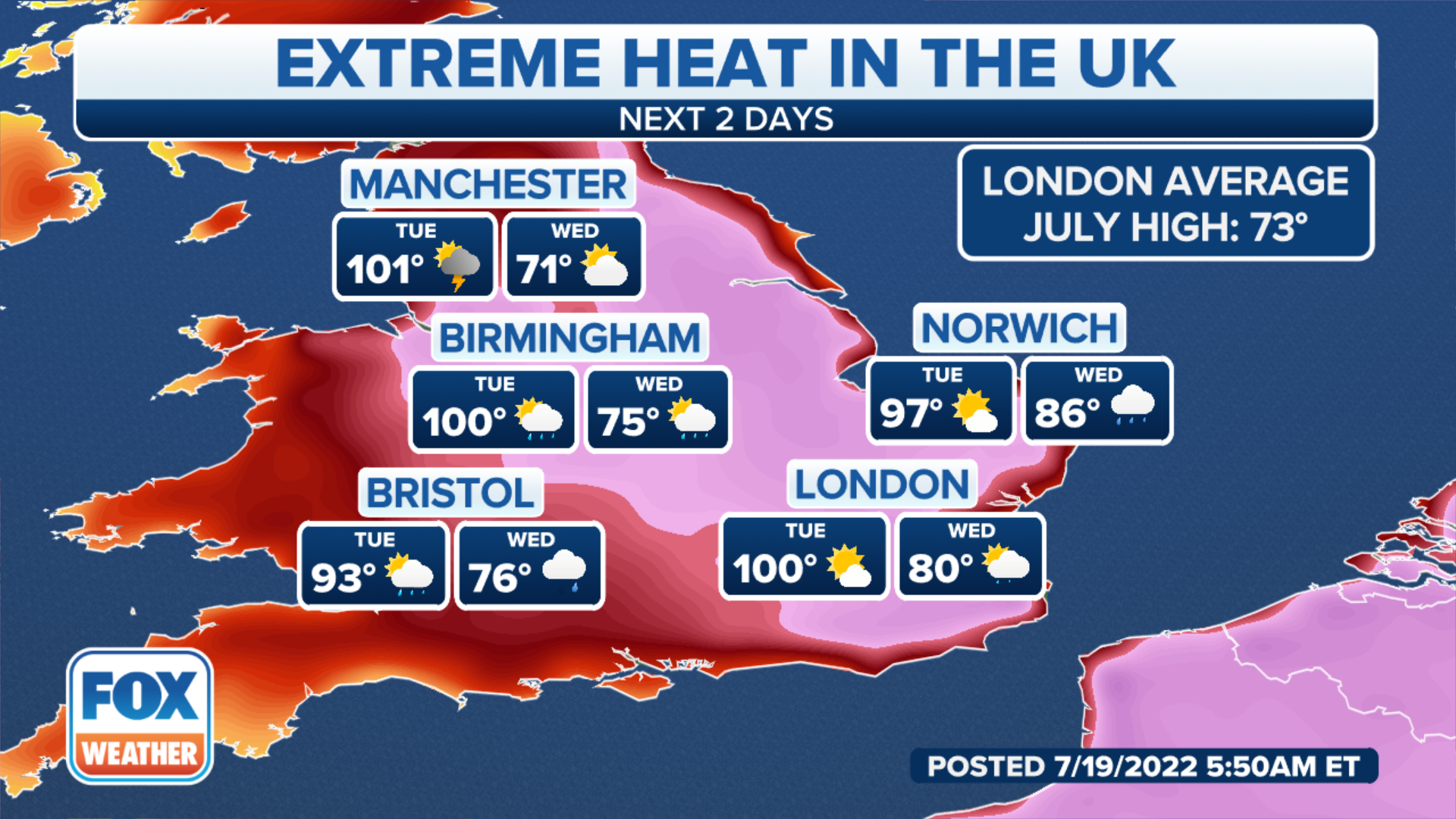 "Currently there is a 50% chance we could see temperatures top 40°C and 80% chance we will see a new (all-time) maximum temperature reached," said Met Office Chief Meteorologist Paul Gundersen. "Nights are also likely to be exceptionally warm, especially in urban areas. This is likely to lead to widespread impacts on people and infrastructure. Therefore, it is important people plan for the heat and consider changing their routines. This level of heat can have adverse health effects."

The peak of the heat is expected to begin Monday with dangerous, record-breaking heat lingering into Tuesday.

"The extreme heat we're forecasting right now is absolutely unprecedented," said Penny Endersby, Chief Executive at the Met Office. "Our lifestyles and our infrastructure is not adapted to what's coming."

High pressure has kept it very warm and sunny in the United Kingdom this week, but a developing southerly flow will push even hotter air over the European continent north into the U.K. over the weekend. Even areas in eastern Scotland could see highs in the mid-80s Fahrenheit, which is well above their summertime averages.

EXTREME HEAT: TEMPERATURES COULD REACH NEAR ALL-TIME RECORDS IN EUROPE; ROADS IN DANGER OF MELTING

Temperatures in Portugal, Spain, France and the U.K. could approach 100 degrees.

U.K. forecasters say climate change has been increasing the chances of such levels of heat waves.

"Climate change has already influenced the likelihood of temperature extremes in the UK," Dr. Nikos Christidis, climate attribution scientist at the Met Office, said in a press release. "The chances of seeing 40°C days in the U.K. could be as much as 10 times more likely in the current climate than under a natural climate unaffected by human influence." 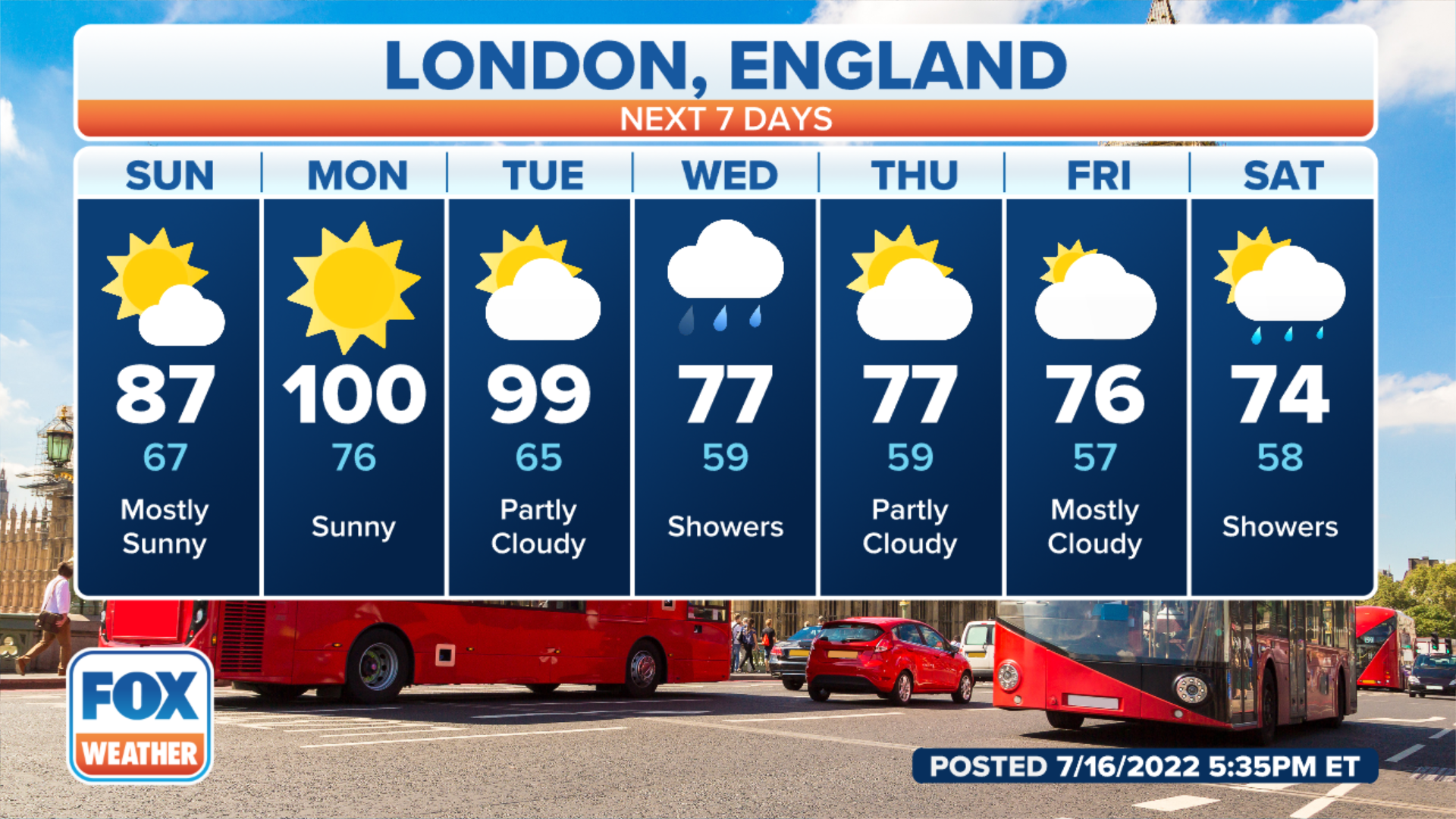 The Met Office said recent studies show the likelihood of England reaching 40 degrees Celsius at present was on the scale of an every 100- to 300-year event, but even with current pledges in global emission reductions, that frequency could drop to every 15 years by 2100.

England may join Canada in dubious distinction this decade

Forecasters are predicting relief from the heat on Wednesday as cooler air finally blows in from the Atlantic.